How fast do polyester fabrics age in the museum environment?

Aromatic polyesters were discovered in 1941by chemists of Calico Printers Association (UK) and have been commercially available since 1953. Today polyester fibres are the most widely used man-made fibres. Increasingly, fabrics are given special finishes to have specific properties (e.g. aesthetic appearance, skin-moisturising effect or spill-repellent property); these fabrics are called 'techno' fabrics1 .

'Smart and Techno Fabrics', a collaborative project between the Victoria & Albert Museum and the Textile Conservation Centre, University of Southampton, aims at investigating the deterioration of polyester fabrics in the museum environment. A plain polyester fabric and a techno polyester fabric were subjected to accelerated light- and heat-ageing and the changes in their mechanical strength were monitored using tensile tests. 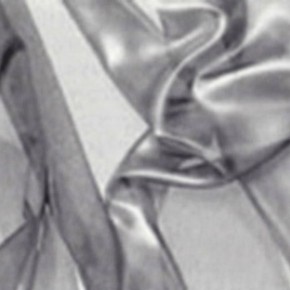 Fabric samples
The plain white polyester fabric sample was bought from the John Lewis department store, London. The techno polyester fabric,'spattering', was a replicate of a museum object (T.118:24-1998) and was provided by Nuno Corporation, Japan. This fabric is made of polyester that has been calendered mirror-smooth and 'sputter-plated' with three powdered metals (chromium, nickel and iron). This gives it a metallic shine (see Figure 1). Both fabrics were made in plain weave.

Mechanical tests
The tensile tests were conducted on an Instron machine. 19 mm wide strips of fabric were tested at a rate of displacement of 200 mm/minute with a gauge length (i.e. the length of fabric between the grips of the machine) of 75 mm. Three replicates cut along the warp and weft directions were tested every time. The load to failure and elongation to failure were measured. The results for the fabrics as received (ie, not subjected to accelerated ageing) are given in Table 1. 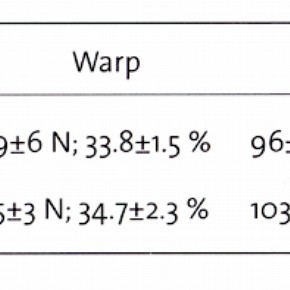 Heat-ageing tests
The polyester fabric samples were placed in an oven at 60ºC in the dark.

Effect of pleating
Many polyester fabrics have permanent heat-set pleats. For example, Nuno Corporation manufactures a pleated scarf made of polyester, which folds back together when laid flat ('Origami' scarf, see Figure 2). It was decided to investigate whether pleating introduces a zone of weakness in the fabric. Pleats were made in the middle of the strips across the length of both the plain polyester and 'spattering' samples using an iron heated to 130ºC. To see whether the pleats were permanent, samples were soaked in tap water and it was checked that the pleats were still present once they were dried (these samples were not subsequently tested). Pleated samples did not tend to fail along the pleats and their strength was similar to that of the non-pleated fabrics. This suggests that permanent heat-set pleats do not have any detrimental effects on the strength of polyester fabrics. 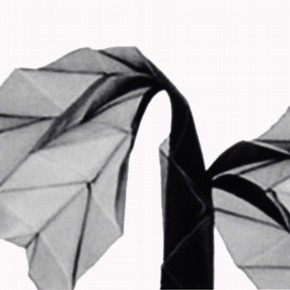 Effect of soaking
Treatments performed by textile conservators often involve using deionised water to clean fabrics. Immersing a fabric in a liquid might swell the fibres and affect their mechanical properties. Samples of plain polyester and “spattering” were soaked for ten minutes in deionised water and left to dry on a tissue. Their strength was found to be unaffected by this treatment. This suggests that cleaning treatments using deionised water do not have a detrimental effect on the mechanical strength of polyester fabrics.

Light-ageing tests
A textile on permanent display at the Museum is usually illuminated at 50 lux ten hours a day2 , meaning that it receives approximately 180 klux.h per year. Samples of plain polyester and 'spattering' (with the metal-plated side facing upward) were placed in the light box for 69 days, which is equivalent to approximately 80 years in the museum. It was observed that the strength of both the plain polyester and 'spattering' did not vary significantly during the ageing tests. These results suggested that (i) the tensile strength of polyester fabrics would not be affected after 80 years of illumination in the museum environment and (ii) the techno pre-treatment on 'spattering' did not have any adverse effect on the durability of the polyester fabric.

Heat-ageing tests
Increasing the temperature of the environment is recognised to accelerate the rate of deterioration in an object 3 . After three months of heat-ageing at 60ºC no change in the mechanical properties was recorded for either the plain polyester fabric or 'spattering' and it was decided to increase the temperature to 80ºC. However, after two months, the tensile strength for both fabrics was unchanged. It was concluded that the polyester fabrics under investigation were very stable.

Preliminary tests have shown that putting permanent heat-set pleats in polyester fabrics does not introduce a weakness zone in the fabric. Also, the strength of polyester fabrics that had been soaked in deionised water was unaffected.

Samples of plain polyester and 'spattering' received a light exposure equivalent to approximately 80 years in the museum environment. Samples were also heat-aged in an oven at 60ºC and then at 80ºC. Following these ageing tests, the strength of both fabrics was found to be the same as for the unaged fabrics, which shows that polyester fabrics should be very stable in the museum environment. Finally, this study shows that the techno pre-treatment employed for the 'spattering' fabric has no detrimental effect on the durability of the fabric.

The financial support of the Art and Humanities Research Board for the 'Smart and Techno Fabrics Project' (project code AR13715) is gratefully acknowledged.

Thanks are also due to Nuno Corporation for providing samples of 'spattering', the Courtauld Institute, the National Gallery and to Imperial College for the use of their Instron machine.

Finally, I wish to thank Brenda Keneghan and Graham Martin from the Science Section and Paul Wyeth from the Textile Conservation Centre for their help and support.