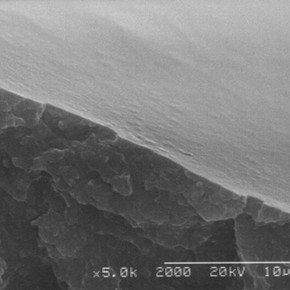 Artists in the 20th century have chosen to use gloss house-hold paints in the place of artists’ quality paints for a number of reasons: perhaps for the unique handling properties and surface characteristics they offer, for the social and cultural associations they evoke in the viewer, or simply because they are less expensive than traditional artists’ oils.

Although artists have made intermittent use of commercial house-paints since the 1920s, their use became widespread in the 1940s and 1950s. Partly responding to a desire to create textures and effects that simply cannot be achieved using traditional artists’ oils, and partly due to a fascination with drawing everyday materials into the realm of fine art, artists began increasingly to incorporate non-traditional paints into their artworks. But the presence of gloss paints on works of art can cause problems for the object’s care and longevity, not least because their glossy surface appearance is easily disrupted by many of the solvents and cleaning agents routinely used in conservation (figures 1 and 2).1 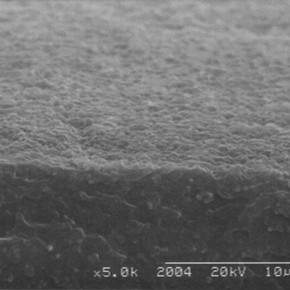 In the field of painting conservation, little was known about the types of resin that have been used in gloss paint manufacture, when each was introduced or discontinued, or the extent of their use by artists – all of which is essential if one is to ensure that artworks are cared for appropriately and interpreted accurately. It was this gap in knowledge that the research sought to address.

Key developments in gloss paint industry history: the 1920s to the 1960s

The period of study begins in the 1920s, when artists first began to experiment with commercial paints, and ends in the early 1960s, when all the major changes in formulation had been completed. The earliest decorative gloss paints were typically based on an oleo-resinous system such as linseed oil and copal and remained so until the introduction of the first synthetic resins for these purposes in the 1930s. It is apparent that these traditionally bound paints continued to be manufactured alongside their synthetic counterparts for a number of years, and they have been detected on works of art up until the 1960s. R. H. Kienle of America’s General Electric Company was the first to patent a process for making oil-modified alkyd resins in 1927, which were introduced as binding media for American decorative paints shortly afterwards.

The first decorative paint to be made on an alkyd system in Britain was ICI’s ‘Dulux’, introduced in 1932. It comprised phthalic anhydride, glycerol and linseed oil, and was formulated entirely from technology provided by the American company Du Pont. 2 It is evident that this first paint was of questionable quality, and problems associated with poor application properties were reported. 3 Production of this alkyd ceased during the Second World War, and it was not re-introduced until the late 1940s when improvements to its formulation were made. It was found that the substitution of glycerol for pentaerythritol enabled a resin with a greater oil length to be formulated, which improved its rheological properties significantly. A coincident development of the solvent method of manufacture meant that better quality, paler resins could be produced, and by the early 1950s many British companies were manufacturing oil-modified alkyds based on phthalic anhydride, pentaerythritol and linseed oil. Despite its excellent drying properties, linseed oil’s tendency to yellow rendered it unsuitable for pale coloured paints, prompting companies to experiment with the paler semi-drying oils such as safflower, tobacco seed and soya bean. By the early 1960s,most British pale coloured decorative topcoats were based on phthalic anhydride, pentaerythritol and a semi-drying oil.

It is evident that materials such as dehydrated castor oil, maleic anhydride and rosin esters have also been used for gloss paint manufacture, especially during the War years when raw materials were in short supply. Although popular for applications such as ship’s paint, there are conflicting accounts as to whether phenol-formaldehyde resins have ever been used as the binding media in decorative paints: some state categorically that they would never have been used due to their marked tendency to discolour,4 whilst others assert that they have; to date, they have not been detected on works of art.

It is therefore apparent that there were a variety of household paints available in the mid-20th century, any of which could have been used by artists. But why should the presence of such paints cause problems on works of art, how do they differ from traditional artists’ oils, and why does extra care need to be taken when treating them?

Firstly, gloss paints, and particularly oil-modified alkyd paints, differ substantially in terms of both appearance and chemical structure to artists’ oils and are easily disrupted by the polar solvents and alkaline cleaning reagents that form part of many conservation treatments. The highest quality artists’ oils are produced from cold pressed linseed oil, a manufacturing method that produces pale oils which are relatively stable in colour. Commercial paints however, often include lower grade oils, which may have undergone a refining procedure that will ultimately affect their colour stability. The resinous component of traditionally bound house-paints can also contribute to its discolouration on ageing. A desirable property of household paint is the speed at which it dries, achieved by the addition of metal soaps. But driers not only continue to have a siccative effect long after the film has thoroughly dried – ultimately contributing to its embrittlement and eventual breakdown – their solubility makes them susceptible to attack from solvents and cleaning agents.

Whilst artists’ oils will tolerate the addition of mediums to alter the gloss and consistency with little ill-effect, gloss paints have been formulated for a particular application technique and use, and defects quickly become apparent if they have not been applied as the manufacturer intended. Adulteration with thinners or solvents, or even mixing with other paints can seriously compromise the properties of the binder, and unorthodox application techniques such as dripping and pouring frequently results in defects such as wrinkling.

Although the paint industry considers the durability of oil-modified alkyds to be far superior to that of traditional oleo-resinous binders,5 in a conservation context, alkyds are far more susceptible to damage. When a paint formulator considers the durability of a coating, he or she is considering its resistance to UV light, its behaviour when exposed to extreme cycling of temperature and humidity, and the length of time for which it offers a coherent, protective coating. But (one hopes) these are amongst the last conditions to befall a work of art in a climatically controlled museum or gallery, and when conservators approach the concept of durability, they do so using a very different set of criteria. Durability of paint on a work of art relates more to resistance to the heat, moisture and solvents that form part of many conservation treatments, to factors such as physical damage caused by museum visitors – ranging from sticky fingerprints to cuts or blows to the surface – and perhaps most importantly for a painting that may be travelling to several overseas exhibitions each year, its reaction to the vibrations and knocks caused by travelling and handling.

When one considers alkyd gloss paints in these terms, their fragility quickly becomes apparent. Their susceptibility to basic attack makes the commonly used reagent ammonium hydroxide unsuitable for cleaning; their inferior water resistance means that care has to be taken if one is introducing consolidants or cleaning agents via an aqueous system, whilst their brittle nature means that they are more likely to crack and flake if applied to an inappropriately flexible support, or handled without due care.

The appeal of gloss paints

Despite their potential problems, gloss paints possess a number of desirable properties that have appealed to artists. They are quick drying – traditional artists’ oils take weeks to dry properly, whereas alkyds are touch dry in a matter of hours. Their fluidity allows unorthodox techniques such as dripping and pouring to be employed, enabling the creation of a range of unusual effects that simply cannot be achieved using traditional artists’ oils (figure 3). They are considerably cheaper than artists’ oils – an important factor to consider if artists are working on a large scale. Their glossy appearance appeals to artists wishing to exploit the effects of juxtaposed matt and glossy surfaces. Finally, the fact they are everyday, commercial materials has appealed to artists wishing to disassociate themselves from the traditions and techniques associated with ‘fine art’. 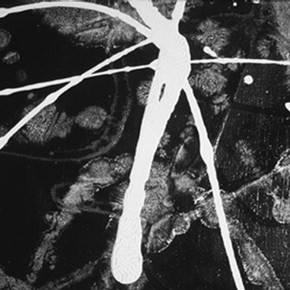 But the surface appearance of such paints is easily altered, most commonly manifested as loss of gloss. This may occur naturally as the paint ages, or may be a direct consequence of an inappropriate conservation treatment, but when one considers that artists have often chosen to use such paints precisely because of the glossy surface they offer, the implications of this become clear: if the appearance of the painting has altered, it is no longer conveying the message that the artist intended.

Knowledge about the precise nature of the materials present on a work of art therefore fulfils a number of important roles: it ensures that the artwork is cared for appropriately, it allows predictions to be made as to how it might age and deteriorate, and also offers valuable insights into artists’ working practices and intentions. A defining feature of 20th and 21st century art has been the emphasis on materials. For many artists, the non-traditional materials they choose are integral to the meaning of the piece, and our appreciation of the artwork as a social and cultural object is greatly enriched by an understanding of when and why artists have chosen to use them.

1 Harriet Standeven, ‘The conservation, scientific analysis & art historical research of ‘Streaker’, an abstract painting by Richard Kidd from 1974; with additional research into the effects of selected solvents & cleaning agents on alkyd based house paints,’ unpublished MA Dissertation (University of Northumbria, 2000).