Houghton Hall, Norfolk, was built and furnished in 1722-1735 for Sir Robert Walpole, the first British Prime Minister, by the innovative and leading designer William Kent. Many of the state rooms retain their original furnishings.

In 2002, under the Government Acceptance-in-Lieu (AIL) system, the V&A acquired two state beds, three sets of tapestries and two suites of gilded seat furniture, to be preserved 'in situ' at Houghton Hall for the nation. These items have fragile original hangings and upholstery and are in urgent need of conservation. A conservation survey, prior to acquisition, identified over a million pounds worth of conservation work. This extensive conservation project could not be undertaken by the V&A Conservation Department and external studios needed to be commissioned to undertake the work.

The DCMS provided £250,000 toward the costs of this project and in 2004 an application was made to the National Heritage Memorial Fund (NHMF) for further funding. Submission of the application involved the planning of conservation work, identification of appropriately skilled studios that could undertake the work within the five year timescale suggested by the NHMF and consideration of the impact of this work on the staff and visitors to Houghton Hall.

Two factors, fragility (conservation) and historical significance (curatorial) were  used to prioritise the collection. The Embroidered Bed (Figure 1) and the Kings and Queens tapestries (Figure 2) followed by the Venus and Adonis tapestries (Figure 3) were in most urgent need of conservation, followed by the Kent Bed counterpoint and the two suites of seat furniture. The Bacchus tapestries were sufficiently robust not to be included in the NHMF fund application. 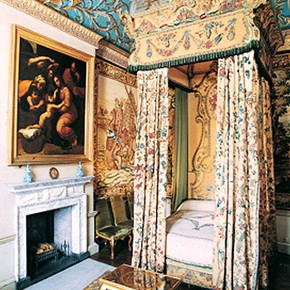 Conservation method statements were written for the tapestries by Lynda Hillyer, Head of the Textile Conservation Studio, and furniture by Christine Powell and Nigel Bamforth of the Furniture Conservation Studio. These specified for external tenders' standards of treatment, quality of work and documentation, and emphasised the need for the appearance of the conserved items to be appropriate to the ambience of the Hall.

Completing all conservation within a five year time scale was a challenge, particularly for complex and time consuming work involved in the treatment of the Embroidered Bed and tapestries. Treatments were broken down into smaller packages to enable two or more studios to work on items simultaneously. The 'lead studio' was responsible for ensuring quality and consistency of method and materials  for  all the studios conserving the the Kings and Queens tapestries and the curtains of the Embroidered Bed. In total for the five items/groups of furniture and textiles to be treated, 13 packages of work were defined (Table 1).

Studios with a proven track record of working on comparable collections (e.g. National Trust and English Heritage) were invited to tender for one or more individual packages/items. The studios were encouraged to apply their considerable experience and suggest materials and methods which would best fit the method statements.

A selection panel identified preferred studios for each of the packages; quality of work, consideration of risk and timetabling  were of  primary importance, and cost being a secondary conseideration.   Some studios successfully secured a number of packages. Further negotiation clarified costs and timetabling as well as the responsibilities of Houghton Hall, the V&A and the Studio in undertaking various aspects of work. Discussions between lead studios and their partners clarified roles and responsibilities which in turn led to further adjustments in costs and timetabling.

The V&A conservators made the final decision on proposed treatments, methods and materials. As a result, all studios working on the Embroidered Bed will use the same materials and techniques (where possible); one type of lining fabric and thread will be used throughout and the V&A will commission and purchase the replica braid to ensure historical accuracy.  Similar treatments will be used for both sets of tapestries; all will be wet cleaned in Belgium and re-hung in a manner that will ensure the ability to be rapidly removed in the event of a disaster.

As far as is reasonably possible the conservation work was programmed for October - March, when the house is closed to the public, particularly important when the work has to be undertaken 'in situ' at Houghton Hall. Disruption during the conservation of the Embroidered Bed and the tapestries is unavoidable.  Work by the different studios is being co-ordinated to minimise the effect on the House staff, and steps are being taken to minimise its impact on the visitor experience. 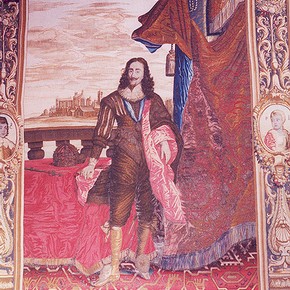 Figure 2. A panel from the Kings and Queens Tapestries (click image for larger version)

The curtains of the Embroidered Bed will be rotated to ensure that the base of the bed is always dressed, and a silk coverlet will be placed over the mattresses whilst the counterpoint is being conserved.  A tapestry from the V&A Collection will replace the Kings and Queens tapestries in the state room whilst it is out of the house being conserved.

Information panels will inform the public of the conservation project and progress reports on the V&A web site (linked to the Houghton Hall website) will help to forewarn visitors that those collections are not accessible.

In October 2004 a grant of £500,000 was secured from the NHMF.  This, together with the DCMS funding and support from the V&A (salary cost, insurance, materials and equipment) will secure the conservation of the Embroidered Bed, the King's and Queen's tapestries and three out of the four Venus and Adonis tapestries (funding for the remaining panel is currently being sought).

Work on this project began in October 2004 with the dismantling of the Embroidered Bed and the removal of the Venus and Adonis tapestries. The work will be undertaken by five different conservation studios, and will take five years to complete. 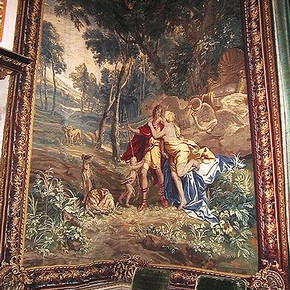 Figure 3. A panel from the Venus and Adonis Tapestry (click image for larger version)

My thanks go to the following people, without whom this project would not have got off the ground: DCMS and the NHMF for their generous support (in particular Ellen Dempster); the V&A 'Houghton Team', conservators, curators, Development, ISSD,  Learning and Interpretation, Contracts and Finance and in particular Michael Casartelli; to all the studios who tendered for the work and raised our standards even higher; Lord Cholmondeley and the Houghton Hall staff, for their help and (continued) patience as we invade their beautiful property and disrupt their lives.