Conservation of a tortoiseshell book cover

This 17th century tortoiseshell cover is part of a fascinating collection of bookbindings from the National Art Library, Victoria and Albert Museum. The detached cover is small in size measuring 14 x 9 x 1.5cm and encloses and protects a 1658 edition of 'Les Pseaumes de David' by Clement Marot (L.1149.1969), a small printed volume containing sacred songs and poems. It is a highly decorated, pocket sized book used for worship (Figure 1). 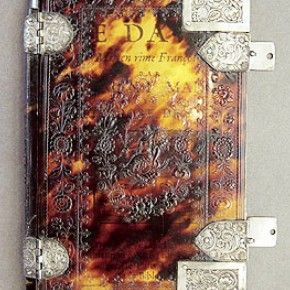 Tortoiseshell is a much admired decorative material derived from certain species of marine turtle, especially the Hawksbill. It is a thermoplastic material and withstands repeated softening by heating and will harden again when cooled. This made it suitable for decoration using heat embossed, block stamp designs such as the floral design on the cover of 'Les Pseaumes de David'.

Little is known about the use of tortoiseshell as a book binding material. Shenton's survey of approximately 20 such bindings held in English collections highlighted the only evidence for dating most of these bindings: the printed text block,1 which could have been inserted at a later date. The use of tortoiseshell as a book cover became popular in the 17th and 18th century for religious texts, small bibles, prayer books, and gift books.2 There was a brief renewed interest in tortoiseshell as novelty bindings for wealthy Victorian book buyers. 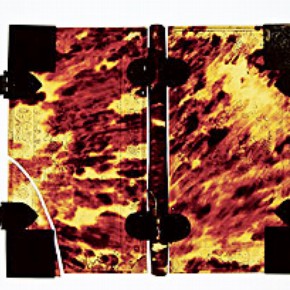 The cover has a well-documented history of previous repair.3 Examination of the cover using transmitted light revealed several excellent repairs to the spine. The detached lower corner had been previously reattached using gold beaters skin and a Poly(vinyl acetate) adhesive (Mowilith50® ). The two edges of the break no longer matched due to distortions of the cover and corner (Figure 2).

Before proceeding with conservation, the repair line between the cover and detached corner was cleaned with acetone to remove the previous repair of gold beaters skin and Mowilith adhesive (Figure 3). To degrease the area, acetone was selected, as it does not damage the tortoiseshell or silver decoration when used sparingly.

The current repair required the reattaching of the lower corner, which includes a silver clasp and silver corner piece. To leave the corner loose within the drop-back box housing would increase the chances of further damage, continued planar distortions and possible loss. An investigation of current methods for reversible repair and transparent in-filling of translucent materials was conducted with a view to reattaching the lower corner.4 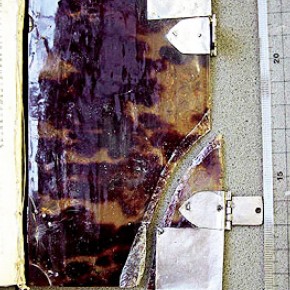 Ken Watt, Head of Ceramics Conservation and Restoration at West Dean College, and his students have performed successful repairs to tortoiseshell objects, using Fynebond epoxy resin developed by conservation scientist Norman Tennent. Fynebond has high bond strength, some flexibility which allows it to move with the material under fluctuating environmental and physical conditions and gap filling properties. Due to the planar distortion, good contact along the line of breakage was required. Roger Rose, Head of Early Stringed Musical Instruments at West Dean College, recommended a two-stage casting process that could be adapted to make a mould to exactly fit the contours of the cover and lower corner, ensuring accurate contact and bonding along the repair line.

A bespoke wooden jig was constructed to ensure the cover was fully supported during the moulding and repair procedures. A polyester film barrier (Melinex) was placed between the tortoiseshell cover and jig. A polyester repair paste (Isopon P38) was used to make the two-stage mould (Figure 4). Clamps with polyethylene foam padding (Plastazote) were used to ensure the object remained in position during this procedure, which resulted in a single mould. Care had to be taken when allowing for the polyester paste to set.

Due to the exothermic nature of the paste there was concern it might result in further distortions to the object. For this reason, it was only left in contact with the object for the recommended drying time of 3 minutes. The mould was then allowed to air dry for 7 days before proceeding to the next stage of the repair. 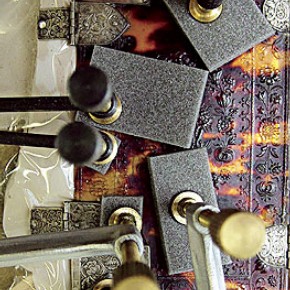 The Fynebond adhesive comprises a two-part resin - a crystalline epoxy group and liquid hardener. For this repair, 1g of crystals were dissolved in a double boiler before adding 0.32g of the hardener. The resulting adhesive had the viscosity of a commercial fast-bond adhesive. This allowed good flow over the repair surfaces while not oozing or flashing beyond the repair line. Meanwhile, a thinner polyethylene barrier (Cling film) was placed between the cover/corner piece and the polyester paste to release the object when the repair was completed. The cover and corner fitted snugly into the contours of the mould and good contact on the repair line was achieved. Using a sable 000 brush the Fynebond was painted along both break lines and slotted in place. The clamps and Plastazote padding were returned to the same position as before by referring to earlier digital photographic records taken during the mould making process. The repair was allowed to cure for 48 hours, as determined by the curing time of a spot test of the adhesive placed on a new piece of tortoiseshell at the same time as the repair. 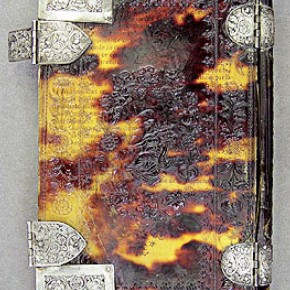 After 48 hours the in-filling was completed using a more viscous mixture of Fynebond - achieved by 12 hours refrigeration of the same mix used previously. The harder mixture allowed for accurate placement of the resin in the remaining open areas of the break-line without flashing beyond the repair. Flashing would be difficult to remove without damage to the fine embossed decoration on the surface surrounding the repair area. Four days later the repair area was given a final polish with a fine, 8000 grit polishing Micromesh cloth and abrasive polishing pastes (Tripoli and Rottenstone) in de-ionised water. This gave the repaired area a more sympathetic finish. An additional off-gassing time of 5 days was allowed before the text block could be returned to the cover to allow for off-gassing of volatile compounds.

Using the Fynebond epoxy resin to reattach the lower corner has proven successful (Figure 5). The flexible nature of the adhesive allows some movement of the tortoiseshell and the repair. The transparent repair does not detract from the attractive pattern for which tortoiseshell was so prized. This tortoiseshell cover offered a chance to repair one of the more unusual materials used for adorning a book. There are other interesting bindings in the National Art Library that incorporate the use of unusual covering materials.

1.  Shenton, H., The Use of Membranes in Conservation: the Case Histories of a Tortoiseshell Bookbinding and the Lady Clapham Doll's Mask, in 'Conservation today: papers presented at the UKIC 30th anniversary conference' (1998), pp.76-80
2.  Kuhn, H., Trone, A., Objects made from Tortoiseshell and Horn, in 'Conservation and restoration of works of art and antiquities', Oxford: Butterworth-Heinemann (1987), p.132
3. Shenton, p.78, ibid
4.  Davison, S., Reversible fills for transparent and translucent materials, 'Journal of American Institute for Conservation', volume 37, Number 1 (1998), pp.35-47