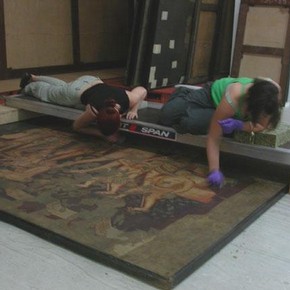 Figure 1. Students using a bridge to clean one of the larger paintings. Photography by Nicola Costaras (click image for larger version)

In June 2005, 81 oil on canvas copies of the Ajanta cave paintings, unseen by Museum staff for the past 13-25 years, became the focus of a major conservation and storage project which resulted in the 're-discovery' of some important paintings.

The 31 caves of Ajanta have inside them the earliest extant examples of mural painting in India. Dating from the 1st century BC to about AD480, these sophisticated, elegant, and detailed paintings depict Buddhist scenes and are considered of primary importance to the history of Indian art. Since the discovery of the abandoned caves in 1819 by a British army officer out on a hunting trip in the mountains of Maharashtra, scholars were quick to recognise the importance of the caves and were aware that the exposure of the paintings, after lying in secluded darkness for hundreds of years, was leading to their rapid deterioration. With a view to preserving these images several attempts were subsequently made to produce facsimile copies.

The copies in the V&A were produced between 1844 and 1885 under two separate initiatives. Major Robert Gill, commissioned by the Royal Asiatic Society, was stationed at this remote setting from 1844 to 1863 and painted about 30 large scale canvases. Displayed in the Indian Court of the Crystal Palace in Sydenham, most were destroyed in a fire there in 1866, leaving only four surviving examples. The importance of the project was such that in 1872 the Government of Bombay commissioned John Griffiths, the principle of the Bombay School of Art and his students to make a new set of copies. It took 13 years to complete the project at a cost of £30,000. Three hundred paintings were shipped to London, and many were put on display at the Imperial Institute (current site of Imperial College) alongside the vast collection of Indian objects now housed at the V&A. However, in June 1885 disaster struck once again and another fire in one of the stores in the institute destroyed well over a hundred canvases.

The V&A currently has 166 paintings varying in size from half a metre square to 3 x 6 metres. Some, because of their large size are rolled, but most are mounted on stretchers or strainers. Since 1955, when five of the paintings came off display, the whole set has been in storage in various locations in London. A combination of factors including their large size, has meant that they have been inaccessible and undocumented. The aim of this conservation and storage project was to move the 81 paintings on the V&A site to better storage.

With the help of six conservation students from the University of Northumbria at Newcastle and Lara Wilson, a paintings conservation intern in the Department, the paintings were assessed and surface cleaned. Minor treatments were undertaken to make the paintings stable enough to be moved. 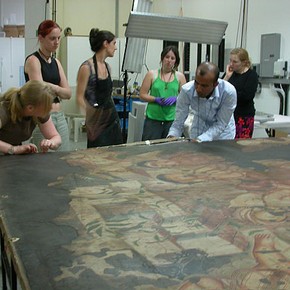 Several areas of flaking paint and torn canvas had been faced by V&A paintings conservators 25 years ago as a 'temporary' first aid measure. Due to similar time constraints on this occasion we had to concentrate on repairing tears that had occurred on ten paintings in the intervening period rather than providing a more permanent treatment of the earlier damage. Over a period of three weeks all the paintings were examined, documented and photographed. Each painting was checked to ensure that the stretcher was sound, missing wedges were replaced and all the wedges were secured.

In instances where any new flaking paint had occurred, this was consolidated and the tacking edges of three of the canvases were reinforced where they had split. In consultation with the curator, we carried out the facing removal and fixing of paint on selected areas of special interest because of the rarity of the depicted scenes in Buddhist iconography so that these could be photographed. Each painting was photographed by the V&A Photographic Studio before being wrapped and transported to their new off-site storage. We received invaluable help from Technical Services both with the handling of the larger works and with the completion of the project: the wrapping, transport and storage.

Through the process of assessment and surface cleaning some previously undocumented discoveries were made on both sets of paintings. One of the most interesting discoveries was on the painting procedure of Griffiths and his students. On several of the paintings excess canvas extending around the reverse of the stretcher revealed writing in red paint all along the upper and lower edges of the paintings. The writing turned out to be start and finish dates and indicated that large scale paintings were completed in narrow vertical strips. One example being IS.89-1887, measuring 1.98 x 4.3 metres. On the upper edge of a 93 cm wide strip is inscribed 'begun on 30th Jan 1882' and on the lower edge 'finished 13 Feb 1883', the adjoining 83 cm wide strip was begun the day after on 14th Feb 1883 and finished on 6th March 1883, this continues until the final finish date which is 11th June 1883.

Thus revealing that the time taken on a painting of this scale was approximately five months. It is also likely that only one student worked on each painting rather than a group of students working as a team. This theory was supported by finding a signature in a corner of one of the paintings (IS.92a-1887): written in pencil was the name 'Pestonji Bomanjie'. In his annual reports to government Griffiths praised Pestonji Bomabji as being his most valued student. Until this discovery it had not been possible to attribute any particular painting to an individual artist. 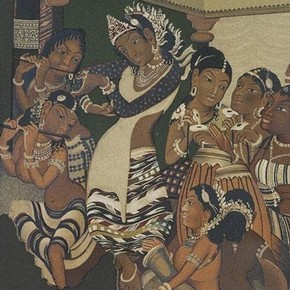 As the project progressed and more of the surface dirt was removed from the canvases, the beauty of the paintings and the sheer amount of detail within them began to be revealed. When compared to recent photographs, many of the paintings show the extent of deterioration of the actual cave paintings. See for example, Gill's painting IS.53-1885 (Figure 3). Today, a large patch is missing from the patterned skirt-cloth of the dancing lady. We know from written accounts of the time that even in the gap between Gill finishing his painting in 1863 and Griffiths and his students starting their painting in 1872, that the caves were under constant threat from people as well as swarms of bees and bats.

However, as Griffiths appears not to have re-painted any of the four scenes that remained of Gill's work we have no overlapping examples to indicate if the damage occurred during this ten-year period or much later. This highlights the importance of the V&A copies as accurate documents. With the continued deterioration of the caves, these paintings will prove invaluable to scholars of the future, thereby fulfilling their intended purpose as envisioned over 160 years ago when the commission was first given to Robert Gill.

Although this three week project did not allow time for an in-depth investigation of the paintings, or for the complete conservation of any of them, it highlighted the potential for the use of these paintings in future V&A projects. In 2007 selected paintings will be part of a major sculpture touring exhibition entitled Indian Art and Devotion. This will provide the opportunity for more extensive conservation and study of a few of these works and thereby contribute to this new and growing body of knowledge about the Ajanta cave paintings.