In preparation for the V&A's autumn 2007 exhibition, The Golden Age of Couture , an extremely rare costume by Christian Dior was brought into the Textile Conservation Studio for treatment (Figure 1). It was amongst over one hundred costumes, underwear, hats, shoes and other items requiring conservation and mounting before display.

The greatest challenge this costume presented was its appearance; it was heavily soiled, distorted and visually unappealing. The question was - could it be cleaned and reshaped? 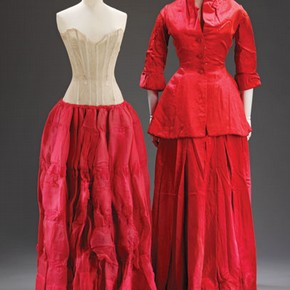 The costume, entitled Zemire by Dior (T.24-2007), consists of a bodice, skirt and jacket made from a vibrant fuchsia pink fabric with a full-length petticoat of stiff net and crin (a stiffening fabric) with a boned bodice. This ensemble was the star piece of Dior's autumn/winter collection of 1954. In spite of its fame it was believed no version of this outfit had survived - that is until Claire Wilcox, the curator of the exhibition, spotted it anonymously listed in a Paris auction. Permission was granted to acquire the piece specifically with the exhibition in mind. Investigations have since proved that it was commissioned by Agota Sekers, the wife of Miki Sekers the textile manufacturer.

In Dior's original collection the Zemire design appeared in a subtle grey silk satin with mink trim. This bold, fuchsia pink version had been created using a Sekers manufactured satin weave fabric of the early synthetic cellulose acetate. The obvious intention was to showcase the fabric using Dior's design, which was perfectly suited because of the quantity of fabric required; the waist of the very full skirt measures over five meters when un-pleated. This joint creation is a neat illustration of Christian Dior's commercial acumen.

The condition of the costume at the time of purchase was startling. The hem of the skirt was black inside and out. All parts were soiled. There was extensive water-borne staining throughout; the proper left sleeve of the jacket and front of the skirt both had large stains down their entire length that had hardened to the consistency of cardboard. The whole ensemble was very heavily creased and misshapen. The waist of the skirt had been taken apart and cobbled together again in haphazard gathers. As one of my colleagues succinctly put it - it was a mess!

It was apparent the costume could not be displayed in its present bedraggled state and any treatment undertaken would need to focus on cleaning. The fabric was analysed and identified as cellulose acetate by the Science Section (this was before the connection with Sekers had been made). Information found on cleaning methods for cellulose acetate tended to be for contemporary examples; nothing was found for fabric of this age.

Cleaning tests followed. Surface cleaning using vacuum suction was ineffective. Chemical sponges had limited success on the black hem of the skirt; the sponges came away black but there was no visual improvement. Stoddard solvent was tested and was reasonably effective, it reduced the black soiling around the hem by approximately 20%. Wash tests were also carried out. The results showed that the cellulose acetate released dye in a non-ionic wash solution with a pH of 5.6. It also released colour - but to a lesser degree - at a higher pH of 8, in a wash solution containing the chelating agent tri-sodium citrate. Though there was dye loss, there was no discernable colour change. The fine silk used as the primary lining in all the pieces released dye more readily; the amount of loss increasing as the pH rose, exactly opposing behaviour to that of the cellulose acetate. The secondary heavier silk lining in the jacket lost colour in a pH as low as 4.5 and above this, in a wash solution with a pH of 5.6, the loss was so great that the colour changed from deep pink to pale pink.

From the evidence it was felt that solvent cleaning would offer the least detrimental solution. Because maximum efficiency was required, a commercial dry cleaner of considerable experience was invited to the V&A to examine the costume. After discussions it was decided that the jacket, bodice and skirt would all undergo commercial solvent cleaning using perchloroethylene (PERC). It was thought PERC would be more effective on the black soiling than a white spirit-based solvent. It was accepted that the creasing would remain and that it was unlikely any of the water staining would be removed. The results were very much as expected; the black soiling around the skirt's hem was reduced by as much as 50% but was still evident, the creasing and water staining were unchanged. Whilst carrying out further tests on the hem using a dilute detergent solution in an attempt to reduce the black soiling further, it was noticed large amounts of brown soiling were being released, presumably originally water-borne. To remove the creasing, hot steam would have to be employed and this sat uncomfortably with the amount of soiling still retained in the fabric. The introduction of steam could cause hydrolysis of the fibres and fix the soiling. 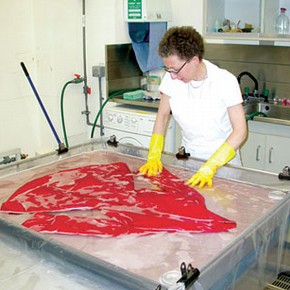 After consultation with Claire Wilcox, the decision was made to wash the jacket, bodice and skirt, in the knowledge there could be colour loss and not knowing what level of soil release would be achieved. This necessitated the removal of the secondary lining in the jacket and the removal of the skirt from its yoke to release the uneven gathers. The primary lining of fine silk found in all parts of the costume was structurally integral and could not be removed; it was accepted there would be probable colour change.

To maximise cleaning efficiency, the chelating agent tri-ammonium citrate was added to all wash baths, raising the pH from 5.6 to between 6.3-6.6. Due to the complexity of the jacket's structure and scale of the skirt, logistics dictated that all parts be washed separately, introducing the further risk of inconsistent results. The bodice was washed first; being the smallest item it was felt to be the most controllable. The results were pleasing, a noticeable reduction in soiling but the creasing remained. The jacket (the skirt of which was lined with three different fabrics) was then washed with enhanced results (Figure 2); all the water staining was removed and the appearance was much improved. Finally, the skirt was washed, again with impressive results. Though some of the water staining remains, the fabric became soft and malleable, and the lustre of the satin was greatly enhanced. 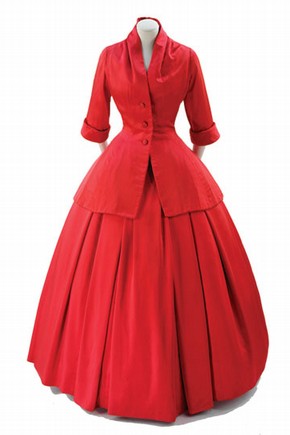 There was, indeed, dye loss in all the baths and it is probable that this was from both the cellulose acetate and the primary silk lining. Dye loss does not always equate to colour change. The visual intensity of the cellulose acetate appears unaltered and importantly, in all three parts - bodice, jacket and skirt - it remained colour-matched. However, the primary silk lining did lose colour and is paler after washing.

The level of cleaning allowed the use of hot steam to remove the creasing which had been so extreme it had masked the true shape of the ensemble. In turn, the steaming facilitated the reinstatement of Dior's original, complex, soft box pleating around the skirt. The soiling down the left sleeve of the jacket and centre of the skirt -  which had been so hard there was a danger the fabric could crack with handling - was gone. And the final result? The costume on display is now recognisable as an original Dior creation (Figure 3).