Observations on the causes of flaking in East Asian lacquer structures

The Victoria and Albert Museum houses a large collection of East Asian lacquer art. The main coating constituent of these objects is the sap of certain trees, which polymerises through an enzyme-catalysed reaction in the presence of oxygen and high relative humidity. Like many other museums in the West that collect objects of similar nature, the V&A has a small but significant number of artefacts that have suffered severe damage to their lacquer coatings over the course of time. The lacquer coatings show dramatic signs of degradation, with cracks covering large areas of the surface, cupping and tenting of layers, and, in the worst case, considerable losses caused by the complete adhesion or cohesion failure of the layered coating structures (Figure 1). 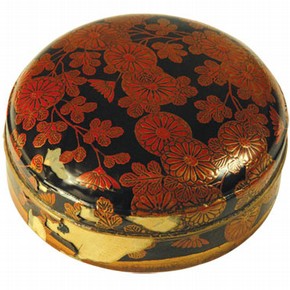 It is generally understood that damage to lacquer coating structures is caused by unfavourable environmental conditions during storage and display such as exposure to ultra violet (UV) and visible light radiation (VIS), and frequent or extreme fluctuations of ambient relative humidity and temperature. However, it is unclear why some objects are more badly affected than others when exposed to similar environmental influences.

A small survey of the Museum's Japanese and Chinese lacquer collections was undertaken in order to understand the failure mechanisms responsible for the flaking of East Asian lacquer coatings and to find out whether it was possible to discern any structural or compositional similarities between the objects. Objects displaying the most severe cracking and flaking were targeted for the survey. Examination with the naked eye and a stereo microscope was undertaken to identify objects where the damage had been caused by inherent structural weakness rather than accidental impact. These were studied in more detail and sampled for cross-sectional analysis. 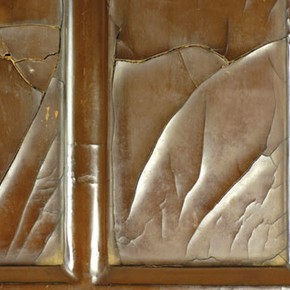 Figure 2. FE.7-1973 Detail of a Chinese lacquer cabinet showing extensive cracking of the lacquer coating on the inside of the drop-front (Photography by Nanke Schellmann) (click image for larger version)

The survey confirmed an earlier assumption that Japanese objects which had been originally produced for the western market (frequently referred to as 'export-ware') and Chinese lacquer screens were particularly affected by cracks and progressive flaking of the lacquer coating. However, an early fifteenth-century Chinese cabinet (FE.7-1973) had only suffered minor losses to its lacquer coating, despite displaying pronounced lacquer cracking and cupping (Figure 2). A comparison of this object with the group of Japanese export lacquerware and the Chinese screens seemed a promising approach to resolve the question of why lacquer coatings behaved so differently.

East Asian lacquer coatings are complex multilayered structures, usually consisting of several foundation layers, sometimes incorporating sheets of textile or paper, followed by a number of lacquer top coats to produce a highly polished surface. The main rationale behind this complex layer structure is to achieve a perfectly smooth surface that can be polished to a mirror-like appearance, and to balance stresses within the coating structure, which is a prerequisite for achieving long-lasting lacquer finishes.

Stresses are best distributed and compensated within a multilayered structure if all layers show a similar elastic behaviour and adhere strongly to one another. Usually, the individual layers differ in their mechanical characteristics, owing to the varied natures of their components. Even if the lacquer layers show a great compositional similarity, the coating will exhibit a different mechanical behaviour to the substrate it is applied to. Strong cohesion within the layers and a firm attachment to the substrate and adjacent layers is required to inhibit or restrain the expansion and contraction of the composite layer in the in-plane directions (horizontal to the layers) and helps reduce the risk of delamination.

East Asian lacquer is known to be a strong (flexible though rigid) material featuring firm cohesion and good adhesion between individually applied layers.1 The surveyed objects reflect this in that none of them showed any delamination within the pure lacquer layers. The cohesion and adhesion of composite foundation layers, on the other hand, depends on the amount and nature of binder enclosing the pigment particles. As lacquer has always been a very expensive material, it was frequently replaced by cheaper binding media (e.g. animal glue or persimmon juice) or adulterated with additives (such as funori (sea-weed) or oils) in Japanese export-ware and Chinese coatings.2  Foundations that do not contain a high amount of oriental lacquer, or introduce weaker binding substances to the multilayered coating, will weaken the structure. It was therefore expected that the lower quality of their foundation layers would be found to be responsible when lacquer artefacts exhibited extensive flaking. 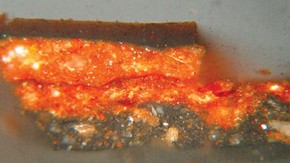 Cross-sectional analysis of a number of samples taken from the group of objects showing severe flaking damage gave useful insights into the structural and compositional weaknesses of the lacquer coatings. The cross-sections were microscopically analysed under VIS and UV light, and some chemical staining for the identification and distribution of binding media groups was undertaken. Ponceau S and Amidoblack 10B stain were used to identify proteinaceous media.

Starch was detected with iodine potassium-iodide (Lugol's solution), and oil with Sudan Black B (Figures 3a-c). The binding media of the foundation layers were analysed with Fourier Transform Infrared Spectroscopy (FTIR) to verify the staining results. This research is still underway. 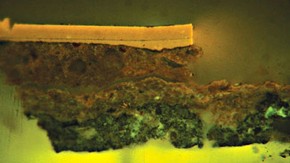 Figure 3b. Cross-section (as in figure 3a) seen under UV light showing 3 foundation layers and 2 lacquer layers (Photography by Nanke Schellmann) (click image for larger version)

The analysis of the coating samples showed some interesting preliminary results.  The samples taken from the Chinese cabinet differed profoundly from those of the Japanese export-ware and the Chinese screens. Its foundation layers were densely bound with a high concentration of oriental lacquer (low pigment to binder ratio), thoroughly coating even the fibres of the incorporated textile layer. Thus, the structure possessed hardly any pores, which was also confirmed with scanning electron microscopy. This suggests that a dense lacquer structure throughout the entire thickness of the coating may not necessarily inhibit cracking, but is effective in preventing flaking. Adhesion between the wood substrate and a composite foundation seemed to be significantly improved if the wood was primed with lacquer before the application of the foundation and/or the foundation was bound with a high content of lacquer. 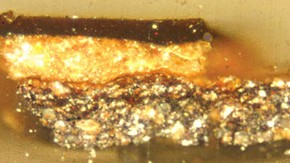 Figure 3c. Cross-section (as in figure 3a) after staining with Lugol’s solution, VIS light. Adhesion failure at the interface between the top foundation and the starch-containing layer (Photography by Nanke Schellmann) (click image for larger version)

Where paper was used, it tended to be the weakest layer where delamination was likely to occur. It either fully detached from the adjacent foundation layers or wood substrate, if poorly adhered (usually with starch), or split lengthwise within the layer, particularly when adhered with lacquer. Furthermore, protein-bound foundation layers generally appeared not to adhere well to starch layers and failure was likely to occur at their interface. Starch-containing foundations also appeared to cause problems, particularly when artefacts had been exposed to high levels of humidity. Such layers tended to exhibit adhesion failure from their adjacent foundations and promote delamination. Failure within protein-containing matrices (cohesion failure) and at their interface with adjacent textile layers was observed in several instances.

Preliminary results gained from microscopic, cross-sectional and FTIR analysis gave some indication of the different failure types that may occur in East Asian lacquer structures. Delamination appears to take place predominantly at, or near, the interface of layers that are bound with different media. Layers with a high lacquer concentration show good cohesion and adhesion to adjacent foundation layers and lacquer films. Cohesion failure of foundations that contain protein or starch was found to be a common cause for the flaking of East Asian lacquer coatings. Ongoing research aims to build on these results to provide conservators with a clearer picture of failure mechanisms in multilayered lacquer structures. This is essential for finding appropriate consolidation treatments for flaking lacquer coatings.

With many thanks to Heinrich Piening and Bernhard Mintrop, Restoration Centre of the Bavarian Administration of State-owned Palaces, Gardens and Lakes, Munich, for their valuable support and provision of analytical equipment and materials, as well as Shayne Rivers, V&A Furniture Conservation, and Dr Ambrose Taylor, Imperial College, London for their supervision, discussions and advice.

*Supported by the Toshiba International Foundation