The last decade or so has seen the transformation of knowledge-behaviours by the World Wide Web. The key to this rapid shift has been both the advent of the free software (or 'open source') movement and Web 2.0, whereby knowledge content has moved away from being a flat one-to-many model to a model of many-to-many content generation. The latter offers vast possibilities in the circulation of knowledge and of unlimited exchange in cultural content. As the Museum pushes itself into the digital domain, there entails a raft of demands and consequences about the knowledge economy in which it currently sees itself operating. It is against this background that this short paper will address a notion of practical ethics.

Codes of ethics are intended to produce real-world behaviours but without necessarily invoking clearly defined goals. The end cannot always justify the means, be it the greater good, the end to poverty, or just keeping things together. The V&A Conservation Department's Ethics Checklist1 is described both as a tool for conservators in treatment decision-making, and a filter reflecting the guiding philosophy of the Department. This document is not meant as a temporary nor as a contingent scaffolding, rather as the standard for object care in the Museum. Along with other codes, what it reinforces is the assimilation into conservation of scientific methodologies alongside particular versions of full disclosure - where facts relevant to the object's care are recorded - with both being centred around clear documentation. Such features are designed to pin down decision-making by conservators onto a bedrock of empirical evidence, so that, for example, the future can reverse-engineer our present.2 What is strikingly important in all this is that conservation's commitment to disclosure mandates a positive entry into the changing knowledge economy.

However, a difficulty arises when conservation understands itself as being concerned with the preservation of both the material and the cultural value of a thing, especially as the latter shifts with the changing role of the host institution. The V&A's current focus is to share its collections 'and explore the cultures that created them, … as resources for learning, creativity and enjoyment by audiences within and beyond the United Kingdom', moving the Museum from earlier descriptive inceptions as a pedagogical institution, museum-as-machine-for-learning, or the museum-as-metaphor of popular modernity, and into the current museum-as-global-agora. This difficulty is summed up in Article 3 of The Venice Charter 1964 , The International Charter for the Conservation and Restoration of Monuments and Sites3  (where "monument" might be substituted by 'object'):

Treating an object as an artwork and as an object of historical process presents some often irreconcilable demands. Commensurability is never guaranteed between the supportive narratives used in decision-making (by, for example, curators and conservators) since differing ideologies and discourses construct the detail of an object differently. At its most significant an ideology cements itself as a lived belief at the level of practical execution, but this is also the grounds for its failure, when the material fails to line up to affirm its methodologies, and reveals the present as somewhat more contingent. 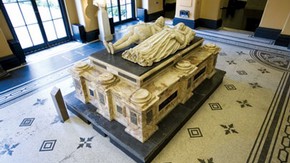 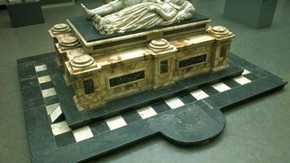 Figure 1. A.186-1969 Moyle Finch Monument as installed in Gallery 50 in 2006 (Photography by Sculpture Conservation) (click image for larger version)

Within the V&A the emphasis is on optimising an object's aesthetic and decorative importance from a particular time and place in (its) history. This reflects an ideology produced through the mobilisation of groups of relations forged in the Museum's past. With a contemporary eye on the authenticity of the viewer's experience, this crueller legacy of the Enlightenment is further compounded by the expectation for the object to perform in new ritual and social networks. Whilst a richly worked memorial tomb chest taken from its church setting displaces certain historical truths about the piece, it now also has to allow for the continuing creation of aesthetic as well as wider social functions within the Museum (Figures 1 and 2).

Against these shifting relationships conservators often feel the need for some sort of ethical consequentialism, invoking the utilitarian view that an action's ethical right or wrong is based on the balance of its good or bad consequences for the object and its interpretation. The Museum's commitment to the democratisation of knowledge through the portal of full disclosure would be a measure of those consequences.

The analysis and identification of an object's components, each of which correspond to some point in its history, and the disclosure of the context and evolution of decision-making (including an object's current production status) provide a rich mapping for a practical ethics that recognises the object as a knowledge asset.

Such an ethical approach is thus descriptive: the decision mechanisms through which the current Museum is now produced are placed on record; and the degree of deviation from the normative (qua scientific) methodologies subscribed to in an object's care is indicated as part of the process of this disclosure. This ethic is also moderately prescriptive because its methodologies are applied as the prevailing ethos for object care across the Museum. This means that the Museum rigorously adopts methodologies that govern its technical operations. The Ethics Checklist, along with its raft of supporting documents, is a good place from which to begin this consultation.

This also entails that the current version of an object (or asset) is more fully understood as part of its continuing history, and that contexts of decision-making are themselves available as part of this history. An understanding of the chain of processes and any conflicts encountered are a part of that disclosure, with any fault-lines between the authenticity of object and authenticity of the viewer's experience neatly rounded out in the object record which should itself become a major part in the Museum's knowledge economy.

This is a practical way forward for addressing the conflict and contradiction that any social order, like a museum, inevitably produces in itself.

I am grateful to Alison Richmond, RCA/V&A Conservation, for invaluable discussions, and to Peter Kelleher, V&A Photographic Studio, for image advice.

1. https://www.vam.ac.uk/res_cons/conservation/advice/policies/index.html
(Ethics Checklist 1994, revised 2004) (link accessed 26 August 2007)
2. For this assimilation codified as a general museum ethic see e.g. Article 9.2 of the Museum Association code of Ethics for Museums.
http://www.museumsassociation.org/asset_arena/text/cs/code_of_ethics.pdf (link accessed 26 August 2007)
'Apply the highest possible standards of objectivity to the research undertaken by the museum, and distinguish clearly between evidence and deduction. Maintain, as far as possible, records and material so that the evidence on which research is based can be re-examined and verified independently'.
3. The Vencie Charter (link accessed 26 August 2007) http://www.icomos.org/venice_charter.html