In 2006-7 the V&A obtained funding for a Conservation Fellowship through the Samuel H. Kress Foundation. The goal of the fellowship was to provide a dedicated paintings conservator for the collection of Renaissance objects, particularly painted cassoni. Practical conservation treatment and research was carried out in the Paintings Conservation Studio. The project developed out of the larger scheme of the re-display of the medieval and Renaissance collections under V&A FuturePlan. This larger endeavour includes the conservation and study of over 1,800 objects, in multiple disciplines, in preparation for the opening of the new galleries in 2009. The display design for the new Medieval and Renaissance galleries includes six painted cassoni as well as other related fifteenth-century paintings and painted objects on wood. Because of the nature of many of the objects an interdisciplinary approach was essential. This included collaboration with conservators from Furniture, Gilded Furniture and Frames, Textiles, Books, the Science Section, Photographic Studio, and MA students on the V&A/RCA course, as well as continuous ongoing support from several sections of the V&A curatorial departments.

The term cassoni refers to a type of decorated wooden dowry chest from central Italy, used extensively from the end of the fourteenth, through the fifteenth and sixteenth centuries. The V&A holds a large collection of Italian Renaissance cassoni of varying types and periods, including a number of cassone panels. These panels are the decorative fronts of cassoni that have been disassembled in response to changing tastes, or modified specifically for sale during the nineteenth and early twentieth centuries. Because of the dates of acquisition and state of preservation of several of the panels, both technical examination and documentary research was considered necessary prior to exhibition. This research aimed to provide information about the methods of construction, materials and artistic techniques used, and to give evidence of authenticity, or when possible, confirm the attribution. A variety of analytical methods were used for the investigation of the materials and techniques. 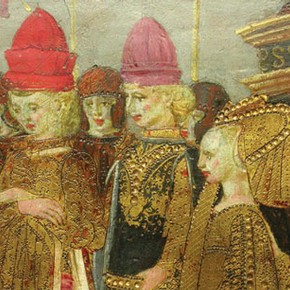 The construction and decoration of cassoni closely parallel methods used for contemporary altarpieces, and a number of fifteenth-century panel paintings with similar techniques were also treated in the conservation studio. These included a small Siennese panel from an altarpiece depicting Saint Stephen (371-1876) and a Siennese accounts book cover, Tavoletta di Biccherna, dating from January to June of 1402 (414-1892). Important archival research was conducted at the State Archive and Museum of the Biccherne of Siena relating to the history and treatment of the accounts book. The fellowship work focused most heavily on a detached cassone panel attributed to Apollonio di Giovanni (5804-1859), from the 1460s, depicting The Continence of Scipio (Figure 1). The panel is painted in tempera and has extensive gold leaf and tooled decoration. The cassone was detached before purchase and no original framework or joinery remains. Thinning of the panel, to give the appearance of a panel painting, eliminated the original finish on the back and possibly contributed to the convex warp and splitting along the grain.

Further examination and comparison with other Apollonio panels indicated that the upper paint layers were damaged as a result of a systematic cleaning across the entire surface. These missing elements affect the overall reading of the composition, and include near-complete loss of glazes in the coloured brocades applied over the gold leaf. The conservation treatment (Figure 2) was sympathetic to the history and use of the panel as a cassone but the overall appearance and legibility, and the damage to the glazes, was considered to be too great for an ethical reconstruction. This led to the proposal of a virtual restoration, where the panel will be exhibited in a more authentic state allowing viewers to see the original intention of the artist through digital reconstruction. 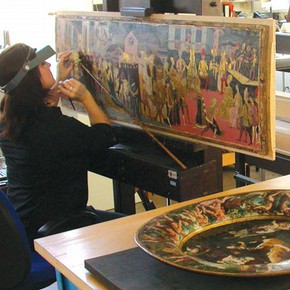 Figure 2. Treatment of the panels in the Paintings Conservation Studio (Photography by Rachel Turnbull) (click image for larger version)

Direct stylistic comparison was made with other V&A objects attributed to the workshop of Apollonio di Giovanni, such as a birth tray depicting The Triumph of Love (144-1869). The birth tray provided insight into the techniques and hands involved in the production of domestic artwork. The investigation into studio practises and styles lead to further discussion and to a more comprehensive examination of cassone. Visits were made to the National Gallery, the British Museum, the Courtauld Institute of Art, the Fitzwilliam Museum, and the collections in Florence at the Palazzo Davanzati, Museo Horne, as well as the Museo Bardini. Findings of the V&A Apollonio research were presented at the conference Art, Conservation, and Authenticities: Material, Concept, Context, at University of Glasgow, 12-14 September 2007. The fellowship period also overlapped that of the successful exhibition At Home in Renaissance Italy (V&A October 2006 to January 2007) which focused on the study of urban domestic spaces. Through the exhibition curators, Marta Ajmar and Flora Dennis, an arrangement was made to join the MA study trip to Florence with the V&A/RCA History of Design students of the Renaissance Decorative Arts and Culture course. The trip centred around the study of the Renaissance interior through looking at Florentine houses and decorative arts collections. Included in the trip was a visit to the conservation studio of Simone Chiarugi, a third generation restorer of cassoni .

Of particular importance to the fellowship was the examination of a pair of gilt cassoni with high-relief decoration dated to the 1430s. One (8974-1863) being a full cassone, the other (21-1869) is a detached cassone panel, with some modification of the support. They were acquired by the Museum in the 1860s at different dates from two different sources, but were purchased because of their stylistic similarities. They have always been considered as originating from the same Florentine or Tuscan workshop. The objects are an excellent example of development of the decorative style in cassoni , showing the transition from floral motif patterns and symbols of worldly love, to depictions of the rituals of the marriage agreement itself. Both show variations on the theme of the wedding processional. They are executed in a high-relief pastiglia, with tooling and coloured glazes creating the figures. The paint layers have been applied directly over the gold leaf in large areas of the composition. This unusual technique has led to flaking of the paint layers between the gold and bole layers in a similar manner in both objects.

The extraordinarily complete painted scheme of the panel (21-1869) gave rise to some initial suspicion; however, examination of the surface suggests that the paint layers are original. Retouching was only found in a few areas prompting a closer examination of the cassone (8974-1863), which had no extensive conservation and cleaning since its purchase in 1863. There are indications of an earlier cleaning campaign and modification of the lid. A surface cleaning was proposed and carried out with dramatic results (Figure 3). The cassone was first dry surface cleaned with a soft brush and small sections of micro-chemical sponge. An aqueous treatment using a 3% solution of tri-ammonium citrate at pH 8, as well as a 2% solution of triethanolamine (TEA) was chosen to remove accretions and surface grime. Solutions were applied with cotton swabs and cleared with de-ionised water.

The treatment provided information affirming the original condition of the cassone structure, as well as the presence of original paint layers and surface decoration. The surface cleaning also revealed the individual heraldic devices of the commissioning families, being held aloft by angels on the predella-like base. The newly conserved condition and fresh examination revealed that the two cassoni are nearly identical in the paint layers, the pastiglia work, tooling, gilding, composition, wood and joinery. In addition there is evidence in the impresse on the two panels that confirms them as part of a matched set from the same wedding commission. They both show the emblems of the chained leopard from the groom's family and the griffin of the bride's family. When viewed as pendant objects they illustrate the full wedding procession, from the meeting of the two families, to the final marriage ceremony. The reverse of the full cassone was also shown to be painted in the leopard spot pattern of the groom's impressa . 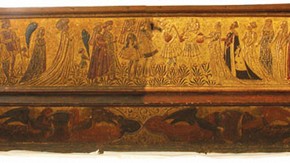 The objects treated under the fellowship will be on display from 2009, and the pendant cassoni will be exhibited together for the first time in the new Medieval and Renaissance galleries. The fellowship has been an excellent opportunity to expand the body of knowledge related to Museum objects, and to provide additional support and manpower for the conservation of paintings under V&A FuturePlan. From a personal perspective the year has provided a deeply enriching experience, allowing for the development of a specialist expertise in the conservation of cassoni panels, whilst creating an opportunity to work in a cross-platform environment with the V&A staff and collections.

I am grateful for the assistance and expertise of Nicola Costaras, Mark Evans, Christine Powell, the Paintings Conservation Studio, Carolyn Sargentson, the Research Department, and all of those people who assisted with the project from the V&A curatorial departments, Medieval and Renaissance team, Furniture Conservation and Gilded Furniture and Frames; as well as valuable discussions with Caroline Campbell and the many other professionals who added their time to this project. Special thanks to the Samuel H Kress Foundation for funding the project.