One of the Victoria and Albert Museum's key objectives is to increase access. This is reflected in an extensive public programme of FuturePlan projects, exhibitions, displays and loans.  Due to limited resources this philosophy has challenged conservation to focus on the standards of work we apply to objects depending on the type of display. For example, objects going on permanent display, in high-profile FuturePlan galleries, may require more interventive conservation than an object going on loan where the key factor is stability and suitability to travel. 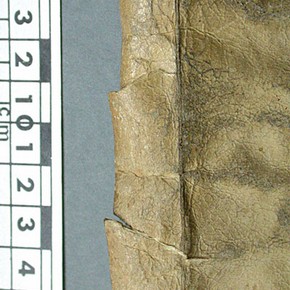 In response to this, and ever the advocate of adopting simple, more efficient solutions to conservation problems and in order to limit interventive treatments, I am always open to suggestions and looking for new techniques. This is not, as some believe, due to lack of skills on the part of the conservator, but merely a pragmatic response to a modern-day necessity - the pressure on museums to allow access and the role of conservators to facilitate this objective cannot be ignored.

In 2006 four books from the V&A collection were part of the exhibition Leonardo Da Vinci: Experience, Experiment and Design held at the Museum, which opened on 14 September of that year.  One of these was De Divina Proportione, (Pressmark 87.B.30), printed in Florence in 1509 and bound in a limp vellum binding.  The book was in fairly good condition apart from various tears to the cover including one on the front yap and two on the back (Figure 1), with some skinning running horizontally from the edge.  It was deemed necessary to repair these tears in order to minimise the possibility of them extending onto the covers through handling.

A decision was made to limit treatment and find a suitable non-interventive method.  It was at this point, in discussing possible repair techniques, that my colleague Merryl Huxtable, Senior Paper Conservator, suggested the use of a strip of an appropriate weight parchment slipped into the fold of the yap may be sufficient to support the tears.  After consideration and assessment of the suitability of such a repair, the idea was adopted.

Parchment of the correct weight was found, cut into strips slightly narrower than the yap and toned using acrylic paints.  The ends of the parchment strip were then rounded and inserted into the fold of the yap
(Figure 2). 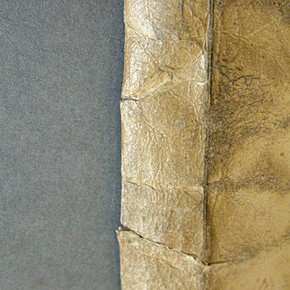 Where skinning to the tears had occurred a film of isinglass, re-activated with moisture, was used or a dry wheat starch paste (Figure 3).  The front tear also had a weak area which was supported onto the parchment strip using an isinglass-coated Japanese tissue. This simple method appeared to be perfectly adequate in meeting the aims of the treatment without compromising the original appearance of the object.  Any adhesive used was minimal allowing the repair to be easily removed if necessary.

My special thanks to Merryl Huxtable for making the repair suggestion.