Over the past 10 years the Conservation Department has encouraged and worked with a number of students from the RCA/V&A Conservation Programme with a view to gaining a better understanding of the materials and techniques of Tudor portrait miniatures. This research has involved a multi-faceted approach to the examination of the miniatures, including analysis, source research, computer visualisation and reconstruction.1 This work has been highlighted by recent research which applied this approach specifically to the materials and techniques of Hilliard's portrait miniatures.2  Collaboration with curators is valuable as they can provide significant information on the background and provenance of objects. It has also been important for the researcher to be based in a conservation studio, thereby gaining from the conservators' knowledge of the materials and techniques employed to make and restore miniatures in the past. Conservators often have a deep knowledge of materials and techniques but also an understanding of damage and an ability to recognise past restorations, all of which can inform the researcher.

The opening of the refurbished British Galleries in 2001 and the new International Music and Art Foundation Gallery of Portrait Miniatures in 2005, increased opportunities for detailed examination of the National Collection of Portrait Miniatures, which is held at the V&A. In particular, many important Tudor miniatures were unframed for examination, analysis and conservation. They included iconic works by Nicholas Hilliard such as Young Man Amongst Roses, the Drake Jewel , (which contains a portrait of Queen Elizabeth I), Hilliard's self-portrait and the portraits of his wife, Alice, and his father, Richard.

Sixteenth and seventeenth-century treatises have provided us with recipes and descriptions of materials and techniques that can be compared with each other and with the miniatures. We are fortunate in that Nicholas Hilliard, who is perhaps the most well-known Tudor miniature limner (painter), wrote A Treatise Concerning the Arte of Limning   around 1600 in which he describes in detail many of the materials (including pigments) and  techniques used.3

Examination and analysis of known Tudor miniatures, using the naked eye and various instruments from a simple binocular microscope to a Raman spectrometer, has proved essential in building up an objective database of the materials used and has confirmed the use, or not, of various pigments mentioned in the treatises. Passive techniques such as non-invasive, non-destructive Raman microscopy can be used for in-situ pigment identification.4 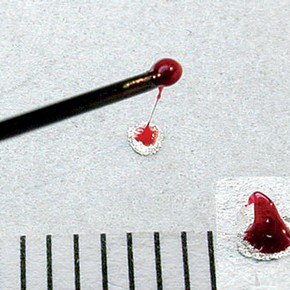 Reconstruction can inform the researcher in a very practical way. The treatises and the examination of the miniatures themselves do not always complete the story. We can still be left asking ourselves the question 'How did they do that?' For example Hilliard is quite secretive about the painting of his 'artificial' rubies. Examination of the objects and reading of other treatises only partially reveal the technique.  First a reflective base of silver is painted and then burnished. On top of this is placed a tiny blob of coloured turpentine resin using a hot needle. However, attempts to reconstruct this technique failed to produce a smooth blob as a tiny tail of resin is left behind by the needle (Figure 1). Studying other treatises suggested the need to apply heat from a fire to the miniature without explaining why. During reconstruction we found that the heat source allowed the resin peaks to melt into the smooth shape of the gem. Only the practical experience gained from reconstruction gave this insight.

Practical trials such as the reconstruction of artificial rubies have indicated that there are many things that we do not always observe on the originals and, equally, information in the treatises that is misunderstood. An important role of reconstruction or 'practical exploration' has been to point out possibilities - for instance that the mineral blues (e.g. azurite)  can be improved by the addition of blue dyes such as indigo as suggested by some written sources.. Some aspects of these possibilities or theories were tested using Raman analysis. For example, the analysis of the blue backgrounds on known Hilliard miniatures indicated that pure azurite and natural ultramarine had been used - there was no trace of indigo. Therefore the theory that blue dyes had been used to improve the colour in Hilliard miniatures could be dismissed.

In conclusion, the reconstruction of a portrait miniature has generated many questions and has highlighted areas of interest which escaped our attention previously. Instrumental analysis has been able to answer some of these questions. The practical application of some of Hilliard's methods, as described in his and other treatises, also demonstrated that even seemingly simple techniques such as the painting of a uniform smooth blue background might require extensive research as well as many practical attempts to approximate the skills and experience of a professional limner. This has increased our appreciation for the abilities of the artists. It has also helped us to be able to associate various techniques with certain artists.

The findings and ideas derived from the reconstruction work were not generally conclusive in themselves. They suggested possibilities rather than final answers. However, this highlights the value of reconstruction as a practical tool to provide a basis for scientific experiment. Like a filtering process, it can extract specific questions and relevant variables and so may help us to choose the right research path.