‘X’ Marks the Spot: The conservation and correction of a Carlo Bugatti Chair 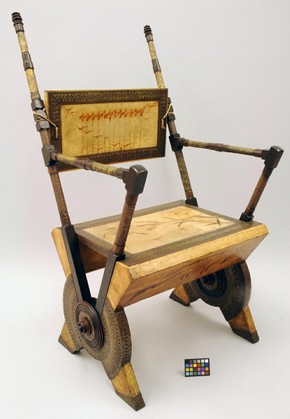 Carlo Bugatti, born in Milan in 1856, is best known for his innovative furniture and interior design, which are characterized by their use of unusual materials and decorative motifs. Bugatti had an artistic background, his father being an architect and sculptor. His sons carried on this tradition, Rembrandt becoming a sculptor of some renown and Ettore, a car designer, founding the Bugatti automobile company. Around 1880, after training in architecture and cabinetmaking, Carlo Bugatti opened his own studio in Milan and began to produce furniture. Its inventive and theatrical construction gradually evolved from dramatic rectilinear shapes to more fluid forms. This furniture was unique in its time and remains so today. For decoration Bugatti drew inspiration from Far Eastern and Islamic art, incorporating more free-form motifs from the former to combine with geometric patterns influenced by the latter.

Early in his career, Bugatti began collaborating with artists to experiment with painted vellum. He used vellum not only to cover the wooden construction of his furniture but also as a structural element. By the time Bugatti exhibited at the Turin Exhibition of 1902, he was producing entirely vellum-clad furniture, exemplified by his Cobra chair. Other unusual materials were used to embellish Bugatti’s furniture, including brass pressed with geometric patterns, pewter and other metal inlays, silk cords and tassels, ivory, and mother of pearl. Shortly after the Turin exhibition, Bugatti sold his Milan workshop and moved to Paris, where he began to create cast metal works in addition to continuing his furniture design. He retired in 1935 after a period of decreased activity and died in the French countryside in 1940.

Figure 2 - Seat back, before treatment, showing toning of old losses to the finish as well as recent losses

The V&A armchair (W.10-1968) was conserved for the new Furniture Galleries. Drawing from the Museum’s wide-ranging international collection, these galleries will focus on the materials and techniques used to create and decorate furniture from the 15th century to the present day. This chair, made between 1895 and 1900, typifies Bugatti’s use of non-traditional materials, and was chosen for the central section of the Gallery, which will display a selection of star objects in chronological order (Figure 1).

The chair is made of partly-ebonized and turned walnut, partially clad either with brass sheet pressed with geometric patterns and either wrapped or attached with pins or vellum glued directly to the wood. The seat and seat back have been achieved by stretching vellum across a timber frame. The vellum on the seat back, seat, and front apron display painted floral motifs. The seat back is held between the rear stiles with silk cords. The leg construction comprises a large ‘X’ on either side of the chair. The slanted arm supports and rear stiles rest on the inner edges of the upper half of each ‘X’, coming to rest around an axis placed at its intersection. The two axes are held in place by a series of turned wooden and pressed brass bosses which are applied to either end of the axes. 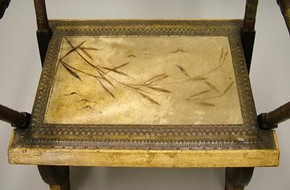 There were three main conservation challenges presented by the chair. Significant areas of vellum were delaminating from the wood, with a number of associated losses. A darkened natural resin varnish applied to the vellum was quite fragile, with many old toned losses now dirty and discoloured, as well as numerous recent losses. Because they exposed the white vellum underneath, these new losses were visually disruptive (Figure 2). A further conservation challenge was fundamental to the legibility of the object: at some point, the arm construction, which includes the seat back, had been removed and replaced in the wrong orientation. Essentially, the chair was backward, with the painted seat decoration appearing to be upside-down (Figure 3).

Treatment was commenced by vacuuming surface dirt with a soft brush. Vellum and metal elements were further dry-cleaned with Chemsponge, a dense latex dirt-absorbing sponge, prior to re-adhering the delaminating vellum. Rabbit skin glue (1:15 in dionized water) was selected as this would gel quickly, minimizing potential expansion of the vellum due to the water content. Clamping the many nonparallel surfaces was difficult, and a series of jigs were devised which were held in place with bicycle innertubing. The seat back being attached with old, though possibly not original, silk cords, could not take the weight of any clamping system, so a hydraulic trolley was raised to the level of the seat back for support during clamping. Though the vellum finish was uneven and heavily restored, with extensive toning of losses directly onto bare vellum, there was no evidence to suggest that it did not include original passages. The decision was made to leave existing finish untouched. Instead, recent finish losses which exposed white vellum were given a barrier coat of 10% Paraloid B-72 in xylene before being toned to match surrounding discoloured finish. This was accomplished with Golden liquid acrylics which were chosen for their light stability and retreatability, characteristics not shared with the now-discoloured watercolours used for previous toning. In addition, the layered structure of the toning would prevent dirt from becoming engrained in the pores of the vellum. 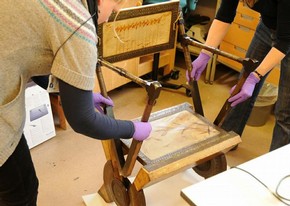 It was decided to correct the arm construction, even though the chair was backward at the time of purchase, as the upside-down seat motif clouded proper interpretation of the object. In order to reverse the arms, the centre of the ‘X’ had to be dismantled. Fortunately, the outer bosses were relatively straightforward to remove from the axes, which were otherwise loosely fitting. Subsequent removal of the axes freed the ends of the arms and stiles, which were held in place by being shaped around the axes. Two people were then able carefully to lift the entire arm-stile-seat back construction out of the chair in such a way as to avoid tension on the silk cords retaining the seat back, then rotating and replacing it in the correct orientation (Figure 4). The axes and bosses were then replaced.

Appreciation and understanding of the chair has been much improved due to the more coherent appearance of the vellum and the correct orientation of the painted seat.