In 2010 the Museum gained a significant new acquisition intended for display in the Robert H.N. Ho Family Foundation Gallery of Buddhist Sculpture at the Victoria and Albert Museum: a seated figure measuring H. 85 cm x W. 62 cm and weighing 80 kilos, seemingly one of the largest surviving works representing Mahasiddha Virupa (IS.12-2010), the ninth century Indian Buddhist ascetic (Figure 1). It has been identified as Sino-Tibetan; the technically brilliant quality of the casting and the elaborate detail indicates Imperial excellence and it was probably produced in the Imperial Beijing workshop of the Yongle court, dating from 1403 to 1424. Radical teachings of Mahasiddhas were significant in the origins of Tibetan Buddhism, which became favoured at the court of Emperor Yongle. Metal sculptural representations of the Tibetan pantheon (mostly smaller in size) were commissioned and sometimes exchanged with Tibetan religious leaders, of which Mahasiddha Virupa is a significant member of the group. Few survive so this rare sculpture is regarded as an immensely important Yongle Period, Chinese work of art. 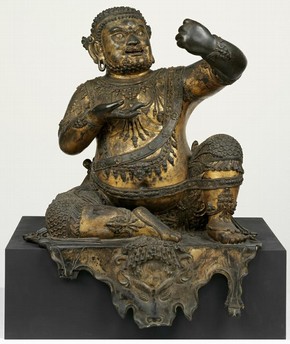 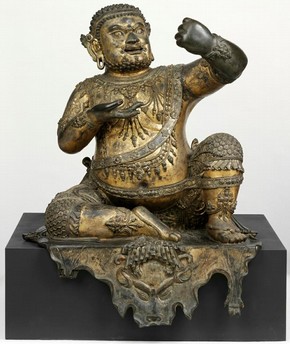 Historic records reveal that during the nineteenth century the sculpture was purchased in Japan, apparently by an English family believing it to be of Japanese origin. Virupa resided in their home until it was passed to the Holburne Museum in Bath, where it was in store since 1939. As the only example of Asian sculpture in an exclusively European collection, the Holburne Museum could legitimately de-accession the object and make way for its acquisition by the V&A with the help of a generous donation by the Robert H.N. Ho Family Foundation.

Several intriguing aspects called for a more detailed investigation: vestiges of painted decoration remain on the facial features and the blackened hair; empty holes indicate the loss of elements such as a garland of flowers that would have swathed the head and what is thought to have been a skull cup, held in the left hand. (1) (2)

Questions arose immediately after the first inspection of the Virupa: what could be deduced from the style and the techniques used for the manufacturing process and the unconventional surface finishes? What constituted historic repair and possible alteration? What methods could be best used to analyse and conserve the sculpture? A better understanding of these factors would further the existing knowledge of Yongle-period temple sculpture and inform decisions over its display and interpretation. To help address these issues, it was decided to combine traditional curatorial and visual examination with a thorough investigation of the sculpture using some of the analytical techniques available in house at the V&A: X-radiography, X-ray fluorescence (XRF), optical microscopy, Fourier-transform infrared spectroscopy (FTIR) and Raman microscopy. 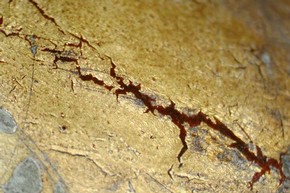 The Mahasiddha Virupa was initially assumed to be made of cast copper alloy, probably bronze with a mercury-gilded surface, albeit worn and blackened. Yet, the visible gilding has an unusual appearance, darkened, crizzled and dull (Figure 2). Much of the surface is heavily worn and scratched and large areas are hidden under an irregular brown layer. This was later identified as gold leaf on a red substrate (Figure 3). The facial features were enhanced with painted lips and tongue using vermillion, red lead and carbon black; and finely painted black eyelashes are also visible. These materials are traditional pigments used for centuries and therefore it is not clear if the paint scheme was applied all at the same time, and when.

Close visual examination and X-radiography partially revealed that the Mahasiddha Virupa was cast in several sections; the head, body and legs appear to be one, the hollow, left arm was attached separately and partly filled with core material. There was an unsightly open joint where the left arm is attached to the shoulder. X-rays indicated an inner reinforcing ‘sleeve’ fixed with long nails.

As well as the apparent attachment of the left arm, more recent damage showed as several disfiguring abrasions on the left hand. Embedded in the hair was a grey material which, after analysis, seems to be mortar. There was compression of the metal hair curls and an orange-coloured matter which matched the composition of brick dust. The location of the damage and deposits was consistent with the sculpture having been struck with considerable force.

Various areas of the sculpture were investigated by XRF in order to verify the composition of the alloys of all the Virupa’s components. The XRF analysis revealed that the main components of the alloy of the body are zinc and copper, making this a brass. This is not surprising as fine quality casting of brass had been developed in South and East Asia far earlier than in Europe. The left hand and forearm were also analysed: stylistically the left hand is a puzzle as most traditional depictions of this character show his index finger pointing skyward. The hand was found to be made of a different alloy containing mostly copper with some zinc, tin and lead. This supports the hypothesis that this hand and the arm from the elbow down may be a later addition - although accurate dating is problematic.

A purpose-made frame enabled the object to be placed safely on its back to allow viewing of the underside and the hollow interior. The underside of the figure has been accurately cut to be inserted into the substantial, cast base plate with no obvious solder around the joins. The cavity was explored using a Dyno-lite USB digital hand-held microscope, enabling photography of otherwise inaccessible areas. As is customary with devotional Buddhist sculpture, the cavity would have contained amulets and prayer scrolls, packed with organic material. Regrettably the contents have long been lost, as was the metal cover used to seal it, but loose straw and hair located inside are now being subjected to further analysis. 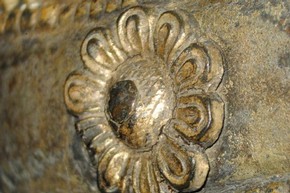 Figure 4 - Detail of a repousséd copper flower attached to the front of the gilded brass belt. Photography by Diana Heath

Scrutiny of the figure showed that elements of the complex adornments were made and attached separately, for example bows on the belt and headdress. Of note is the armlet on the left upper arm, formed from copper sheet using the ‘repoussé’ technique (i.e. shaped by hammering from the reverse side to create a design in low relief) and nailed on, as confirmed by X-ray; and the meditation belt (worn to hold parts of the body in yogic positions), running continuously across the chest and back, around the waist and left knee. The XRF analysis of metal micro samples revealed that a front section of the belt was made from high purity copper sheet which had been ‘raised’ and repousséd to form the ‘be-jewelled’ decoration and nailed on. However, most of the meditation belt is made of brass. Most unusually, the single flowers adorning the diagonal part of the belt were individually repousséd, then cut from copper sheet less than 1mm thick (Figure 4). Each flower was attached with a round headed nail yet not all the tips are visible inside the cavity; however, substantial nails fixing the belt to the body of the figure were located inside the object, running through from the front, varying in shape and thickness (Figure 5). The location and form of the fixings indicate these elements are all part of the original structure, creating an unusual combination of cast and fabricated elements. 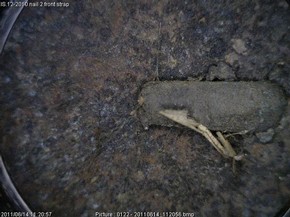 Figure 5 - Detail of a nail attaching a flower to the belt, viewed from the inside, with a piece of dried grass trapped under it. Photography by Diana Heath

In light of these discoveries, it can be suggested that perhaps the entire sculpture (with the exception of the hair) was covered in gold leaf on a red substrate containing vermillion, in order to unify the different coloured alloys and to seal and disguise any joints, resulting in a gleaming cohesive effect.

Our studies have revealed that the Mahasiddha Virupa was originally intended to appear as a richly embellished figure for worship, but initially presented itself in a dirty and disfigured state to the extent that it seemed considerable areas had lost all gold surfaces. With improved understanding of the alterations and damage, the decision was taken to remove as much as possible of the dense dirt and the thick, irregular wax (identified by FTIR as pigmented beeswax or microcrystalline wax) in order to reveal as much as possible of the remaining gold leaf, given that the leaf has ‘shrunk’ from the under layer in many places. Fortunately, cleaning tests under the binocular microscope confirmed the gold leaf remains stable and is well-adhered to the substrate. A combination of hydrocarbon solvents, emulsions and enzyme cleaning removed the carbonised dirt and a lot of the waxy deposits. The open joints were filled and surface damage on the left arm was touched in with acrylic pigments.

Working on this remarkable sculpture has revealed some unexpected aspects with some riddles yet to be solved. There remains a level of additional analysis to be undertaken and comparison with examples of Yongle metal sculpture is ongoing. Mahasiddha Virupa represents the value of utilising in-depth visual examination, a range of scientific analysis of materials together with the available historical background, thus enabling the appropriate conservation treatments and assisting more accurate technical and historic interpretation of an intriguing and unusual sculpture.

We are grateful to Dr. John Clarke, Curator, Asian Department, and Beth Mckillop, Deputy Director, for their curatorial advice and support, the Robert H.N. Ho Family Foundation for their generous support, Paul Robins for X-radiography, Richard Davis for the painstaking photography and all other colleagues who gave valuable advice.