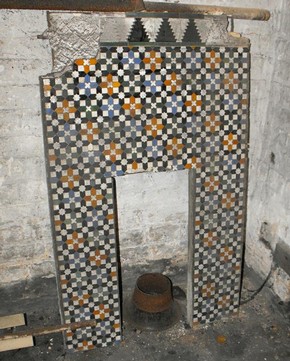 Figure 1 - Fire surround in the basement, 2009. Photography by Mariam Rosser-Owen

In 2009, curators in the Word & Image and Asian Departments revisited the V&A’s rich collections relating to Owen Jones, with a view to formulating an international touring exhibition (Owen Jones: Islamic Design, Discovery and Vision) to celebrate the bicentenary of his birth in 1809. Jones, one of the foremost design theorists of the Victorian age and a friend of the Museum’s first director Sir Henry Cole, played an important role in the formation of the collections. He is best known for his lavish publications: Plans, Elevations, Sections and Details of the Alhambra (1836-45), the first volume to bring the Islamic palace of the Alhambra in Granada to the attention of the British public; and The Grammar of Ornament (1856), a design sourcebook which has never gone out of print.

The V&A holds many of Jones’s designs including original drawings for these publications and for his work on the Crystal Palace which housed the Great Exhibition of 1851. The Museum also holds a number of plaster casts used by Jones to recreate the Alhambra’s Court of the Lions. This ‘Alhambra Court’ was one of the ten Fine Arts Courts created for the Crystal Palace when it was re-erected at a new site in Sydenham in 1854, where it remained until its destruction by fire in 1936.

Tile mosaic dadoes by Minton & Co, based on Jones’s pencil and watercolour sketches made on site at the Alhambra, largely survived this fire and were carefully salvaged by local ladies. Many were made up into fire surrounds which were sold at local church fêtes. One of these was bought by George Eraut, owner of a house facing the site of the ruined Crystal Palace. At some point in the 1950s, when Victoriana had gone out of fashion, it was rather roughly stripped out and left to languish in a basement (Figure 1). It was rediscovered in 2008 on the death of the house’s then owner, Mrs Gunnvor Stallybrass, and kindly donated to the V&A by her family.

The fire surround (C.350-2009), the largest section of the Alhambra Court’s original tile decoration to have survived, arrived in the Museum in a badly damaged condition. The small glazed earthenware tiles were embedded in a variety of hard mortars. Reinforcing iron rods in the mortar had corroded, resulting in expansion cracks that had pushed a number of tiles off the surface. Many of the detached tiles were firmly attached to sections of mortar; others were broken or chipped.

As the backing no longer provided sufficient support for the tiles, significant interventive treatment was needed to ensure their safe display. After their removal and treatment, it was proposed to use a  routine re-backing method on lightweight boards (Hexlite® 620, to allow for ease of transportation and installation. (1) However, adaptations to the technique needed to be made to accommodate the quantity and physical differences of the small tiles. 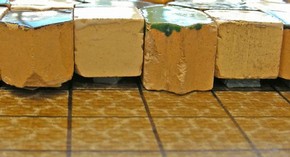 Figure 2 - 'Spacers' inserted between tiles and board raise tiles to a uniform height. Photography by Fi Jordan

The tiles vary in thickness considerably (between 5 to 16 mm). On the fabric of the building, this did not pose a problem as they would have been pressed into the mortar to a required depth, ensuring a uniformly smooth surface. The options of embedding the tiles once more, or using a mosaic backing technique (turning them face down and applying a levelling material to the back), were considered. Tests showed that the tiles were not ideally suited to these methods without extensive preparation. The most satisfactory test result came from the use of ‘spacers’ to raise a tile to a height of 16mm (Figure 2). Acid free card or Multi Purpose Polyfilla® (calcium sulphate hemihydrate with cellulose ethers) squares of different thickness were bonded to the tile backs with Paraloid® B72 (ethyl methacrylate/methyl acrylate copolymer) in acetone (barrier layer 10% solution; bonding 20-30%). The spacer is smaller than the tile, allowing good contact between the primary bonding adhesive (Araldite® 2015 epoxy), tile and backboard.

Prior to the bonding process, a team of conservators worked on different treatment aspects, closely assisted by a technician to construct the backboard and fixings. Slow mechanical removal of the tiles from the unsound mortar, using a range of stonework chisels, mallets and scalpel blades, was required to ensure that the tiles were put at the least risk of further damage (Figure 3). 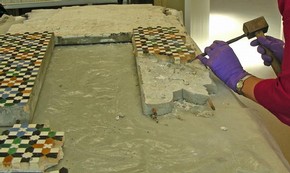 Figure 3 - Removal of tiles from backing. Photography by Fi Jordan 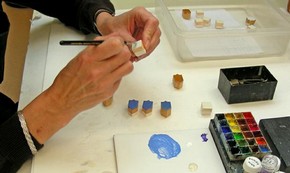 Partial or full reconstructions were made of damaged and missing tiles. Gaps in the design were filled by casting replacement tiles in modelling plaster using silicone rubber moulds taken from original tiles (Figure 4). The preparation of the backboard (such as pre-drilling holes for fixings to walls and other components) is integral to the success of the mounting method. 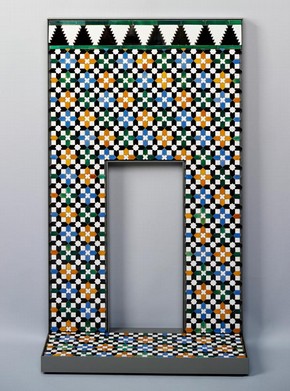 The main treatment challenges arose from the quantity and irregular depths of the tiles. The project showed that an established backing method could be simply adapted to provide a successful and cost-effective result. The restored fire surround (Figure 5) made its display debut at the Nasjonalmuseet, Oslo, in January 2011, after which the exhibition travelled to the Alhambra Palace in Granada, providing a chance to reunite Jones’s work with the monument which first inspired it. After visiting further venues in Sharjah, UAE and possibly Korea, the fire surround will return to the V&A and take up permanent residence in the new Ceramics Galleries.

The V&A would like to thank Dr Jan Piggott, who first brought this fire surround to our attention and facilitated its acquisition.