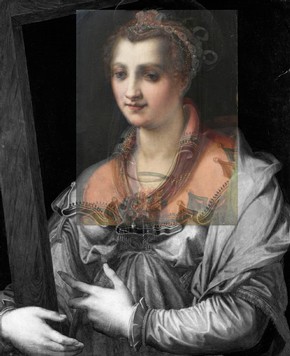 ‘Portrait of a Lady’ (V&A museum number Dyce1) was painted by Francesco Morandini, known as ‘il Poppi’ around 1570 in Florence. It entered the Paintings Conservation Studio in 2011 to be examined and treated in anticipation of its inclusion in a display (Technical Art History and Connoisseurship) to be held in spring 2013. The portrait is one of a number of paintings which have seen their attribution and art historical background corrected and updated during the revision of the V&A’s foreign paintings catalogue.

One of a group of five paintings representing the same figure in a similar composition, the work depicts a bust portrait of an elegant lady wearing a pale green dress, purple shot green silk cloak and a pink and green shoulder-length mantellina (a short cloak or cape ‘for the neck’ or ‘for the shoulders’. (1) In her golden hair is a sophisticated headdress decorated with gems and green ribbons. A thin veil with a gold-threaded decoration is attached at the back of the headdress centrepiece and is gathered behind the cartouche-shaped brooch on the lady’s cape.

Discussions with Clare Browne, Curator of Textiles and Fashion, and Richard Edgcumbe, Senior Curator of Sculpture, Metalwork, Ceramics and Glass, have confirmed that the lady in the portrait is dressed in a manner which is consistent with 1570s Florentine fashion.

Examination of the V&A portrait, and comparison with the four other extant versions, strongly suggest that the painting was, at some stage in its history, reduced in size. The reason behind this reduction is unknown but we can speculate that its purpose was to remove religious iconographical features in order to create a secular portrait. A version of the painting in the Walters Art Museum in Baltimore depicts the lady as St Helena with the cross (Figure 1) and a further version sold by Sotheby’s (2) depicts St Catherine with her wheel.

The work is painted on a single poplar board (54.7x41.8 cm) using materials and techniques which are typical of sixteenth-century Italian panel painting. Thick layers of gesso, identified as the anhydrite form of calcium sulfate, were initially applied to the wood support. This form of calcium sulfate is usually used for the preparation of gesso grosso.

Interestingly, an animal-glue size layer was also identified in paint cross sections between the gesso ground and the paint layers above (Figure 2). The size layer served to seal the gesso ground in order to create a less absorbent surface for painting. This technique is not uncommon for sixteenth-century Italian painting practice and was identified during the technical examination of Bronzino’s ‘Allegory’ in the National Gallery. (3)

Figure 3 - Tenting and flaking non-original paint (above), during removal of the fill and insect remnants (centre), damaged wood before filling (below). Photography by Gabriella Macaro

The painting had suffered from wood-boring insect larvae eating through the panel, creating channels in the wood. The infestation was no longer active but the damage was extensive throughout the panel in varying degrees of severity. In certain areas, this undermining had resulted in the loss of the original ground and paint, for example, the sitter’s proper right collar. A past attempt to treat this area was restricted to the restoration of the surface layer. Large voids in the wood were still partially filled with crumbling frass and insect remains (Figure 3). Therefore, the area of fill and retouching was unstable with considerable tenting and flaking due to a lack of underlying support. Examination of the beetle wing cases, droppings and cocoons allowed for the identification by entomologist David Pinniger of the European species Nicobium Castaneum. This species, rarely found in the UK but abundant in countries such as Italy, provides evidence that the painting was almost certainly attacked by the insect prior to its departure from its country of origin. Once cleaned, the overall appearance of the original painting was greatly improved and the tonal balance regained. The fill and insect remnants were meticulously removed leaving a large area of missing wood in need of structural repair. The damaged wood was first consolidated with two layers of 30% w/v Paraloid® B72 in Shellsol™ A. In addition to consolidating the weakened wood fibres, the layers of resin would also act, to some extent, as a release layer between the original wood and the filling material.

Potential filling materials were discussed with panel specialists and members of staff from both Furniture and Sculpture Conservation Studios at the V&A. An epoxy resin (Araldite® AV1253 and HV1253) was chosen for its ability to match, as closely as possible, the physical properties and mechanical behaviour of the original wood support. Unfortunately, there is still no ideal conservation-specific adhesive for the repair of paintings on wood panel and although epoxy resins are essentially insoluble once cured, this particular paste has a number of desirable properties which made it suitable in this instance. It is designed specifically to have a similar density to wood, does not shrink, and is easily carved. The repaired areas were subsequently filled and retouched using dry pigments ground in Paraloid B72 (Figure 4). Reintegration of the large area of damage was a challenge since no photograph of the painting prior to the woodworm attack exists. Fortunately it was possible to follow almost all the existing lines of the composition which connected on either side of the damage. In addition, a virtually identical version of the painting (5) was used as a guide for inpainting the largest losses. 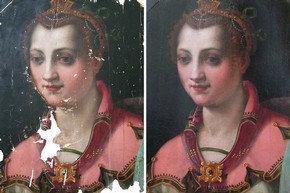 Figure 4 - Portrait of a Lady before and after retouching. Photography by Gabriella Macaro

The technical examination and treatment of this sixteenth-century Florentine panel has been a challenging and rewarding project which spanned many months of my invaluable year-long internship at the Victoria & Albert Museum.

I would like to thank Nicola Costaras, Head Paintings Conservator and Ana Debenedetti, Assistant Curator, for their guidance throughout this project.