Treasures of the Royal Courts: About the Exhibition 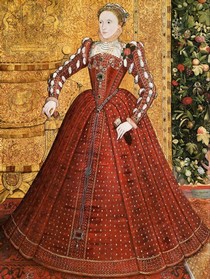 This exhibition showcased the majesty of the courts of Henry VIII and Elizabeth I to Ivan the Terrible and the early Romanovs. From royal portraits, costume and jewellery to armour and heraldry, Treasures of the Royal Courts told the story of diplomacy between the British Monarchy and the Russian Tsars through more than 150 magnificent objects.

A rarely-shown painting of Elizabeth I, Shakespeare's First Folio, a suit of armour tailor-made for Henry VIII and the legendary ruby-studded Drake Star revealed the spectacular world of kings, queens, merchants and courtiers from 1509 to 1685. At the heart of the exhibition was the beautiful English and French silver given to the Tsars by the British royal family, on exclusive loan from the Moscow Kremlin Museums in celebration of 500 years of Anglo-Russian exchange.

Treasures of the Royal Courts: Tudors, Stuarts and the Russian Tsars was supported by the Friends of the V&A. With further support from Summa Group. With additional thanks to Vnesheconombank.

The 'Union' Centrepiece by Miriam Hanid (right) is a contemporary response to the Dolphin Basin (below-right) made in 1635 by Christian van Vianen, goldsmith to Charles I. The piece was commissioned specially for the Treasure of the Royal Courts exhibition.

The Dolphin Basin has a raised, wavy undulating rim in the form of two dolphins, the heads of which come together on one of the shorter sides, water appearing to stream from them into the dish. Among the waves on the bottom can be seen a dolphin pouncing on a smaller fish. This dish, raised and chased from a single sheet of silver relies on contrasting burnished and matted areas to add to the illusion of rippling water.

‘Union’ is made from a single sheet of silver. In the design, Hanid combines the forms of fish fins and tails with the patterns they create in water, an appropriate subject for the centrepiece for a dining table. 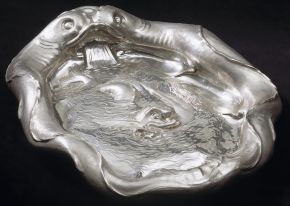 Miriam Hanid is a young silversmith with a growing reputation for flat-chased decoration, a technique whereby the front surface of the silver is raised by indenting (punching) it on the reverse using a variety of shaped steel tools and a chasing hammer. Hanid’s inspiration for this chased decoration is often drawn from the movement of the waves along the Suffolk coast, close to where she lives and works.

The fluid qualities of the centrepiece suggest the transitory nature of historic, English silver. Silver was often melted down, either to be remade in a newly fashionable style or for its bullion value to pay a debt.

The lightbox below shows some of Hanid's sketched designs for the piece.

Visit Miriam Hanid's website for more information about her work.

Matching images from Search the Collections