Aspects of the role of Lead Conservator 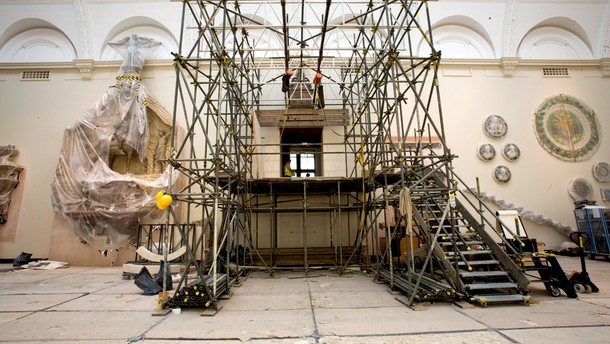 The Medieval & Renaissance Galleries project is one of huge ambition, encompassing a large number of objects (over 2,000), a large number of galleries (10), the bringing of exterior space into internal use and the much-needed addition of circulation routes, as well as the redevelopment of staff facilities in the basement. The project is the culmination of Phase 1 of the Museum's FuturePlan, a series of redevelopment projects taking place throughout the site. FuturePlan Project teams are drawn from relevant departments within the Museum, and each member of the team has a specific role. The role of Lead Conservator is one that has been evolving throughout the progression of FuturePlan. Early on, the role took as its basis guidelines that already existed for temporary exhibitions, but the greater scope of gallery projects requires broader involvement with activities such as gallery decant and closure planning, membership of the Steering Group, or troubleshooting on practical object-related issues. Some of the responsibilities of the role are highlighted within this article.

As mentioned elsewhere in this journal (Motture, Frost), early stage planning began in 2002 to establish the intellectual rationale, and this included broad discussions between invited experts, curators, and educators around concepts and themes, as well as visits to external collections. The Project Team also conferred directly with individual conservation studios as part of the firming up of ideas. Content was developed into more concrete groupings until, in 2004, the Project Team had a clear enough idea of potential inclusions for conservators to begin their assessments for treatment. At this stage of a project, the Lead Conservator is working towards the creation of a conservation brief that reflects the proposed levels of treatment also taking into account the availability of resources, the nature of the objects, and the type of gallery. This includes trying to predict the need for analytical support for both treatment and research, and further input of the Science Section in areas such as environment and pest management.

In all, 4619 objects eventually made it onto the 'possible' list. Of those, 3200 were assessed, with 2032 finally chosen for display. It is a delicate balance to find the right point at which to start assessing objects - too early, and a lot of time is spent looking at objects that are dropped from the lists as ideas develop; too late, and pertinent information regarding display limitations or requirements is not to hand during decision-making processes. During the assessing stage, conservators from different specialisms log information that is then used to contribute to further development of gallery plans as well as the planning of conservators' work. The assessments take into account not only the recommended intervention, if any, and how long it might take, but also such things as the current mounting method, the environmental susceptibilities, and whether the object needed conservation before photography. One development during the evolution of this project is that, in addition to the treatment assessments, time required for thinking and discussion needs to be accounted for - this is now added in order to help the Lead Conservator to the full implication of resource allocation, and also to fully reflect the Department's input to a FuturePlan project.

Within a project of this size, where 73,000 hours of treatment time had been proposed for the chosen objects, it was important to be sure that resources were efficiently used. Those objects which apparently had a high number of treatment hours associated with them had different options for treatment proposed and discussed with curators. While some treatments remained as assessed, a variety of solutions were found for others: the proposed scope of some work was challenged and intervention scaled down; some work was undertaken by external conservation companies; short-term contracts were created; and in some cases, the objects chosen were exchanged for similar objects requiring less input. Generous benefactors also supported the treatment of several objects. During this period, the Lead Conservator needs to maintain an overview and aims to ensure a balance is met between the expectations of different parties.

The central logging by conservators of object-related information, particularly in a project that covers a wide range of specialisms, aids the Lead Conservator considerably in gaining a broad picture of requirements and conditions that can then inform further discussions and planning with the Project Team. With the medieval and Renaissance display, the Galleries will have a passive approach to the environment, wherein maintenance of relative humidity within required parameters will be achieved by combining the use of internal heating with external air conditions through strategic ventilation, rather than installing conventional air-conditioning (Bingham and Walker; Pretzel). This, coupled with the aspiration to have as many objects as possible on open display, meant that early recognition of which of the objects were the most vulnerable was paramount. The database aided the swift identification of those objects, as well as the definition of which type of display environment was necessary for them: allocation of cases could follow accordingly. The project has provided us with the opportunity to challenge our own perceptions, particularly when it came to environment and objects on open display: We have worked with predictions of expected outcomes, our climate monitoring system will provide us with more information for analysis of the working galleries (Pretzel). Conservators wrote generic statements regarding display principles for each type of object within the new galleries. These were given early on to the architects as well as curators, to ensure they had relevant background information when it came to design of display. The project was to tell the medieval and Renaissance story in a new way: Whereas previously displays had been arranged more according to object type or material, the ambitious collocation of objects of all types required an approach that took into account the mixed nature of each display. As part of the consideration of how we would display the objects, new environmental guidelines for FuturePlan projects were written. Further opportunities for conservator feedback on design ideas came at other key design stages, with comments being passed on to the Project Team for inclusion in the client's response to the design.

As well as gathering information from the Conservation Department, the Lead Conservator's role is also to provide progress reports (Campbell) from the project to the Department, and in part, to represent the project to the Department. This means that the Lead Conservator has to be aware of the overall levels of conservation resource allocation. He or she is there to aid the delivery of that particular project, but there may be many other projects underway at the same time - work for Medieval & Renaissance Galleries project could not be seen in isolation. During the entire period, work was also going on in more than fifty other gallery spaces. The impact of this has to be accommodated, while at the same time the Lead Conservator has to influence the teams to ensure focus remains balanced. Faced with high demands from a variety of directions, the need for flexibility became ever more apparent. Conservators had to deal with changes in resources, requiring decisions about treatments to be revisited and proposals modified. The reduction in scope has not, however, meant a reduction in quality of input, as articles in this issue and the objects on display will amply demonstrate. Stability of objects has been the over-riding concern.

This project started early on in the evolution of FuturePlan and the development of the role of Lead Conservator has been concurrent. Clearly, each project will have differing scope and requirements, but the early inclusion of the Lead Conservator in each project is an important factor for ensuring timely contribution from the Department. The fact that each new project team is comprised of a fresh group of people can mean that lessons learnt on one project might not necessarily be transferred to influence a subsequent one. However, the sheer number of projects that have now been, and will continue to be, undertaken as part of FuturePlan means that we have the opportunity to gather together valuable conclusions from each. The development of a number of guidelines relating to projects is one reflection of this; another is the involvement of the V&A's Training and Development Department, who are developing different ways of communicating and embedding the learning, with, for example, short video interviews to be made available for all staff.

The wide range of objects included in this project has provided the opportunity to deepen understanding of conservation specialisms other than my own. As Lead Conservator I have had the privilege of working with a wide range of interesting and inspiring people both from within and beyond the Museum, as well as opportunities to develop negotiating skills, to gain insight into and appreciation of broader issues beyond my own concerns as a conservator, and to exercise (and influence) the maintenance of balance and of flexibility. This has been a demanding and stimulating project.

My thanks to Fiona Jordan, Alison Richmond and Sandra Smith for their thoughts and comments during the writing of this article.