Designs on the future: Developing the new Medieval & Renaissance Galleries

Figure 1. An early visualisation of new physical connections: The Palace and home and the Courtyard and Garden displays (©MUMA)

The development of a major project of the scale of the V&A's new Medieval & Renaissance Galleries is an exercise in collaboration, co-operation and organisation. Since July 2002, when a small team was charged with the enviable task of establishing the concept for the new galleries,1  to the opening in December 2009, a vast number of people with diverse expertise has brought the project to fruition. As the articles in this journal clearly demonstrate, the recasting has offered an exceptional opportunity for research and development on all fronts - conservation, curatorial, design, interpretative, scientific and technical. In order to set that research into context, this article will outline some of the key aspects of the development process.

The gallery project followed hard on the heels of the successful completion of the British Galleries, which opened to critical acclaim in November 2001 and won the European Museum of the Year award for its thematic approach to the displays. Our brief was to build on the success of the British Galleries by setting the Museum's outstanding collections within the broader context of European art and culture from 300 to 1600. These vary in scale from intricate jewellery to the high altar chapel from the Renaissance church of Santa Chiara in Florence. The displays incorporate a wide range of media, including sculpture and metalwork; ceramics and glass; books, prints, drawings and paintings; furniture and textiles. Each of the objects was assessed, photographed, catalogued and conserved. Not surprisingly, the logistics were challenging, involving extensive object movement and the reconstruction of complex and monumental works.

Our vision was to create stunning displays that showed the objects at their best, while providing visitors with the means to explore and learn at their own pace. Drawing on existing and specially commissioned research, our audiences were placed at the heart of our thinking, informing the interpretation and presentation of the material.2 The narrative framework was based around the collections themselves, supplemented by a few strategic loans generously deposited by individuals and other institutions. Amongst these is a changing display of the British Library's early manuscripts, paintings from the National Gallery and the Courtauld Institute of Art, and artefacts from the British Museum and Royal Armouries. 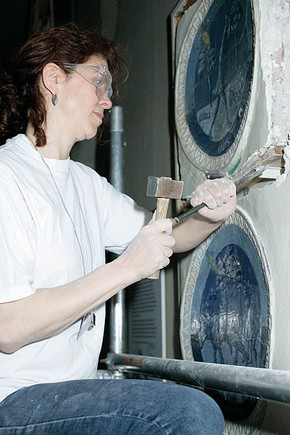 Figure 2. Removal of one of the della Robbia roundels from the old display (Photography by Sculpture Conservation). 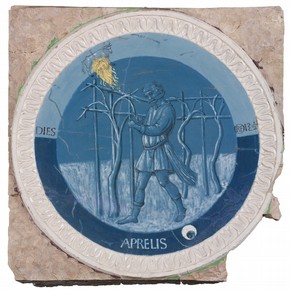 Figure 3. April from the Labours of the Months by Luca della Robbia (7635-1861). (Photography by Christine Smith, V&A Photographic Studio).

A combination of large- and small-scale galleries was chosen so as to allow the full range of objects to be displayed together for the first time. In spring 2003, the London-based firm MUMA were appointed as architects and exhibition designers. They spotted the potential offered by the nature of the spaces, which comprised not just existing galleries, but also offices, stores and other back-of-house areas. An unused open-air space was transformed into an exciting new display area protected by a glass roof, employing innovative engineering technology. A circulation hub has also been created at the heart of the galleries, with a new lift and staircase, providing full access to this wing and across to the central core of the Museum. MUMA have also opened new connections and vistas that enhance the gallery narrative (Figure 1).

The scheme consists of 10 galleries, each with its own narrative and date range, such as Faiths and Empires 300-1250 (The William and Eileen Ruddock Gallery), and A World of Goods 1450-1600 (The Edwin and Susan Davies Gallery). Themed displays set the objects into context alongside individual highlights, selected as masterpieces or simply because they are extraordinarily engaging. One of our aims was to draw out the interconnections across period and geographical divides, as well as between the sacred and the secular, and indeed between art and artefact.

The design brief followed a 'less is more' approach, with a variety of pace and types of display that privileged the objects, while respecting the Grade I listed building - an object in its own right - in which the collections are set. This vision was shared by MUMA, whose sensitive and imaginative design allows the artefacts themselves to articulate the space, keeping architectural intervention to a minimum. One rare exception to this rule is the small room built to house the Scholar's Study display, the size of which was determined by that of Piero de' Medici's study (destroyed in 1659) in the Medici Palace, Florence. The ceiling vault is decorated with the original tin-glazed terracotta roundels from Piero's study by Luca della Robbia depicting the Labours of the Months (Figures 2 and 3), hinting at the original setting of these extraordinary survivals. The display includes a facsimile book and replica medal for visitors to handle. Elsewhere, original objects are available to touch. Carefully chosen in consultation with conservators and the RNIB, the UK charity supporting blind and partially sighted people, these artefacts and their Braille texts have also been tested with visually impaired visitors.

Striking the balance between access and conservation is central to the creation of successful and meaningful displays. It often demands pragmatic decisions. For instance, it is particularly important to dispel the popular notion of the medieval 'dark ages' by creating spaces that feel light. This is no mean feat, given the constraints of combining materials requiring different light levels, notably sensitive objects such as textiles and drawings. To resolve this, some objects were chosen for rotation, others have been placed in drawers and cupboards, and occasionally, lights are activated by motion sensors. Only rarely did we decide to remove items from display or to leave them permanently on view in low light.4 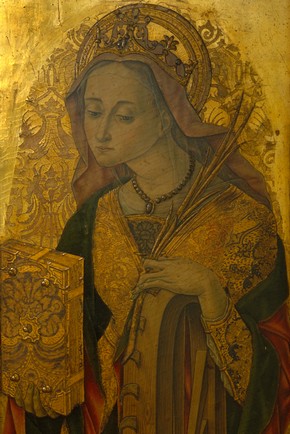 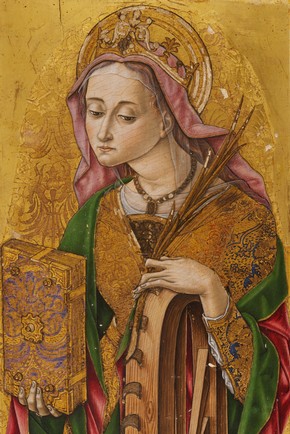 Objects are often displayed to reflect their original setting, such as the liturgical dress mounted as though being worn in a display on Religious Processions, or the tympanum sculpture of the Misericordia (25:11-1882) by Bartolomeo Bon, set high as though above a doorway. Elsewhere, objects are set up for close viewing. In virtually every instance, the display context has informed the level of conservation treatment undertaken on individual objects, as has the desire to be honest about which areas are missing or restored. Cleaning alone has transformed some works (Figures 4 and 5), while in-depth examination and technical study has opened new avenues of enquiry. As ever, research has often raised more questions than it has answered, but this process does not end with the gallery opening, and several collaborative projects are underway.

The focus of the project was to produce exciting displays that would set the objects at centre stage and inspire our audiences. In the process, new approaches to display have been developed in order to meet the varying needs of content, environment, design   and accessibility. All of these must go hand in hand if we are to create successful displays. The repositioning of the Medieval & Renaissance Galleries offered a unique opportunity for this generation to explore the collections afresh. Through their practical work and in-depth research, conservators have made a fundamental contribution, emphasising once again the significance of object-based research and how it can expand our understanding of the artistic production and material culture of the past.

1. The team was led by Malcolm Baker until October 2003
2. See Frost, Stuart. 'Behind the scenes: Conservation and audience engagement', V&A Conservation Journal (Autumn 2009/10) pp.10-12
3. Two Discovery Areas and the Bonita Trust Study Area are also included
4. The light fall was carefully modelled by Arup, who worked on the day-lighting element of the galleries, in conjunction with DHA (responsible for artificial lighting) and MUMA