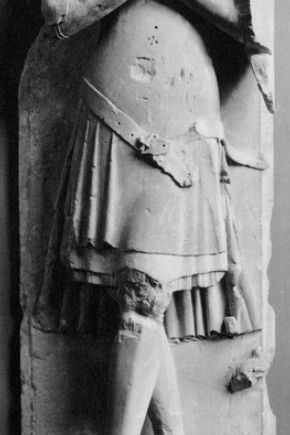 One of the highlights of working on the MA course in sculpture conservation at the V&A has been the opportunity to carry out research and analysis on a beautiful, limestone effigy of a knight called De Lucy (c.1350) (Fig 1). Very few polychrome, stone sculptures of this period survive in such a good state of preservation as the De Lucy effigy, particularly in the case of the raised mail decoration (imitating metal links in the coat of mail). There is therefore little precedent for this kind of analysis. The stone of the sculpture was also analysed and tests were carried out in order to determine its physical properties. Comparisons with other medieval sculpture were made throughout, firstly to set the effigy into an historical context, and secondly to help evaluate the information from polychrome and petrographic analysis.

It is extremely difficult to imagine the once vibrantly painted surface of a medieval sculpture like the De Lucy when faced with the faded remains. Like so many medieval monuments it has suffered hard treatment during its lifetime, including being buried (probably since the Lesnes Abbey fell into ruin - c.1500). However in the case of the polychromy, this has probably been a blessing since the effigy has escaped several centuries of handling, cleaning or heavy restoration.

The pigments, media and layer structure of the De Lucy effigy were analysed at the V&A with Jo Darrah and at the National Gallery with Jenny Pile. The methods mainly used were optical microscopy and some chemical testing. The pigment analysis revealed that nearly all the polychromy is original and the pigment range and painting technique is typical for English sculpture of the period. For example, polychromed fragments of the St Albans Shrine (early 14th century) and also fragments from a 14th century tomb canopy at Ely Cathedral, both analysed recently¹, show similar colour range and painting techniques. Pure bright colours and simple pigment mixtures were used with partial gilding. In the case of the De Lucy Effigy the original effect would have been bold and heraldic. On close examination of the cyclas (or surcoat) traces of three gold pikes with their distinctive dorsal fins could be distinguished. These are believed to be the personal arms of Geoffrey de Lucy (d. 1346) - recorded as 'gules, three luces Or'² (three gold pikes on a red ground). With the three bright gold pikes emblazoned on his red cyclas there would be no mistaking the identity of this effigy. 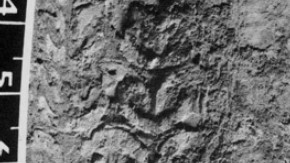 Of particular interest was the raised mail decoration (Fig 2). This occurred in two link sizes, small on the heels and larger on the hauberk (the coat of mail on the main body section). On close examination of this decoration, seamlines could be observed. It seems possible that this decoration was made in precast strips and then applied to the effigy (hence - 'applique'). Studying the cross-sections and reading from contemporary sources such as Cennini³, it appears that in the case of De Lucy the applique decoration (see
Fig 3) was made as follows: First tin leaf was pressed firmly into a mould, followed by a layer of size or wax with calcium carbonate, then red lead paint was added to fill up the mould. When this was dry it was removed from the mould, cut into shapes and applied to the effigy. The size or wax in the mix would add flexibility, while the tin would help to hold the shape of the decoration. No glue or size for the bottom of these strips was detected in the cross-sections and it seems likely that the strips of applique were adhered by laying down onto wet underpaint. 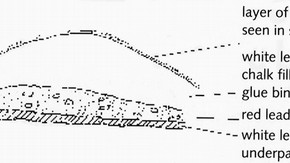 An adhesive was however detected beneath the elaborate raised decorative bands on the armour of another medieval Knight - Sir Bartholomew Bacon, Erwarton, Suffolk (c.1435). This later effigy had its polychromy analysed by Ashok Roy at the National Gallery in 1984. No tin was found in this applique: the ground was surmounted by a fill layer consisting of calcium carbonate, red-brown iron oxide and some silica. The reddish colour of this layer was perhaps intended as a preparation layer for water gilding. Both the De Lucy and the Bacon effigy display complex and painstaking applique techniques to achieve what would have been the stunning effect of contemporary armour. On the one hand the De Lucy with beautifully delineated, silvery (ie, the tin showing) mail and the Bacon effigy highlighted in delicate almost filigree-like, gilded bands.

The medium analysis for the De Lucy was less conclusive. It was noted during sampling that the paint was dry and powdery, the colours appearing quite pale. This indicates that there was very little left of any binding medium. Analysis was done by infra-red microscopy and supplemented by protein tests. None of the samples showed any sign of wax (including the applique decoration). It is most likely that the pigment binding medium used was some sort of oil and the tests seem to suggest this. As regards identifying the composition of the raised mail decoration, the results ruled out wax. In the last set of tests (Jo Darrah) when the carbonate component was treated with dilute HC1 the remaining residue was soft and gummy more suggestive of glue than wax. This would concur with the date of the effigy as the use of wax applique on English effigies does not appear until much later.4

Using mainly the techniques of optical and SEM microscopy, the stone of the De Lucy was identified as a soft chalky limestone, probably Totternhoe from Bedfordshire. 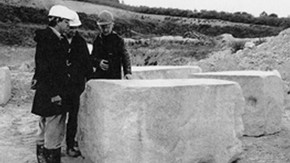 Fig.4. At the Totternhoe quarry (click image for larger version)

A visit was made to the Totternhoe quarry (Fig 4) to examine the stone in situ and to gather samples for testing and comparison with the De Lucy effigy. Thin sections made from a small sample of the De Lucy effigy showed all the typical features of the Totternhoe quarry sample. This type of stone (masons call it 'clunch') is ideally suited to being carved in fine detail which was a noticeable characteristic of the decorative style of the 14th century. This can be seen on the De Lucy in such exquisitively carved details as the rowel spur (Fig 5).

When the effigy was excavated it was taken out of a collapsed vault. While the long burial of this important effigy may have helped to preserve much of the polychromy it probably did little to benefit the condition of the stone. The effigy was found lying face down, this must have put considerable strain on certain areas of the stone. This perhaps explains why a series of cracks have occurred on the effigy's right arm and shoulder. To find out more about the state of the stone a series of tests were carried out at the Rock Mechanics Laboratory of Imperial College under the direction of Rob Marsden. These tests were designed to determine such physical properties as strength, durability, deformation, porosity, permeability, capillarity and linear shrinkage/elongation. As a control the limestone of another medieval sculpture, that of the Bristol Cross King Edward III (c.1400) was also tested and compared. 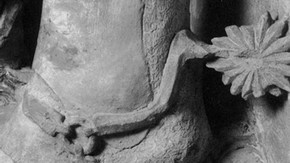 Many of these tests are non-invasive such as the sound velocity test which gives an indication of the stiffness of the stone by measuring the velocity of sound waves travelling through the stone. Much information was gathered on the stones by testing the quarry sample of identical stone type. When it is possible to compare these results against a sample of the original, valuable information on the degree of alteration can be given. There are obvious applications in the field of conservation for having these properties measured for example, such techniques could help in choosing an appropriate stone consolidant.

It is important to set the fmdings of this research in the broader context of sculpture of the same period. Fortunately it has been possible to compare the results obtained for the De Lucy with research on other sculptures. It is felt that a great deal more needs to be done to try and correlate the findings of all the research that has been, and continues to be carried out on early, polychromed stone sculpture. On its own this type of research can seem isolated and over specialised but taken with a larger body of research, the discoveries made regarding the materials, techniques and history of such a fine, medieval sculpture are at once illuminated.