The experimental use of ion beam-based analysis for surface studies in conservation has proved that these techniques have a wide range of applications. Amongst these methods, Secondary Ion Mass Spectroscopy (SIMS) has been applied to a variety of studies that covers several fields in conservation and archaeology 1 . SIMS analysis on metals has contributed to an understanding of corrosion processes and has successfully been used to assist in the development of corrosion inhibitors for conservation.

Also, the nature of this technique makes it ideal for studying the effect of specific elements on alloy composition, their impact on the degradation process and on the previous performance of the objects. SIMS based analysis on stone and ceramics has also shown this technique to be a valuable resource. The elemental mapping of surfaces and composition-depth profiles characteristic of SIMS are used as the basis for identifying chemical-induced contamination on surfaces for example, the understanding of the mechanisms of hydrofluoric acid (HF) cleaning on ceramic materials.

Other fields of conservation, such as glass or wood research, have also found applications for SIMS. Again, the nature of this technique was central to research on the analysis of the degradation and deterioration processes (on medieval glass artefacts, by means of studying the ion exchange process and its effects on the weathering process, and on wood, by analysing its durability and strength). Finally, the identification of dyes, pigments and colorants has been achieved on fabrics and paper surfaces.

SIMS is one of the most sensitive analytical techniques used for materials characterisation, requiring only micro-samples. It is typically used to measure trace-level elemental or molecular contaminants on surfaces, thin films, bulk materials or interfaces. A brief explanation of the fundamentals and characteristics of SIMS is presented. Three operational modes may be used in SIMS: Depth profiling SIMS, Imaging SIMS and Static SIMS 2 .

Depth profiling SIMS is a mode of dynamic SIMS, where a focused ion beam is used to sputter down into the material, with the emission of ionised atoms or molecules as the sputtering proceeds. The sputtered ions are accelerated and separated according to their mass-to-charge ratios in a mass spectrometer. The depth profiling mode provides qualitative (although quantitative analysis is also possible) measurements of the elements of interest as a function of depth in single or multi-layered structures. It is also possible at any point to interrupt the depth profile and produce a mass spectrum to identify all impurities present at that depth.

Imaging SIMS is the second mode of dynamic SIMS and is used to image the lateral distribution of impurities, especially in grain boundaries. The ion beam is scanned over the surface of the material and the secondary ions monitored. Imaging areas are typically a few millimetres at the most. The imaging resolution is limited by the width of the ion beam.

Static SIMS is similar to the previous techniques, but uses a less intense ion beam to sputter the surface. Its suitability for surface studies in conservation should be highlighted since ions are only emitted from the surface monolayer of the sample and a chemical and elemental analysis of the surface is given. The use of this mode is especially orientated to determine the chemical nature of the surface. In addition, chemical mapping makes it possible to localise specific chemical groups or compounds on the sample surface.

SIMS in stone conservation; a case-study 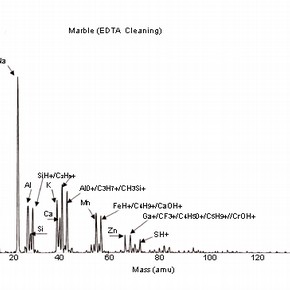 This case study illustrates the potential of SIMS for conservation research in general, and stone conservation in particular. It involves the study of the chemical composition of marble surfaces after the application of chemical treatments. The aim is to increase the understanding of the effects of chemical cleaning on sculpture.

EDTA (0.12 mol.dm-3), hydrofluoric acid (5% sol.) and ammonium Bicarbonate (2.5 mol.dm-3) were used on non-polluted marble samples. These substances are commonly used for chemical cleaning of sculpture. Regarding the use of chelating agents, three values of pH (5, 7.5 and 10) were tested for a contact time of three hours on the sample surface (a deliberately long contact time was used to ensure that alterations were detected during experiments).

Ammonium Bicarbonate and hydrofluoric acid were also tested for a contact time of three hours. The samples' surfaces were tested  on a Millbrook Chemical Microscope (Static SIMS). This provided a chemical study of the topmost surface monolayer, allowing the detection of residual contaminants and relating their presence to the application of cleaning treatments.

Four positive mass spectra, fig. 1a,b,c,d are presented, each corresponding to a cleaning reagent and one untreated marble surface as a reference. These results illustrate the sensitivity of this analysis and therefore, the importance of the interpretation of its results. 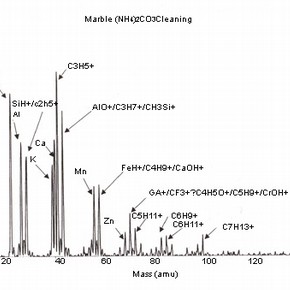 The reference spectrum (non-treated marble surface) gives a representation of the elements and organic fragments that are expected on such surfaces. These not only illustrate the composition of the sample material (e.g. calcium), but also the nature of contamination of surfaces on a residual level (e.g. elements such as aluminium, potassium and organic fragments such as C5H9 +).

The spectra for the samples cleaned with chelating agents (all the spectra for the several pH values tested presented similar behaviour) show the presence of the same peak clusters as before, but with a varying intensity. An increase in the intensity of the sodium peak is noticed, as well as a decrease in the peaks corresponding to the organic fragments.

Although sodium is a common contaminant and its presence in stone is always expected (especially after the application of aqueous treatments), it can also be related to the use of EDTA as a cleaning reagent on stone and subsequent surface contamination. The decrease in intensity of organic fragment peaks illustrates the action of chelating agents, which is likely to reduce the presence of such species (and dissolve calcite as shown in) 3 . 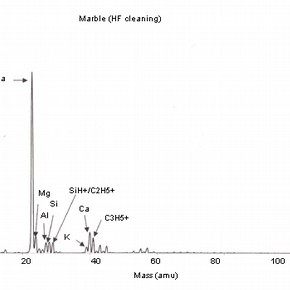 The importance of the methodology used for SIMS analysis should be highlighted as this example illustrates the impact that the choice of elements depicted for study can have on the interpretation of the results obtained. The presence of sodium can be related to the use of chemical reagents, but other sources have to be considered, as sodium can be the result of the adsorption of humidity before or after treatment.
The spectrum resulting from the cleaning with ammonium carbonate shows again the presence of the same peak clusters, with a reduction in the intensity of peaks relating to organic fragments. The detection of a peak corresponding to nitrogen should be highlighted as it is only verified on this sample. The presence of nitrogen as a residual contaminant can therefore be related to the application of such cleaning reagents as part of conservation treatments.

The spectrum associated with the cleaning of hydrofluoric acid reveals a different behaviour from the previous examples. Here, only two peak clusters are found and these can be related to the composition of the marble samples. No organic fragments are present in this spectrum. Considering the solubility of calcite in acidic environments, it can be concluded that the application of HF on the surface can dissolve the superficial layers of this material, with a consequent increase in surface roughness 4 . This can explain the high intensity of the sodium peak as an increase in roughness will increase the adsorption of humidity on the surface. 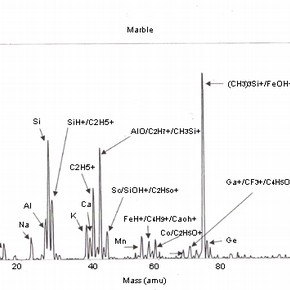 However, the presence of fluorine-based contaminants on the surface as a result of hydrofluoric acid cleaning is practically undetected in the spectrum. Reference 5 shows that fluorine is expected on surfaces after chemical cleaning and that the use of HF leads to a penetration of this element into a porous structure. This spectrum does not necessarily contradict these results since the mode used for analysis (static SIMS) identifies the chemical composition on the outmost surface monolayer.

As discussed, the use of this treatment is likely to increase surface roughness and porosity. The reagents used for cleaning will be likely to penetrate the porous body and residual contamination may well be found beyond the first monolayer. This information should be supported with a depth profiling analysis (dynamic SIMS) in order to monitor the extent of the penetration of the surface contaminants.

SIMS in conservation; an overview

The elemental and chemical analysis, either on the surface monolayer or in a depth profile by SIMS, can provide unique information at trace-level sensitivity. SIMS, either in its static or dynamic mode (or both), has been shown to offer a wide range of applications; this case-study illustrates its suitability for conservation studies. It also demonstrates the high resolution and sensitivity of this technique, which clearly makes it a valuable tool for conservation surface studies, and the potential it presents for research in this field.

1. References for the studies described are available by contacting Pedro Gaspar at p.gaspar@vam.ac.uk

4. Robinson, M. “Changes in the topography and composition of stone as a consequence of chemical cleaning”, 4th year research project, Materials Department, Imperial College of Science, Technology and Medicine (not published).