Overview of the gilded objects treated for the British Galleries

During the British Galleries project we have worked on over fifty objects, treating materials such as gilded wood, composition, leather, metal, japanned surfaces, silvered wood and mirror backs. The treatments have ranged from light surface cleaning and minor consolidation to structural intervention, repairs, and replacement of losses.

Initially, thorough treatment proposals were drawn up for each object; however, sometimes this 'ideal' treatment proposal could not be carried out. This was due to time limitations, and also to the pressures placed on the conservator by the large complex nature of the project, such as the need to work to photography deadlines and installation schedules. The first priority for conservation was the object’s long term stability. Once this had been ensured, it was decided what could be done in the available time. The following case studies illustrate some of the varying approaches to treatment. 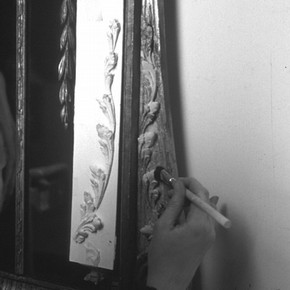 The frame retained much of its original water gilding on pink bole on a very thin white ground, although the gilding was flaking and friable with many small losses. There were also many areas with poor or failing old repairs, including bronze paint and use of red filler or composition to replace missing elements. The first priority was the protection of the fragile original surface and this governed the treatment undertaken. The frame was dusted and consolidated, bronze paint was removed and the gilded surface cleaned. Existing repairs were improved if this was possible, or removed if not. The most obvious losses were filled.

In one area, the lost carving was modelled up with a paste of 2/3 whiting (calcium carbonate) with 1/3 yellow ochre pigment (iron oxide) with micro-balloons (50:50) and rabbit-skin glue (1:10). Once set, this wood–substitute material was light and easy to carve with minimum pressure. This protected the adjacent and fragile woodworm-affected material from further damage. Before gilding and toning the new fills and replacement carving, the surrounding areas were isolated for protection with a layer of Paraloid B72. This was removed with IMS at the end of treatment.

The dragons had been over-painted with bronze paint, under which two periods of gilding were present: the scheme immediately below the bronze paint (scheme no.2) consisted of areas of flaking and cupping oil gilding on a white ground; and areas of burnished water gilding on grey bole on a white ground. Below this there was water gilding on a dark red bole on cut gesso which is the earliest and probably original scheme (scheme no.1). There were losses to both the gilded finish and carved wood as well as many previous structural breaks and crude repairs. 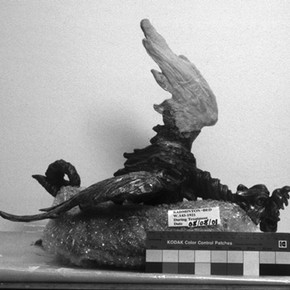 After removal of the bronze paint, the first issue was to decide which gilding scheme to retain. The water gilding of scheme no.2 was in sound condition and was left. However the oil gilding of scheme no.2, was not in a sound condition with much de-lamination. In order to reveal the crispness of the original water gilded cut gesso below, it was decided to remove this later oil gilding. A protective coating of Paraloid B72 was applied to the original surface. Then small losses showing white were coloured out with watercolours and mica powder.

When considering losses to the object, only the most obvious carved loss, a missing wing from one of the dragons at the front of the bed, was replaced, due to limited time. A cast was taken from the wing of another dragon. The mould was made with flexible silicone rubber with a plaster jacket to reinforce it. Papier-mâché (made with Japanese paper and wheat starch paste) was used for the cast (figure 2). The new wing was water gilded and toned to match the surrounding area.

‘The Stork Table’ (similar to a table by Morant’s, London, illustrated in the Great Exhibition catalogue of 1851).

The surface of the object was very dirty, with some areas having many layers of de-laminating over-paint. Many elements were lost, or broken, with some elements having poor repairs. Seventeen broken rushes had been restored to incorrect locations using nails and liberal amounts of putty and bronze over-paint. Two of the storks’ beaks had been poorly repaired. 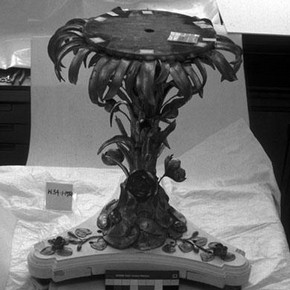 The surface was consolidated, cleaned, and bronze paint removed where possible. The de-laminating over-paint layers were removed to reinstate the undercut detail around the foliage composition ornament. The most obvious lost composition ornament was replaced using moulds cast from original details. The replacements, made of composition, were oil gilded and toned to match the surrounding surface.

The putty repairs were removed from the leather rushes. The rushes were transferred to their original locations using entomological pins as fine dowels (figure 3). The pins were inserted into the hardened leather and fixed with Paraloid B72 adhesive. To avoid damaging any exposed leather a non-aqueous gesso substitute (Aquazol 500 in ethanol + whiting + kaolin + barium sulphate) was used to fill any losses. Due to its nonaqueous properties it was also used to replace water gilded losses on the storks’ metal legs.

The poor repairs on the birds’ beaks were removed and the beaks re-fixed using polyvinyl acetate and acrylic (Perspex) dowels. Barium sulphate, an x-ray dense material, was added to all white-ground fills, to make these repairs obvious to conservators in the future. All fills were smoothed, gilded and toned to match the original surface.

As the case studies above illustrate, treatment of objects has varied. Both traditional and non-traditional methods have been employed during treatment. Time pressures have caused treatments to be streamlined, with nonessential work minimised or cut out of treatment programmes. In short, the combination of external pressures and the unique nature of each object, has resulted in a tailor-made solution being found for every object.