Too big for his boots - Relocation of the Wellington Monument model 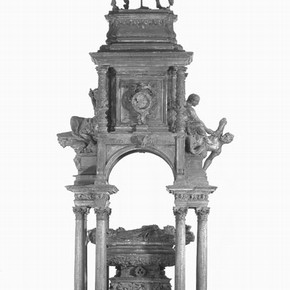 The British Galleries project has provided us all with an interesting range of objects, some with complex problems and/or construction. In the Sculpture Conservation studio the list of objects we have treated ranges through a disintegrating marble fireplace, a vase of flowers made from numerous materials including shell and velvet, to lacquer combs and a life-size portrait of a well-fed Newfoundland dog. About a third of the objects we have treated have required particular care in handling on account of their large size or heavy weight. One of the most extreme examples of this was the model for the monument to the first Duke of Wellington, by Alfred Stevens, which measures 310x118x84cm. This article describes the model and some issues surrounding its relocation.

The model, made of plaster and wax, was made after the announcement, in 1856, of a competition to design a national memorial to the Duke, who had died in 1852. Of the fifty-three quarter-size entries (the final size was not to exceed 13 feet by 9), nine were awarded prizes. Despite not winning first prize, Stevens’s model was eventually chosen for the Monument in St Paul’s Cathedral. The model remained in Stevens’s possession until his death in 1875, after which the Office of Works passed it over to the South Kensington Museum (the forerunner of the Victoria and Albert) in 1878. It has been displayed on the ground floor since that time. None of the other competition models survive.

The model is rather architectural, made up in three stages. The first stage bears a sarcophagus and corpse, with twelve columns supporting an entablature rising to an arch. The second stage has figures seated at either end, and four further columns rising to a plain entablature which bears a pedestal with an equestrian statue of the Duke. The whole impression is of a rather spindly structure, weighted down by the massive plinth on which it sat.

No records remain of how the model was constructed, although it is clear it has been built up in separate parts. Repeat elements, such as the columns and the entablature, had been cast and then stuck together with plaster. The components were built up with spots of plaster as adhesive at each stage, although some joints were more heavily filled. At the time of the move, some joints were beginning to open up, while running cracks could also be seen in a few of the elements. The whole structure was therefore fragile and liable to separation on moving. The mass of the central level meant the centre of gravity was raised, and although the columns supporting it were numerous, they were likely to be vulnerable to stress, resulting in crack formation and propagation. In order to identify the existence and position of armatures, x-radiography was carried out at selected points. Since the issue was the safe movement of the object based on a good understanding of its construction, the model could not be taken to the x-ray machine. The hired mobile x-ray equipment was brought to the model, to be used when the gallery was closed. 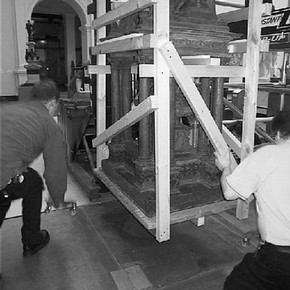 The images revealed only small amounts of armature spanning a few of the joints. Since the height of the model matched the tallest lift exactly, the most obvious route to the new site was effectively barred. Numerous discussions followed, outlining more or less fantastic options for moving the structure through the building and up two levels from the ground floor. The suggestions included crating it and lying it on its side; hoisting it up various short flights of stairs then through an oculus between floors; removing the mullions from the window in the new site and craning the model in from outside the building; separating the model into two more manageable parts, and, as discussions wore on, the increasingly attractive idea (from an increasingly reluctant conservator’s point of view) of not moving it at all.

This interesting exercise in negotiations between a group of people with very different agendas was resolved step by step by arriving at a shortlist. Two suggestions were to be attempted: the separation of the equestrian figure from the rest of the model and the building of scaffold at various points in the Museum to accommodate winching the crated model in its entirety. The primary drawback to the former was that it involved cutting up an otherwise sound object, with the secondary worry that doing it successfully once would run the risk of increasing requests to cut up awkward objects in the future. The drawbacks to the second option were the time the move would take, particularly in galleries that remain open to the public, the cost of building the numerous scaffolds and the potential for unchecked damage to occur to the crated object during moving.

In the event, after a pilot investigation, it was clear that the first option could be carried out. The equestrian statue’s pedestal had a fairly thick joint below, which allowed cutting away with a scalpel blade without affecting the component parts. Concern about the depth of the joint, and whether the two surfaces to be separated would be flat was unfounded, since it emerged that the components were both hollow and the plaster joint was extremely soft. The top stage was thus easily separated, and then lowered down to be carried on its own. The shortened model could now travel in the lift. Bracing it with foam padded battens in an open-sided crate meant that any detrimental effects of movement would be visible, and thus could be immediately attended to. The smooth transfer of the braced model onto a pallet truck using Teflon slips, effective support and a clear route through the Museum meant that there was no sway in the model, and it arrived safely at its destination.

Thus, the problem of height was solved in what was apparently the most convenient way, achieving agreement by all parties concerned. However, the decision to cut the object was not taken lightly, and was taken only after other possible avenues were looked at. The movement of the model took place towards the end of a long and complex project involving a major proportion of the Museum’s gallery space. A new checklist, similar the one we developed for ethics, should be designed to be used from the initial stages of any gallery project. It would lead all parties concerned to consider possible outcomes before any final choice of object is arrived at. In this way, we should be able to avoid the objects themselves being held to ransom.