The cleaning of two paintings by Turner

When cleaning a painting by Turner one is armed with the knowledge that, compared with his contemporaries, the artist had a radical approach to representing nature and experimented widely with materials to achieve spectacular effects. Turner is known to have mixed oil/wax formulations with oil/resin combinations, known as 'megilps', to produce paint with the desired handling characteristics and final appearance. The treatment of two paintings is discussed in this article: technical analysis carried out on both has identified the presence of both wax and resin as mixtures with oil, but these only appear locally. These were presumably in areas where Turner required a certain texture and transparency to describe a natural phenomenon. The implication of this for the conservator is that the solubility of the paint layers may be quite close to that of the discoloured varnish to be removed, and that no single part of the painting behaves under solvents quite like any other. Indeed as it turned out with these two paintings one might argue that no painting by Turner behaves quite like any other. 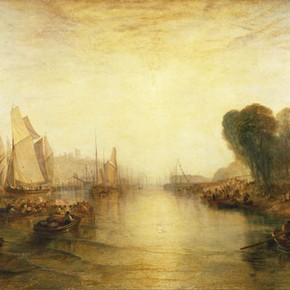 Although quite close in date the two paintings are visually very different. Lifeboat and Manby Apparatus Going off to a Stranded Vessel making Signal (blue light) of Distress (‘Manby’) (SA.211) is a study of sea and sky in storm conditions, with the depiction of the deploying of the Manby Apparatus in the rescue of a ship in distress. The painting uses complex layering of paint to produce the sense of tumult in water and air. Areas on the left of the painting exhibited such a complicated arrangement of different glazes and scumbles that through the varnish it was difficult to understand quite what visual effect Turner was hoping to achieve. ‘East Cowes Castle ’, (SA.210) by contrast, depicted a much calmer scene of a regatta setting sail from Cowes into the Solent on a clear summer morning. The use of paint appeared to be much more understandable than ‘Manby’ with glazes creating limpid watery effects and more solid impasto employed on the shore and crowd scenes. Initially it was assumed that the more visually complex ‘Manby’ would present a greater challenge in cleaning.

Structurally both paintings had suffered from some aspect of Turner’s technique. Large areas of ‘Manby’ showed that widespread, small scale loss had occurred from a surface layer, and for years it had been assumed that the painting was too delicate to travel. Turner often returned to his paintings after a significant period of time during which the paint had dried. Fresh oil does not bind well to a dry substrate, and it is for this reason that many of Turner’s paintings exhibit a flaking problem. Ruskin reported that Sheepshank’s maid swept up paint fragments from beneath ‘East Cowes Castle’ each morning, and the appearance of many large fills in the painting after cleaning would indicate that there was some truth to this anecdote.

The surface of the ‘Manby’ was checked to make sure that there had been no recurrence of the flaking problem and then surface cleaned with water. Small tests revealed that though the paint layer in many areas could be solvent sensitive, the layers of varnish could be removed safely by careful choice of solvent mixtures. The solvents used distinguished easily between two varnish layers and finally could be used to remove the second and more discoloured layer. This was done by employing a painstaking swab rolling technique that protected the delicate paint layers beneath. The cleaning has given a clarity to details within the painting and restored the balance of colours in the subtle cloud and sea effects.

‘East Cowes Castle’ proved to be more difficult from the start. More consolidation had to be carried out to secure some small flakes before the cleaning was attempted. The varnish layers themselves were extremely discoloured and complex in character. Solvents could not distinguish between the layers easily, and analysis of cross sections carried out by Joyce Townsend, from the Tate Gallery Conservation Department, suggested that at least one of the varnish layers may contain oil. It was assumed that the solubility of the discoloured varnishes was too close to that of the delicate glazes in the paint layer for the varnishes to be removed safely. For this reason it was decided to remove all but the final varnish layer, and to thin this layer as evenly as possible. While this treatment could not be as complete as that carried out on ‘Manby’, it did give a result that revealed much of Turner’s original intention while protecting the delicate paint layers during cleaning.

View other paintings by Joseph Mallord William Turner in the National Gallery website.