My experience at the Victoria and Albert Museum began as I was shown the project for the new Paintings Galleries in mid January 2003. Coming from Australia it was not easy adapting to the climate, the new environment and to an enormous and unfamiliar museum. I was lucky enough to work alongside a professional team of conservators on this project who helped to acquaint me with the new studio.

My work mainly consisted of the conservation of three of the more severely damaged gilded frames. As part of the treatments I wanted to retain as much of the original surface as possible and to choose reversible conservation treatments, which would result in the least alteration of the original material. For these reasons I used a combination of both traditionally prepared materials and non-traditional materials and gilding techniques. Traditional techniques were used for preparing the surface of the gilding and a non-traditional gilding system was used for the application of the gold leaf.

This was a French, neo-classical frame with moulded fluting and acanthus leaf corners. The frame was originally water gilded on red and ochre yellow bole with both a burnished and matte finish. Later the frame was partly re-gilded using oil gilding techniques. Bronze paint was used in the previous, unsatisfactory restoration of the ornament. The frame was dusty and dirty overall and there was widespread cracking of the compo ornament and the corner joints. Abrasion was visible along all sides of the frame and on the edges of the moulding. A few losses to the gesso and compo were found on the surface of the frame. The later, re-gilded areas were flaking which was caused by the deterioration of the oil size.

The conservation treatment began with gentle cleaning of the frame using 5% solution of tri- ammonium citrate which was removed afterwards with saliva. Initial stabilisation of the corners was carried out with undiluted Plextol B500™ -a water dispersion of copolymer of ethyl acrylate, EA, methyl methacrylate, MMA, and ethyl methacrylate, EMA. This was followed by the removal of poor repairs and areas of bronze over-paint from the frame. The next step was the consolidation of cracks and fragile areas using Plextol B500 diluted with a 50:50 solution of de-ionised water and ethanol. Losses of the original gesso surface and compo ornaments were refilled with an appropriate new gesso (calcium carbonate, rabbit skin glue and water) and compo (calcium carbonate, rabbit skin glue, hide glue, rosin, linseed oil, glycerol and water). All the areas of newly applied gesso were painted red using watercolour to match the original colour of the bole.

A mixture of Plextol: B500 and Plextol D360™ (Plextol D360 is a water dispersion of a butyl acrylate, BA and methyl methacrylate, MMA based copolymer), was applied and Superieur (23.5 carat) gold leaf was then used to imitate the surrounding matte, oil gilded surface. The areas to be water gilded and burnished were covered with Plextol B 500 diluted in water to which ethanol had been added (50% v/v and ethanol to water 2.5% v/v). This adhesive layer was re-activated with warm breath which was sufficient to adhere the gold leaf. The surface was then burnished followed by the application of a coat of ormolu to the matte areas (Ormolu is a 10% of shellac dissolved in ethanol in glue prepared from 1 part of rabbit skin glue and 14 parts of deionised water). Watercolour and mica powder were used for toning the new gilding to imitate the surrounding area. Finally, it was necessary to build up the back of the frame with timber (pine) to allow for additional thickness to accommodate the painting. 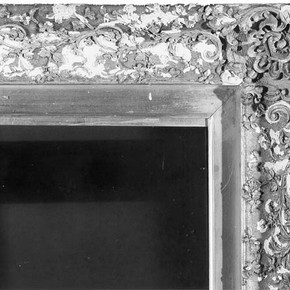 This was a unique 19th century frame with a slip and glazing door. The frame is decorated with arabesque, floral ornaments: and acanthus leaf corners. The compo ornament, which covers the surface, is symmetrical in the middle part of the frame only. The flowers and leaves are individually applied on the edges and the bottom parts of the ogee. The frame was originally water gilded and oil gilded with a matte finish. It was also re-gilded at a later date using oil gilding and improperly restored and painted over with bronze paint. There were many cracks in the compo ornament and at the corner joins. Abrasion was visible along all sides of the edges of the moulding. A number of losses to white gesso, compo and timber were found on the surface of the frame. Much of the ornament and all of the corners were missing. The gold leaf from the later oil gilding was flaking. 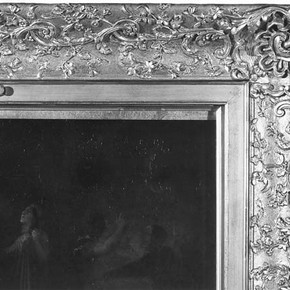 The earlier unsatisfactory repairs and bronze over paint was removed; the surface consolidated, cleaned and losses filled. Plextol B500 was used as a consolidant and 5% tri-ammonium citrate was used for cleaning. Recreation of the corners started with modelling up of one corner using compo – a cast was then taken from this in order to reconstruct the other three details. Very small parts of the missing, cast floral ornament were re-carved in gesso. Other larger parts were cast, and then painted with shellac to imitate the base of the oil gilded, matte finish. Watercolour was used to replicate the base of the gilded finish.

The effect of oil gilding on the frame was achieved by applying gold leaf with a mixture of Plextol B500 and D360. The damaged, water gilded areas on the slip and glazing doors were coated with Plextol B500 diluted in water with additional ethanol (50% v/v and ethanol to water 25% v/v). This was re-activated with warm breath before the application of the gold leaf. The in-gilded surface was then smoothed or burnished where appropriate. A protective layer of ormolu was applied to areas with a matte finish and toning was carried out with watercolour and mica pigments. As with the previous frame, a pine build-up was added to the back of the frame to safely accommodate the painting and backing board. 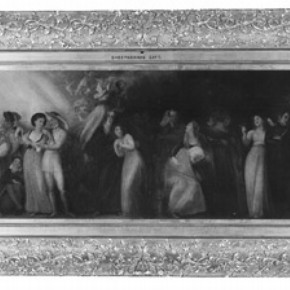 The last project was a large, classical 19th century French frame with a timber moulding and compo ornament. The water gilded, red and blue, bole slip was in the original condition except for the re-gilded corner ornaments. Stabilisation of the corners was not necessary, but the extensive network of cracks needed urgent attention. The frame had originally been water and oil gilded on a thick gesso base. At the time of investigation the frame was in a poor condition. The red bole and the partially burnished ornaments were visible through areas of bronze over-paint. The wood was also cracked, much of the ornament was detached or missing, or had been replaced with unsatisfactory repairs.

The conservation treatment of this slip and frame started with consolidation of the surface using a mixture of Plextol B 500 and water (same proportions as in the previous treatment). It was necessary to fill the losses and replace the missing ornament using gesso and compo followed by the removal of the bronze over-paint. The gaps in the slip were filled with cotton bandages dipped in Plextol B500 to act as a flexible filler.

Gesso applied on the newly replaced areas was smoothed and painted using yellow ochre and red watercolour to match the original bole. A mixture of Plextol B500 and D360 (50% v/v) was applied and Superieur (23.5 ct) gold leaf was then used to imitate the existing oil gilded surface. Areas to be water  gilded and burnished were covered with Plextol B 500 diluted in water and ethanol (50% v/v and ethanol to water 25% v/v).This adhesive layer was re-activated with warm breath which was sufficient to adhere the gold leaf to the surface which was then burnished. The treatment was completed by applying a coat of ormolu to the matte areas which were then toned with watercolour and mica powder.

In all of the conservation treatments I combined traditional methods for preparing the surface for gilding with non-traditional gilding methods.

All in all I thoroughly enjoyed my time at the V&A and feel that my experience was very worthwhile.

2. Thornton, J. The use of nontraditional gilding methods and materials in conservation. in Gilded Wood, Conservation and History, Sound View Press,1991.

Sandra Smith, Head of Conservation: Nicola Costaras, Head Painting Conservator: Sarah East and Zoe Allen, conservators who helped me to finish the last frame. I would also like to thank all my colleagues and friends from the V&A for making my stay so enjoyable.

Any inquires should be addressed to the author: