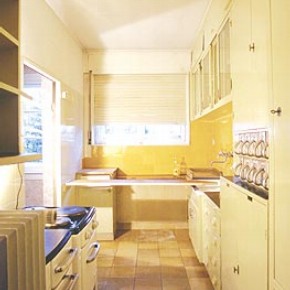 In 2005 the Victoria and Albert Museum acquired a 'Frankfurt' kitchen (W.15-2005), which will be the centrepiece of the exhibition 'Modernism: Designing A New World' (6 April-23 July 2006). It was one of the first fitted kitchens, designed by the Austrian architect Margarete Schütte-Lihotzky in 1926 with the aim of minimizing the housework for a generation of women who had to balance their chores with a job outside the home. Ten thousand units were produced in the following four years and incorporated into housing projects in Frankfurt, Germany designed by the architect Ernst May (Figure 1).

The kitchen cabinets were made of functional and hygienic materials: softwood and plywood units, beech and linoleum work surfaces. The prototype of the kitchen was painted monochrome blue due to the fact that flies don't perceive it as solid and are therefore discouraged from landing on the surface. Later models were painted in a wider range of colours, including grey, green, white and blue, after they were installed.

Schütte-Lihotzky incorporated other methods to discourage pests in the kitchen. She recommended oak wood for the flour drawers to repel mealworms, and utilised raised concrete plinths to avoid dirt-catching and insect-attracting nooks and crannies. She designed a wall cupboard for the refuse bin which opened on the kitchen side for rubbish disposal and on the hall side for rubbish removal. Finally, Schütte-Lihotzky's design for the storage cupboards included holes in the doors, and grids instead of boards to facilitate ventilation and thereby prevent mould growth. 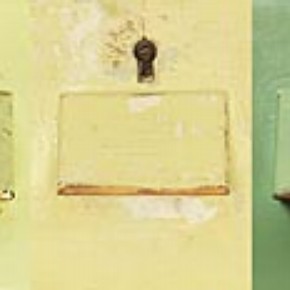 Figure 2. Patina areas around a drawer handle: before conservation, after smoothing and filling, and the finished surface. Photography by Karen Melching (click image for larger version)

Magarete Schütte-Lihotzky's plan separated the kitchen from the rest of the flat in order to isolate cooking noises and smells. She followed the new trend away from the unhygienic 'eat-in' kitchen to a compact household 'laboratory'. These small rooms were intended to create space for cooking, washing, food storage and ironing, even in the tiniest of flats. Schütte-Lihotzky was influenced by the Taylor system, which had been successfully applied in the U.S. in planning for industrial operations. She studied household tasks and timed different movements with a stopwatch in order to find a way to reduce superfluous walking and handling while preparing meals. Her final design was based on the model of a railway dining car kitchen, where two people were able to rapidly prepare meals for up to eighty passengers.

Not surprisingly, for a kitchen in use for nearly eighty years, the painted surfaces were clogged with four layers of over paint. Preparation between coats had been poor and as a result brush strokes and runs disfigured the flat surfaces, whilst the edges, originally sharp and clean, were clogged with paint and rounded over. Microscopic analysis was used to identify the structure of the painted surface and showed the following layers, listed from the surface down: three different over paint layers, a pale green over paint layer, a high-gloss, pale green, linseed-oil-based layer, two undercoat layers, one grey primer and the wood substrate.

The first step in the conservation treatment was to see if it was possible to remove the over paint layers and reveal the original paintwork. A combination of solvent gels and mechanical removal appeared promising but proved too time consuming. With only a period of about six months between acquisition and display, the decision was taken to simulate the original but, wherever possible, to incorporate the evidence of wear so as to allow visitors to understand how the kitchen actually functioned. Worn paint, marks and small areas of damage reflect the long years of domestic use. For example, the paint has been worn down to the bare wood around the much-used grab handles of the cutlery drawer, whereas the doors and flaps of the high, inaccessible storage shelves are in almost pristine condition. 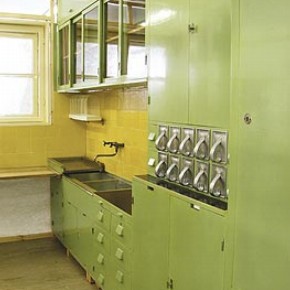 Paint removal tests showed that brush marks, drips and clogged edges were due to the poor application of the outermost white layers. If these were removed or reduced in thickness, the clean lines of the kitchen would be revealed. Several methods were employed to smooth the top layers. Some areas of wear, for example around handles and on the top corners of the doors (Figure 2), were covered by a single layer of white over paint, and this was removed with acetone. A similar treatment was used on surfaces, such as the ironing board, where the contrast between early- and latewood growth produced a distinctive and slightly three-dimensional effect. Large, flat areas were sanded.

Losses that were not representative of use were filled with Fine Surface Polyfilla®. A separating layer of 10% weight to volume ration Paraloid® B 72 in toluene ensured that the new green over paint could be removed in the future without risk to the original paint below. During the process of testing over paint removal, all over paint had been removed from a small door. 'Farrow & Ball' used spectral analysis of this surface to match the original colour and supplied new alkyd-based paint.

This new paint would need distressing in order to incorporate evidence of wear and represent the use of the kitchen. In order that this distressing should be as accurate as possible, areas of distinct wear were photographed before the kitchen was repainted. In addition, larger areas of wear were given an isolating layer of Regalrez 1094® coating and microcrystalline wax. This allowed rapid selective removal of the new green paint, revealing the original wear marks and providing the starting point for the final toning treatment (Figure 2).

Historical photographs of the kitchen show the glossy reflective character of the original paintwork. This type of finish was often described as enamel paint because of its similarity to the gloss and colour of enamelled kitchenware. To reproduce a similar effect, the new green paint was denibbed and lightly abraded before a finish of dammar was applied, which had to be toned afterwards to give the impression of wear and tear (Figure 3).

Rather than reproducing the kitchen 'as new' the aim was to combine the original paints scheme with evidence of how the kitchen was actually used. This gives the added dimension of allowing the viewer to assess the success of Schütte-Lihotzky's multifunctional design.

With thanks to Ms. Debus-Steinberg (Stuttgarter Gesellschaft für Denkmalpflege, Germany) for all her information about the Frankfurt kitchen; V&A Technical Services for the trial build and my colleagues Shayne Rivers and Katja Tovar for their brilliant collaboration and Dr Lucia Burgio for her assistance with the microscopy analysis.