Tiles from the tomb of Buyanquli Khan 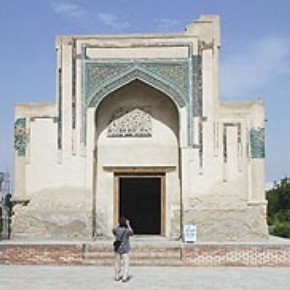 In the rough-and-tumble politics of fourteenth-century Central Asia, Buyanquli Khan was but a minor figure. Placed on the throne of Samarqand (in modern-day Uzbekistan) by the local power broker, he was a pious and devoted puppet until the assassination of his patron led to his own execution in 1358. His body was taken back to Bukhara and buried near the tomb of the revered Muslim saint Sayf al-Din Bakharzi at a complex called Fathabad in the western suburbs. In short order the political tables turned, and a faction of supporters and relatives avenged Buyanquli Khan's death. It must have been they who commissioned the splendid tomb which still stands, albeit in a highly restored state, outside Bukhara (Uzbekistan) today (Figure 1).

In architectural terms, the tomb of Buyanquli Khan is fairly straightforward; the exterior is just a flattened cube with a single dome and a high portal, while the interior consists mainly of two rooms, a large ziyaratkhana or "visiting room" and the tomb chamber proper. Yet this simple structure was sheathed inside and out with some of the finest Islamic tiles ever made. All are made of deeply carved earthenware covered with a coloured glaze. The low-fired body is porous, pale yellow in colour with darker granular inclusions. The glaze colours are restricted to black, white, cobalt and aubergine details on a deep turquoise blue background, creating a powerful unifying effect. They are decorated with motifs ranging from simple stripes to geometric patterns and vegetal scrollwork of great complexity. The most impressive of the tiles are perhaps the inscriptions which once framed the façade; they include Qur'anic quotes and historical inscriptions in majestic 'thulth' script 'floating' atop deeply carved arabesques. 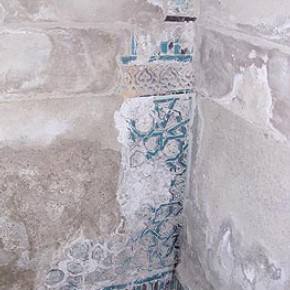 The tomb's tiles were probably made by an independent local workshop. The style of the calligraphy, especially the elongation of the letters 'alif 'and 'lam', is typical of fourteenth-century monuments in Transoxiana, Central Asia. The austere restriction to one technique (deep carving under glazes of a severely restricted colour range), on the other hand, is striking; other tombs of the period, notably those at the Shah-i Zinda funerary complex in Samarqand, display a greater variety of techniques and more polychrome effects.

A great number of tiles from the tomb of Buyanquli Khan are now to be found in collections throughout the world. The V&A has an especially complete collection, much of which has long been on display in Gallery 133. The renovation of the Museum's display of Islamic art from the Middle East has provided an excellent opportunity to focus more attention on Buyanquli Khan, and an entire section of the new Jameel Gallery of Islamic Art is dedicated to a representative collection of tiles chosen to illustrate the quality and variety of the tomb's decoration.

The new display will include part of a decorative column and capital, individual tiles and framed panels of up to eight tiles. Tile dimensions vary greatly (the largest tile is over one square metre) but all are between 40-60mm thick. As the final surface layer attached to the fabric of the building, they had been exposed to the extremes of the Central Asian climate and other forms of deterioration associated with their architectural context, including damage caused by water (Figure 2). 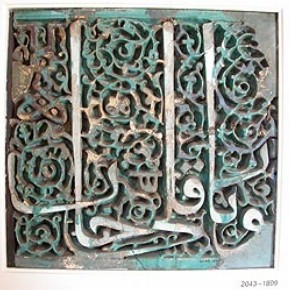 Structural damage ranged from minor chips and cracks to multiple breaks and losses - some likely to have been sustained during and after their removal from the mausoleum walls. The glaze surface was heavily soiled and encrusted in places. Soluble salt damage is visible on some tiles: salts have crystallised resulting in a network of glaze cracks and a weakened, powdery body below a distorted, lifting glaze.

Since their arrival at the V&A in the late nineteenth century, many tiles had been displayed high on gallery walls. Framing materials were cumbersome and, in some cases, they had not provided sufficient support to prevent the tiles from suffering further structural damage. In addition to historic dirt, a thick layer of black 'museum dirt' obscured both the brightly coloured decoration and damage beneath. It was apparent, on removal from the frames, that interventive treatments would be required to ensure stability and improve the appearance of the tiles prior to redisplay.

Past restorations on the damaged tiles were often rather heavy-handed. Repairs to break-lines and missing sections of tile had also deteriorated making many objects unstable and unsightly. Layers of discoloured paint and crudely executed plaster fillings obscured large areas of original decoration including inscriptions (Figure 3). Removal of the over-paint and examination of the reverse of the tiles revealed further the extent to which the old repairs had failed. 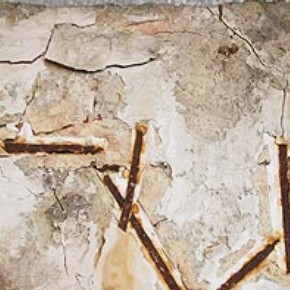 Dowelling had been used extensively as a method of joining broken pieces. Channels had been cut out of the tile backs allowing iron bars to be set in a bed of plaster across the break-lines. The iron dowels had expanded due to corrosion. This resulted in the body being pushed apart causing new damage as well as weakening existing repairs and staining the surrounding area (Figure 4). The removal of the dowels, by mechanical means, was a lengthy, difficult process given the friable nature of the ceramic and extreme hardness of the rust-impregnated plaster. Dowels were only removed if actively weakening the joins.

Reconstruction of the fragmented tiles began with the consolidation of friable areas. Paraloid® B-72 (ethyl methacrylate methyl acrylate copolymer) in acetone was used in different percentage solutions to consolidate and to bond detached pieces. As extra support on some of the heavier tiles, the cut channels were utilised to house carbon fibre rods (3-5mm diameter). The exposed earthenware was sealed with Paraloid®  B-72 in acetone prior to embedding the rods in Multipurpose Polyfilla® (calcium sulphate hemihydrate with cellulose ethers). 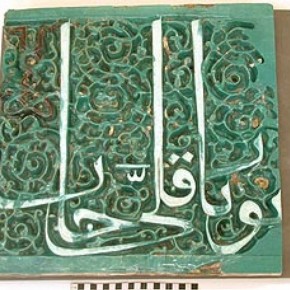 Conservators and curators agreed on options for the reconstruction of missing, or previously restored, tile sections. Incorrectly restored letters were changed. If tiles had large incomplete areas of script, small losses were restored to make the text legible, leaving the remaining missing design unfilled (Figure 5). Previously, large sections of loss had been replaced with blocks of wood or over-filled with plaster and, rather obtrusively, painted in white. These were removed to allow either for a partial reconstruction of the pattern (if known) or a reduction in the level of the plaster, which was then painted in the background colour.1 This approach enabled the script to be easier to read and the losses more discreet. As part of a group display, consideration was given to the appearance of the tiles in relation to each other: this required a consistent level of finish to all restorations.

Preparation for display included backing tiles on lightweight Hexlite® 620 boards, employing a method used in the Museum since the 1990s.2 The larger tiles and panels are framed. The tiles are on open display and, as such, will be subjected to particulate pollutants in the air, which in turn attract moisture. In planning future care, the extent of the old and new restorations and evidence of soluble salts are important considerations. Preventive measures will need to include monitoring their condition, maintaining a stable relative humidity and keeping dust levels to a minimum.

The success of the Buyanquli Khan tile project relied on planning suitable treatments that would be achievable in time for the gallery installation. Inevitably, this did lead to compromises on some objects. In order to effect good results, conservators worked closely as a team and, in turn, gained valuable experience in the treatment of architectural ceramics.