Open Wed - Mon
Menu
Close
V&A Dundee
V&A Dundee
In April 2019, the much-admired Star Wars costume in our galleries returns home to the Lucas Museum of Narrative Art in San Francisco. Curator Meredith More introduces the dress replacing it and explores how they and their designers are connected.

Worn by actress Natalie Portman in Star Wars: Attack of the Clones, the costume by Scottish designer Trisha Biggar has been a real highlight of our Scottish Design Galleries since we opened.

Biggar’s eclectic approach to costume design means that she gathers inspiration for silhouettes, patterns and materials from a myriad range of sources. In this costume she blends together the shape of Russian folk costumes with a pattern inspired by Scottish Paisley motifs, creating a unique yet recognisable form of dress for the character of Padmé Amidala.

While we are very sad to see the costume go, it’s exciting to be able to bring a new object into the galleries in its place. And the idea for the perfect replacement was in fact borne out of a casual conversation with Trisha Biggar herself.

A few years ago, when I first contacted Biggar to ask whether she would be like to be represented in the Scottish Design Galleries, we had a chat about her early career and influences. She mentioned very fondly the 12 years she spent working as wardrobe mistress at the Citizens Theatre in Glasgow, between 1978 and 1989. While there, she worked closely with director and designer Philip Prowse, who became something of a mentor to her.

Prowse and his fellow directors Giles Havergal and Robert David MacDonald ran the Citizens, affectionately known as the ‘Citz’, from 1971 until 2003. Located in the deprived area of the Gorbals, in the 1970s the theatre sold tickets for only 50p to ensure there were no barriers to its content for local residents. Prices have stayed low ever since.

The directors were international in their perspective, choosing plays that were timeless rather than familiar. Thanks largely to the vision of Prowse, the Citizens Theatre's approach to design was innovative and daring, particularly in the ‘70s and ‘80s. The theatre achieved hugely ambitious sets and costumes on tiny budgets, creating stylised and all-consuming experiences that attracted eager audiences.

As wardrobe mistress, Biggar’s role was to work closely with the director and designer to help realise the creative concept for each production in practical terms. She said that Prowse would rarely sketch his ideas; if he did, they were very informal drawings on scrap paper, so she had to be able to convey his descriptions of shapes, cuts, colours and materials to the cutters, who would then make the costumes. This required considerable skill, as well as Prowse’s trust.

To get the full picture I spoke to Prowse himself, who confirmed that the creative rapport between them was essential to the costume department’s success. Prowse recalled that Biggar would often interpret what he said in a way he didn’t expect, but that usually he’d have to admit that she’d only made things better, such was her eye and her flair.

The Citizens Theatre worked to small budgets, so Biggar was also responsible for ensuring they didn’t overspend on materials. She and Prowse had to be very inventive to make a little go a long way, often using fabrics like silk which were cheap to buy but still conveyed luxury on stage. They would often buy un-bleached calico and then paint it; a smart solution considering the costumes never had to last very long.

After her stint at the Citizens Theatre, Biggar went on to study costume design at Wimbledon College of Arts and later became a costume designer in her own right. She moved away from theatre and into the world of film and television, where she is best known for her work on the Star Wars prequel films.

Although designing costume for film and television is quite different to designing it for theatre (for example, minute details are important on screen while high impact is more important on stage), Biggar maintains that it was at the Citizens Theatre where she first learned how to reimagine and reinterpret historical dress.

What inspired Biggar most about Prowse’s approach was the way he could take on any historical period and capture its essence, but never in a literal way. He would always focus on achieving the perfect silhouette for the costume first and the details would come later. Prowse told me he thought period costumes that strive to be historically accurate are often “hideous and clumsy”. He preferred to find distinct ways of reinterpreting the past for modern audiences. This ethos clearly resonates with Biggar too, whose own work employs a stylised interpretation of historical or cultural references. 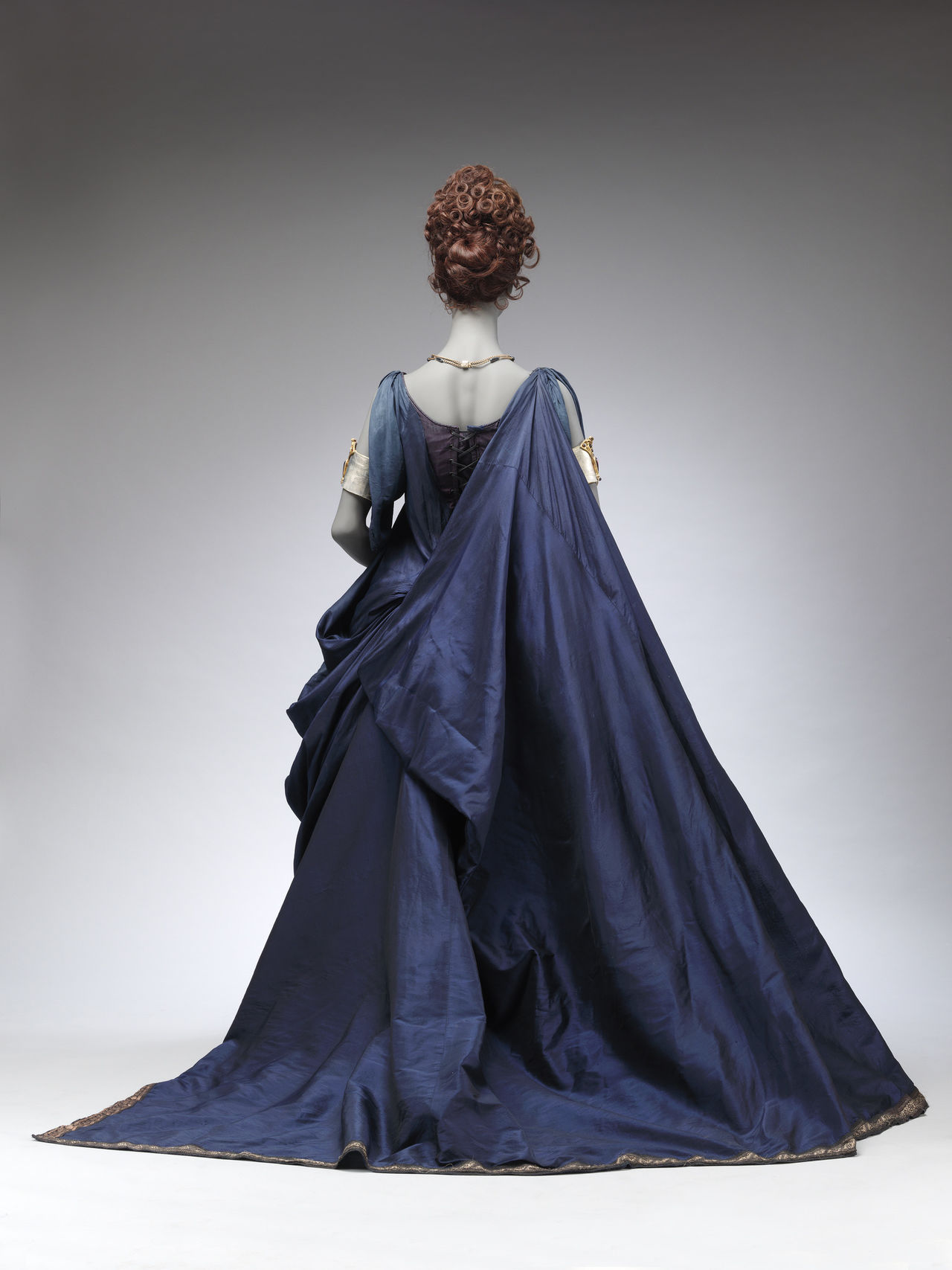 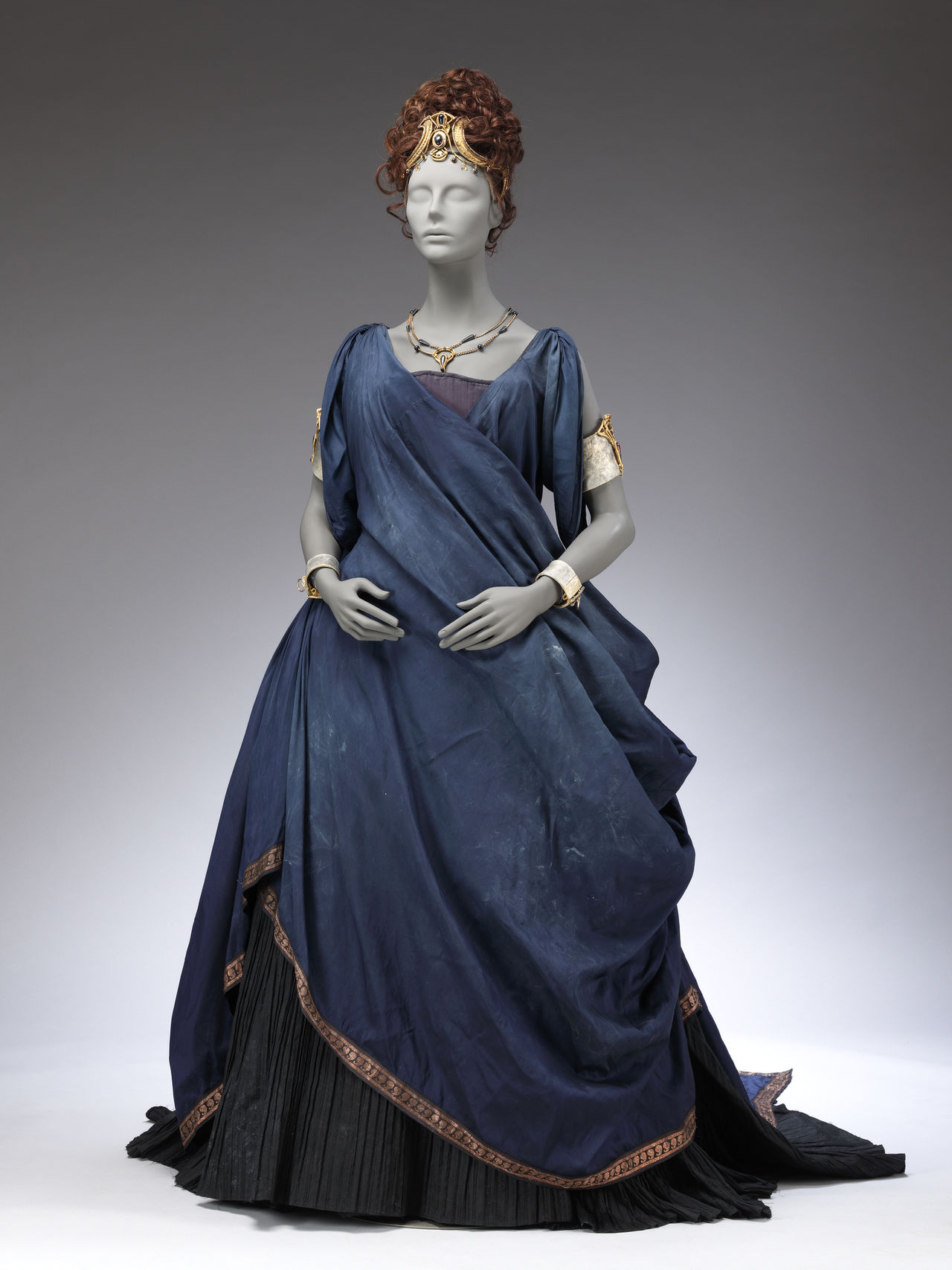 Replacing Biggar’s Star Wars dress, the costume by Prowse joining our Scottish Design Galleries is an extravagant blue gown worn by actress Glenda Jackson when she played the lead role in Phedra at the Old Vic in London in 1984. The play depicts the story of Phedra’s forbidden love for her step-son Hippolytus and was full of drama, as the voluminous skirts of the costume suggest.

Although this wasn’t a Citizens Theatre production, this version of the play was translated by Prowse’s regular collaborator and fellow Citz director Robert David MacDonald, hence why it had its own unique spelling of Phedra (rather than the more common Phaedra).

Prowse’s design was based on a highly stylised version of 17th century French style. The stage was dominated by swaged curtains of tarnished gold, a gilt throne, funeral urns and horse’s heads, and the baroque details and classical drapes of the costumes show that much of his inspiration came from allegorical paintings of the period. This particular costume has full, luxurious drapes of steel blue fabric decorated with brocade, and an elaborate gold headdress.

Biggar also admired the way Prowse wouldn’t dilute his design concept or vision in favour of practicality. He didn’t shy away from voluminous skirts and long trains, believing actors should be able to adapt on stage to the modes of dress of the period. This instantly made me think of some of the extravagant, almost architectural costumes Biggar herself designed for Star Wars, and especially the costumes for Padmé Amidala, which must have been a real challenge to move around in! Find out more about the character's elaborate costumes and how Biggar worked with George Lucas to soften her look for the sequel in the video below.

Prowse was clearly an important role-model for Biggar, but he too speaks highly of her talent and expertise, saying working with her at the Citizens Theatre was "absolutely marvellous". Although Prowse is no longer working, they do periodically still catch up, and I’m very grateful to them both for sparing the time to chat to me about their memories of this immensely creative period at one of Scotland’s most innovative theatres.

Biggar is currently working on the costume design for the upcoming fifth series of hit US TV show Outlander, produced at Wardpark Studios in Cumbernauld. I look forward to seeing her take on Scottish historical dress on our screens very soon.

Meredith is a Curator at V&A Dundee.