Having been a skater since the age of ten, I have explored various towns, cities and urban spaces in search of spots to skate with my friends. As a skateboarder, you look at the world differently from others: benches that are designed for static sitting become obstacles to slide and grind across; sets of stairs are designed to help you ease your way down a drop but skateboarders fly down them instead.

We’re constantly reappropriating the function of urban spaces and bringing new life to those that might otherwise get overlooked. I am drawn to cities like Copenhagen, where public space is utilised in exciting and creative ways. Skateboarding is often incorporated into many of these spaces and I wanted to look at how the same could be done here in Dundee. And so my project 'V//ALLIE' was born.

The primary goal was to turn the museum’s exterior space into a hub for skaters. For them to congregate and socialise in and bring extra life to the site. I hoped to find a way for the space to be used by different groups of skaters in Dundee and beyond, of all skill levels, backgrounds and identities. I wanted the space to feel like a vibrant and exciting place to hang out as well as skate.

Interested in both spatial and furniture design, I consider myself a designer-maker. Creating interventions and furniture that were skateboard-friendly seemed like the most obvious way to show how skateboarders can use public spaces differently to the average pedestrian. I was also interested in how this could make the space more usable for non-skaters. For this project I designed a series of modular benches and shelters that were enjoyable to use by skateboarder and pedestrian alike.

My first step was to use some of the tools we learned about on the Interior and Environmental Design (IED) course. Such as ‘bodystorming’ to analyse how people moved through the space, how long they spent and what they did there. I found the space tended to function more as a passing place than somewhere to congregate, so this was something I was keen to tackle. I spent a lot of time analysing site drawings, tracing over them and creating spatial diagrams to better understand how my interventions and furniture could work with the site without getting in everybody’s way.

The modularity of the bench design and the way they are arranged (some sitting in pairs and others in threes or fours) really got me thinking. How I can add my own modules to their layout? This is where my initial interventions came into play: inserting a ramp onto the edge to give it a new temporary and moveable module. 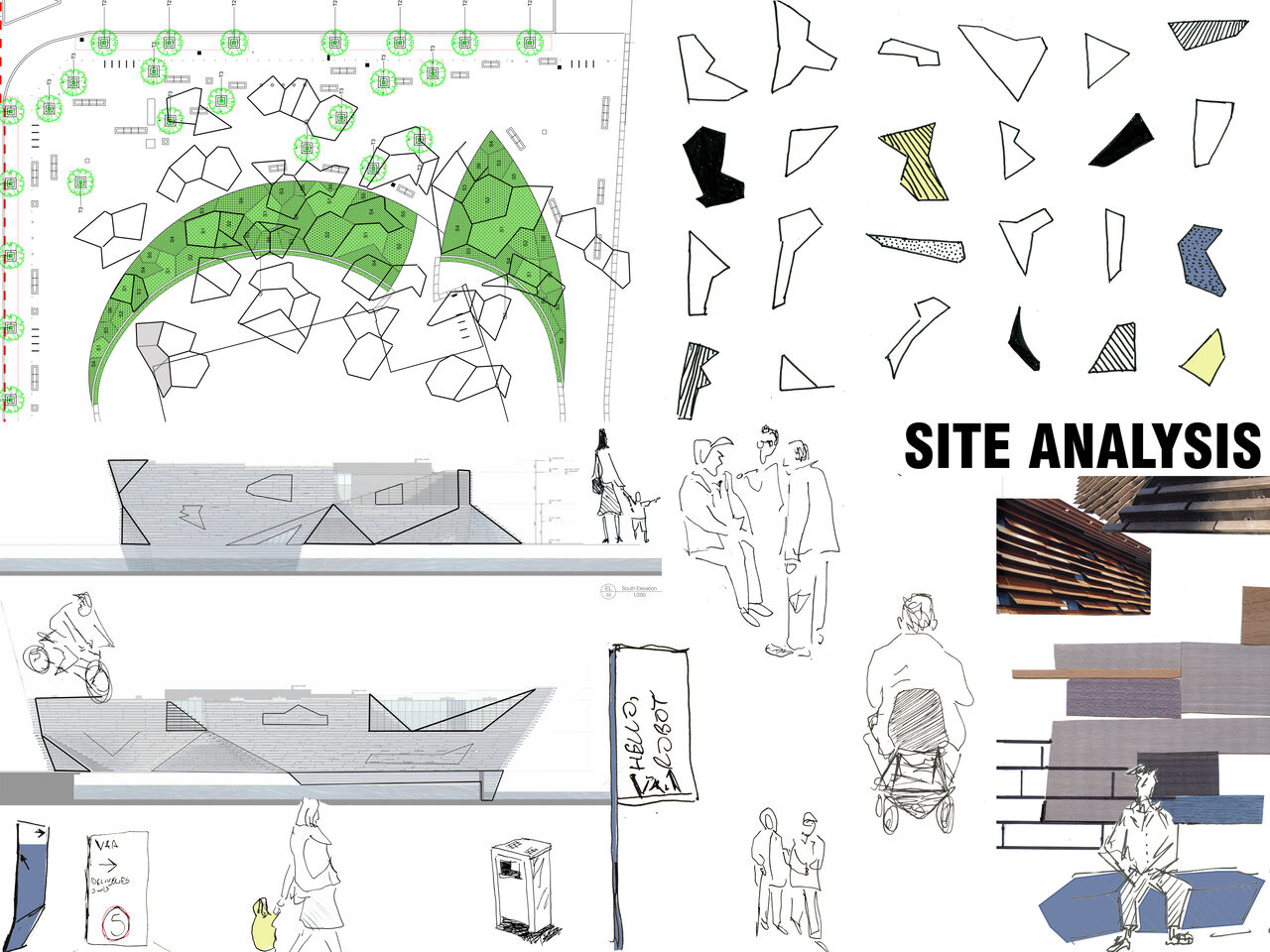 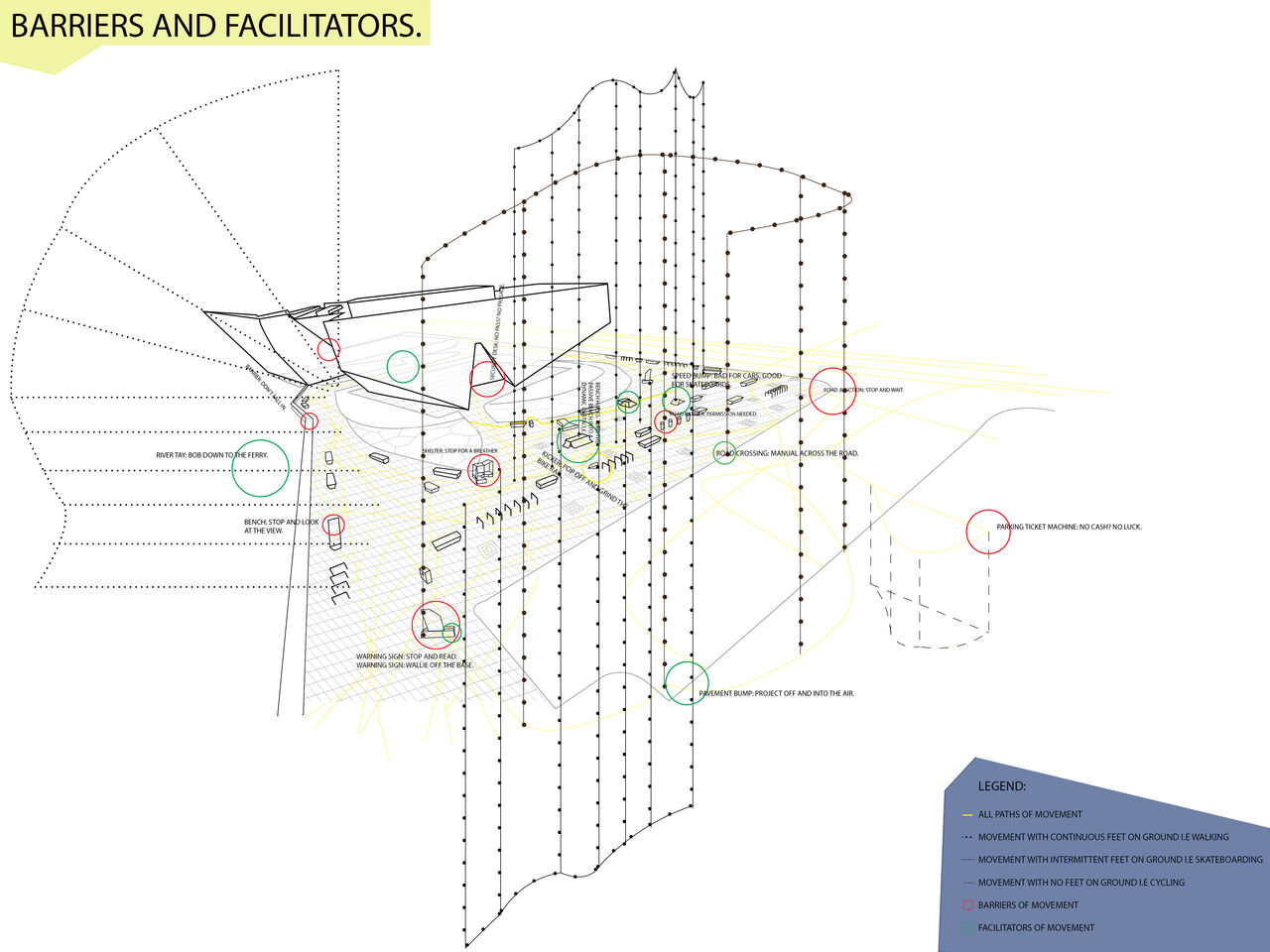 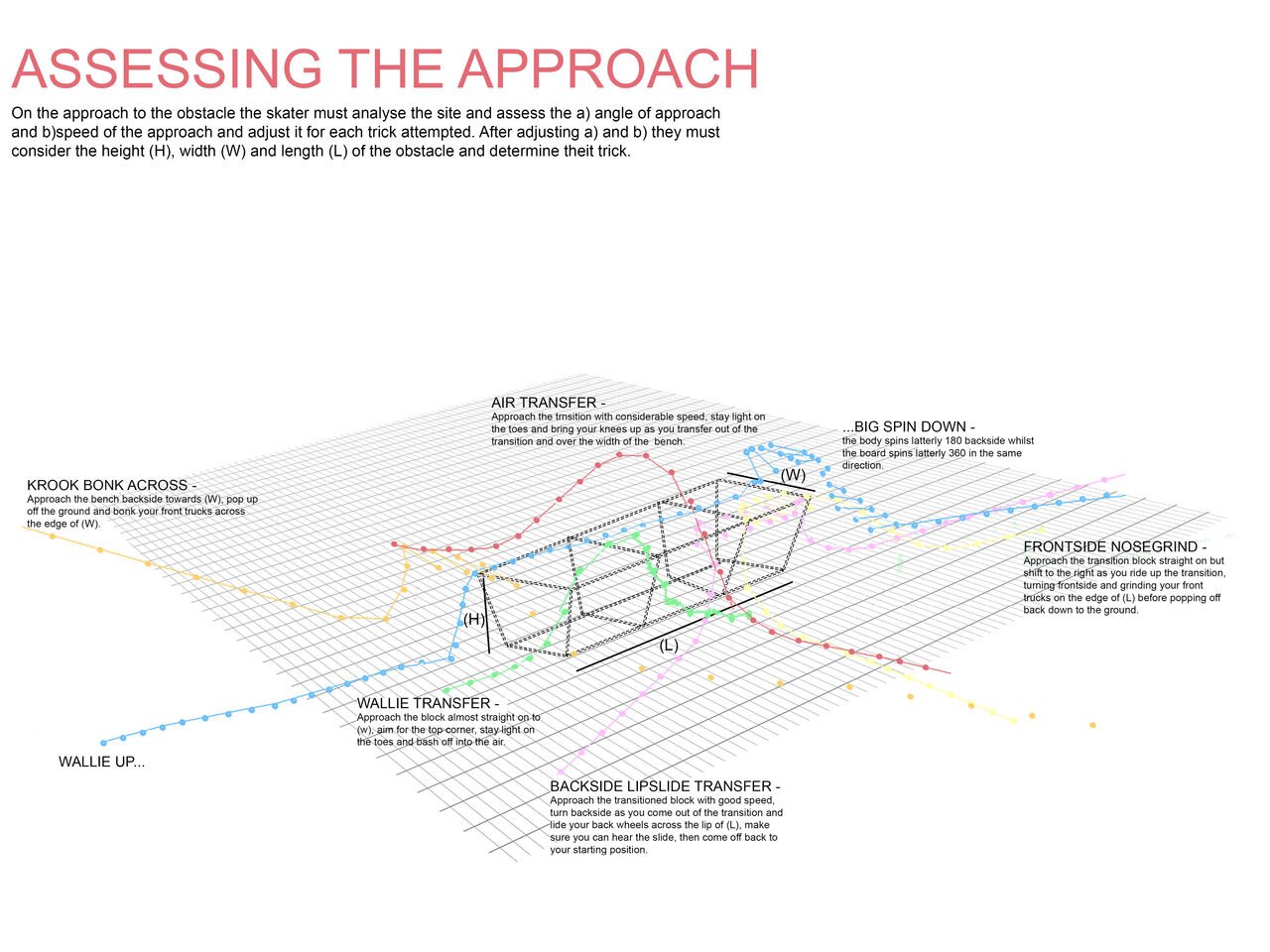 The modularity and repetition of the benches across the site is really attractive to skaters. It gets us thinking about how we can use the benches to link together our movement throughout the space. Instead of moving in a straight line through the site, like the average pedestrian or cyclist, skaters take a different route each time as we meander and flow through the site in a more dynamic way. How can we link tricks together in a sequence on different benches and in one path of movement? And then adjust this path to hit different benches the next time, and so on?

To play with the existing space, I first designed two blocks that inserted into the angular shape of the benches. Though appealing to skaters, they’re quite tall and can be hard to get up and onto on a skateboard. I began experimenting with how I could assist skaters. 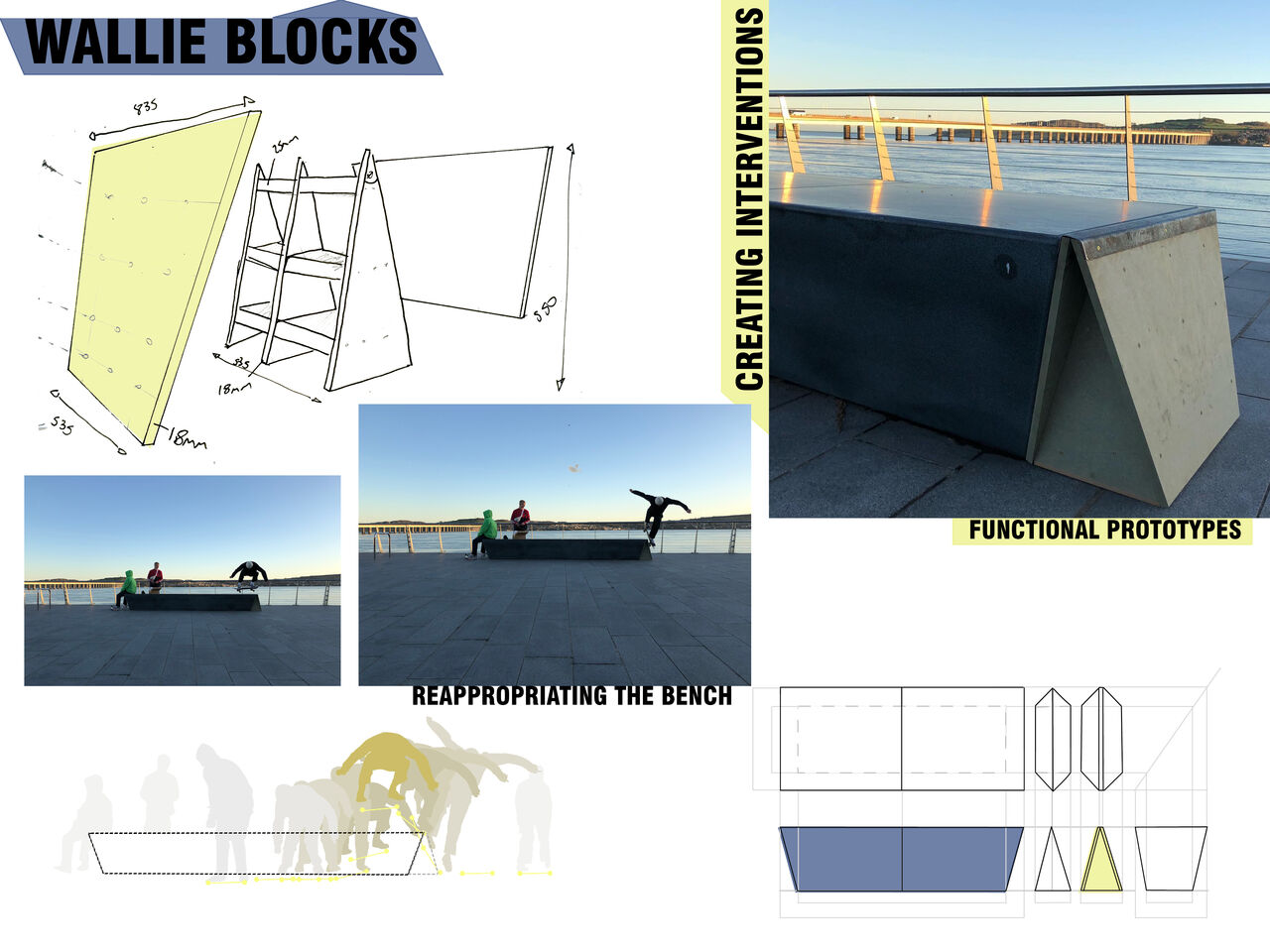 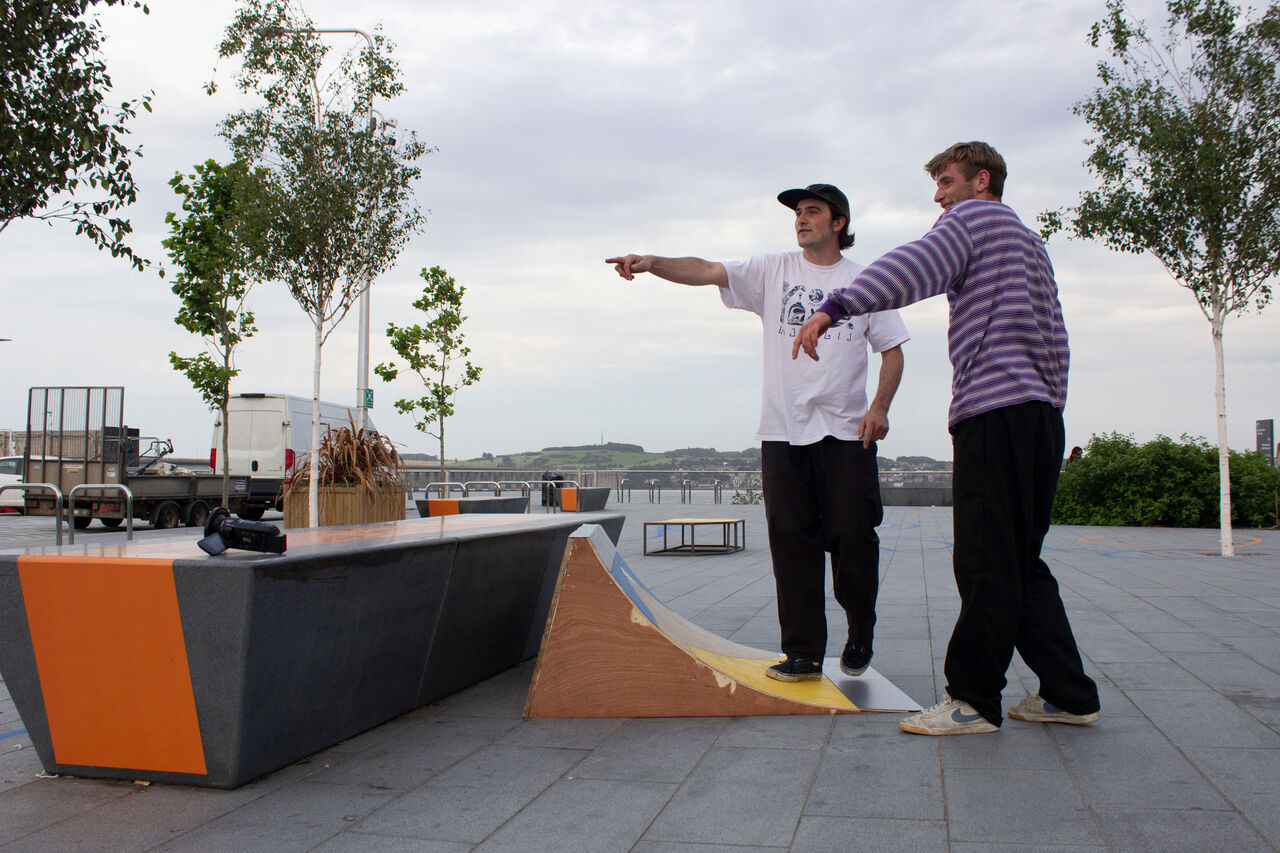 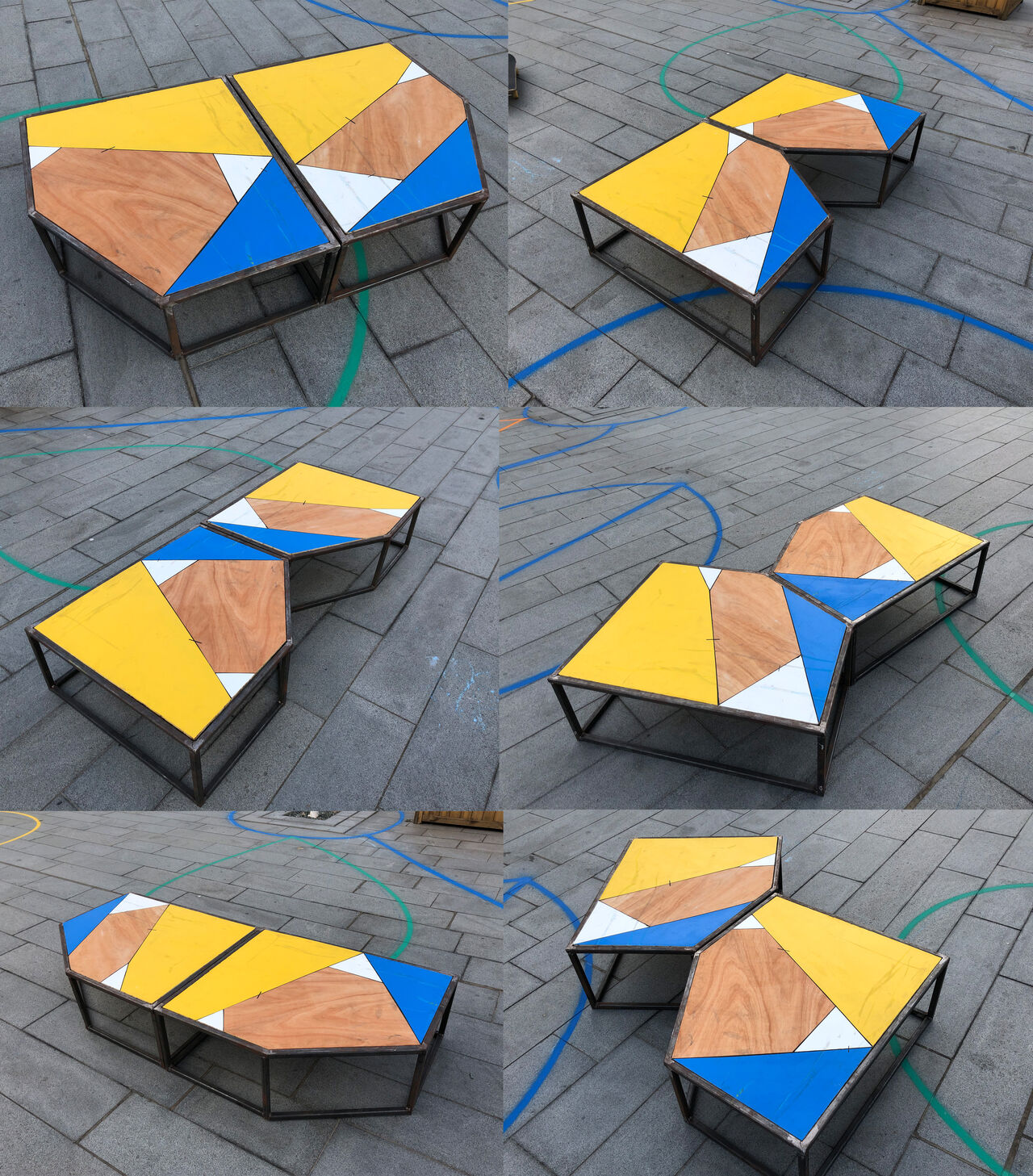 The first intervention in the space mirrored the angle that the bench slopes in at. This created a steep block known as a ‘wallie block’ that skaters bang up against to get onto or over the bench. Although a good starting point, it wasn’t accessible to all skill levels. I iterated on this and created a quarter pipe that could be inserted into the bench in the same way.

It was important that the interventions I designed were movable. After hosting a co-design workshop with a group of local skaters, there was a clear desire for movable ramps and obstacles so they could be rearranged. This allows for the maximum number of uses, as opposed to a single, dictated use.

Throughout my IED course, we learned the importance of bringing the user into the design process. Particularly when exploring public spaces. My project revolved around the culture of skateboarding and utilising skateboarders to increase the space’s social dynamic. So it was important to make sure I created something they actually wanted to use. Not just what I thought they would want to use. If I had tried to do this singlehandedly it wouldn’t have worked. Projects like this one are inherently user-centred, so it’s really important to bring the user into the design process to help keep the design authentic.

See V//ALLIE in action in the spaces around the museum in the video below.

While my initial interventions came from working in the studio and workshop independently, I brought them out to V&A Dundee to test them with groups. I was able to get an honest reaction to my designs when they were presented in organic settings like a live-skate session. Users were able to point out what they did and didn’t like, what they think would work for the next steps, etc. I then went back to the studio and began sketching and model making to develop my ideas.

I also hosted a more structured co-design workshop at the museum. I wanted to pick the brains of a focus group of ten local skaters. I tried to represent the diversity of the Dundee skate scene in this group. Participants included five generations of skaters, as well as absolute beginners.

I wanted to get a balanced gender mix within the group too. It’s important to finally see skateboarding move away from its male-dominated roots and help facilitate the more recent growth in women participating in the sport and celebrate that. I did this with the help of three members of the Dundee Women’s Skateboarding Club coming along to give their ideas. 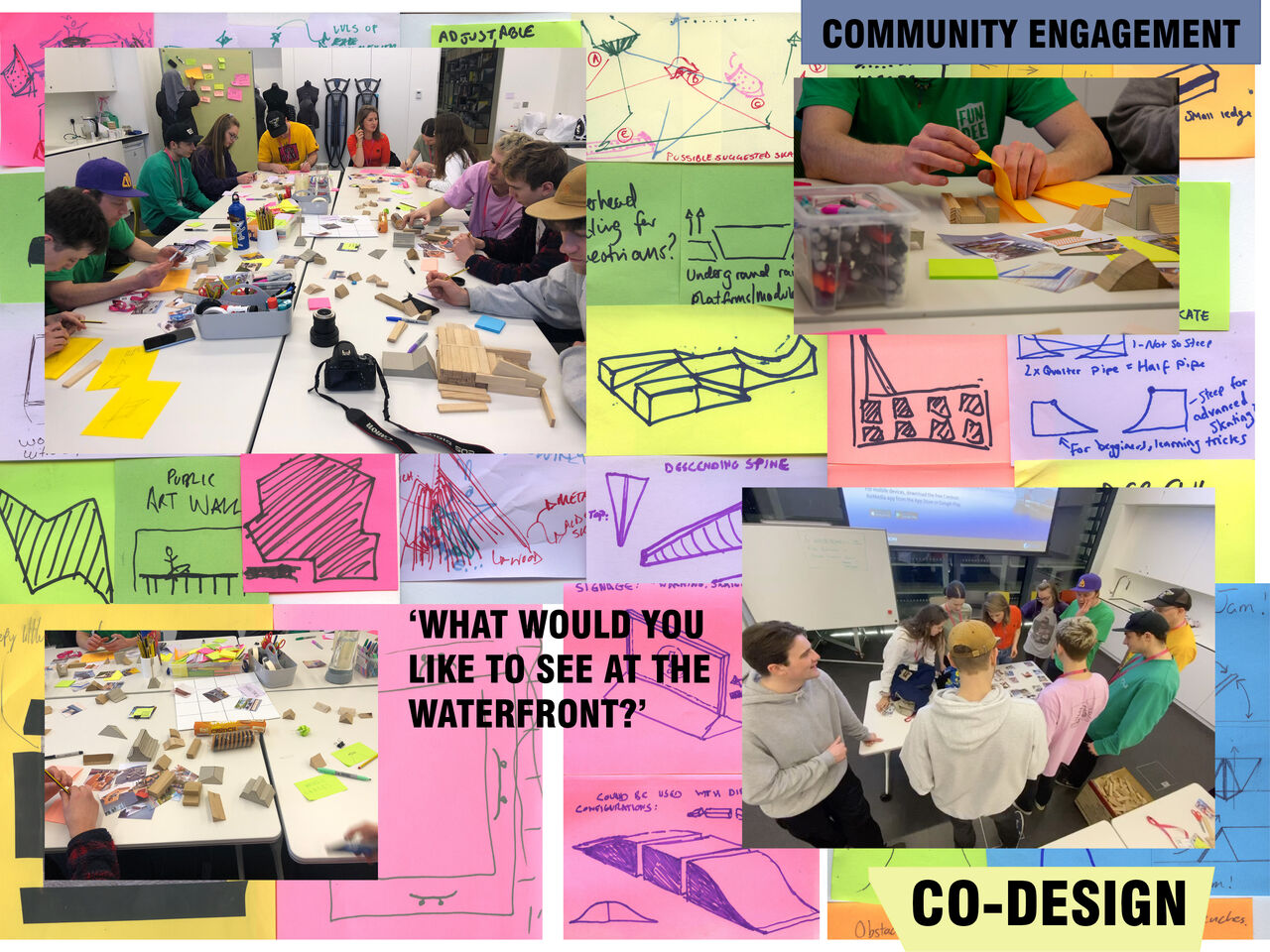 I showed the group initial prototypes, sketches and models alongside images of other projects and inspiration from around the world. I asked them to think about what they would like to see at V&A Dundee, both as a skater and as an everyday pedestrian.

Through sketching, discussing and playing (with models and building blocks) we ended up with a board full of ideas about what they might like to skate and engage with. This spanned a variety of elements and themes, such as street furniture, sculpture, shelter, skatepark, surface pattern and playground. 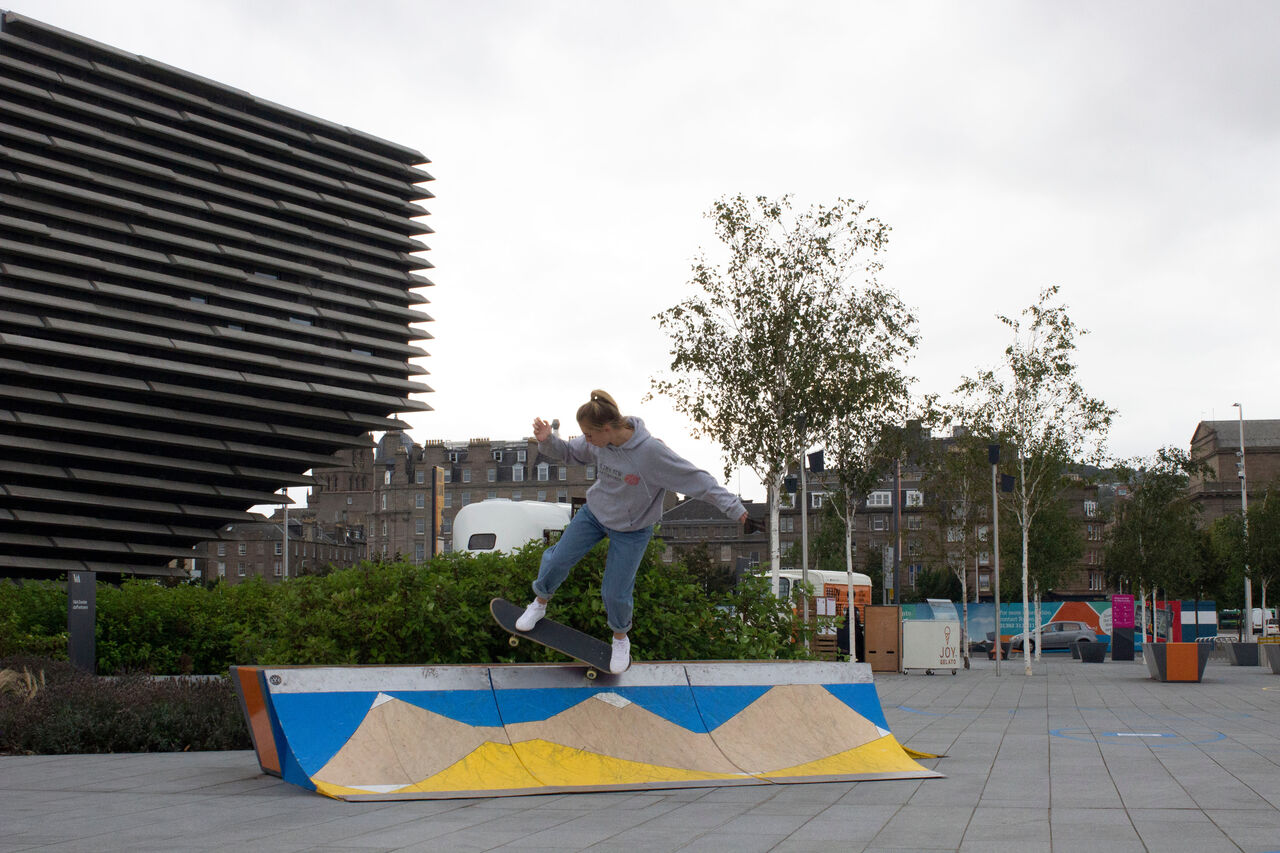 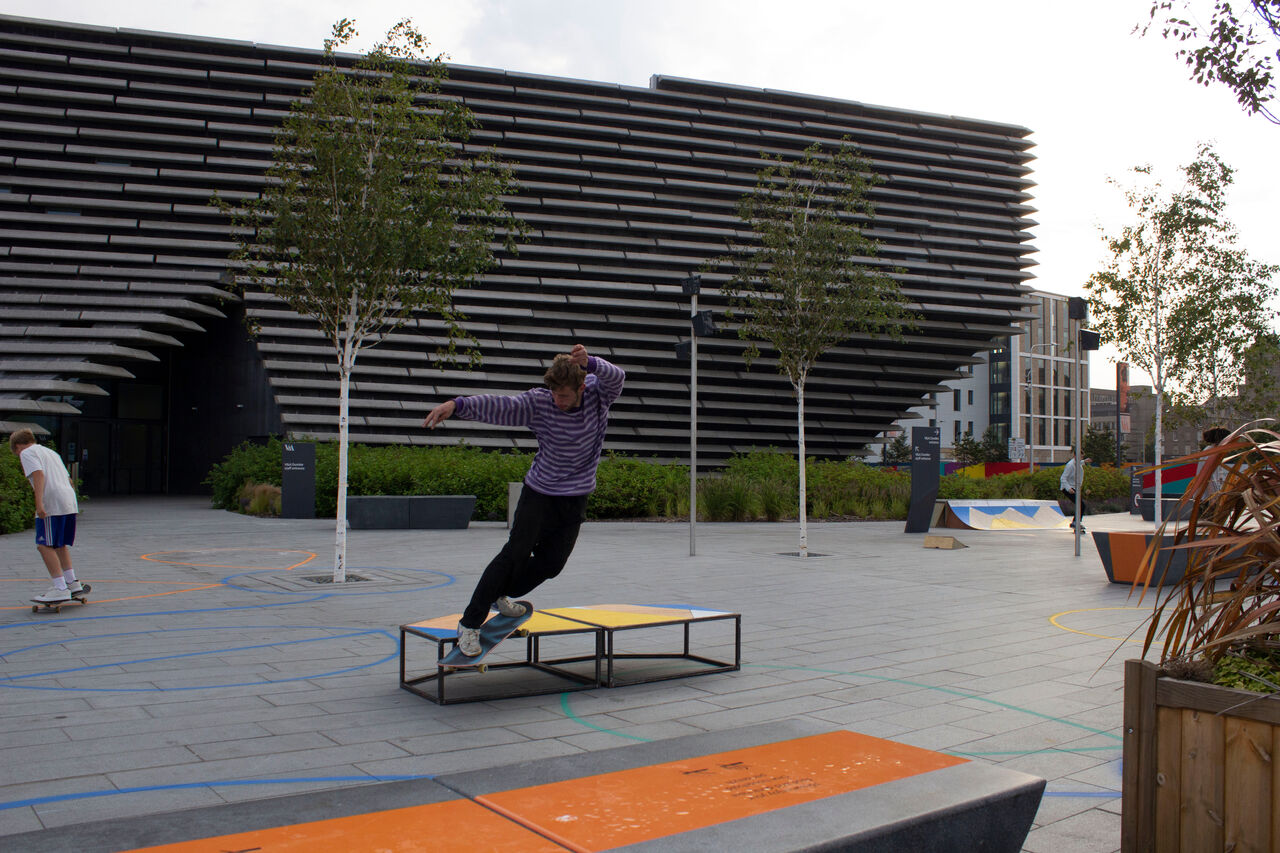 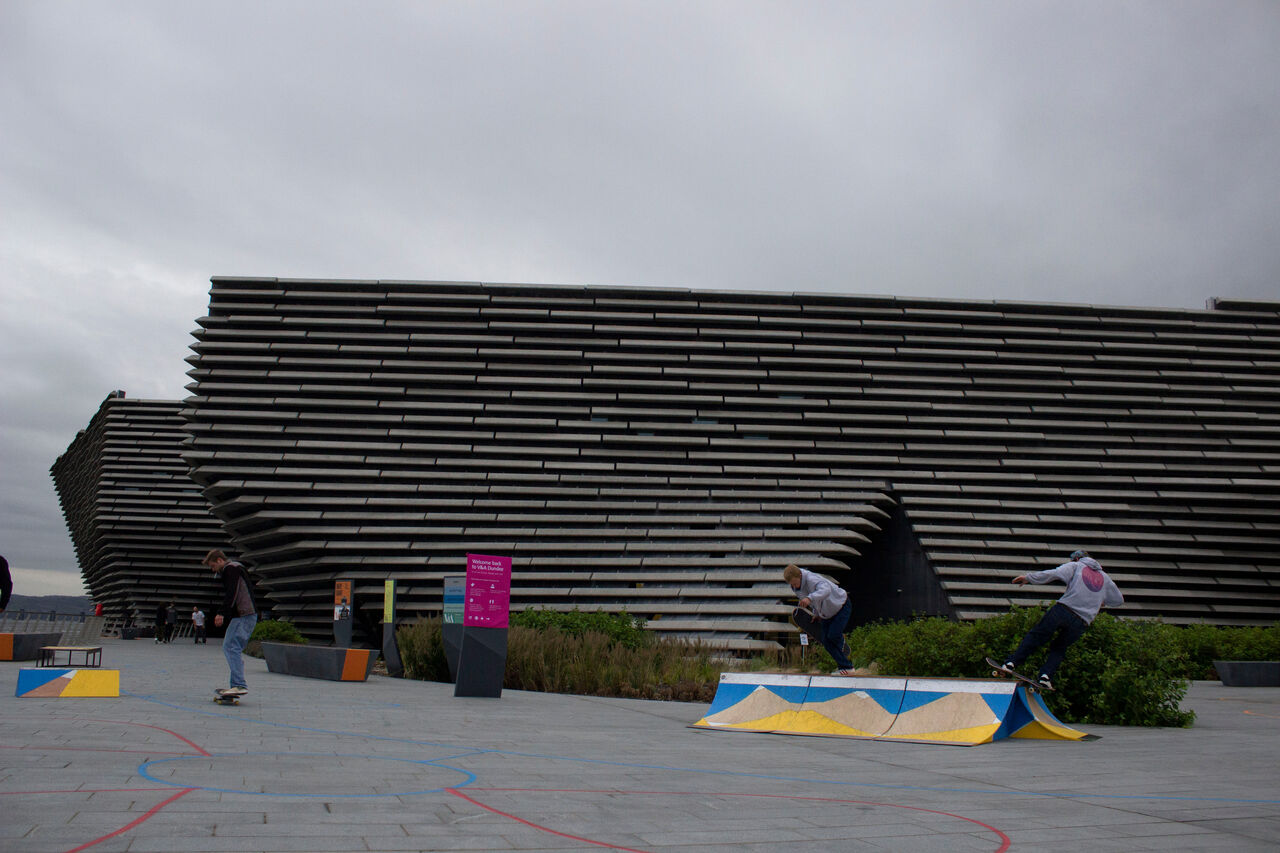 Modularity was a key finding from the co-design work. With the existing modularity of the benches, I wanted my objects, interventions, ramps and furniture to engage directly with them and build on their arrangement, taking it further. This was important to the focus group, giving them a wider variety of ways to use the pieces.

This also helped when I engaged with V&A Dundee. When I worked with them to develop a risk assessment and obtain public liability insurance, it was important that my creations were temporary and portable. For safety, the pieces I designed could only be out when I was able to supervise so they had to be easy to move on and off the site. 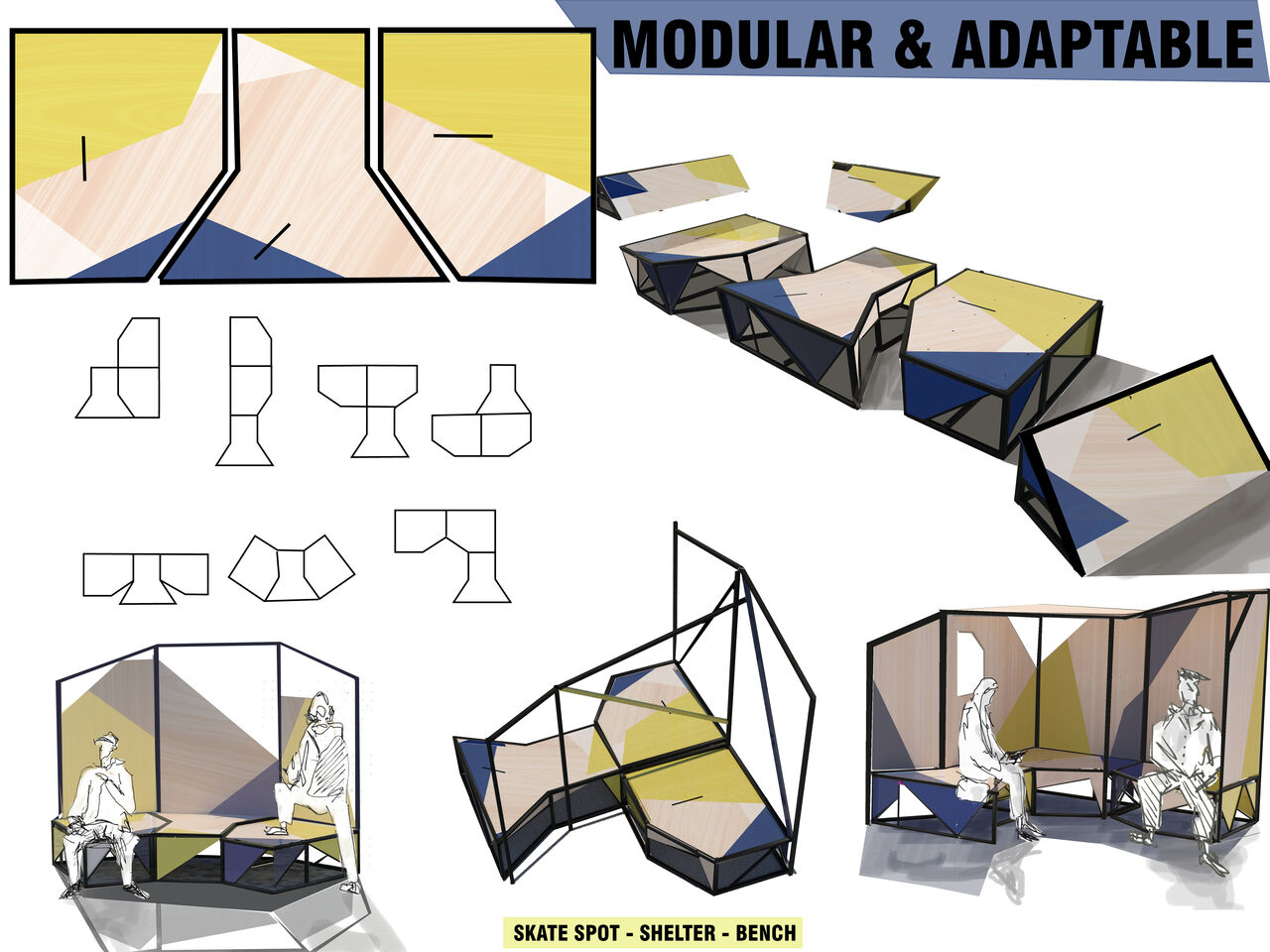 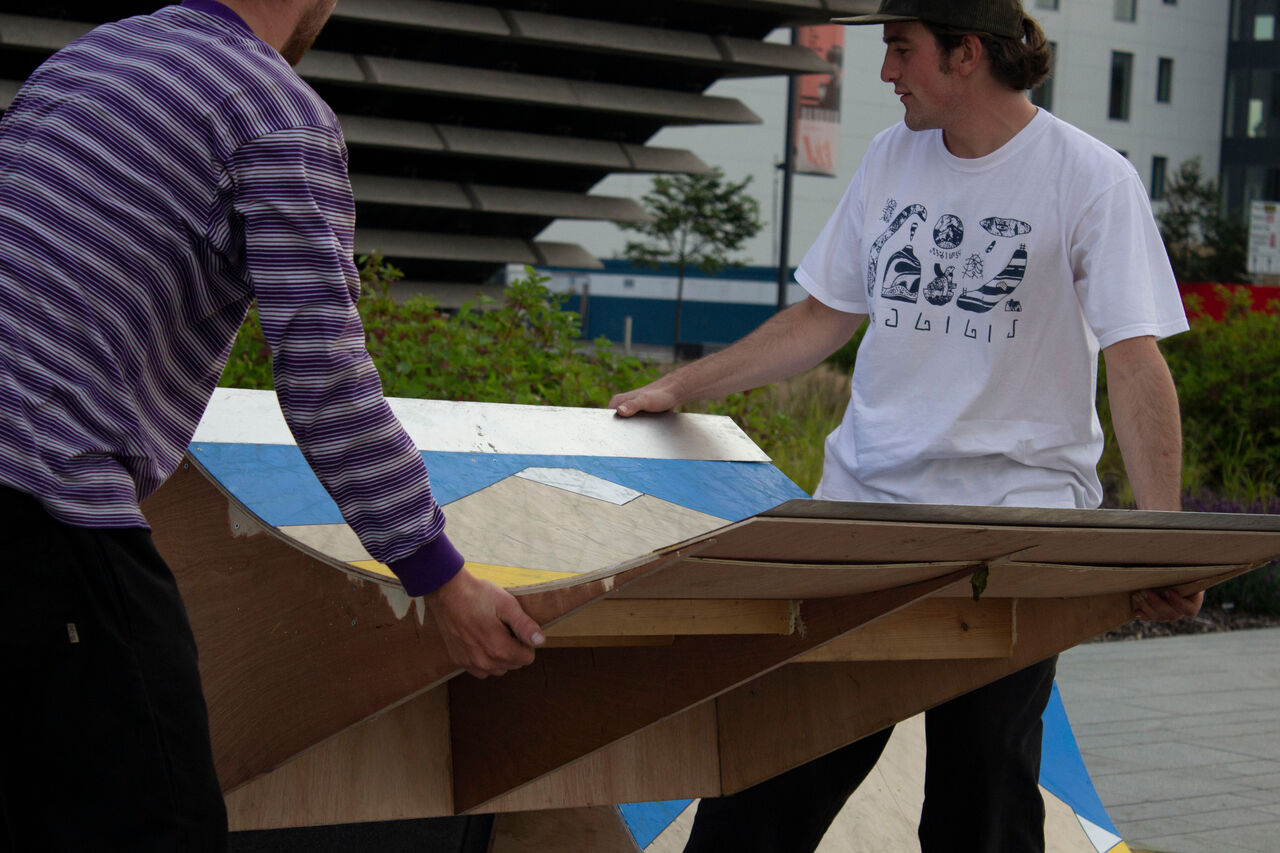 Modularity was a great solution to this: the entire final bench design was quite large in terms of floor space (1m x 2m) and one of the final quarter pipe arrangements spanned the length of three of the stone benches. These would have been difficult to transport and store without being modular.

Thanks to the co-design sessions, my ideas developed throughout the project. I used a variety of sketching tools to help me with the design process, from hand sketching to CAD modelling, 1:20 card models to 1:1 scale prototypes.

3D sketching is a really helpful way to understand the space something will occupy, the form it will take and how well it might function. But working purely in a sketchbook or on a screen misses out quite an important part of the design process for me. It was great to have a project that really lent itself to making.

I developed my passion for making more and more during my degree. I discovered the potential it has to help me with my sketch process and developed my skills alongside the mentorship of local furniture maker, Leo Norris. I was doing a lot of steel welding and woodworking by the end of this project! 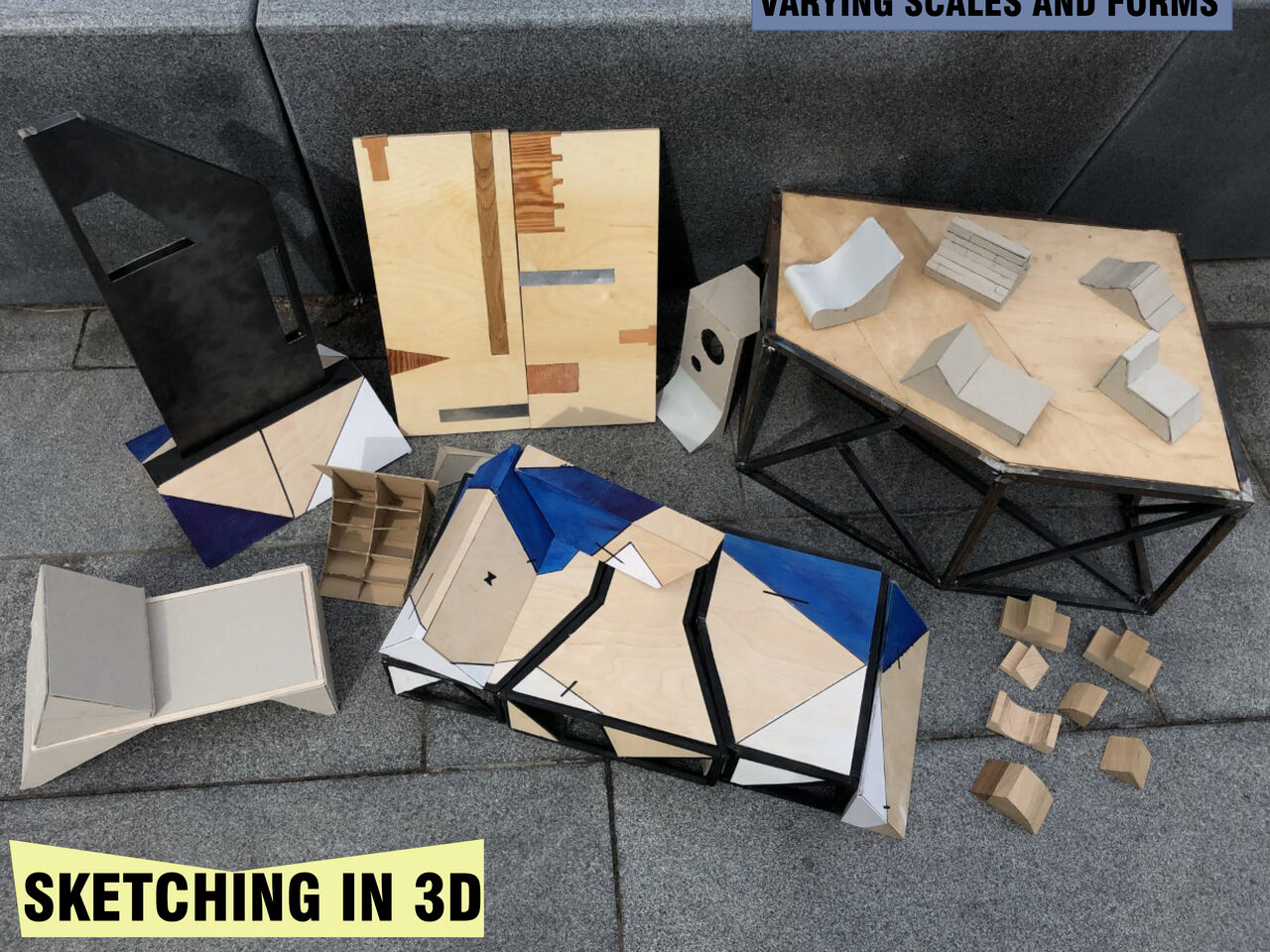 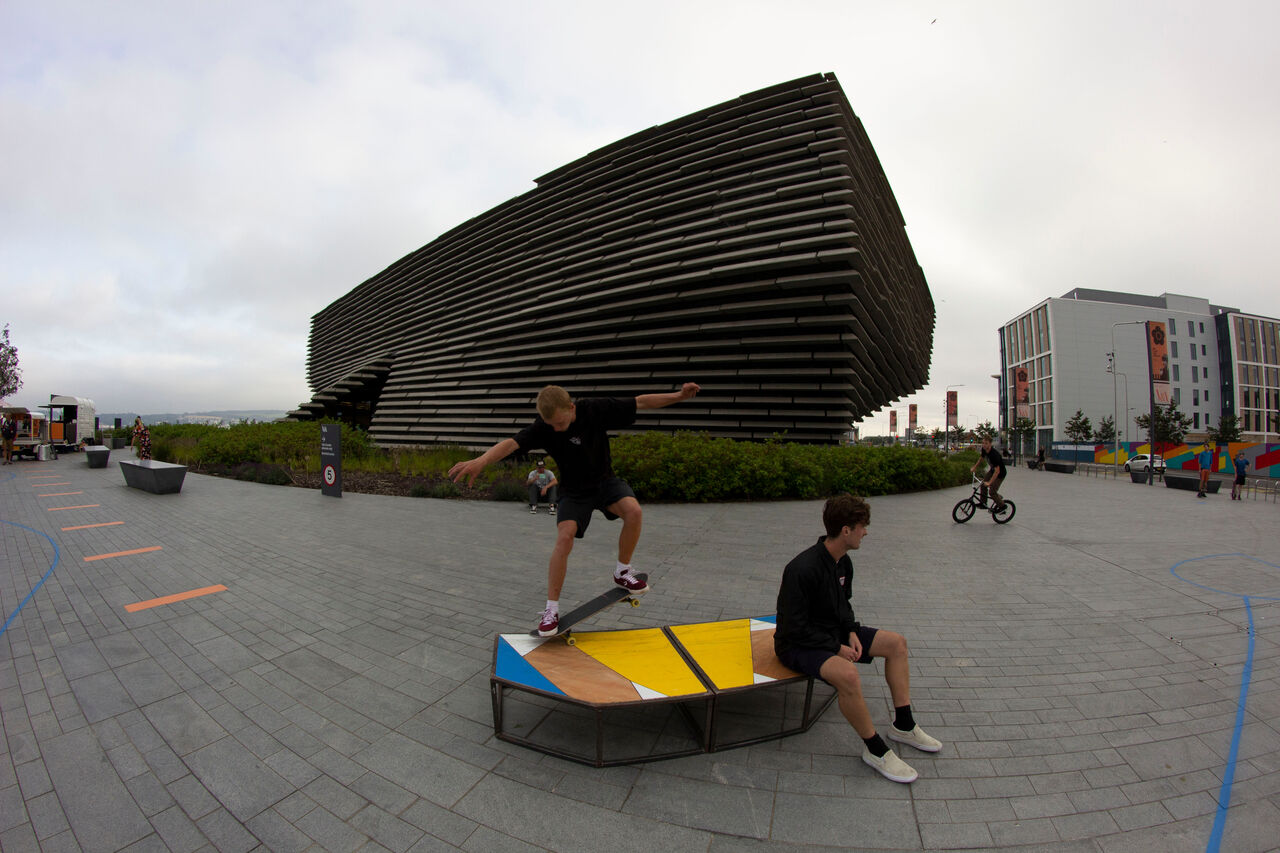 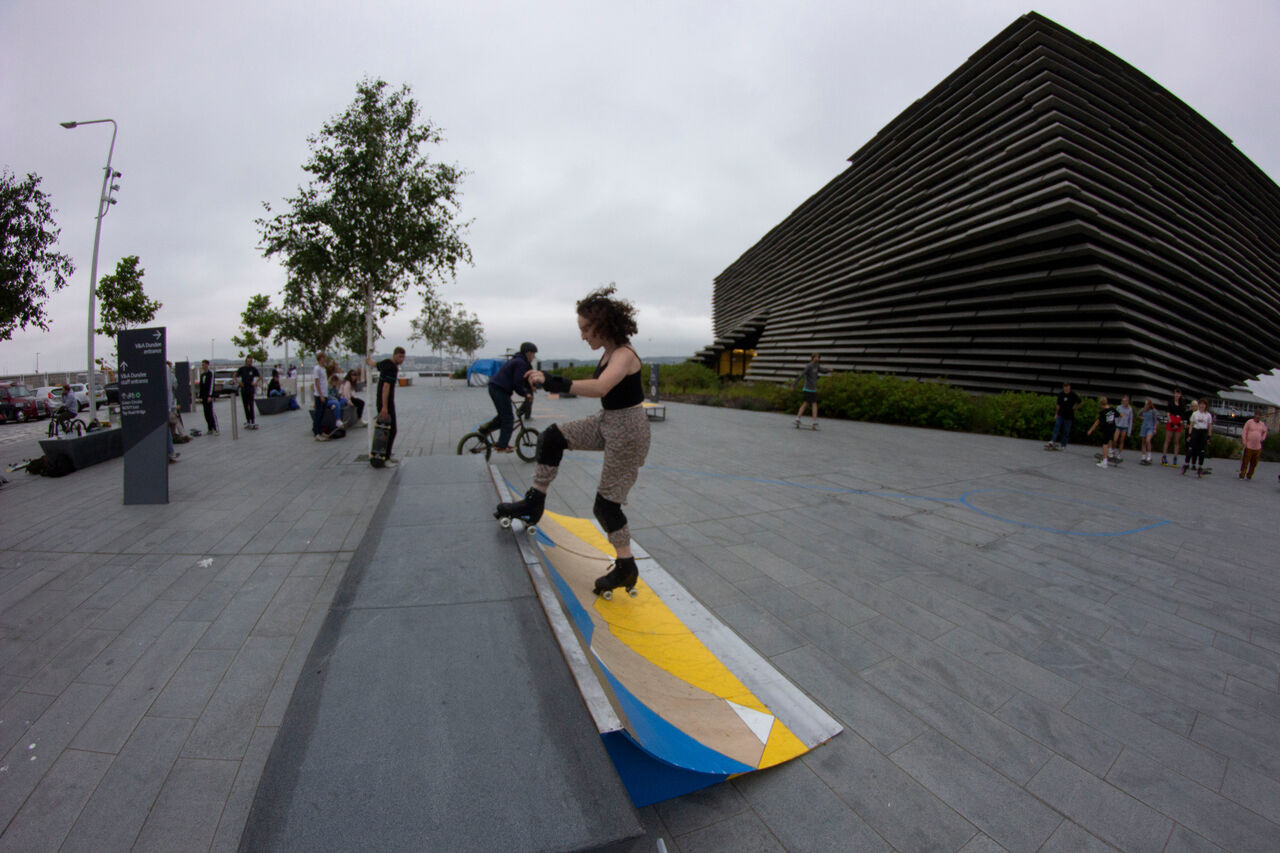 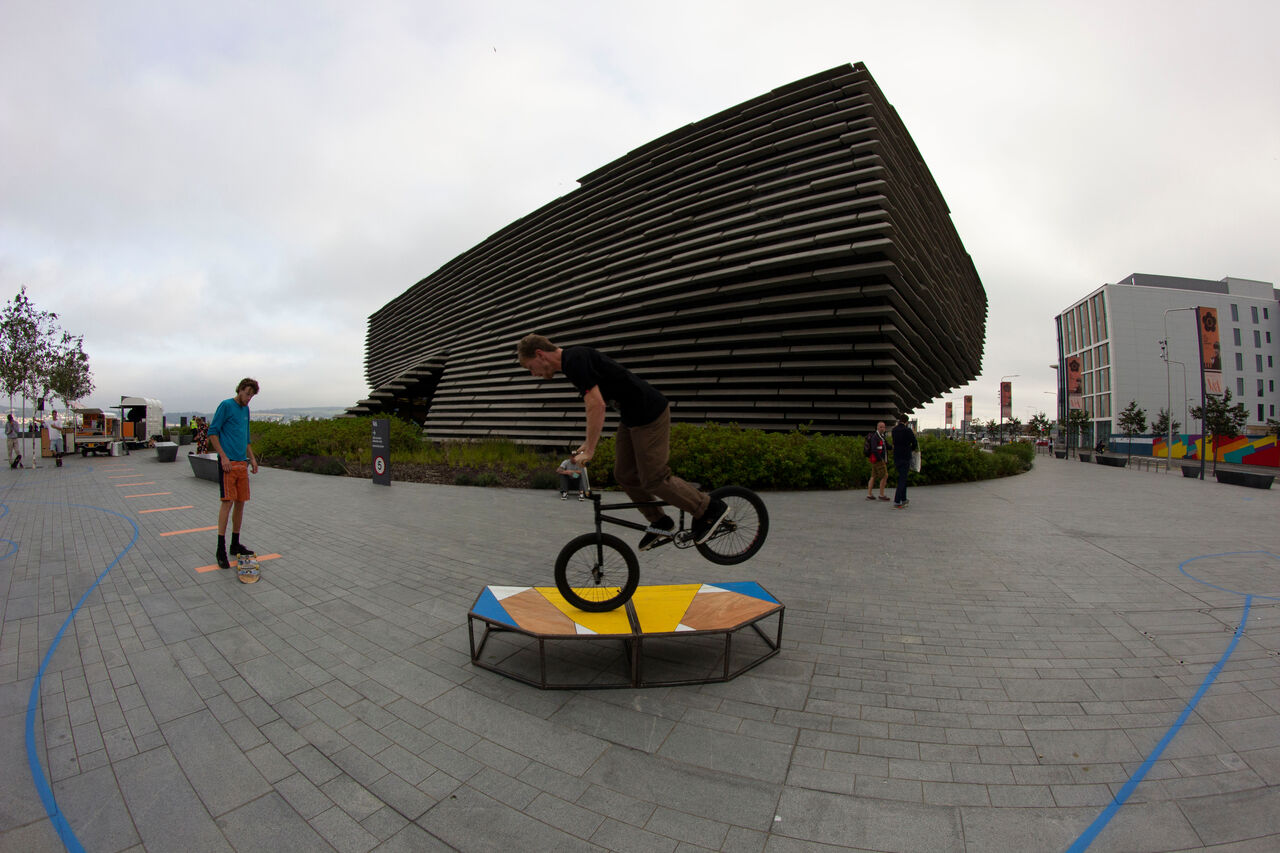 The visual language and aesthetic I developed for my pieces was taken directly from V&A Dundee’s building and surrounding environment. By tracing over different site drawings and elevations, I began playing with the invisible geometry of the building, picking out different hidden shapes from the drawings and manipulating them into 3D forms.

I was also playing with the ‘broken line’ pattern inspired by the concrete blocks of the museum’s façade. I incorporated this into the surface pattern of my creations. These broken lines and invisible geometries were emulated alongside a contrasting colour pattern of yellow and blue. I took inspiration from the movement of water surrounding the museum and the various shades of yellow that the grey concrete creates when hit by the sun.

I think the overall aesthetic lends itself to the site because it was inspired by and responded directly to the space. The bold palette helped bring colour to a site dominated by grey concrete, while successfully working alongside other hints of colour present in the space, like their social distance-enabling Chalk Playscape.

Skate parks and spots have such great potential in animating a space and attracting diverse and dynamic audiences to them. This project has brought people to the area around V&A Dundee that otherwise might not have visited. Many of the skaters hadn’t been into the museum before! But they popped in for the first time to use the toilet or to get a coffee during our sessions. They’d come out buzzing about how cool the interior is!

My project has shown an increased social dynamic of the site. It’s given residents of the city another reason to use the site and brings a lot of creativity and energy with it. Particularly in light of COVID 19, it’s important that we start utilising our public spaces more.

And ‘Skateboard tourism’ is a thing! My friends and I have travelled up and down the country, and even abroad, specifically to go skateboarding. While in these different places, we visit shops and cafes, use public transport and in turn benefit the local area.

I believe links created between grassroots communities and an establishment like V&A Dundee are important for the waterfront development. It helps create connections with the city’s residents and give them a level of ownership of the space and the city.

I would love to see the museum and Dundee City Council take this project further. I hope they have seen how successful this project has been in terms of engagement and finding a different way of using the space around the museum.

Mickey Fenton is a 2020 Interior & Environmental Design graduate from DJCAD in Dundee.