Open daily except Tuesday
Menu
Close
V&A Dundee
With Ocean Liners: Speed and Style closing this month, Curator Meredith More explores Scotland's role in bringing these floating palaces to life through the lens of one the most-loved ships.

The Queen Mary ocean liner was, without doubt, one of the finest achievements of the Glasgow shipbuilding industry. Built by John Brown’s shipyard on Clydebank from 1930, the Queen Mary set new standards for speed, comfort and safety. Many Scottish artists and designers also contributed to the ship’s luxurious yet homely interiors, which many say earned it its place as the nation’s favourite ship.

John Brown’s shipyard was world-renowned for its expertise in practical shipbuilding, making it the ideal choice for the construction of Cunard’s latest liner. It was one of the only British shipyards to have its own experimental test tank in which to test performance, allowing engineers to test wax models of the ship many thousands of times to perfect the design. At the time the Queen Mary was built, John Brown’s yard took up around 80 acres, with 8 slips for constructing ships. The colossal Queen Mary, which was over 1000 feet long, required one of the slips to be extended and even for some parts of the Clyde river to be widened and deepened. Over 300,000 people were involved in the ship’s construction, from architects and engineers to welders and riveters. 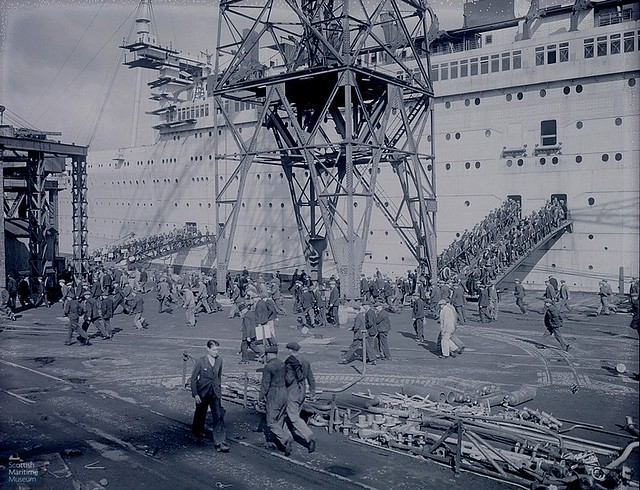 The ship was an exercise in perfection rather than innovation. Sceptical of recent European innovations in hull design, such as the dramatically raked hull of the French Normandie, the Cunard Line opted for a more traditional approach. While the Queen Mary was significantly larger and faster than previous ships, the design imitated the line and form of classic British liners like the Mauretania and Aquitania. Although some criticised this conservatism, the Queen Mary’s tried and tested design and technology ensured the ship’s impressive record at sea. Indeed, the Clyde-built Queen Mary dominated the transatlantic route for decades, holding onto the Blue Riband (the award for the fastest Atlantic crossing) from 1938-1952.

Just as some critics bemoaned the traditionalism of the Queen Mary’s superstructure and hull, the ship’s interior design was also considered conservative, being more akin to a country house than a modern ocean-going hotel. A promotional brochure for the Queen Mary published to celebrate its maiden voyage in 1936 said ‘The rooms will be perfectly satisfying to the most cosmopolitan conceptions of culture and good taste and at the same time convey the atmosphere of restfulness and comfort associated with the most dignified of country homes’. And indeed, many passengers came to love the comfort and homeliness of the Queen Mary during often long and tedious journeys across the ocean.

Although the Queen Mary was a very British venture, with artists, designers and manufacturers from all across the country involved, it’s worth picking out some of the Scottish practitioners who gained exciting opportunities on board. One such practitioner was the artist Doris Zinkeisen, who was commissioned by John Brown’s along with her sister Anna to decorate some of the rooms on board the Queen Mary (1936). Born in Glasgow, they moved to Middlesex with their family in 1909 and were later trained at the Royal Academy Schools in London. They became well known for society portraits and theatre design in the 1920s, and their figurative, decorative style was considered a perfect match for the new Queen Mary.

Doris Zinkeisen was responsible for the design of the Verandah Grill, the ship’s most popular restaurant and night club, which in 1936 was described in Vogue by Cecil Beaton as ‘by far the prettiest room on any ship; becomingly lit, gay in colour and obviously so successful that it would be crowded if twice its present size’. Easily the most famous space on the Queen Mary, it was the ideal spot to run into a celebrity, with Clark Gable, Elizabeth Taylor and the Kennedy’s all known to have made appearances.

The Verandah Grill was one of the least conservative spaces on board. Doris Zinkeisen designed an ultra-fashionable 1930s scheme with a chic black carpet, pale pink and white walls and theatrical dark red curtains patterned with stars. It was conceived of as an intimate space, with small tables designed for two. On the walls were murals she executed by hand depicting characters from the circus, theatre and pantomime. Charming, but with a hint of sensuality, the murals’ design contributed to the lively atmosphere of the Verandah Grill, which was a performative space in which to see and be seen.

And the Zinkeisen sisters were not alone. The work of many Scottish artists and design firms were showcased on the Queen Mary, being as they were perfectly located to fit out the new liner being built on the Clyde. Glasgow furniture maker H. Morris & Company were contracted to provide functional and modern furniture and fittings for the ship, and carpet manufacturer Templeton’s designed stylish carpets for cabin class and public rooms, including the Long Gallery, the Drawing Room and the Main Lounge. Soft colours and swirling art deco patterns characterised Templeton’s work for the Queen Mary. To ensure a luxurious effect, they attempted much heavier or deeper pile carpets than usual, and in fact the carpet for the Lounge weighed about 3 tonnes!

The Scottish engineers, shipyard workers, designers and artists that worked on the Queen Mary played a very significant role in the ship’s overall success, both as an engineering marvel and a much-loved floating hotel.

Meredith More is a Curator at V&A Dundee.