A recent loan from Strathclyde Archives, the 'Plan for the Scottish Zoological Garden' (1913) in our Scottish Design Galleries shows the first part of Edinburgh Zoo to be planned and built. The design was by Patrick Geddes, in close collaboration with his daughter Norah Geddes and son-in-law Frank Mears. Norah became known in her own right for her public-spirited projects, from the West Port Garden in Edinburgh to playgrounds in Dublin.

With a background in natural history, I was drawn to the plan of the zoo and excited to show it off online. Before sharing its arrival on the museum’s Twitter, though, I needed to find out a bit more about the object and its creator. As I dug around, I found myself getting closer to Patrick Geddes; the more I found out, the more connected I felt to this town planner from the mid-19th century.

As well as a pioneering and globally influential town planner, Patrick Geddes was a Scottish biologist, philanthropist and sociologist. He studied under Thomas Henry Huxley and later in his career met Darwin. I’m actually not a Victorian polymath (twist!), but I am Scottish, and I studied zoology at university; Huxley and Darwin both featured highly in my degree.

I continued to find out more about Geddes. For example, he was born in Ballater, Aberdeenshire. Dear readers, that’s my very own home village! I wonder why I never knew that Ballater birthed this industrious and prolific person, but it was a special moment. Perhaps because Ballater is such a tiny place and the last thing I expected was for Geddes to be from the same small place I was.

Like me, Geddes moved to Dundee in his mid-thirties, where he held the chair of Botany at the University of Dundee from 1888 to 1919. I, of course, don’t hold that chair. I sit on mine at V&A Dundee, where I look after digital content across the museum. The Geddes Institute for Urban Research at the university continues to develop Geddesian approaches to city planning, inspired by his quote "Think globally, act locally".

Getting back to the plan for the zoo, I was pleased to discover the ethos behind its design. I’m passionate about the treatment and care of animals, and zoos can be a divisive topic: the exploitation of animals and keeping creatures cooped up in captivity is hard to justify, but the conservation work carried out in zoos all over the world is vital, as is the job they do in raising biodiversity awareness with the public.

The design Geddes came up with, alongside his daughter and son-in-law, was inspired by zoos in Hamburg and New York, which moved away from the caged menageries of the Victorian era and instead promoted large open enclosures and naturalistic settings. 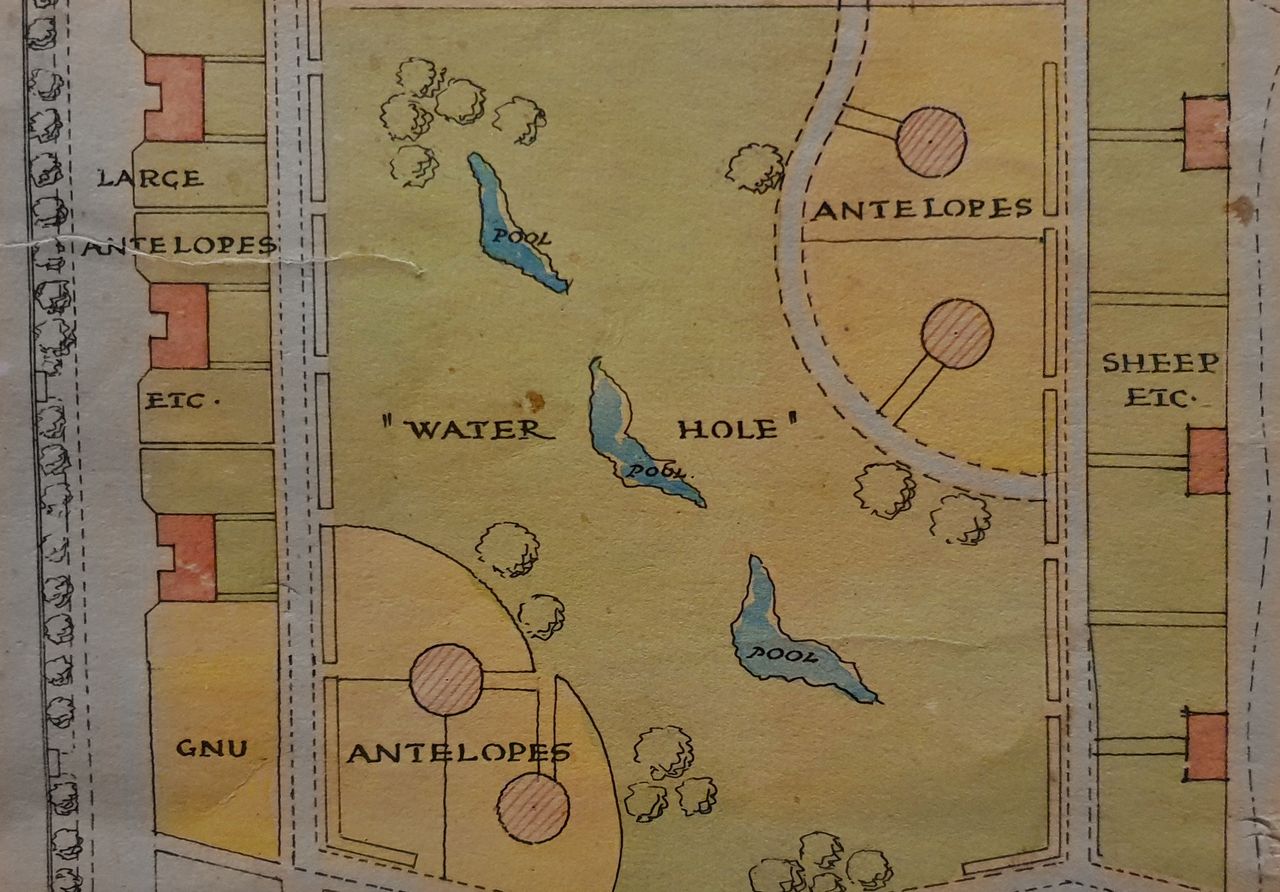 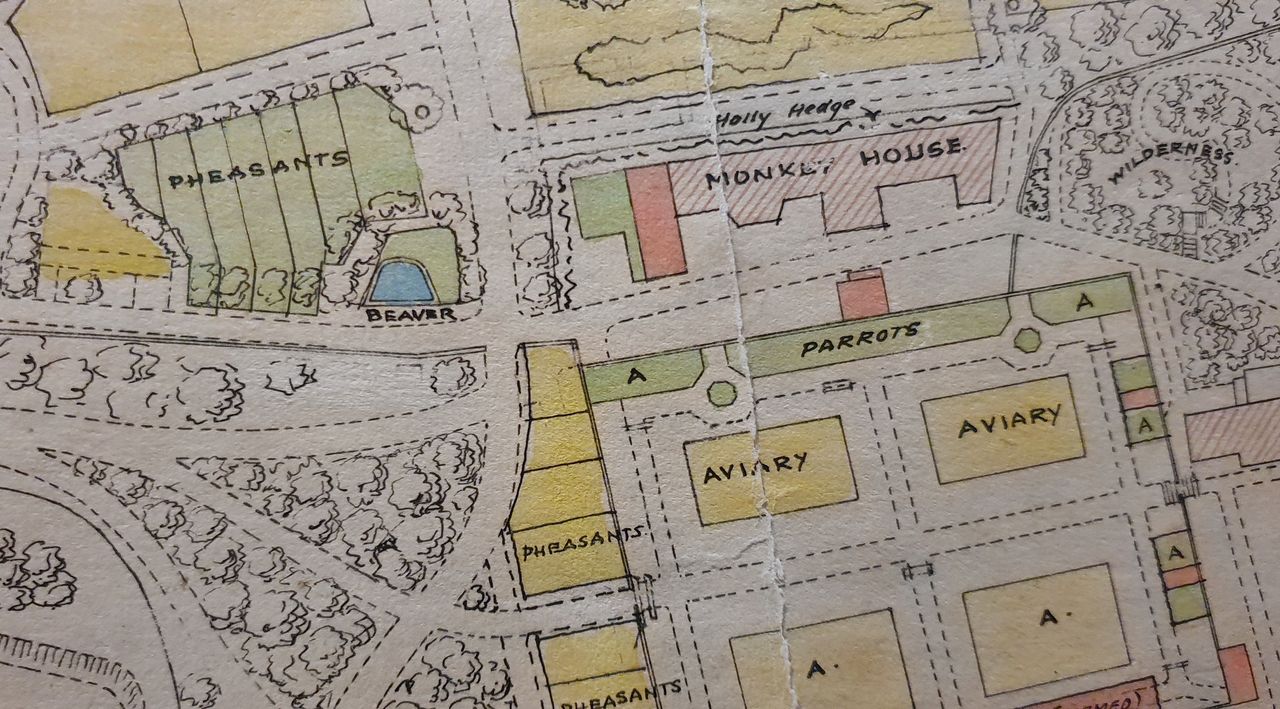 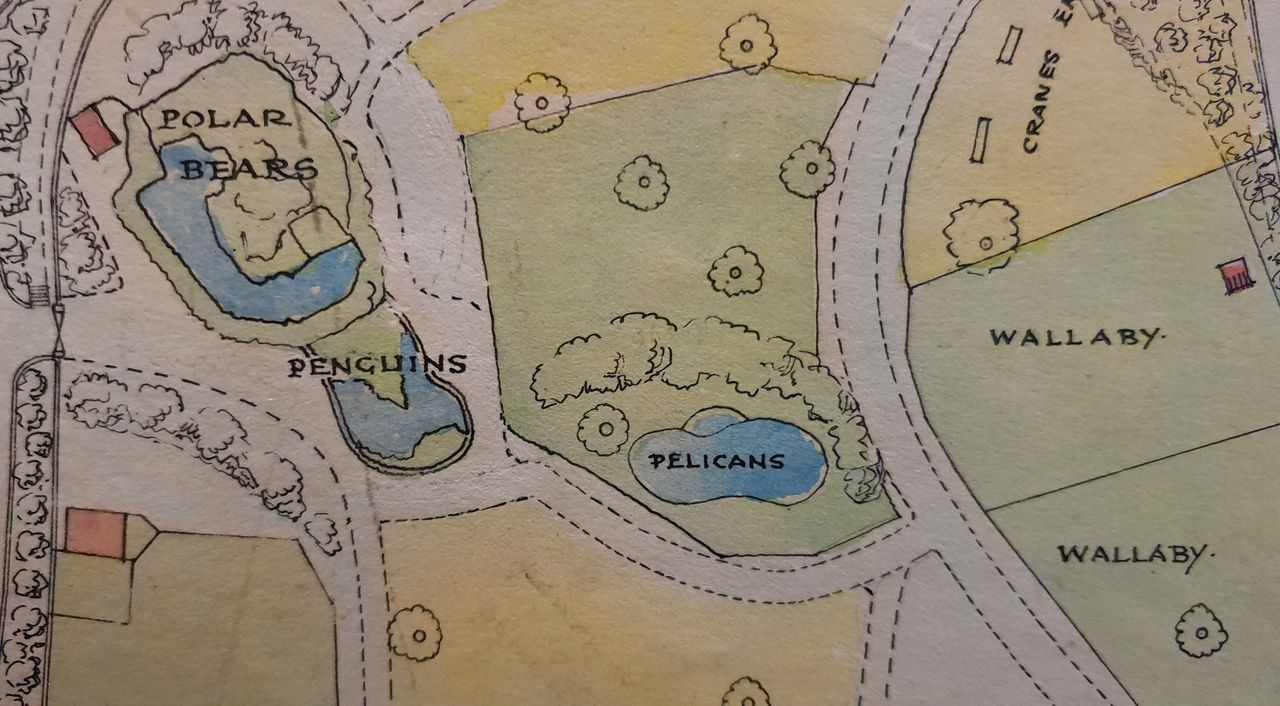 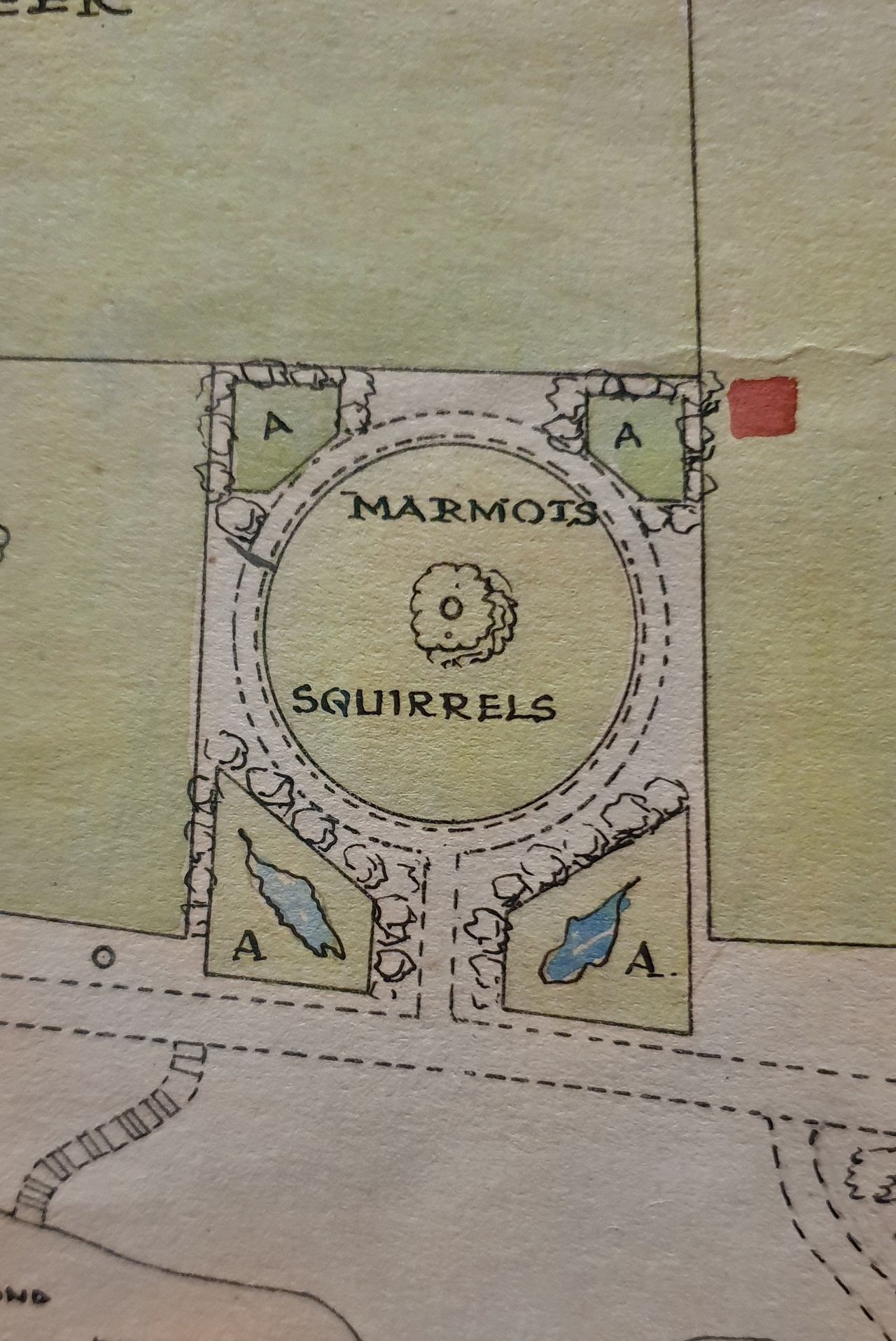 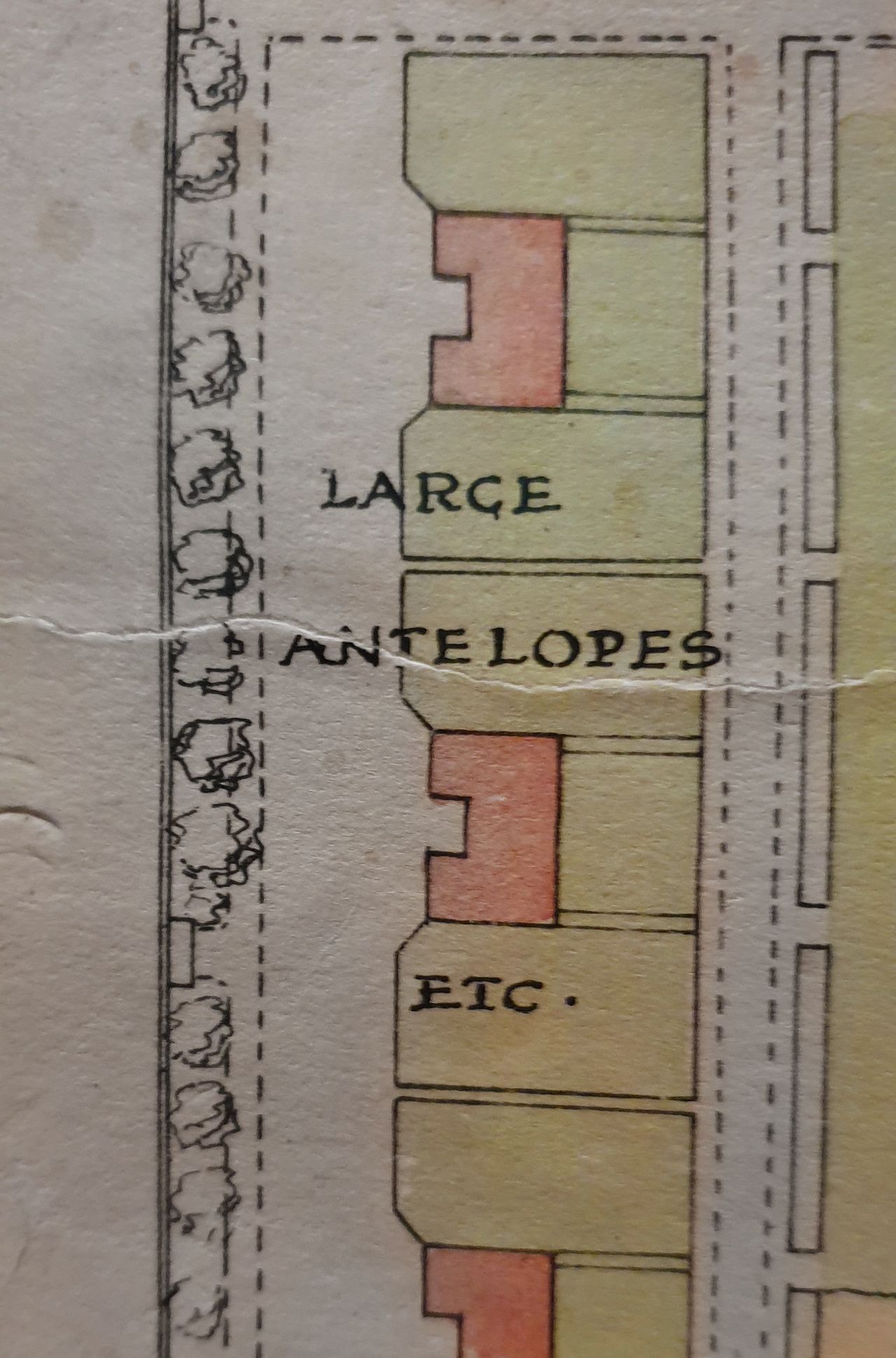 The Scottish Zoological Garden had a pioneering approach to zoo enclosure design, with the aim of improving the wellbeing of the animals and also the experience of the visitors by revealing animal behaviours within their own "natural habitats". We can argue about how successful (or not) this approach is, but it was certainly forward thinking at the time.

While I was at first drawn to this object for one particular reason (ooh, animals 🦌), a few surprising and pleasing twists later left me feeling much more connected to an object in our Scottish Design Galleries than I expected to be. And not only do I now look at his object and think “he’s from where I’m from”, but it doesn’t hurt to know he was a bit of a babe too.

I'll let Patrick Geddes sign this off in his own wise words that are as true today as they were a hundred years ago: "In the ideal zoo...not only should the animals be happily free, but...we ourselves should be again in nature, free in greenwood or forest belt or grassy glade..."

Russell Dornan (34!) is a Digital Producer at V&A Dundee.