Reopening Sat 1 May
Menu
Close
V&A Dundee
V&A Dundee
Scottish Design Icons is a series of small articles showcasing the big hitters of Scottish design. This month, Farzana explains how one of the galleries’ most dazzling objects sparked off a wealth of family memories.

Read this story in Urdu.

I was born and brought up in Dundee. My grandfather, Haji Taj Mohammed, came from India specifically to work in the jute mills and was one of the first Muslims to settle in Dundee.

As a young girl, I always had a fascination with tiaras and jewellery. At the weekends, I used to enjoy dressing up and would find as much shiny stuff as possible to wear, just for fun. I loved to put on fancy dresses and a tiara would always complete my outfit by adding that touch of sparkle! When I first walked into the Scottish Design Galleries and at V&A Dundee and set my eyes on the stunning tiara, my childhood memories all came flooding back. 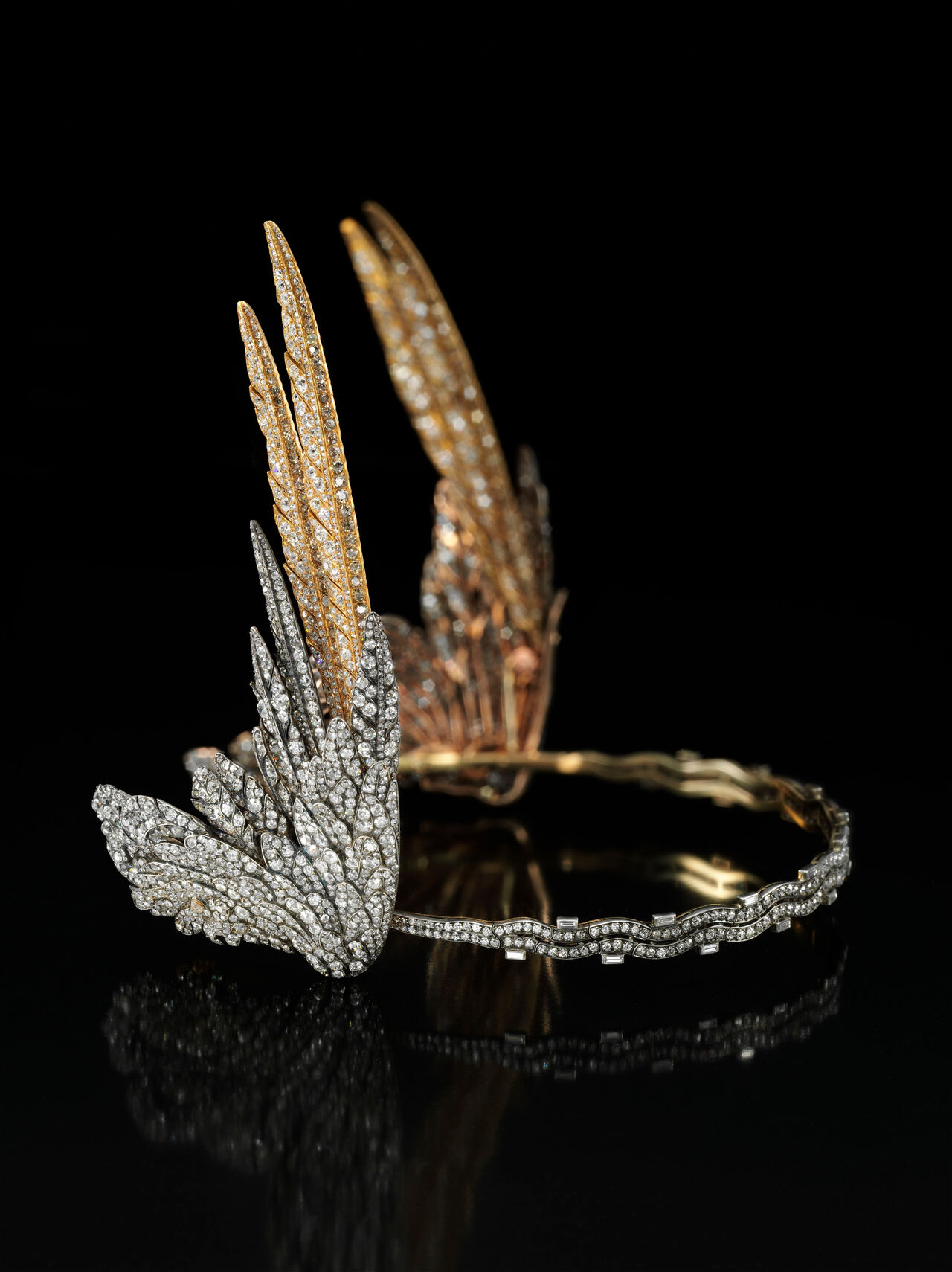 Religious celebrations, such as Eid, were always special occasions and an opportunity for all the girls to show off their fanciest of dresses, put on elaborate henna ink tattoos and accessorise with bling. I would get a lot of compliments and it made me stand a bit taller.

Traditionally, no-one would wear gold until they were married. In western culture a gold ring symbolises marriage, whereas in South Asian culture it’s a gold bangle. Growing up, my mum would bring me colourful bangles back from her holidays in Pakistan, although these were usually plastic, being safer to play with than the more traditional glass bangles and a lot cheaper than gold! 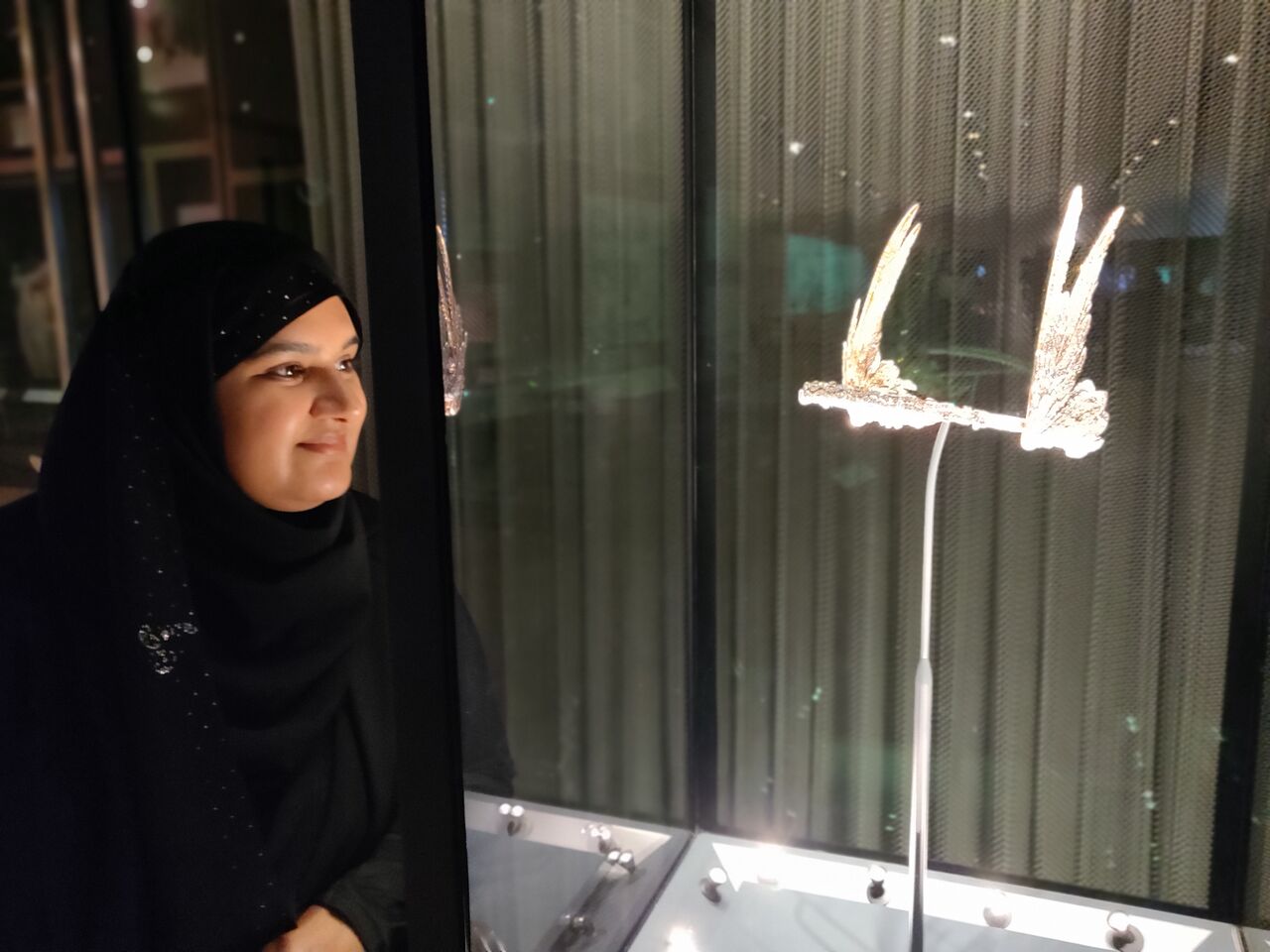 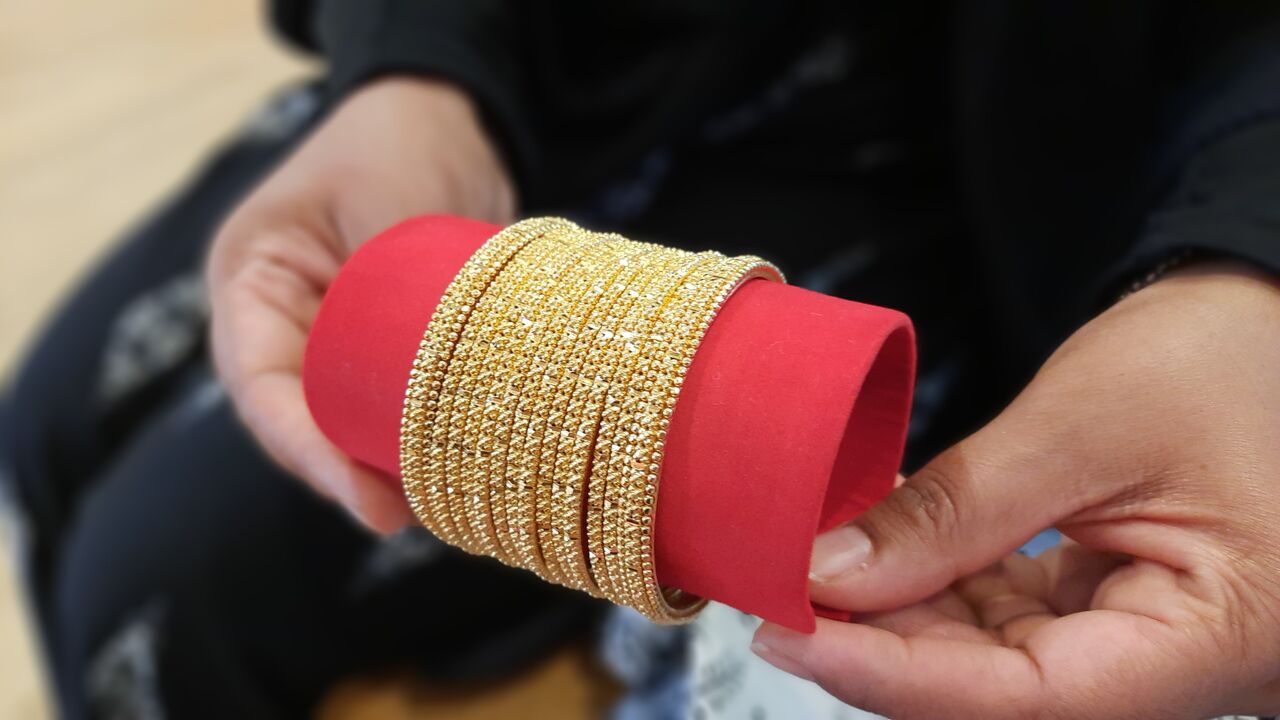 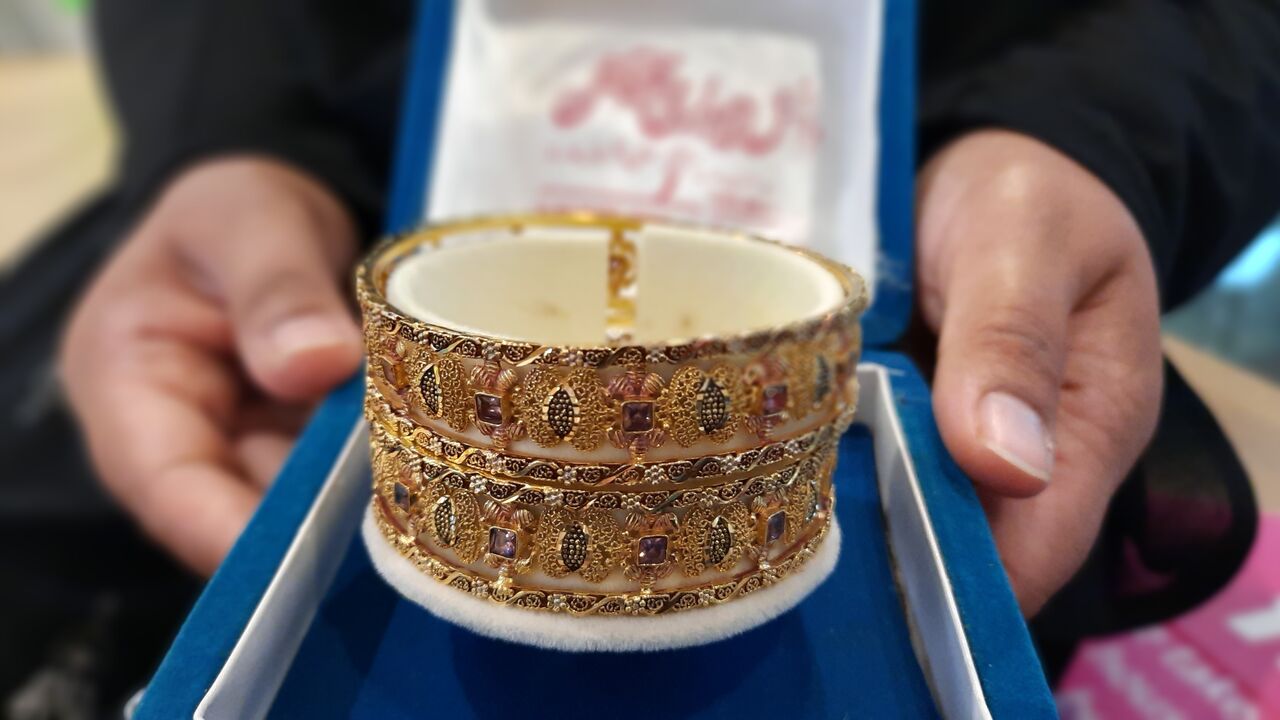 When I grew up and had outgrown the plastic ones, my mum gave me a set of 24-carat gold bangles that were passed down to her by my grandmother. They are my most treasured piece of jewellery and to keep them safe and special, I only wear them once a year, usually at family weddings.

South Asian weddings are generally much larger than their western counterparts. It is not uncommon to have gatherings of up to 500 people, where it can be difficult for even the bride and groom themselves to recognise everyone who attends. I remember one when, seated at a table with my dad, the bride and groom came over and had no idea who I was!

My husband is from Pakistan where he owns the family business, an embroidery shop in Faisalabad, Pakistan’s third largest city. It specialises in making wedding dresses from scratch, including my own: all hand-embroidered in a wide range of colours.

In Pakistan, the divide between rich and poor is very wide, so the shop also redesigns and supplies wedding dresses for brides unable to afford their own. After my wedding, I donated my dress. Since then, it has been enjoyed by ten other brides, who all can feel as special as I did.

Just as I commissioned my own custom-made wedding dress, the tiara was commissioned by the Duchess of Roxburgh, Mary Crewe Milne. The wings actually began as two broches designed in Paris by Oscar Massin in 1880. It wasn’t until 1935, nearly half a decade later, that the band was made by Cartier in London.

This particular tiara is made of gold and silver and covered in around 2,500 diamonds in total. Only eight of which have been replaced! It was one of the last to be made in this style as the detailed design became less popular after the emergence of the more popular art deco style in the 1930s. It is an incredibly special piece from a private collection, so it has not been worn very often. 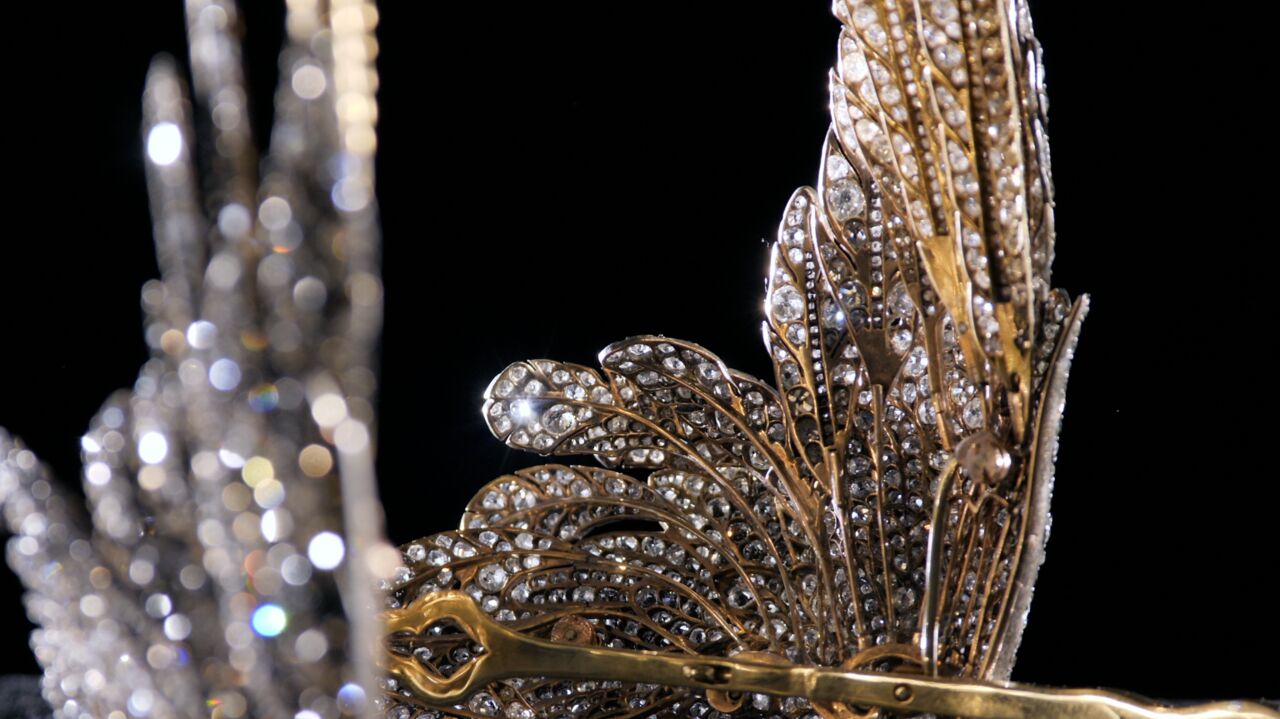 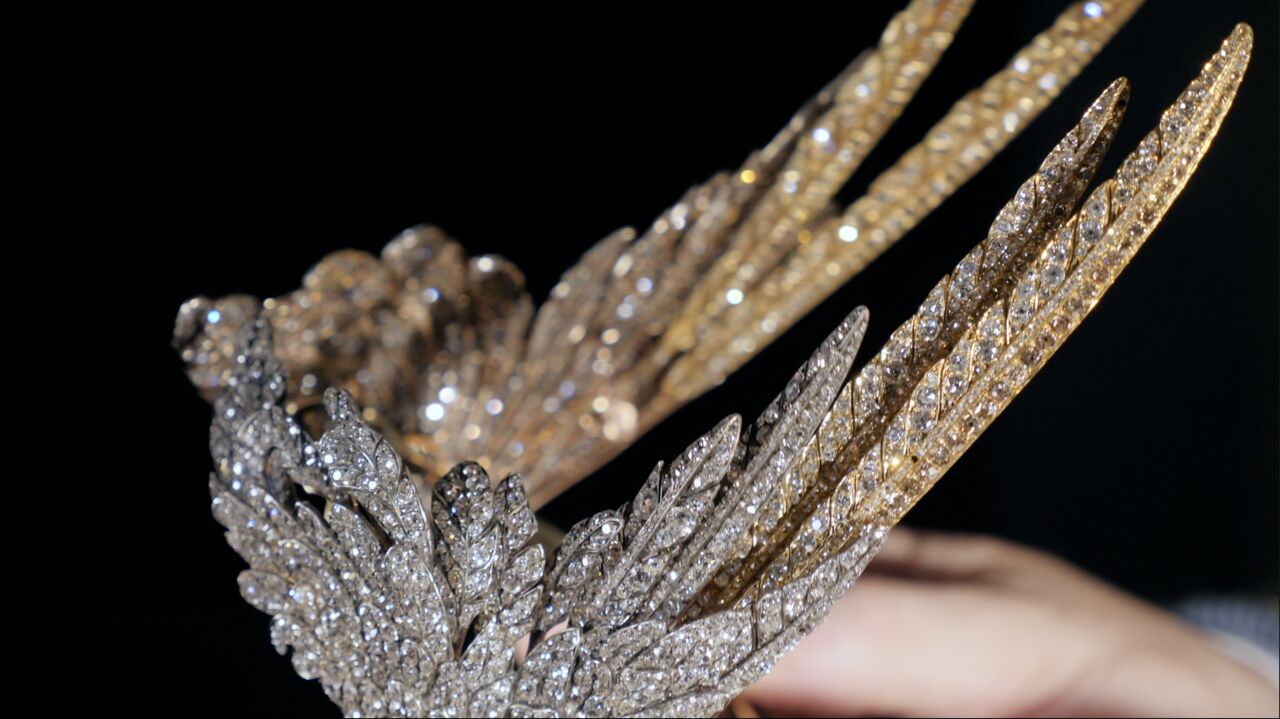 It would have to be a very special occasion to wear such a piece of jewellery. If I owned something like it myself, I’dalmost be too scared to wear it. However, I might just feel brave enough to bring it out at a family wedding. It would make quite a statement!

Sadly, many weddings have been scaled back or cancelled due to the Covid-19 pandemic, so the outfits I bought during lockdown will have to wait. But seeing the tiara in the Scottish Design Galleries reminds me of all the celebrations I still have to look forward to.

This article is part of a collaborative project with Amina MWRC to train local Muslim, Black and Minority Ethnic (BME) women as freelancers to deliver guided tours of our Scottish Design Galleries in both English and their native language.

Farzana was born and brought up in Dundee and has a degree from Abertay University in Business Studies. She is a mother to two young boys and volunteers at the local Kumon Centre.