Open every day
Menu
Close
V&A Dundee
V&A Dundee
Designer Mickey Fenton talked to us about the board's development, and the inspiration provided by V&A Dundee's architecture and 'invisible geometries'

This project came about after my V//ALLIE project for my degree show in 2020. It involved building ramps, obstacles and architectural interventions that helped transform the museum’s external plaza into a more skate-friendly space. I think that project went down really well - it brought a lot of the Dundee skate scene down to the museum and created interactions with the museum that might not have previously existed and I think the V&A team noticed this. There’s a massive potential for skaters to bring new life to spaces (whether they’re desolate and abandoned spaces or brand new developments like the waterfront) and I think this is something the museum may have wanted to transfer into the interior space of the museum.

The V&A shop team reached out and asked if I would be interested in developing some skateboards and I didn’t even have to think before saying yes, it sounded like such a unique and interesting project to be involved with as a new graduate.

"Skaters are always working together to create new things, lending their skills to others and working as a community - it’s part of what has given skating such a richly creative culture - DIY spirit but with community support."

I wanted to take the same themes and inspirations from the previous project and instead of using them to develop spatial objects I wanted to transfer this to the skateboards. The museum’s architecture and the ‘invisible geometries’ found within the architectural and plan drawings of the museum and its environs.

When V&A Dundee reached out about doing the boards my initial thought was to collaborate with someone on producing brand new boards from scratch as I didn’t have the experience in this or a press to press the boards together etc. Instead of investing lots of time and money into doing it myself it made sense to reach out and try to collaborate. I think that’s a running theme across skateboarding anyway. Skaters are always working together to create new things, lending their skills to others and working as a community - it’s part of what has given skating such a richly creative culture I think - DIY spirit but with community support.

The first person that came to mind was Malcolm (Bradley, founder of The Bonny Company) – we studied at DJCAD around the same time and would always bump into each other in the workshops etc. and I had been aware of his developments with the Bonny Co. for a while. The fact that he was Dundee based was a massive advantage as I wanted the project to tap into the local talent Dundee has. I was also really interested in the way that Malcolm is pushing the boundaries with skateboard construction – instead of 7 ply layers of only hard maple, he has 11 layers of maple, vibration dampening cork and hardwood outer veneers. There are more layers but less maple, and the thickness is actually less than a standard board. The cork adds an environmentally sustainable element whilst also providing some cushion for the skater, making a much smoother ride and ideal for cruiser boards. It’s not too often people experiment with board construction and with this happening right here in Dundee it was something I really wanted to work with. 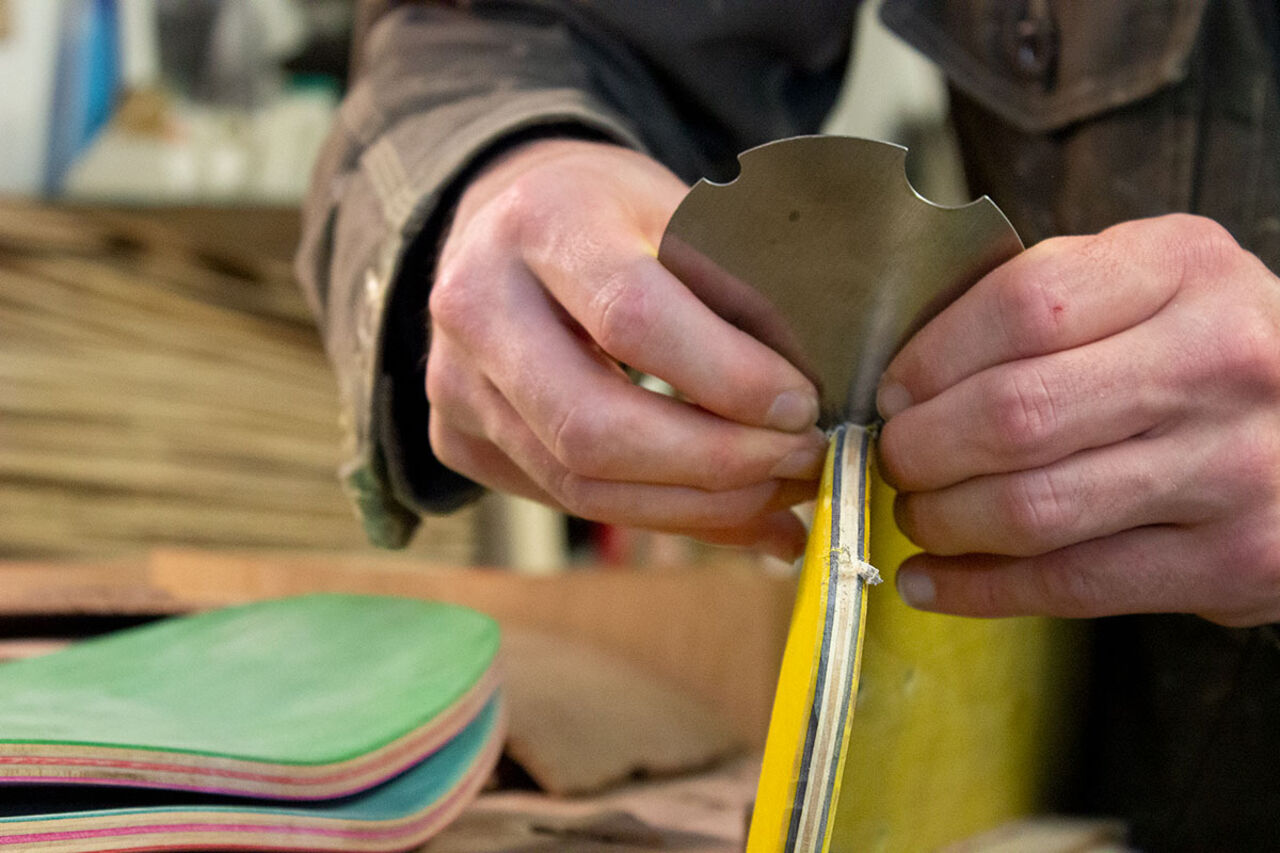 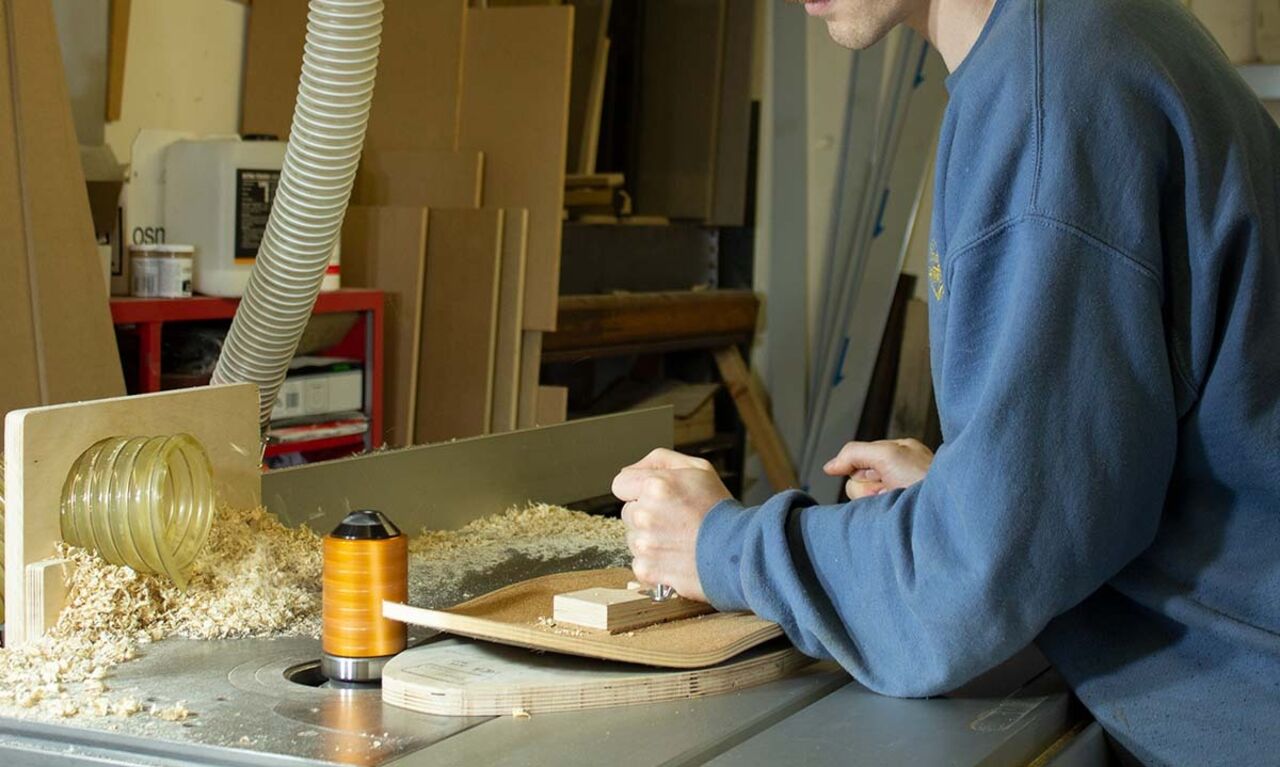 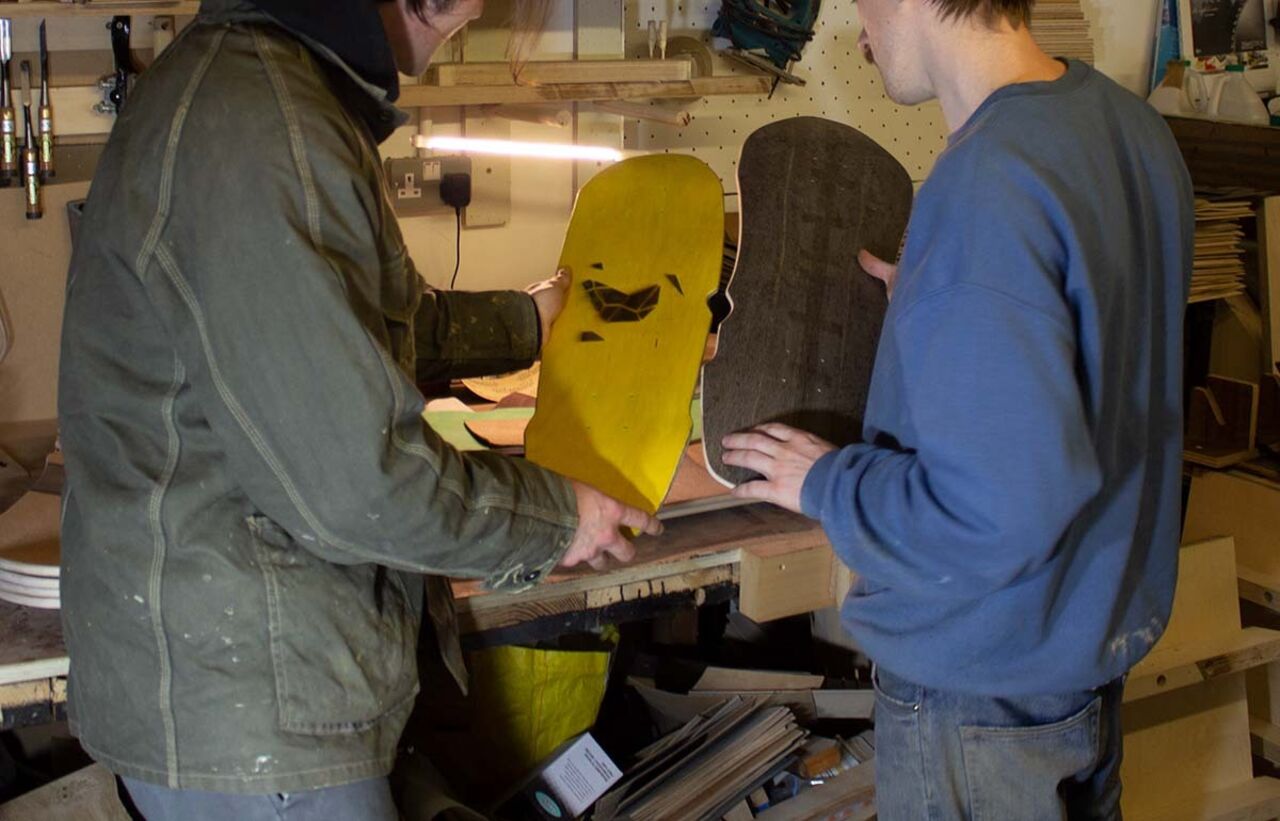 As a designer-maker I was keen to get hands on with some boards as well, and the ‘Recycled Edition’ came to mind as a way to do this. I didn’t need a press to make these boards, just a network of skaters that had old boards laying around that were in decent enough condition but just needing some reviving. The sustainable aspect to this was quite important too; hard maple is such an intensively used material in skateboard manufacturing and quite often there is the potential to make something new with the material instead of just discarding it. By cutting a new shape and sanding back these old decks, you can remove the chips and delamination’s that occur on the edges of the board and bring a new lease of life to them. This was a big reason to involve No Comply Jewellery in the exhibition – finding the potential within the discarded material of old boards to create something new.

"It’s not too often people experiment with board construction and with this happening right here in Dundee it was something I really wanted to work with."

My design process often jumps between sketching, CAD drawing and physical prototyping. I used the shapes and elements I would pull from the museum’s invisible geometries to inform the shape of each board and the graphic on each one. The swooping curves and the cut out arc’s within the shapes of the two boards respond directly to the lines found in the museum and the staggered lines of the blockwork on the building’s façade.

For the graphic on the Bonny Edition I wanted to allude towards the architectural drawing’s of the museum that inspired me and that I worked from to find these ‘invisible geometries’, but to abstract them in a way that suggests the museum’s building without looking exactly like it. For this I would isolate area’s such as the large angular panels of glass on one end of the building and start drawing the shapes I could fine, connecting lines that weren’t explicitly there but could be found if you looked for them. The end result was a collage of three different abstracted perspectives of the museum with some floating shapes at the top and bottom – some of which were hand inlayed with European oak and varied per board to give a hand made feel alongside the CAD aided laser engravings. The laser engraving was something I wanted to use as it’s rarely seen in skateboard design and can work more harmoniously with the pattern and grain of the wood instead of simply screen-printing or heat transferring an image on top of it.

"There is a uniquely raw characteristic to each board and a beauty in the marks documenting the ephemeral movements of skateboarding."

With the Bonny Edition we wanted to reference the materiality of the museum and oak was the obvious choice as it nodded towards the oak interior of the space. ‘Bog’ oak was a nice option to go with – it’s developed through centuries of oak logs sitting in peat bogs and chemically reacting with the oak to give it a really rich and darkened colour. The resulting greyish colour was great as it helped reference the internal oak and the external concrete of the museum. It is also quite a sought after and lavish material and thought this would complement the deluxe offering of the Bonny board. This combined with the laser engraving gave a subdued and elegant finish to the board that compliments the deluxe offering of this piece.

For the graphic on the Recycled Edition I used the same techniques as before but made it a much simpler and bolder graphic, while the bonny graphic is much more subtle to match the bog oak, this board has much more ‘pop’ nature to it that works with the bright colours of the boards. Shapes were pulled and collaged together to mimic larger contours of the museum. The almost mosaic looking pattern on the largest element of the graphic made me think of the broken lines found across the museum’s facades. Additional shapes float around this central pattern and give it a feeling of floating in air – as if they had been physically pulled out from the building and were left suspended.

The material for the ‘Recycled’ edition is quite self-explanatory but helped give a uniqueness to each board. Whilst the Bonny Edition is crafted from scratch and with a pristine finish to each board, these boards came with their own scratches and embellishments embedded within and tell the stories of the previous life they endured as a skateboard. There is a uniquely raw characteristic to each board that is developed by this and, what I believe, a beauty in the marks documenting the ephemeral movements of skateboarding. Alongside this, the colour of the outer veneers is dictated by the original manufacturers, and because of this, each board varies in colour and pattern – giving the new owner a vibrant choice to select from.

The pattern was a combination of hand sketching and CAD drawing, taking the shapes from the invisible geometries and collaging them together in ways that referenced the larger elements of the building.

The Dundee skate scene is still continuing to grow and grow and evolve as a really diverse and inclusive skate scene. The female* (don’t want to be to exclusive with this gender?) skate scene is getting really big and I think it’s amazing to see, alongside organisations such as Queer Skate Dundee are helping shape the overall scene into something that in previous decade’s wouldn’t have existed. It’s this branching out of the sport from something so male dominated and fuelled with testosterone that keeps its fresh and alive, bringing new perspectives, styles and approaches to both the conduct and the tricks within skating.

Last winter the empty, disused space under the Tay Road Bridge was reappropriated by the skate scene in a similar way to that of the V&A, skaters in hunt of the only dry skate space to use in the wet winter. Myself and a few others began discussions with the Tay Road Bridge Board to establish this space as a truly skate friendly spot that is much needed in the city. We are beginning to grow our group and look for new committee members and supporters, alongside look for support from establishments in the city that can give us some leverage (such as V&A Dundee!).

I think skating has so much to offer the waterfront development. It’s such a community based activity and brings so much life to spaces that you wouldn’t expect it from. With all the commercial development on the waterfront it’s important that there’s still exciting and forward thinking public spaces that have the ability to facilitate the coming together of a diverse range of people, and I don’t think there are many sports/activities that do this as well as skating. This doesn’t mean creating skateparks that have no use for non-skaters, but creating multi-use spaces that have skateboarding in mind.

Now that V&A Dundee have shown their interest and commitment to Dundee skateboarding through this project it would be fantastic for the museum to show their support for more skate friendly spaces on both the waterfront and wider Dundee and to express the societal and cultural benefits that can come from this.