While it’s probably not the first thing you think of when considering videogames as a design-medium, in 2015 user ‘MrSquishy’ recreated the 1980s classic Pac-Man within Minecraft, replicating everything from the sounds of the original arcade cabinet to its custom colours and textures. A videogame player built one pre-existing game within another pre-existing videogame. Just for fun.

What, you might be asking, is the point of spending days, weeks or even years, making something just to amuse yourself and other players? The answer is not as simple as you think and requires an introduction to the world of videogame ‘modding’, a term born into the videogames of the 1980s and still a creative means of game-altering and game-based practice today.

In the context of videogames, modding or mods are best understood as new experiences or outcomes within games that are a product of a series of user-made modifications (hence the term), which include the process of altering, appropriating, adding to and deleting elements of an existing videogame.

This is often done using tools that are not part of the original ‘vanilla’ version of the game and stem from the users (in this context, most often players) and not from game-design professionals (not that they’d admit to doing it as part of their paid day-job.) In most cases, modifications are neither authorised nor intended by the game manufacturers, although occasionally they are. Deleting code or features from games is often part of modding, as is adding custom textures, new features or environment packages, as well altering the landscape of a game for other players to experience.

One of the first games to ever be fully modified in this way was Castle Wolfenstein, a game written by Silas Warner at Muse Software for the Apple II and Commodore 64 back in the ‘80s. Castle Smurfenstein was a parody version of the game, where the Nazi characters of the original were switched out for Smurfs, with altered voices and environments to match. 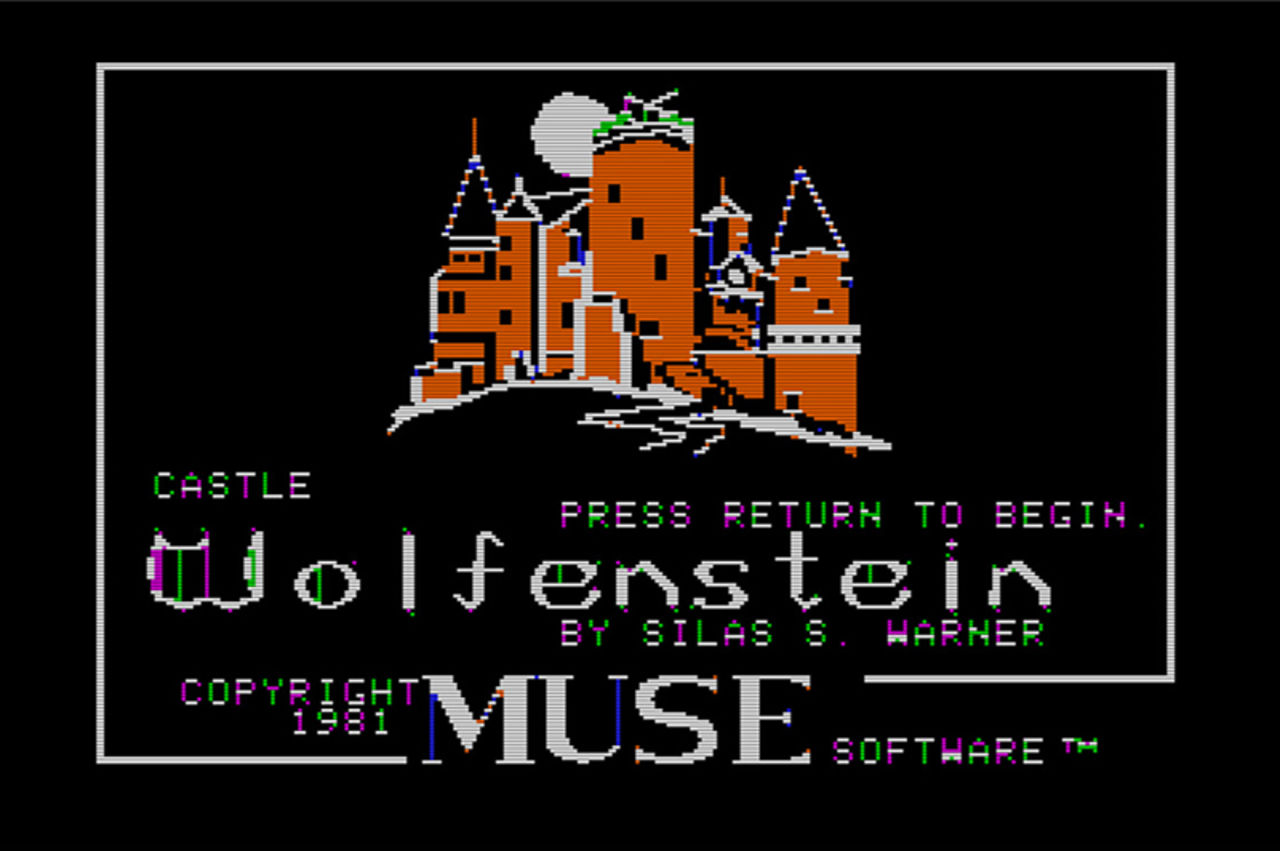 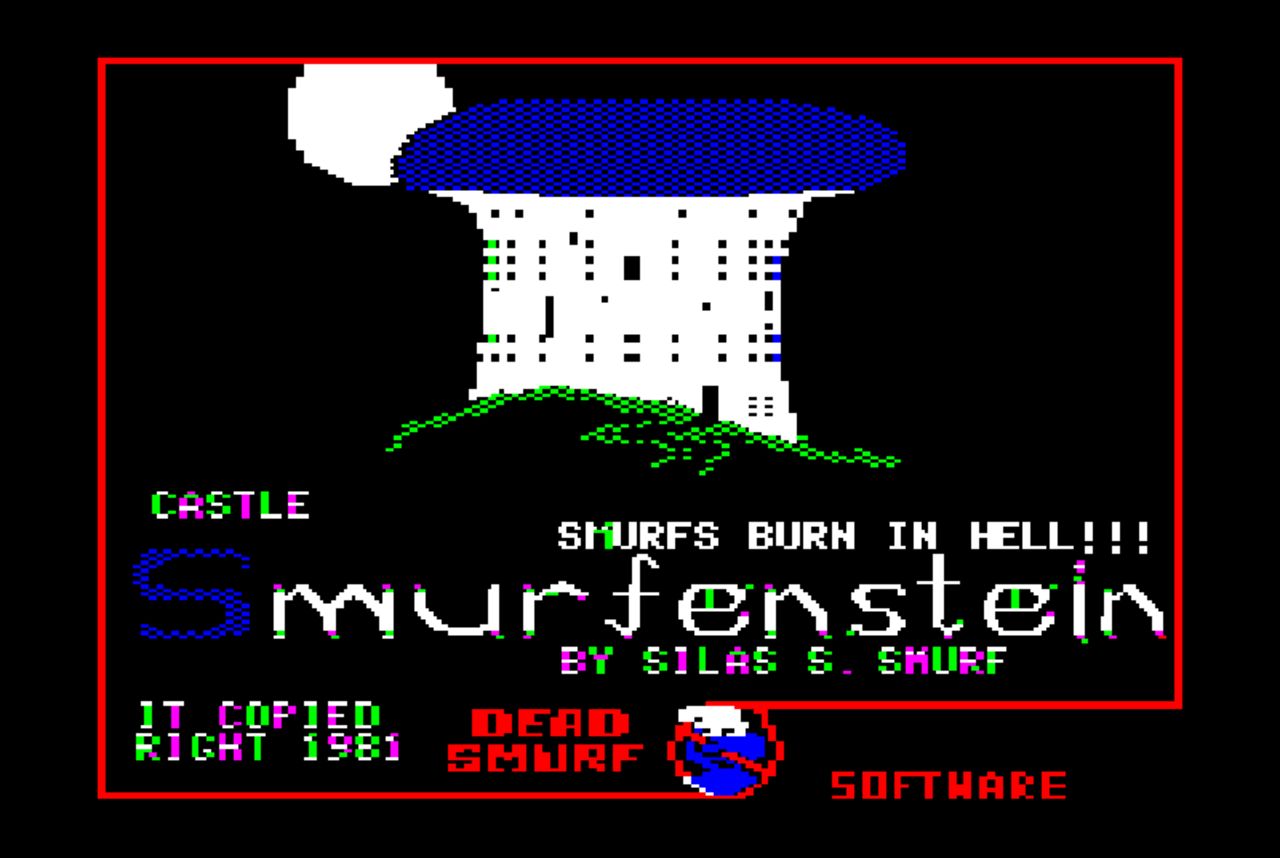 The players responsible for editing the game (Andrew Johnson and Preston Nevins) needed only a paint program, a sector editor and Muse's very own 'the Voice' software to add in the new audio to the game. Nazis of the original game clearly just weren’t that nefarious to a suburban high-school kid in the early 80s. Smurfs, though? They were the real threat.

An instant hit amongst game-players, Castle Smurfenstein ushered a whole raft of in-game modifications and add-ins created by the people playing the games themselves. Sometimes they were silly, throw-away joke versions of the game; other times they spawned whole new game genres and entirely new videogames, separate to the original, modded game.

In 1993 the founders of id Software, Tom Hall and John Carmack, were so keenly aware that fans of their previous game, Wolfenstein 3D, had attempted to make their own modifications to the game that they decided to package up the maps from their new game Doom for players to modify. This resulted in players creating whole new game-levels for themselves and is recognised as one of the first recorded instances of a custom package being offered up to players to alter the game as they wished.

This spawned a whole new sub-genre of players creating new secret levels within games and pushed modding into a space where it was taken seriously. Videogames could be drastically altered, by the players themselves, into new and expansive universes for others to enjoy.

This in turn led to a whole raft of games such as Counter-Strike, League of Legends, GTA V, Petz, The Sims and Skyrim being made open (at least in some format or another, and not always officially) for players to create a more personal game-play experience to share with others. Skyrim in particular is recognised as having outlived its original release date, because the modding community has kept the game alive online by continually updating the player experience in a way that keeps it fresh.

Eventually, some players no longer modified games for their own pleasure or to share, but to compete with each other and create the best or most-enhanced versions of a game. Sometimes, in the case of Skyrim and League of Legends, this meant whole new offshoot games played by millions. Some modders even get themselves game-development jobs with studios based on the technical and design skills they demonstrated modding these existing games.

This brings us back full circle to the Pac-Man arcade created in Minecraft. Minecraft is one of the most easily modded games out there; aside from the more code-heavy modifications players can make, the very style and function of the game itself makes it easy to be modified by novices. This is because the game functions like a series of building blocks in which you create and design your world for yourself, like playing virtual Lego.

MrSquishy’s Pac-Mac arcade is a good example of this: it didn’t require much technical know-how, just lots (and lots) of time and effort. MrSquishy used pre-existing elements within the game and one custom pack of textures to provide sounds and colours to recreate the Pac Man aesthetic. The rest is built using the existing structures of the game. It’s amazing that MrSquishy managed to build a complete and working virtual arcade cabinet within the confines of another game’s mechanics, especially without any prior formal programming experience.

MrSquishy is not the only one modding Minecraft to change the way it’s played and experienced. In our Videogames exhibition, the ‘Players_Online’ section contains a short film which details a few of the mind-bending in-game modifications people have created within Minecraft. Players have built everything from complete versions of the Westeros Universe to the Starship Enterprise, as well as secret tunnels and layers you jump through to reach new portals within the game.

My personal favourite (albeit a slightly more technical mod using custom code) is JurassiCraft. This mod is based on the Jurassic Park franchise and allows you to create dinosaurs by extracting DNA from fossils and amber and then putting them through a laboratory process until you get a baby dinosaur.

This mod doesn’t just pull dinosaurs into Minecraft, it also adds prehistoric plants, fossils, dinosaur skeletons, cars and various Jurassic Park-themed decorative elements that make the game unmistakably feel like the world we’ve seen in the films. This is another example of a game (or film in this case) within a game and an incredibly creative use of a few simple elements.

What can be hard to appreciate in all of this is the time and dedication it takes for players to undertake these custom mods: the hours spent getting the colours and textures of something just right. The sense of community it builds amongst players is powerful. People sharing new code-based tweaks they have made or uploading videos to YouTube and Twitch for others to critique once they have finalised their amazing creations.

Among all the crazy creations, perhaps the most exciting element of modding is the creative outlet it gives players to share and build things together. Making entirely new worlds and game-play experiences for their friends and the wider videogame community to enjoy, one (Minecraft) brick at a time.

Lauren Bassam is an Assistant Curator at V&A Dundee.