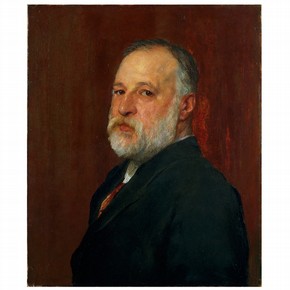 Constantine Alexander Ionides and his bequest to the V&A

In 1815 Constantine Ipliktzis came to England with a view to exporting Manchester cloth to Greece and Turkey. He came with not much more than a motto given to him by his father in his will: never spend more than a third of your income; give away a third in charity and save a third.

His son Alexander settled in Manchester in 1827 changing his name to Ionides (Ion was the mythical ancestor of the Ionians, therefore Ionides means 'the Greek') and founded the firm of Ionides and Co. His business prospered and he moved first to Tulse Hill, South London and then in 1864 to 1 Holland Park. Alexander became an art patron and a friend of several noted artists, such as Whistler and Rossetti. His first private commission was to G.F. Watts to paint from the original the portrait of Alexander Ionides’s father, Constantine by Samuel Lane. He went on to paint five generations of the Ionides family.

Constantine Alexander Ionides
Constantine Alexander Ionides was the eldest son of Alexander Constantine Ionides. He was born on 14 May 1833 and died at Brighton on 29 June 1900 and is buried at the Hove cemetery. At the age of 17 he entered his father’s business in Manchester, and five years later represented his father’s firm in the grain trade in Romania. At 27 he married Agathonike Fenerli in Constantinople and they went on to have eight children together. He moved to 8 Holland Villas Road on Lord Holland’s Estate in Northern Kensington not far from 1 Holland Park where his parents moved in the same year. In 1864 Constantine entered the London Stock Exchange and by 1866 had started up his own business with a partner called Barker as stock and share brokers in the City, continuing successfully as Ionides & Ionides and Ionides Constantine. In 1882 Constantine retired from active business having amassed a considerable fortune. In 1884 he bought a house in Hove, East Sussex, and by the early 1890s was living there permanently with his art collection. Not much is known of Constantine as a person; his son tells us that he was an autocrat in the home, known by his children as 'O Zeus'.

Constantine Ionides’ art collection
The collection formed by Constantine Ionides includes works of a wide variety of schools, periods and artists, such as Old Masters, 17th-century works, contemporary British works and French 19th-century works. Constantine formed friendships with artists of the day, in particular with Alphonse Legros (1837–1911). Constantine proved a stable and generous buyer of Legros' work, and in turn Legros became his advisor in the matters of art. Under the influence of Legros, Constantine developed a keen interest in French 19th-century paintings, purchasing works by Delacroix, Degas, Millet and Rousseau.

Constantine’s plans for his collection ran more towards the idea of benefitting the general public than did those of his father or brother. He decided to donate his collection to the Victoria & Albert Museum instead of privately distributing it or disposing of it at auction. His will states:

'All my pictures both in oil and water colors and crayon or colored chalks (but subject as to my family portraits to the interest herein before given to my said Wife) and all my etchings drawings and engravings to the South Kensington Museum for the benefit of the nation to be kept there as one separate collection to be called "The Constantine Alexander Ionides Collection" and not distributed over the Museum or lent for exhibition. And I desire that the said Etchings Drawings and Engravings shall be framed and glazed by and at the expense of the authorities of the Museum so that Students there can easily see them.'

The collection bequeathed to the Museum in 1901 comprises 1138 pictures, drawing, and prints, to which a further 20 items were added on the death of his widow in 1920. The works are listed in the V&A Catalogue of the Constantine Alexander Ionides Collection.

Information in the V&A Archive

To locate material in the National Art Library, please search the Library Catalogue