An introduction to gemmology

Gem material is of a varied nature and includes both inorganic and organic substances from natural and synthetic crystals to, for example, pearls, corals, jet and ivory.

At the Victoria and Albert Museum, gem material is found not only in jewellery, but as inlay in wood or stone, or set in decorative metalwork and carved as objects in their own right. Some of the gem materials, however, have never been professionally assessed and may have been labelled incorrectly, if labelled at all. Others, for example those in the chalcedony group (agate, onyx, carnelian, sard), rely on a system of nomenclature which is often confusing and has changed over time. There is a need for specialist identification which can be costly, and in the past the Museum has often had to rely on the voluntary help of (eminent) external specialists.

In 2001, the V&A provided funding for the author to study for the Diploma in Gemmology –the study of gem material -at The Gemmological Association and Gem Testing Laboratory of Great Britain, London (Gem-A). Theory and practical examinations were successfully completed in March 2003 resulting in the Fellowship of the Gemmological Association (FGA). The Gem-A Diploma syllabus is extensive and covers the formation and mining and recovery methods, the chemical and physical nature of gem material, the nature and manufacture of synthetics and simulants, the fashioning of gemstones, treatment and enhancement methods, and of course, identification techniques.

Gem material is first examined visually (with or without magnification), to determine colour and colour effects, level of transparency, surface condition (wear/fracture/indications of cleavage/polish), lustre, inclusions (features within the material), quality of cut/polish, and level of refractivity (by viewing facet edges through the gem). 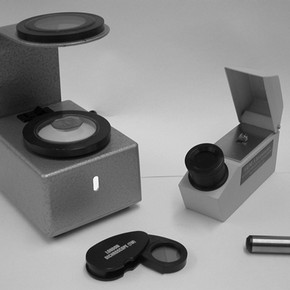 As gemstones display a variety of physical and optical constants these may be assessed with a number of instruments (Figure. 1). The method chosen depends on accessibility (restrictive mounts and settings), the nature of the gem material, and the resources available. The identity of a gemstone should ideally be confirmed with a minimum of two methods. The majority of instruments used to support identification rely on the nature of interaction between gem material and visible light, and as such are non-destructive:

Visible light passes through and/or is reflected by gems. The refractometer relies on the principal that each gem species has a characteristic angle of ‘total internal reflection’. The refractometer is used to measure the refractive index (RI) of a gemstone and also provides further information about the crystal structure.

As visible light passes through, or is reflected by material, specific groups of wavelengths are absorbed and the remaining light is interpreted by the eye as colour. This feature is utilised by the spectroscope, a small hand-held instrument which splits light into its constituent colours in the form of a spectrum from red to violet. Characteristic absorption spectrum patterns are created when viewing some gemstones, and these may be diagnostic.

If a gemstone is doubly refractive (anisotropic), light which enters the gemstone passes along two different routes. This may result in two or more colours as the light exits the gemstone. The  resultant light is generally interpreted by the eye as a single colour, though this colour may vary slightly depending on the direction of view. A dichroscope separates the light on exit from the stone into its constituent colours. For example, a ruby will clearly display two colours: pink-red and orangish-red (a natural crystal will usually be cut so that what is thought to be the best colour, pink-red, is most noticeable when viewed from above); whereas a red spinel, commonly mistaken for ruby, is only singly refractive and so will only ever display one colour.

Shadow patterns revealed when turning a gemstone on the table of a polariscope indicate the crystal structure of transparent and translucent gem material. In some cases diagnostic patterns may be viewed. For example, quartz usually displays a highly indicative ‘bulls eye’ pattern along the optic axis.

SG is a figure which represents the relative density of a material, it is expressed as a ratio of the weight of a substance to the weight of an equal volume of water. This figure can be obtained by weighing an object in air and then in water and using a simple formula. The SG can only be calculated from un-mounted gem material, and is particularly useful for small carvings. 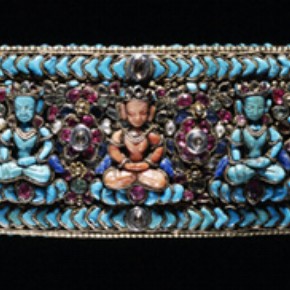 Visible light occupies a small fraction of the electromagnetic spectrum.In a gem testing laboratory, various parts of the whole spectrum may be used to aid identification.For example X-rays are used to provide radiograph images which differentiate between materials such as natural and cultured pearls and can reveal some treatments such as glass fills in diamonds; Infrared (IR) energy is used in infrared spectrometers such as the Fourier Transform Infrared spectrometer (FTIR) which is similar in principal to the spectroscope for visible light, but analyses infrared wavelengths rather than visible light wavelengths. FTIR can be used to identify plastics, oils and waxes, and resin-based materials such as amber.

The Raman microprobe is a spectrometer equipped with a microscope and an IR, visible light or UV laser illuminator. It was first used in gem laboratories in the 1990s and relies on the development of a database of spectra for each gemstone species 1 . Raman is particularly useful to conclusively identify gem materials in settings which restrict the use of conventional instruments; to identify inclusions, which may help to provide an opinion on the geographical origin of a natural gemstone; and to identify artificially introduced materials such as oils and waxes.

Applications of gem material examination at the Museum 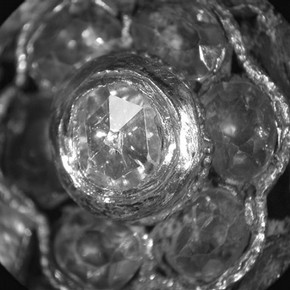 Figure 2b. Detail of a rose cut diamond from the head ornament showing a ‘trigon’. Photography by Joanna Whalley (click image for larger version)

Gem material has been identified and ‘Gem Material Reports’ produced which are provided for curators, fellow conservators and members of the public. The information is used for records, labels, and may affect treatment considerations, as is the case for materials which have been impregnated with a wax or oil and/or are artificially coloured, composite, or are particularly sensitive, such as opal or amber.

Fifty items of jewellery were examined and the gemstones identified for John Clarke’s forthcoming V&A publication on Himalayan jewellery 2  (Figures 2 a & b). This provided a unique opportunity to look at setting methods from this region -many of the gems are backed with foil and coloured resins which enhance colour and in many cases provide the only means of attachment. It also provided an overview of the gem materials employed: the great variety of cutting styles and possible gem localities in each item of jewellery suggested a number of differing gemstone provenances.

The gem materials of three objects included in the V&A’s major exhibition 'Gothic: Art for England 1400-1547' were identified. The resulting information has been used for exhibition labels. Among these is the Ape Salt, on loan from New College, Oxford (Figure 3). The eyes of the ape are set with translucent pinkish red gems, and the ape supports a transparent, colourless hemisphere. These materials had not been formally identified as far as is known, and had been thought to be glass and rock crystal respectively. The use of a spectroscope and a dichroscope confirmed that the pinkish red gems are rubies; observation of inclusions and use of the polariscope prove that the hemisphere is, in fact, glass. 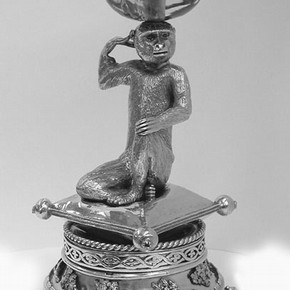 The Gilbert Bayes Sculpture Gallery is currently being developed as a gallery dedicated to the materials and techniques of sculpture production. Approximately 65 cameos and intaglios in a variety of gem materials are to be displayed. The majority of these objects are made of polycrystalline quartz (chalcedonies and jaspers) in its differing forms. Classification of these materials has been historically inconsistent. However, a comprehensive system of nomenclature was introduced by Margaret Sax, with help from Christopher Cavey, Alan Jobbins and Gertrude Seidmann, for the British Museum's seals 3 . The system relies on colour and colour banding; for example if a chalcedony is brown, it is called sard, however if there are distinct curved bands of other colours within it, the material will be called agate, if the bands are straight, it may be called an onyx ('sardonyx'). The cameos and intaglios for the Gallery are to be examined and re-classified if appropriate.
The analytical work so far has been demanding and incredibly enjoyable, and with other projects to come including a supporting role in the redisplay of the Jewellery Gallery, the future holds many new and exciting challenges.
I am grateful to the Victoria and Albert Museum for giving me the opportunity to attend this course. Thanks to the Metalwork Department, particularly to Richard Edgcumbe and Clare Phillips, for their continued support and encouragement; and I am indebted to Nigel Israel, Chairman of the Society of Jewellery Historians, for allowing himself to be adopted as my unofficial mentor.

1 Lucia Burgio, Objects Analysis Scientist at the V&A has conducted a short-term practical study into the use of Raman spectroscopy in the Museum. As part of this study, a database of spectra was developed using gems sourced by the author, and this database was used to identify gems on four items of Himalayan jewellery. (V&A Science Dept.report No 03/37/LB).

2 Clarke, J. (Curator, Asian Department, V&A) Jewellery of Tibet and the Himalayas. Due for publication in July 2004.

For anyone with an interest in Gemmology, the Gem-A website is worth a visit at gem-a.co.uk.

The following books offer a good foundation for the study of gemmology: