The New Paintings Galleries at the V&A have just opened to the public as I write. I still can’t quite believe it and find myself going to check that I haven’t dreamt it. The practical conservation of the paintings started exactly a year ago in November 2002. One hundred and sixty-seven of the 200 oil paintings on display required some work and we had just under one year in which to complete it. I am reminded that the building originally built to house many of the same paintings was also completed in a year – it was opened by Queen Victoria in 1857 -and the galleries that have just been refurbished are a part of that original building.

Most of the paintings were previously on display but many had not been seen out of their frames for a long time. Condition assessments were carried out on all the paintings in the previous galleries as well as several in store. After the design for the hang had been agreed we made a further assessment, in consultation with the Head Curator of Paintings, Mark Evans, of which paintings we would select for more extensive treatment. With limited time available we wanted to identify those paintings where time spent would make the most difference to their appearance and, at the same time, ensure that they were also a priority from the curatorial point of view. Katharine Donaldson, the frames conservator, went through the same process of assessment, discussion and prioritising.

The majority of the paintings were examined out of their frames,and checked for any signs of deterioration. At the same time as documenting their condition, we made a note of any interesting technical art historical information. A number of paintings had been treated by my predecessors in the recent past and, therefore, there was no need for any further treatment although colour transparencies were taken, which meant un-framing and re-framing. Minor treatment procedures were carried out on the majority of the paintings such as the removal of surface dirt, the mending of small tears and occasionally the consolidation of loose paint. The paintings were photographed before being refitted into their frames. Progress on the conservation of the frames naturally mirrored the work on the paintings. Low reflective glass was fitted in the 111 frames that did not already have it. 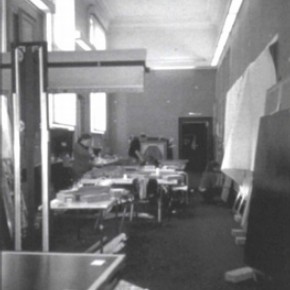 Figure 1. The team at work in the temporary studio in the former Paintings Galleries. Photography by Nicola Costaras (click image for larger version)

With the closure of the former Paintings Galleries in June we were able to turn several galleries into temporary studio space. This enabled us to work more efficiently where a large number of paintings and frames needed a small amount of work individually and meant that the new low-reflective glass could be ordered in batches. Racking on the walls of the galleries provided storage space for the paintings that were ready to be hung (Figure 1).

Apart from the practical conservation of the paintings, we were also involved in designing interactives for the galleries and in writing articles for the website. For one of the interactives, Joe Padfield from the National Gallery used his digital image-processing skills to help us create a series of images corresponding to the layers of an oil painting - support, ground, underdrawing and paint layers. Printed on separate sheets of acetate, the images can be stacked on top of one another in order to convey the idea of a painting as a three-dimensional structure.

The initial examination of the small number of paintings that were selected for more extensive treatment threw up some interesting questions that merited further investigation. Viewed through the microscope it was apparent that an underlying paint layer had oozed up through the drying cracks in the surface paint layer of Corot ’s 'Twilight: landscape with tall trees and female figure' (CAI.65). On the left side this paint was a bright pink. Having the advantage of x-ray facilities in-house, we were soon able to see from the x-radiograph that Corot had made substantial alterations to his original composition. The pink paint was from a house now completely concealed. Because the underlying paint was still wet while the surface paint had dried, drying cracks formed in the upper layer.

During the course of the project colleagues from the Van Gogh Museum, the Statens Museum, Copenhagen, the Instituut Collectie Nederland, the Philadelphia Museum and the Fogg Art Museum came to examine paintings while they were in the studio. We contacted colleagues with a special interest in either a particular artist ’s work or in specific phenomena such as the protrusions that have recently been discovered in oil paintings. These protrusions were first analysed in the Netherlands when tiny craters on the paint surface and spheres of transparent material within the paint were noted during the conservation of 'The Anatomy Lesson of Dr Tulp' by Rembrandt. The spheres analysed thus far contain lead soaps and they are the subject of continuing research at ICN and Mol Art in Amsterdam. We found similar protrusions on two paintings: 'L ’Immensité' by Courbet (1869) and 'Le Pont de Batignies' by Rousseau which was of great interest to the researchers.

During the course of the project almost every section in the Conservation Department was involved in one way or another. One gallery is dedicated to works of art on paper and there are ceramic, metalwork, sculpture and furniture objects on display. The Science Section advised on the glass, filters and case materials and continues to be involved in environmental monitoring of the galleries. 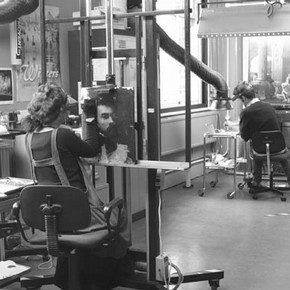 In addition to one full-time paintings conservator, and one full-time frames conservator, Katharine Donaldson (and during her absence Zoë Allen), the conservation team consisted of two paintings conservators on one-year contracts, Devi Ormond and Adam Webster (Figure 2), three frames conservators: Kristina Young, Barbara Dabrowa and Sarah East on four, eight and three month contracts respectively, and two interns Rita Bachmayer and Béatrice Villemin – the former for six months and the latter for four months. A generous sponsor funded a five month contract for the conservation and restoration of two paintings by Turner, which was undertaken by Jim Dimond.

Although with fierce time constraints, the project was a wonderful opportunity to work with great colleagues, to examine a large number of paintings from the collection, to make new discoveries and to contribute to other research projects even if there was no time to investigate further ourselves. We noted several paintings with underdrawing that it would be interesting to record in the future. The large number of unlined canvases in the collection in excellent condition will also be of interest for future study of nineteenth century materials and techniques. The highlight for everyone working in the paintings studio was seeing the transformation of the two Turners as successive layers of extremely discoloured varnish were removed. It is a great pleasure for me to see the paintings in their original setting within the V&A. The galleries are a tribute to the large number of people who worked on them.