Open daily except Tuesday
Menu
Close
V&A Dundee
V&A Dundee
Our show ‘Now Accepting Contactless’ explores the design response to the pandemic and how design can help us find a path through this new reality. Studio de Pass Montgomery created a beautiful exhibition design for us. We asked them a few questions about their process.

What was your role in the design of the show?

We were initially invited by V&A Dundee to create a graphic scheme for the exhibition. As the project evolved, we took on the 3D exhibition design too. Working on both meant we could approach the project holistically and make sure the 2D and 3D schemes were integrated successfully.

You designed our Hello, Robot. show last year. How was this different?

The timescale for a start! Now Accepting Contactless was curated, designed and fabricated in just ten weeks during lockdown. It’s a response to what is happening right now. The museum felt that it was important for them to reopen with an exhibition acknowledging the impact of the pandemic and celebrating the role of designers in helping to tackle it.

The exhibition also sits in a different space from Hello, Robot., running through the heart of the museum. It starts at the entrance foyer with the first sections sitting where the ground floor café would normally be (closed as part of the museum's social distancing measures) and then continues on the first floor through the Michelin Design Gallery and beyond. 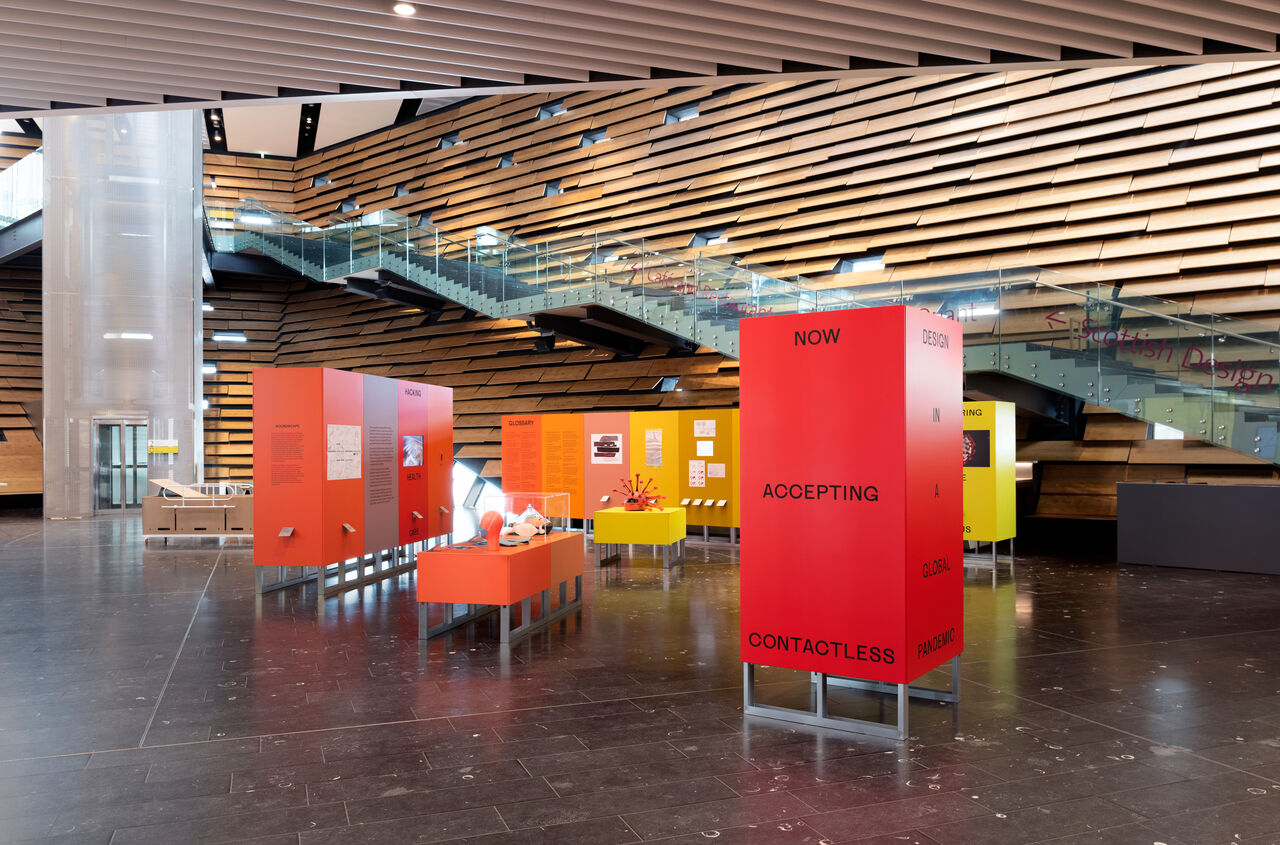 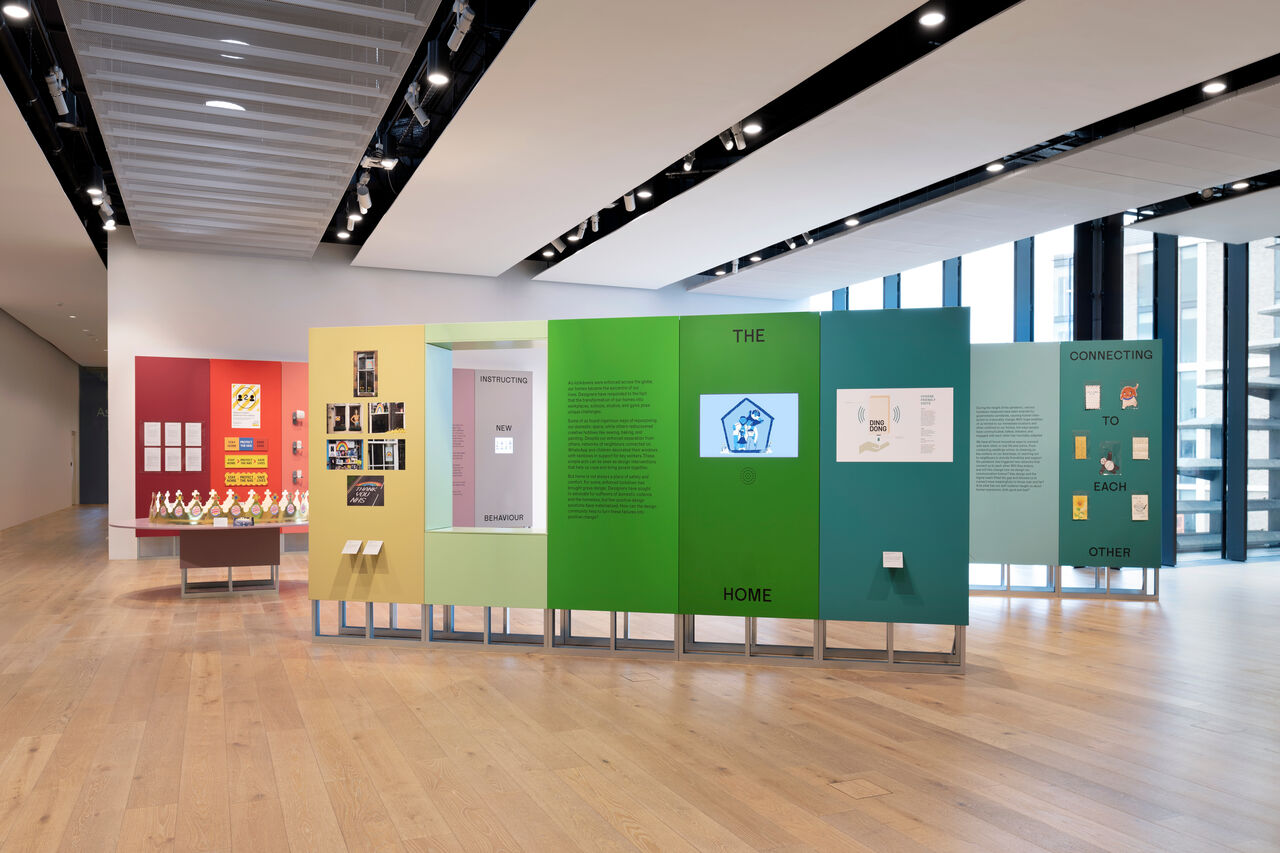 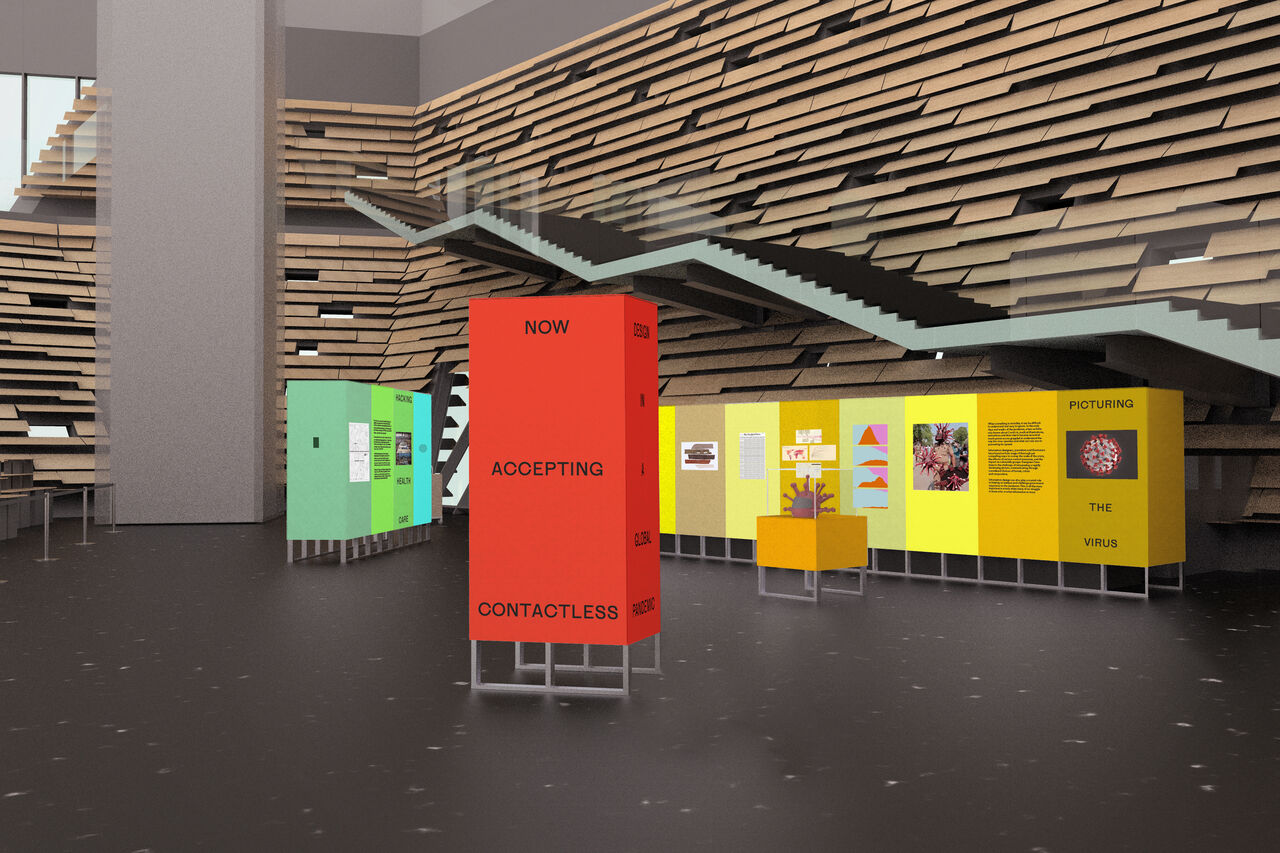 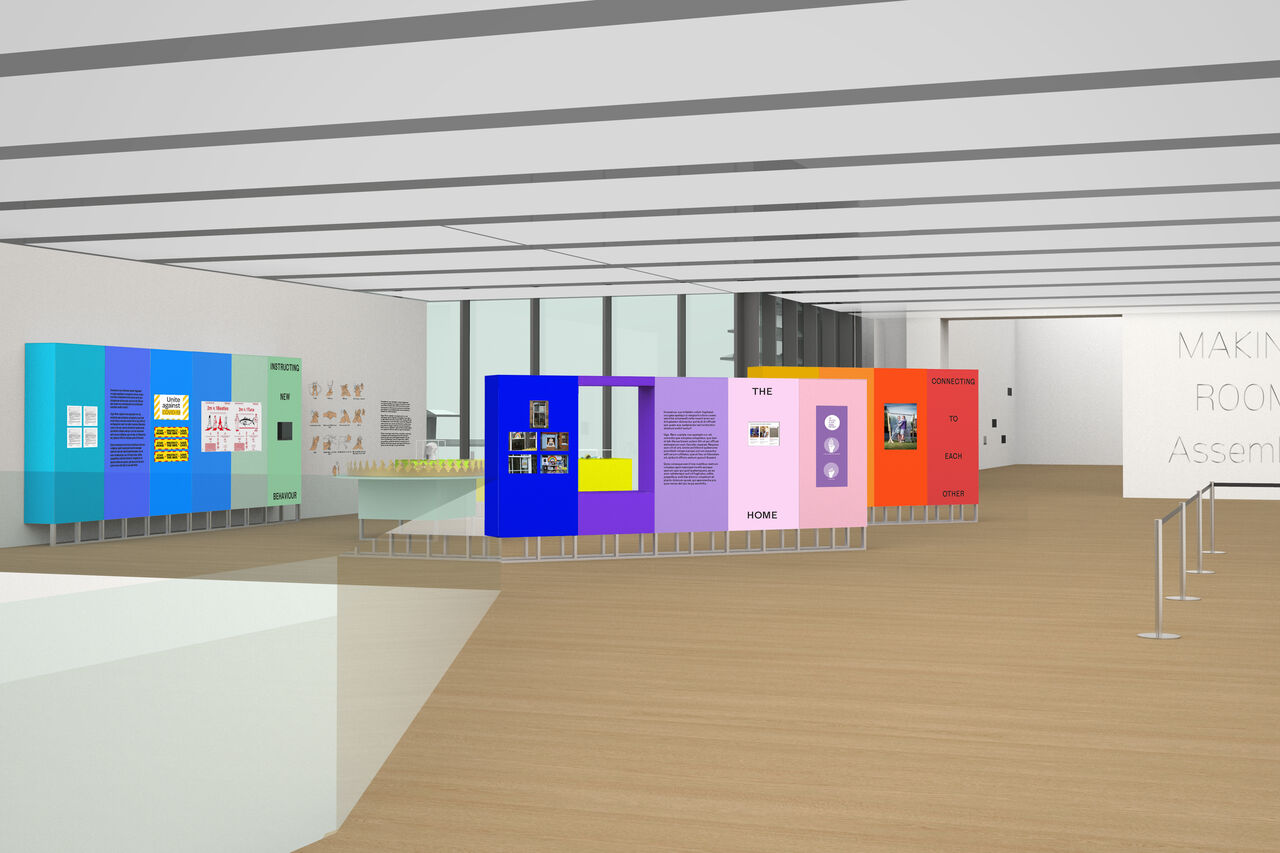 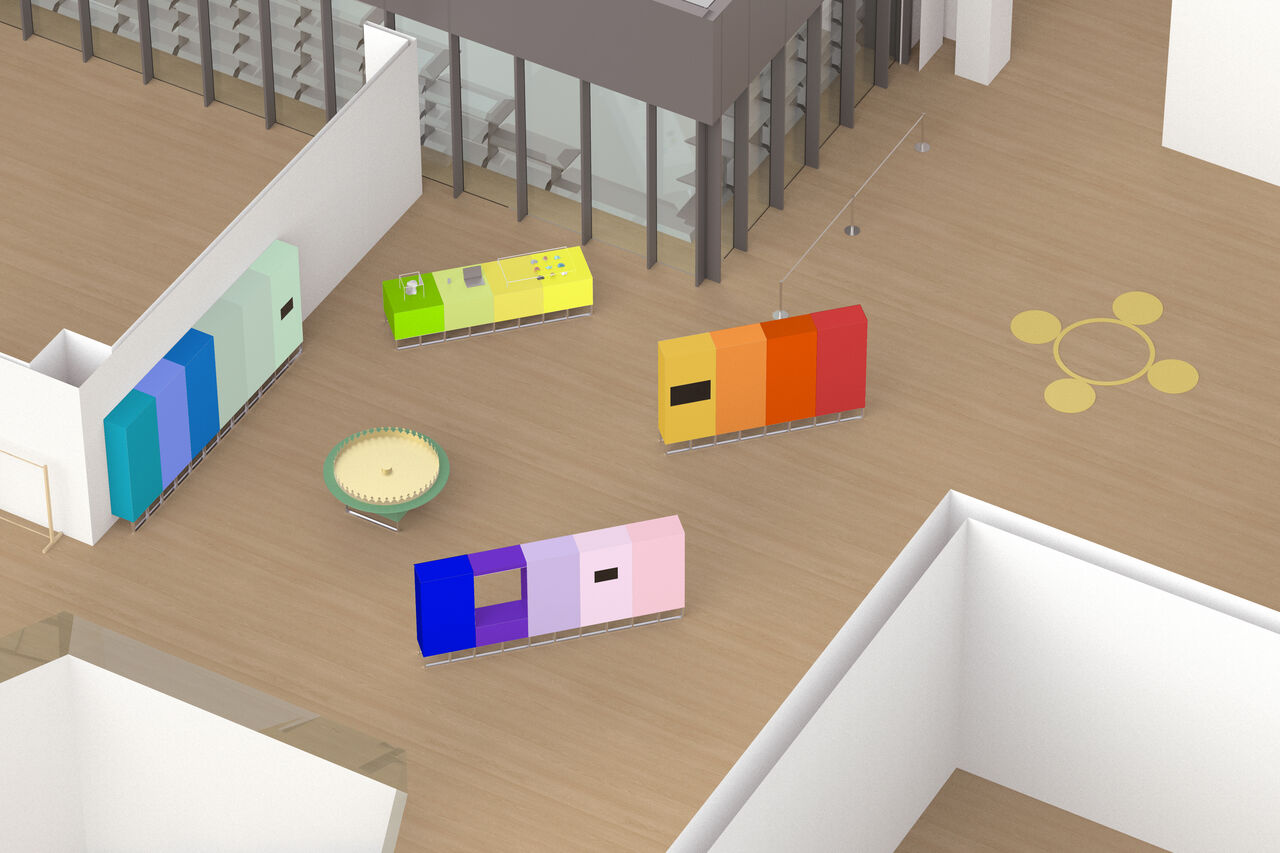 What was your starting point when designing Now Accepting Contactless?

How can we create a positive experience that lives up to the excitement of reopening the museum but at the same time is sensitive to the impact the pandemic has had on many of the museum's visitors? It was a tricky balance to get right!

Can you talk us through some of the key approaches of your design?

The main concept was to create a physical rainbow. A rainbow as a mark of hope, positivity and thanks became one of the most recognisable graphic symbols used by the public during the height of the pandemic.

We felt using a rainbow palette would help achieve a positivity and vibrancy that visitors would recognise and understand. A helpful coincidence was that the curators had already chosen to divide the content into 7 themes, which meant there would be one theme for each colour of the rainbow.

The fast-paced nature of the project also meant we needed a structure that was easy to position objects in while being flexible to last-minute changes. The exhibition furniture consists of entirely 1-meter wide modular units, each individually coloured. Each one holds a single story, and the meter width also gives guidance to visitors to help social distancing. 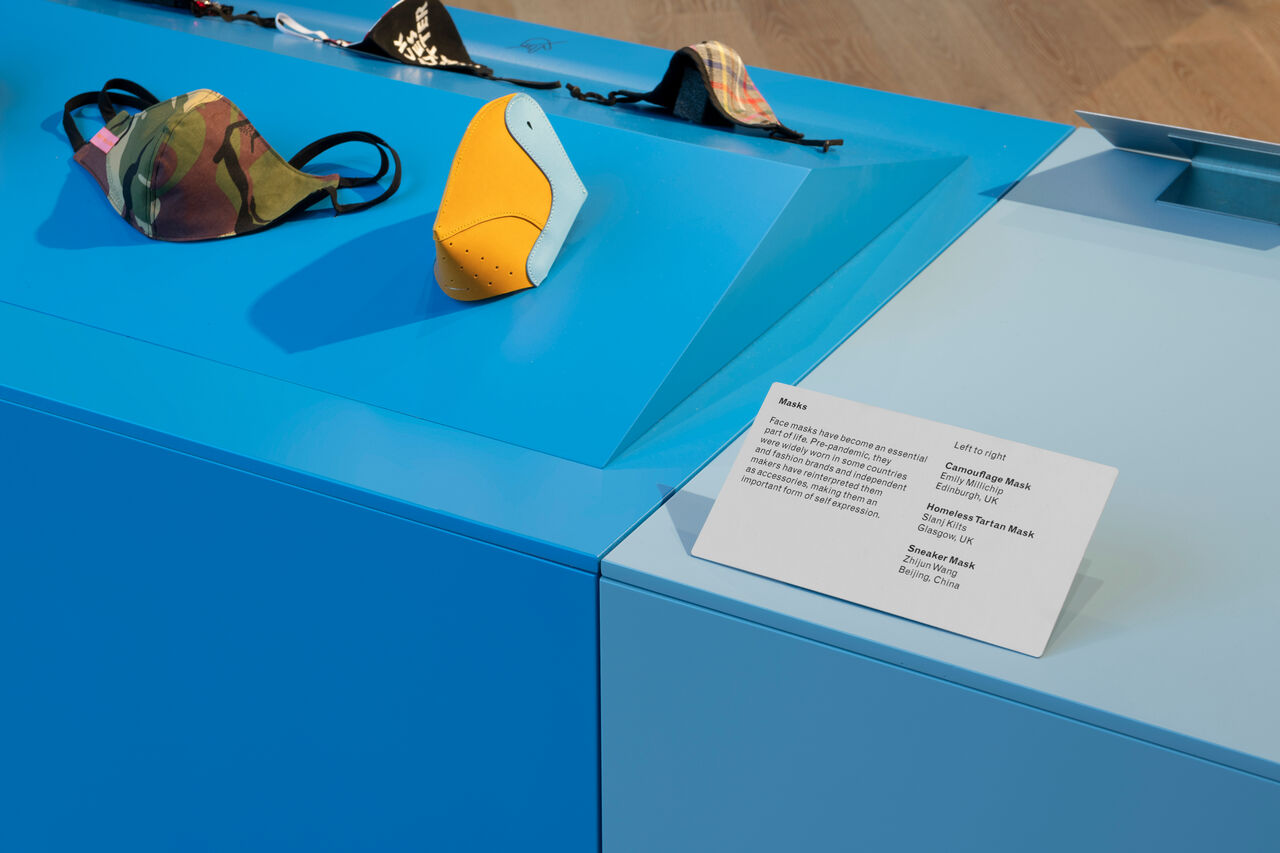 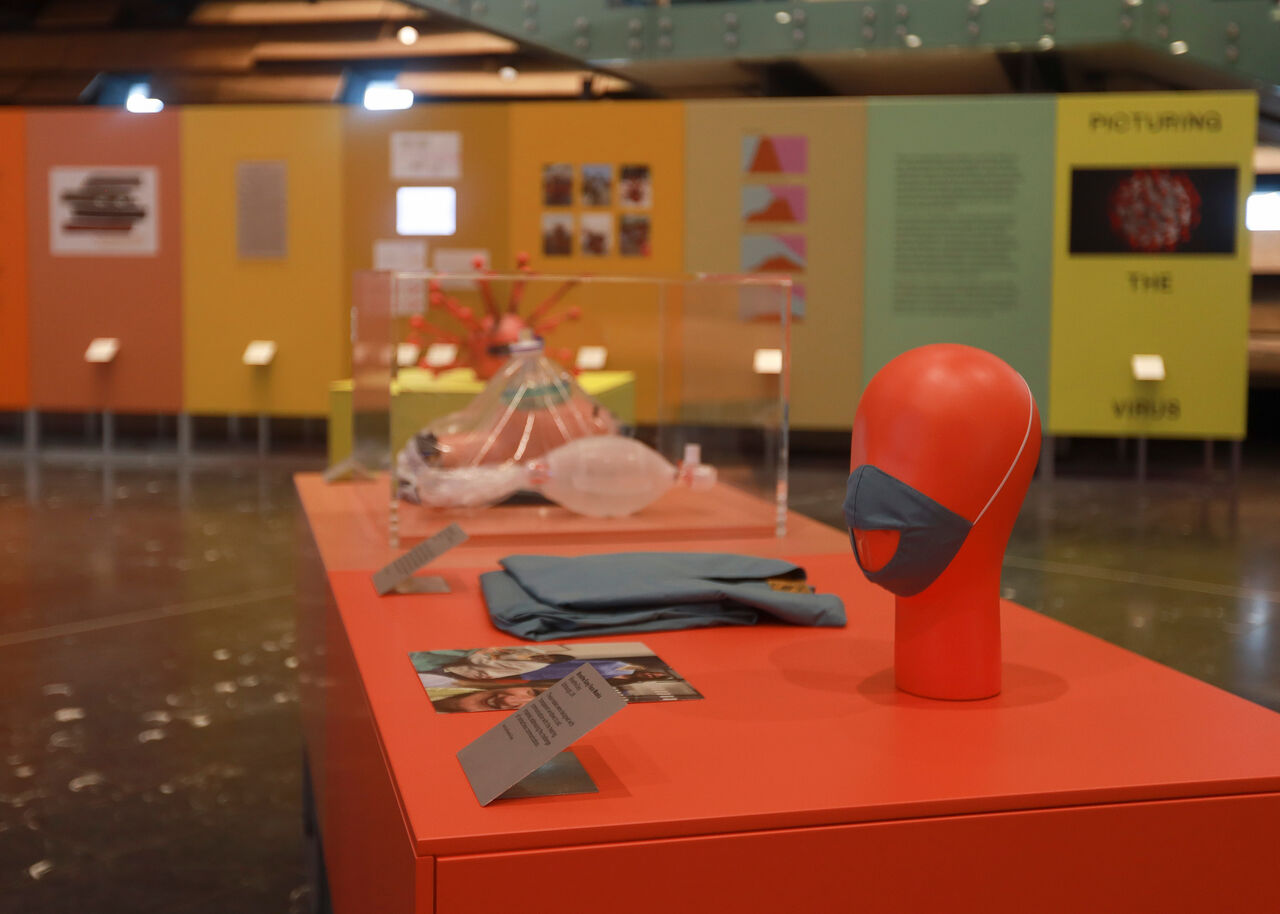 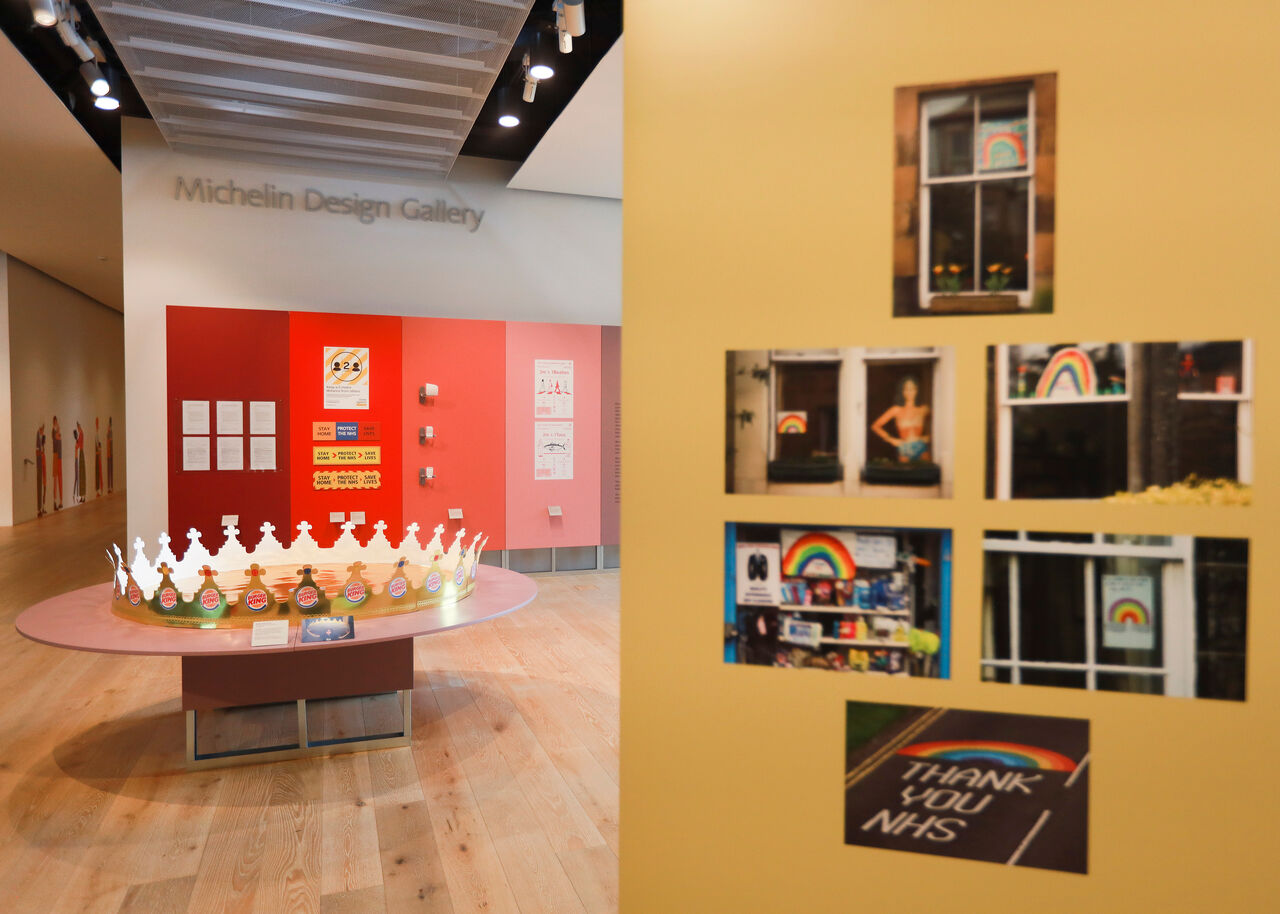 How did you adapt or riff off of the rainbow-inspired palette?

We didn't want a conventional candy coloured rainbow. We wanted to explore colour combinations that diverted from a gradient and interacted with each other in interesting ways.

We approached artist and colour consultant Sophie Smallhorn to create the palette based on this brief. Sophie has worked in this way for clients such as Comme de Garçon, London 2012 Olympics and Cos, so brought her experience in how to use bold colours in a confident and considered way.

When "deconstructing" the rainbow, what considerations did you have in mind?

It was important to us that the colour was applied to the exhibition panels by spraying pure mixed paints rather than digital printing or vinyl. The latter production methods don’t have the same vibrant punch. But to stay within budget we had to be clever in how we limited the number of paints we used.

Sophie advised on repeating the first and last colour of each section of exhibition. This created a bridge between each section and cleverly limited the number of colours in a way that isn't obvious. Some colours were also repeated between floors. The effect is that it appears that every panel is different when actually there are 24 colours...which is still quite a lot! 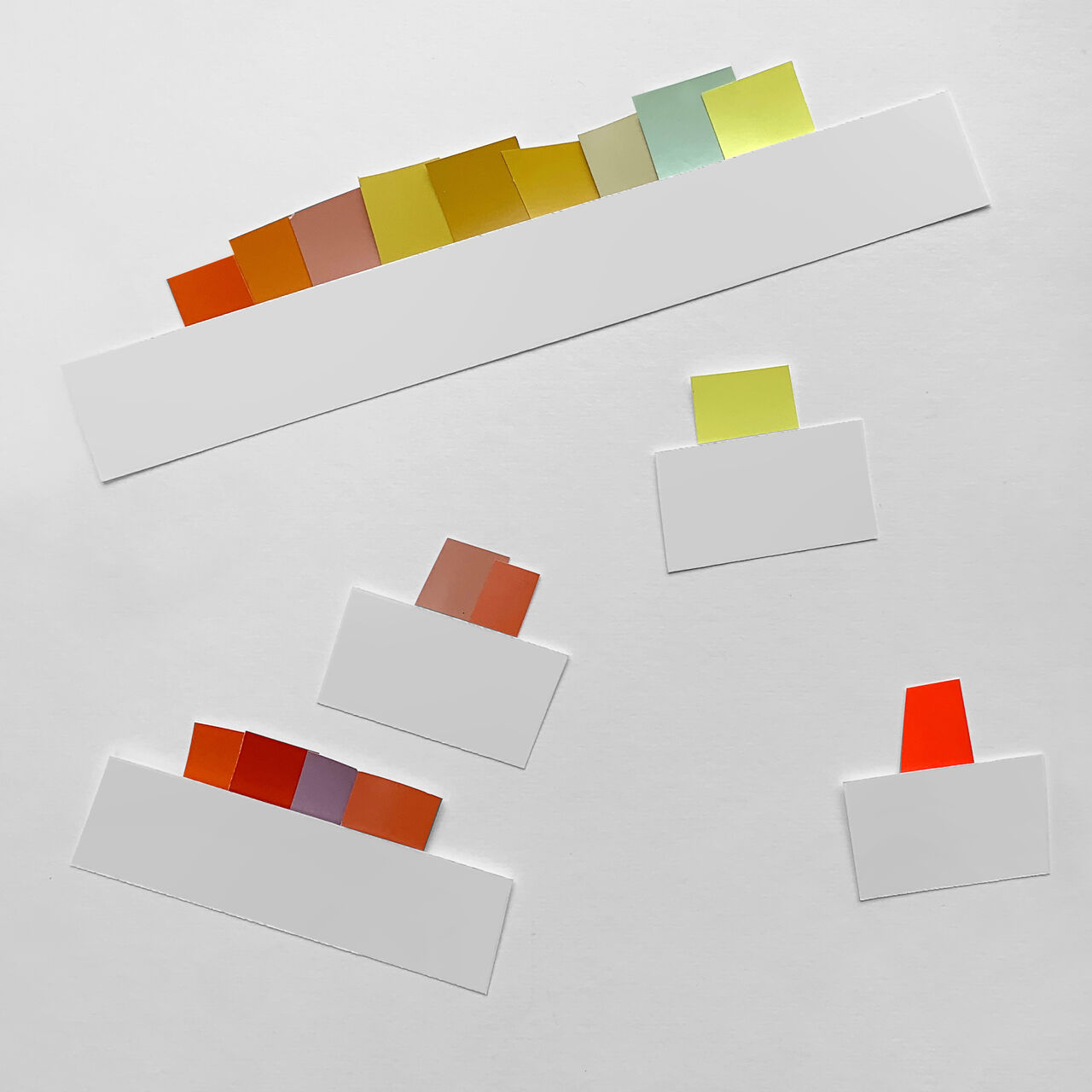 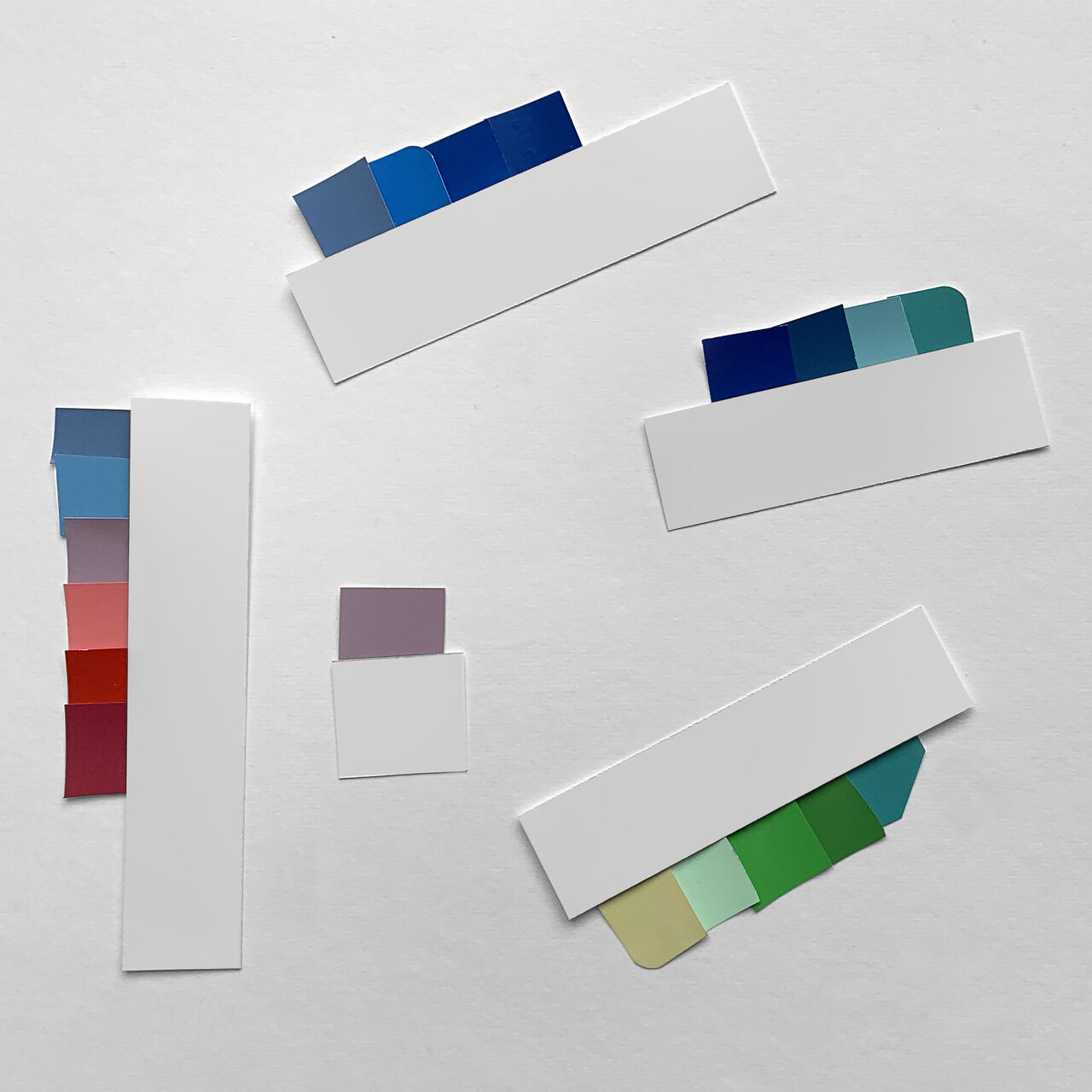 What was the thinking behind the large, almost monolithic, plinths and cases?

The scale of the space the exhibition sits in warranted a significant physical installation. It was important that it had an impact within the volume of space. We also wanted the modular units to feel like they referenced temporary forms that might be found in environments where simple structures have to be built quickly, such as in the Nightingale hospital (which itself features in the show). 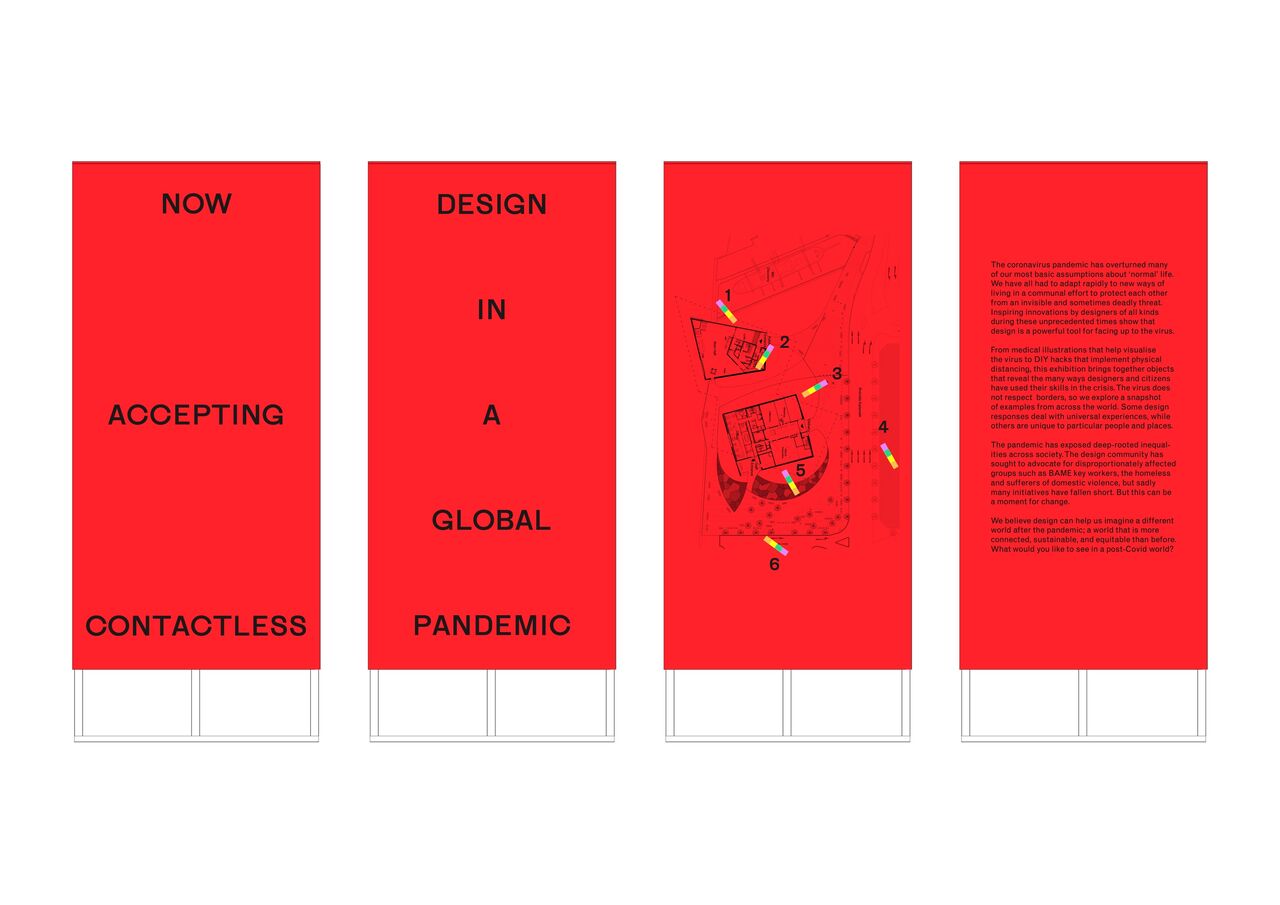 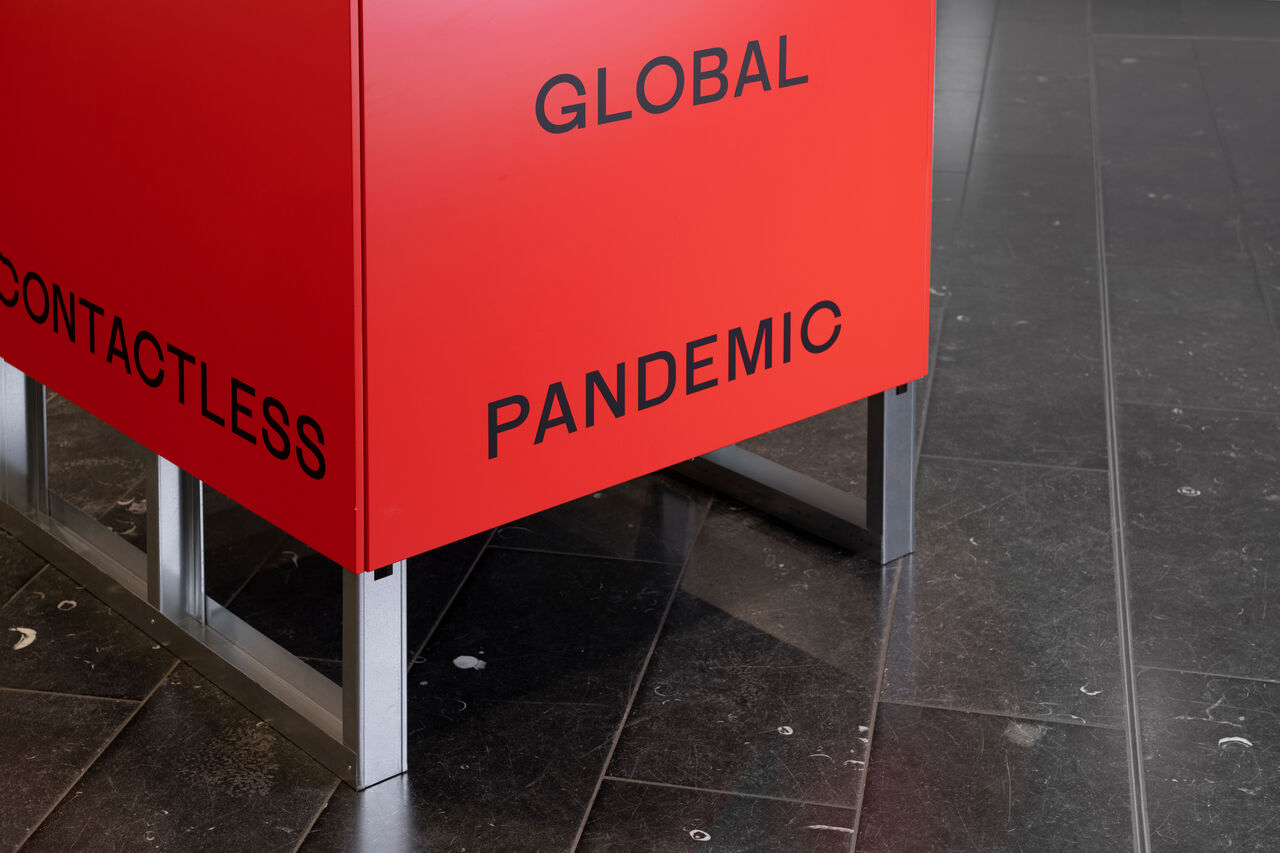 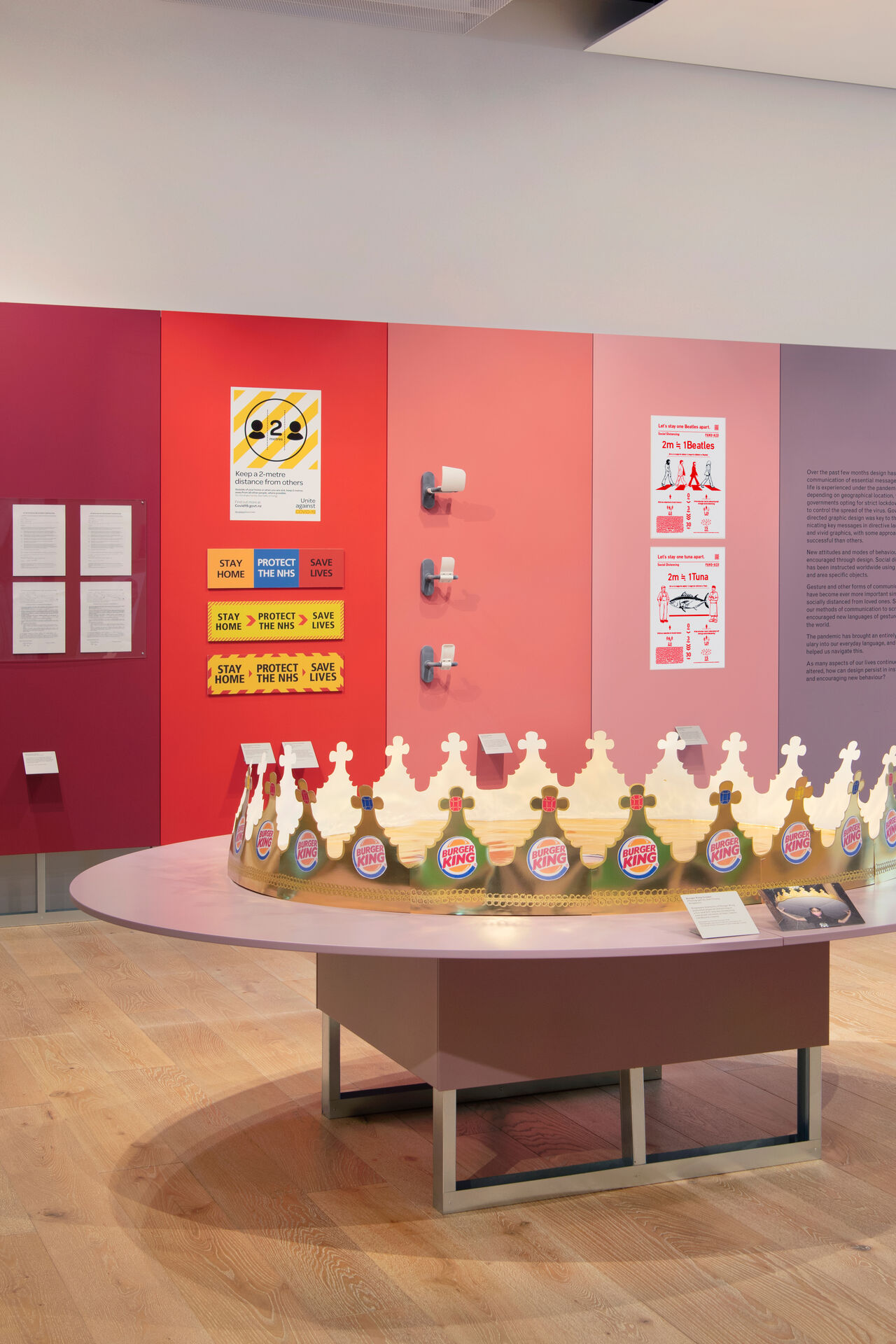 Can you talk us through the typographic approach?

The title of the show Now Accepting Contactless felt like it needed a direct typographic response. We split the words up so they appear to be socially distancing from each other.

We used a typeface that has recently been drawn by typographic foundry Or Type. It is based on a digitisation of wooden letterpress from Glasgow School of Art's Caseroom and has been developed with guidance from Edwin Pickstone (Lecturer, Typography Technician and Designer in Residence at Glasgow School of Art).

The titles of each section are stacked vertically on a single panel with exhibition objects often fitting within the spaces created between the words.

The local and global narrative changed during the design for the show, how did you react to a continually changing environment?

The exhibition was always going to be a snapshot in time. It opened just after the first wave of cases had subsided and lockdowns eased. That was the first opportunity to reflect on the efforts made to tackle the pandemic during a time when it was least understood and when we were least prepared.

Although there is more to the narrative of the pandemic to come, the exhibition still captures an important moment to focus on. The curators went to great lengths to ensure that the exhibition included voices from all over the world.

Objects were sourced in such a short timescale and digital objects were often easiest to get hold of. Still, a number of original 3D objects were sent to the museum from different parts of the world in record time. When this was not possible, facsimiles were created to represent the original objects faithfully.

The show opened during the pandemic which is still going on. Were the social distancing measures and other behavioural changes related to the pandemic pivotal to the design of the show?

We had to make sure that social distancing of 2m was possible at all parts of the visitor journey. The modular unit of 1m gives visitors some guidance to help with this.

The sprayed paint finish was also chosen because it is easy to wipe down and clean. It was not possible to include exhibits that require touch or interactivity, so objects such as apps and websites were displayed as a video loop instead.

What is your favourite object in the show?

The snorkelling mask that has been adapted to be used as a C-PAP mask is a great example of how designers and engineers have made an immediate impact to help people infected with the virus.