Open Thu - Mon
Menu
Close
V&A Dundee
V&A Dundee
Adding colour and style to our streets and winding alleyways, Open/Close Dundee has provided vibrancy, drama and a reason to explore some of the less-visited areas of the city. Russell, the person behind the project, tells us how it all started.

I’ve always loved street art, but it was a visit to Aalborg in Denmark that kick-started the idea for Open/Close. I went on an amazing mural trail there that took me all over the city, leading me to explore areas I probably wouldn’t have otherwise. The creators of the trail say it’s meant to be like a treasure hunt, and that murals are in hidden areas which will surprise you. I really liked that.

Aalborg is comparable in size to Dundee and is easily walkable so I thought something similar could work here. I initially wanted to do gable ends all over Dundee, which would have been very ambitious to start things off. I’ve since learned that large murals are very tricky and time- consuming to organise. It was at Fleet Collective - a creative co-working space where I rented a desk - that things got started. I chatted to Katie Guthrie there (a street artist and designer who goes by the name KMG) who advised me to scale down a bit and start off with doors, much like the Aberdeen Painted Doors project. 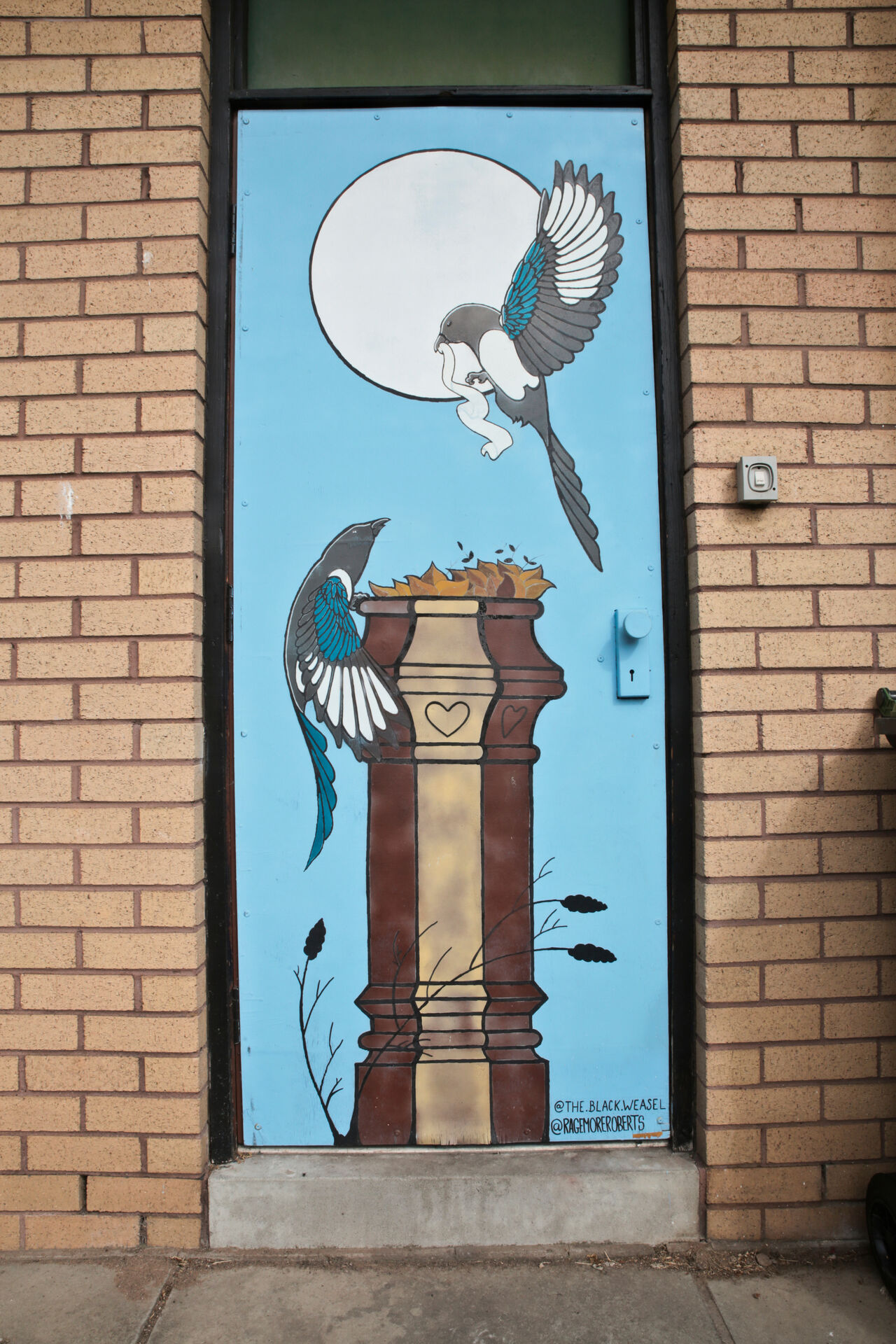 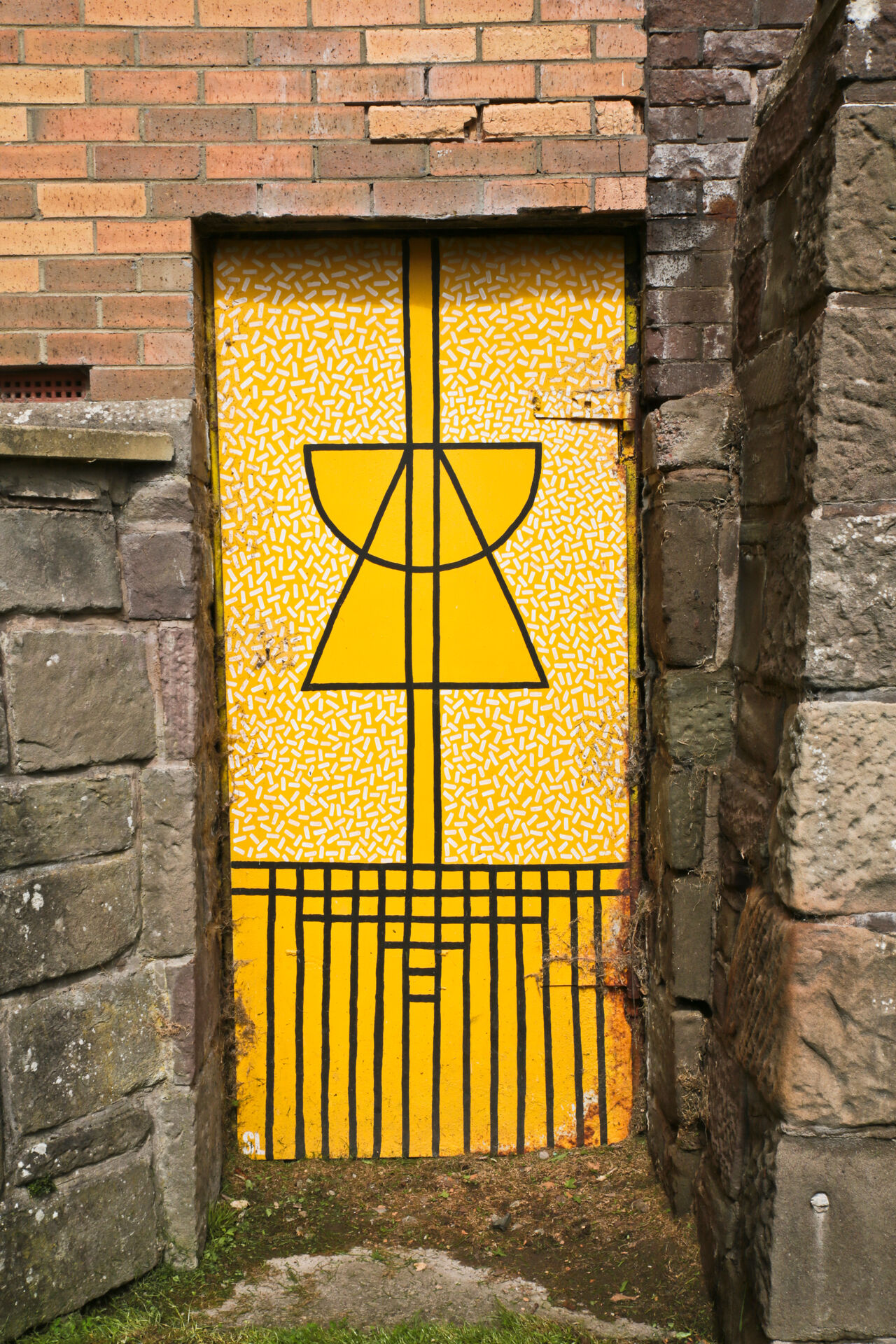 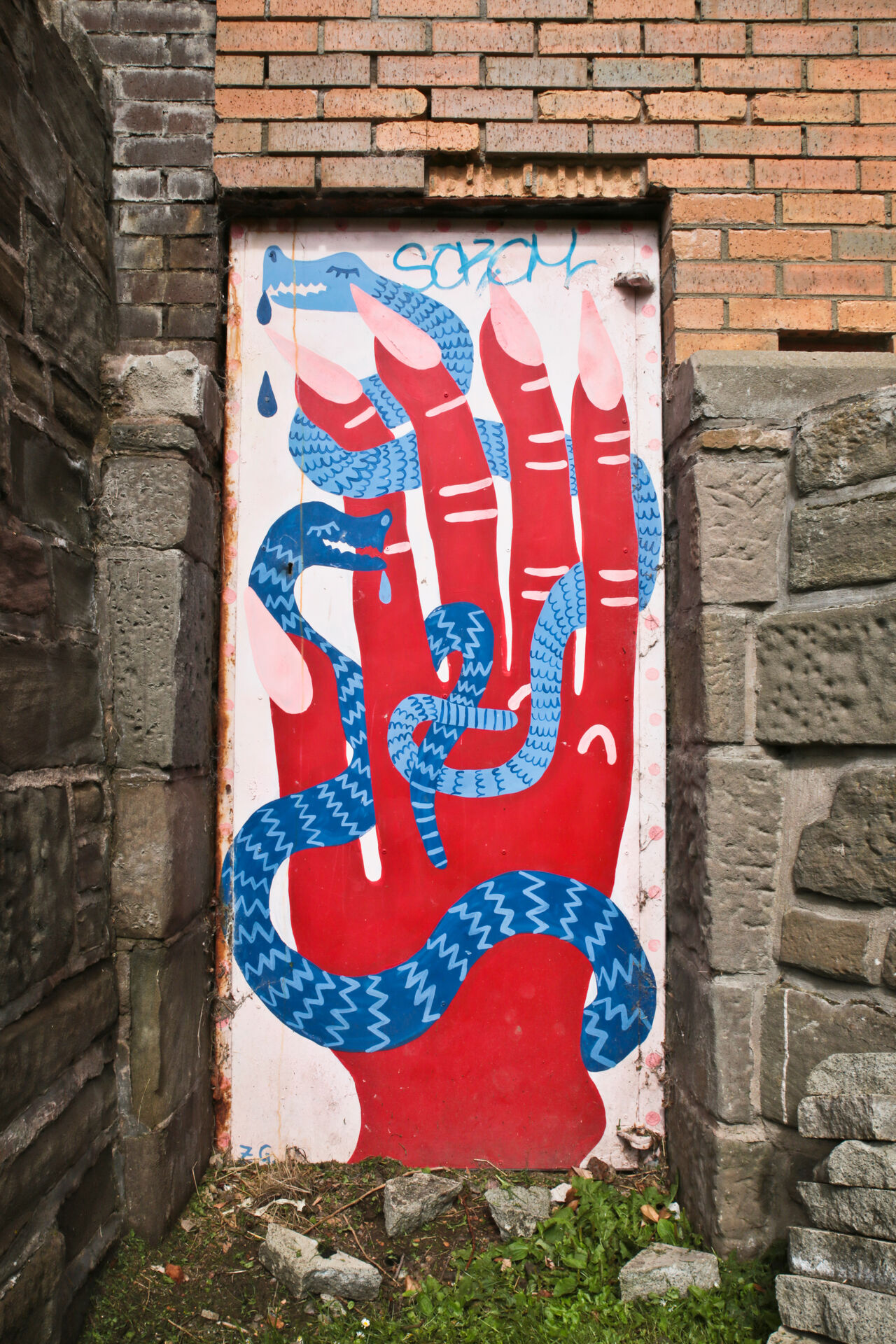 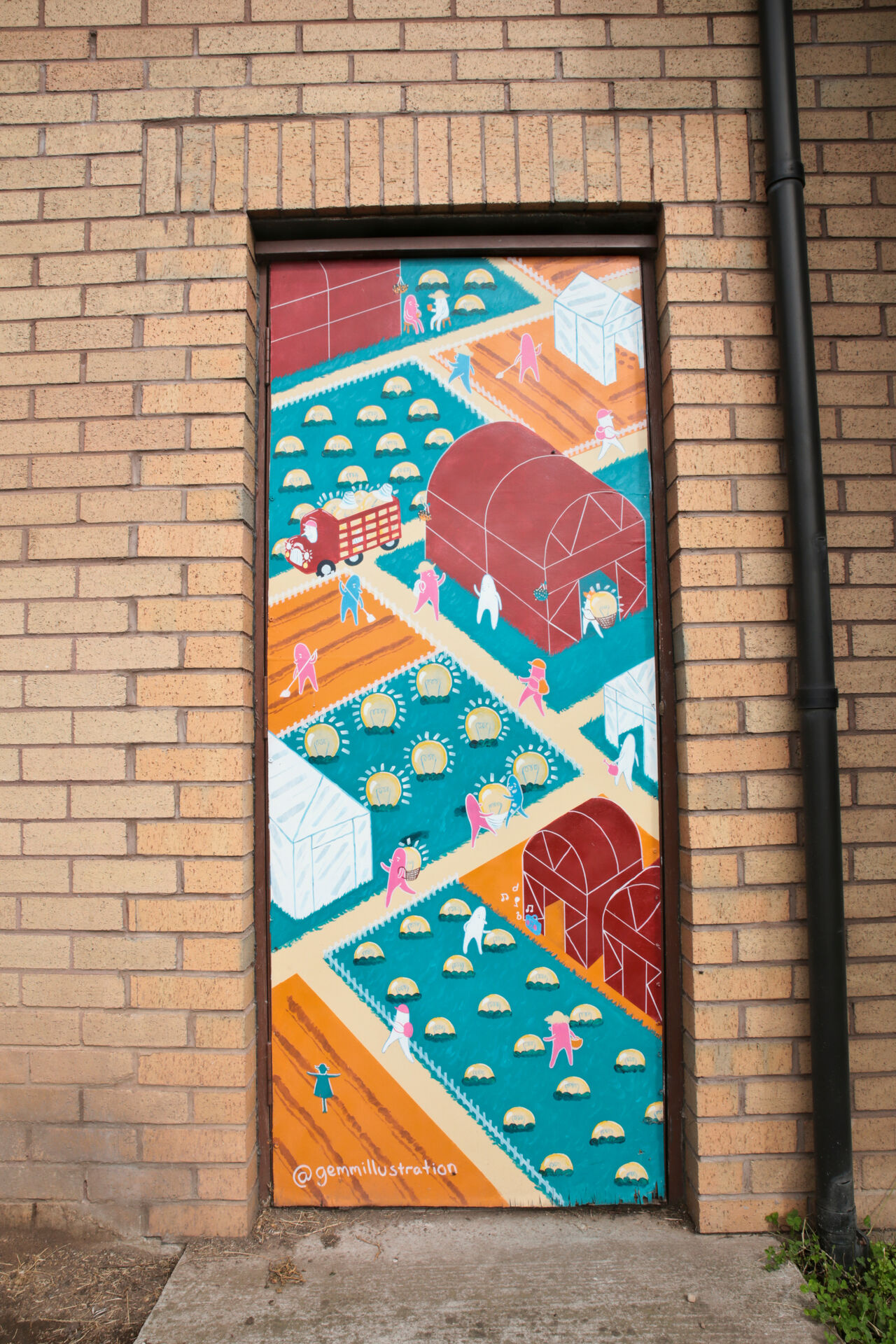 Doors are far easier to get permission and funding for and are a small-scale way to test the public reaction to street art. Ryan McLeod (now at Agency of None) directed me to Annie Marrs at Place Partnership, who was able to fund an initial pilot of six doors. And off we went.

The project has been amazing so far. I still can’t believe how easy it is to get permission for painting doors! 99% of people we’ve asked to paint their doors have said yes without even seeing the artwork. The council have been supportive of this too and made the process very easy for us.

Artists who would love to have some street art up in town can literally ask shop owners, managers, and so on if they can paint their fire escape and I can almost guarantee they’d get a yes. 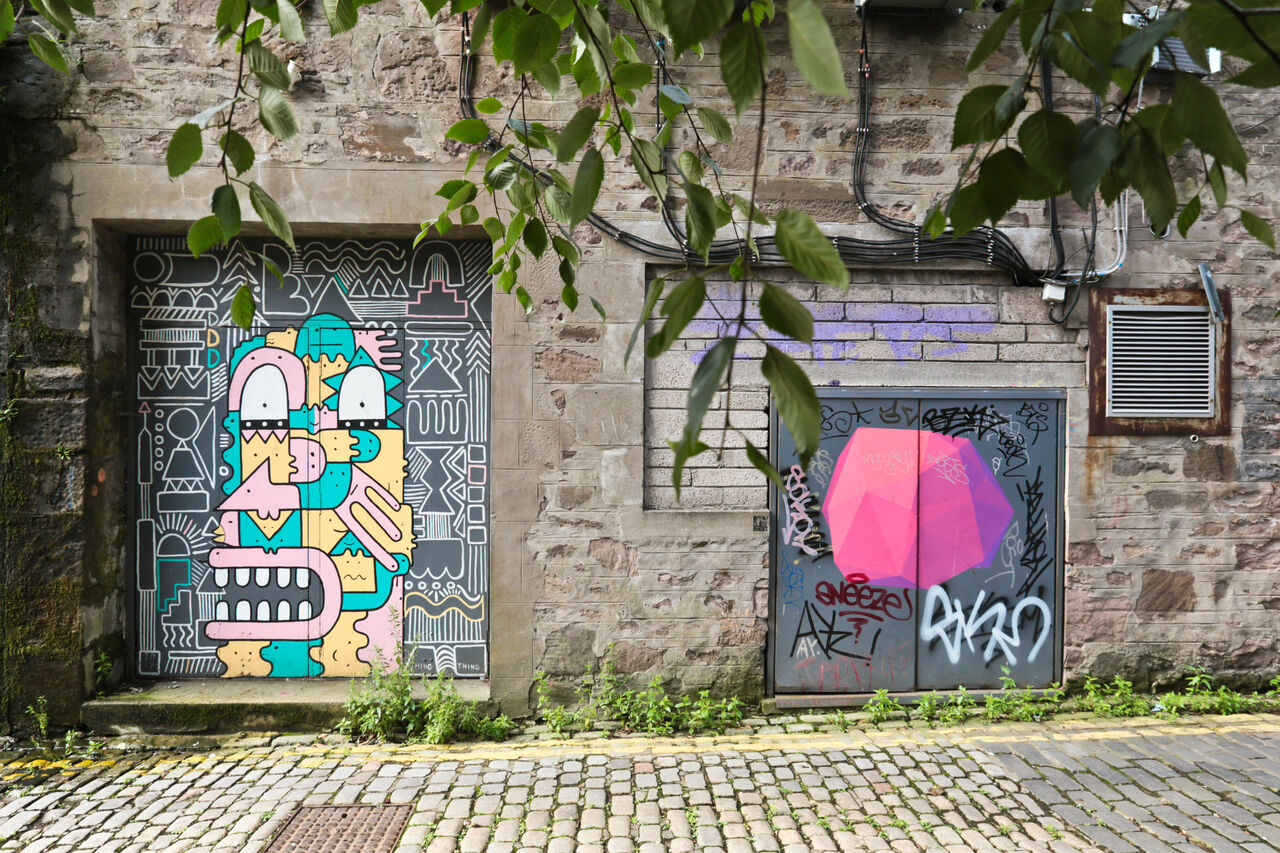 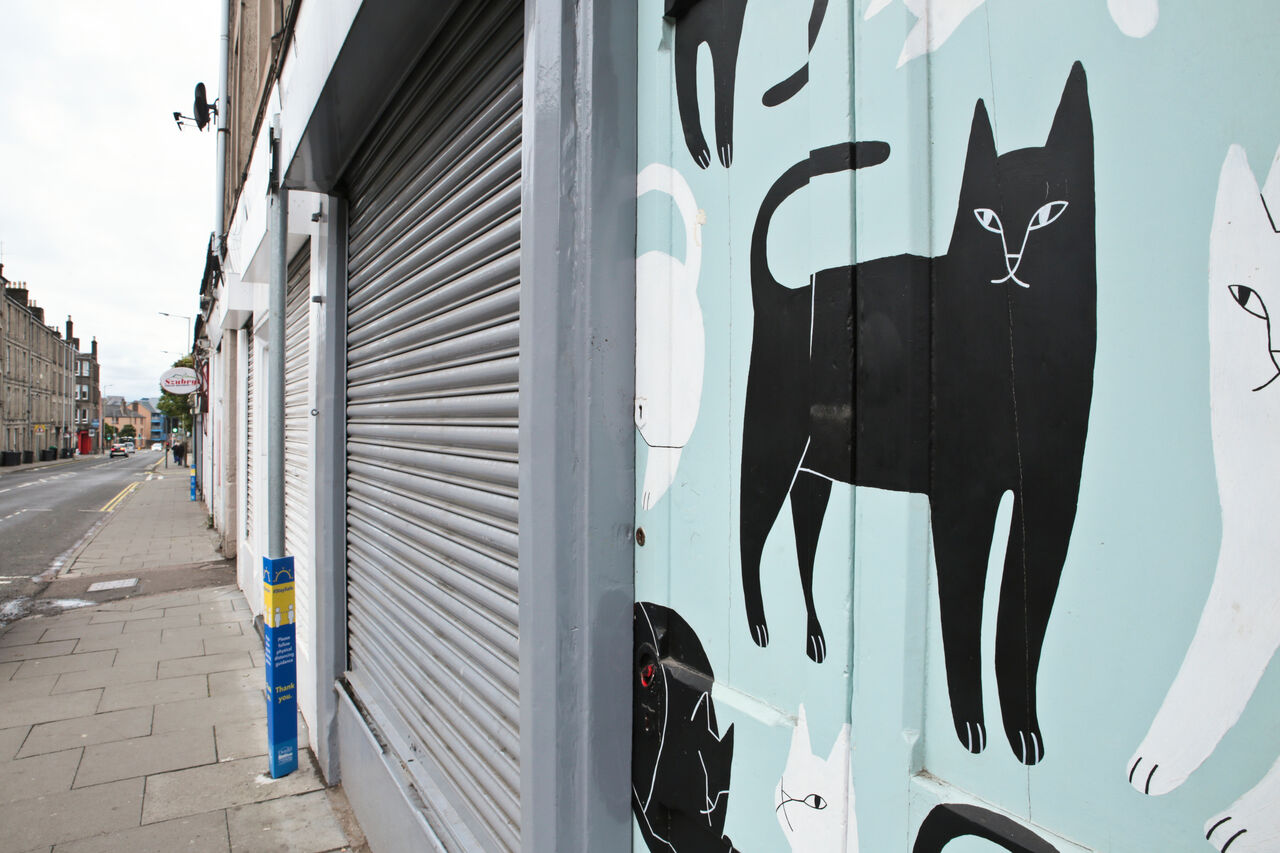 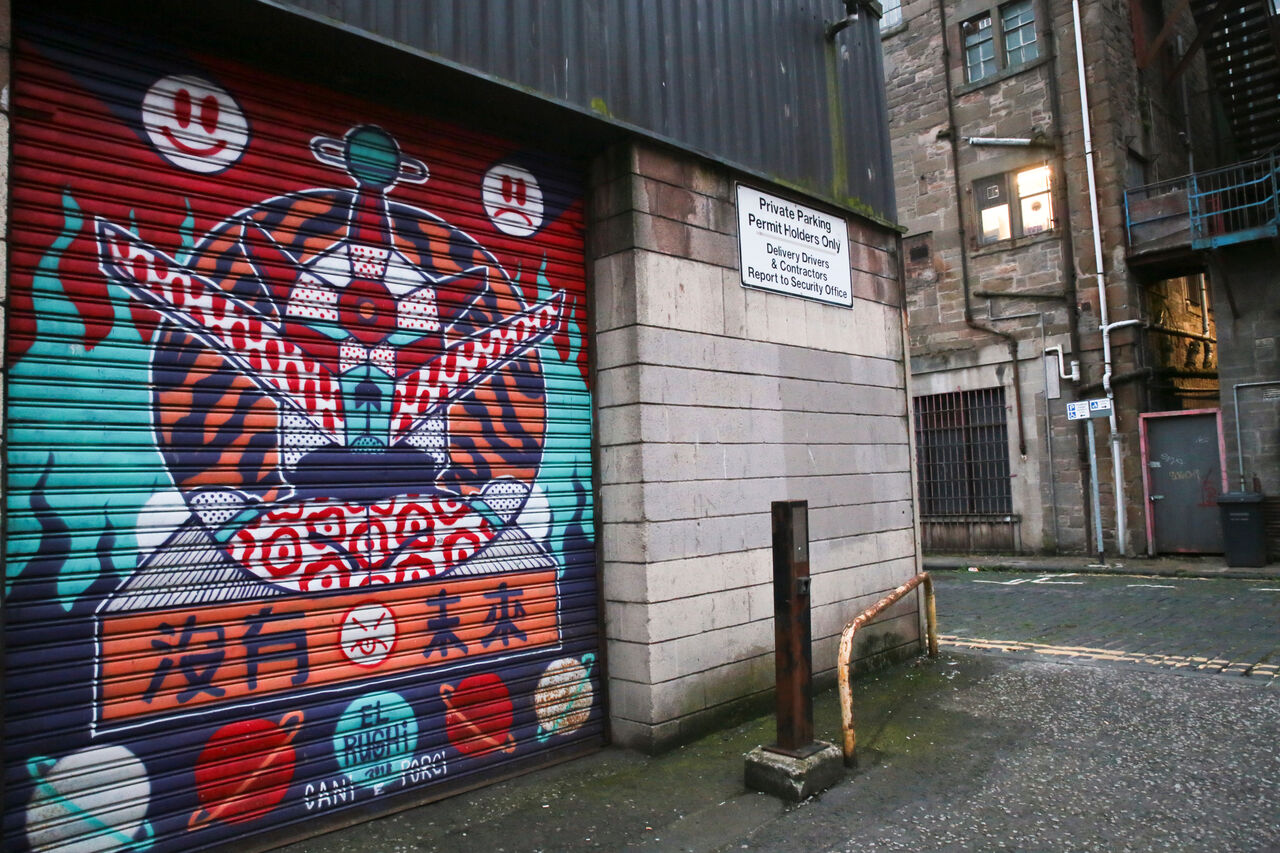 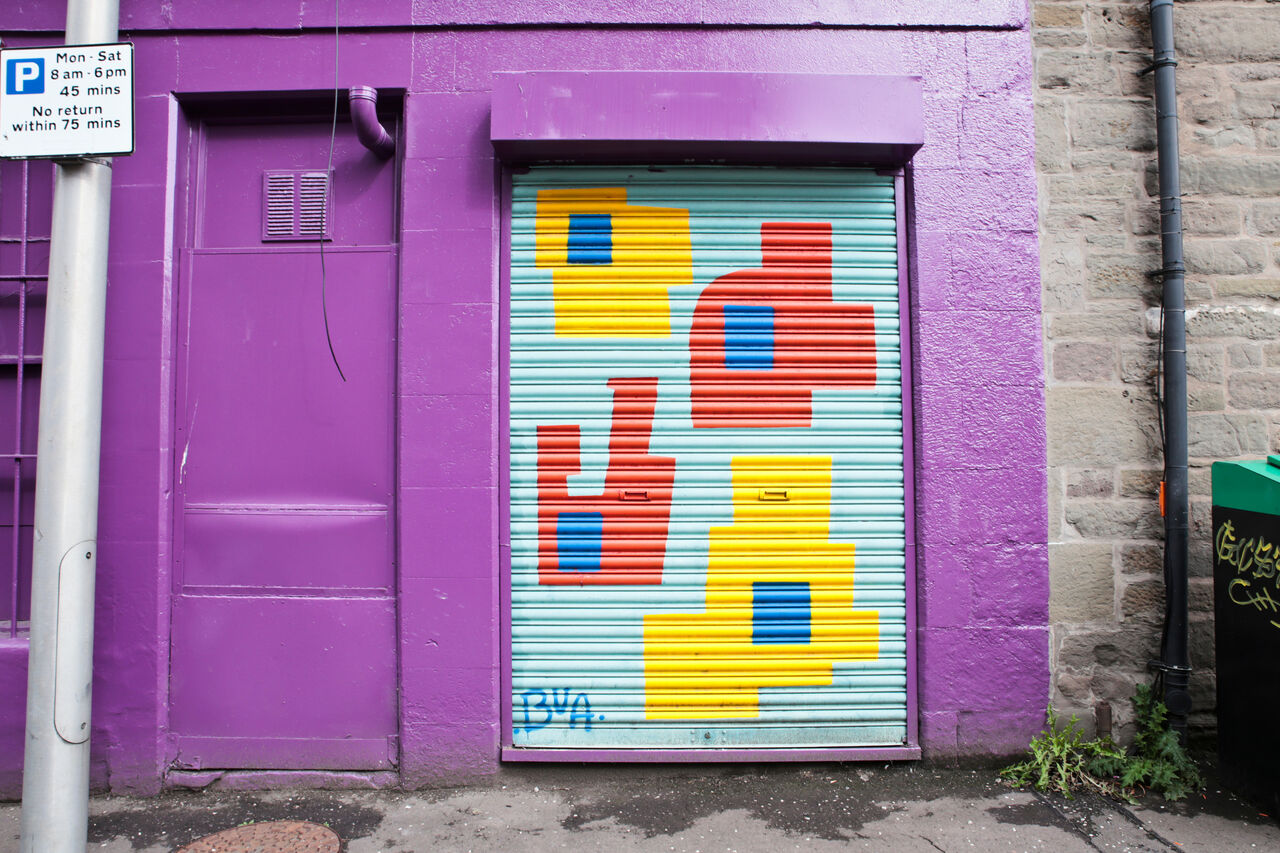 Getting a large mural organised is an entirely different kettle of fish, though. It has taken nearly two years of work to organise a mural in Cardean Street in Stobswell, which has only recently been finished. There are so many different factors involved and many hoops to go through: permissions, consultations, multiple owners, budget, legal issues, etc. Every one of them is a potential breakpoint that could mean the mural can’t happen. It’s exhausting but worth it.

I’m really proud of this project. Nothing beats watching a new piece of art take shape and then seeing the public reaction to it. I feel that we’re creating something people here can relate to and love seeing in their day-to-day lives; it’s very satisfying and I’m glad it’s been so well received.

The reaction has been amazing and a testament to how much people in Dundee love street art. The project has snowballed beyond anything I thought I could achieve. By the end of summer 2020, all going to plan, we will have 40 painted doors, 18 painted Eurobins, two gable-end murals and a large wall mural. I can hardly believe it! 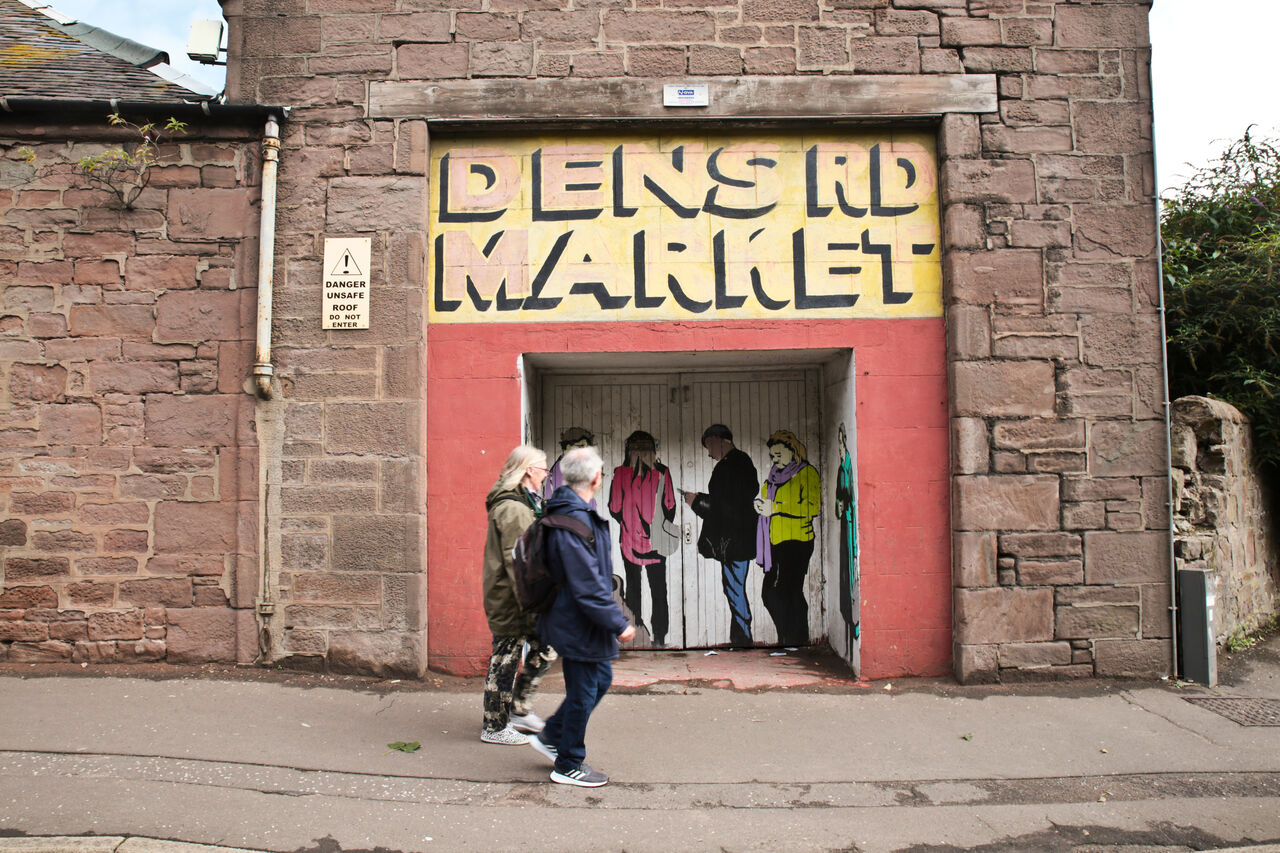 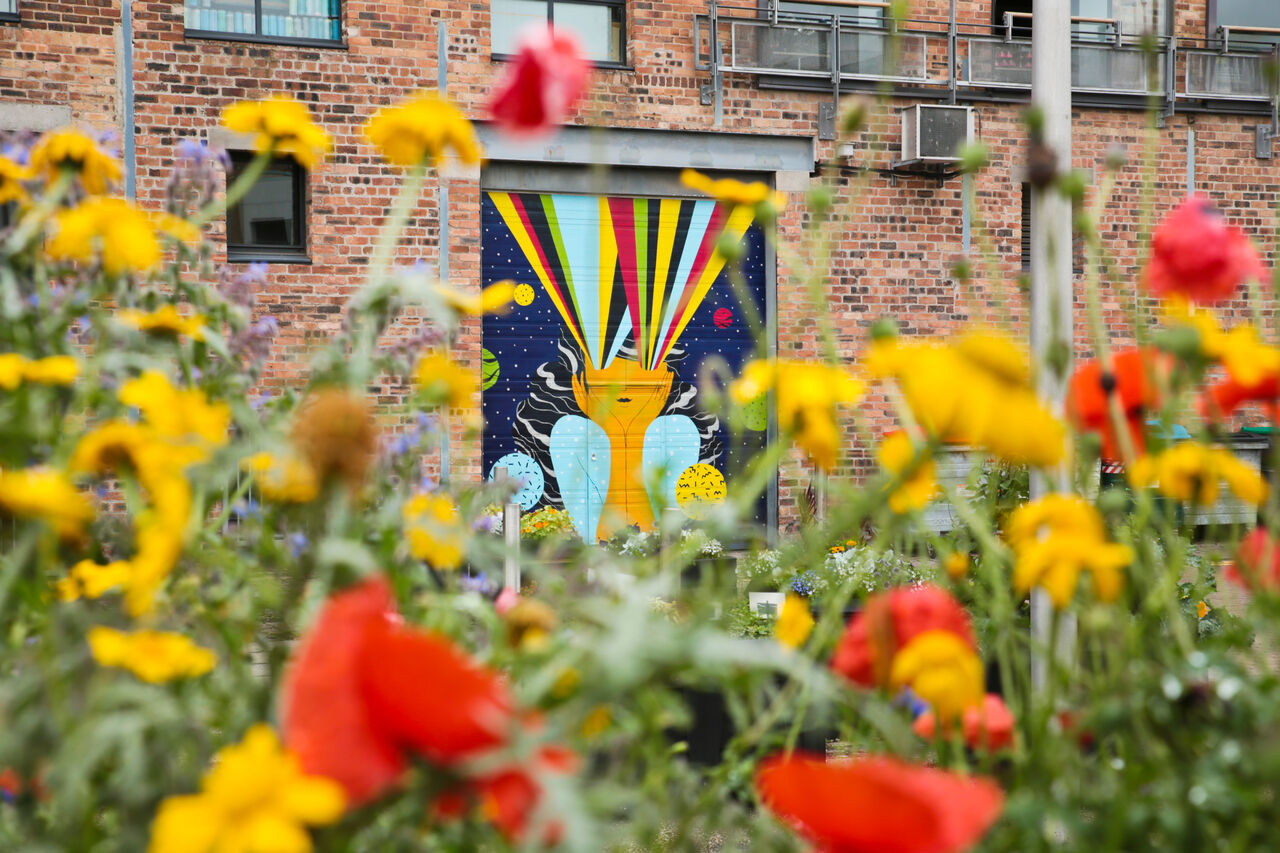 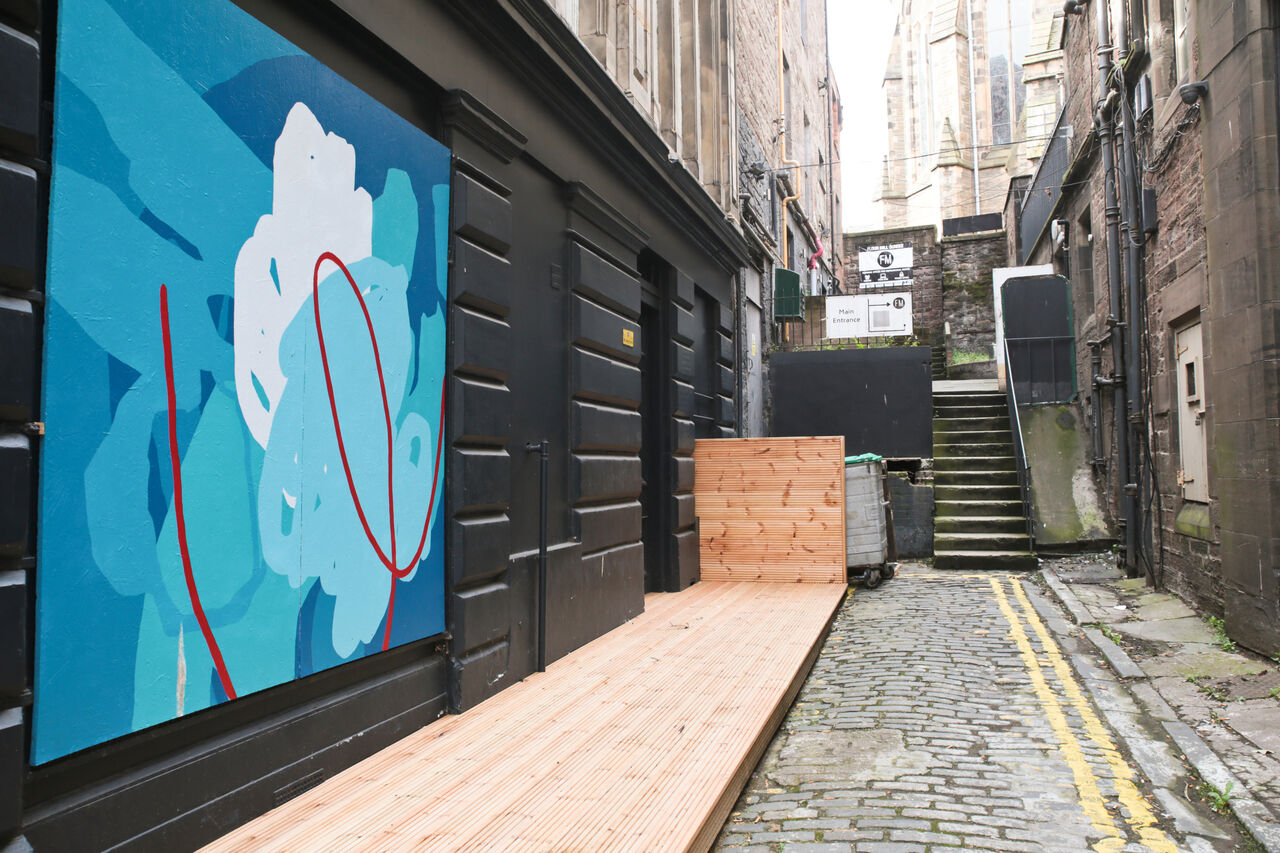 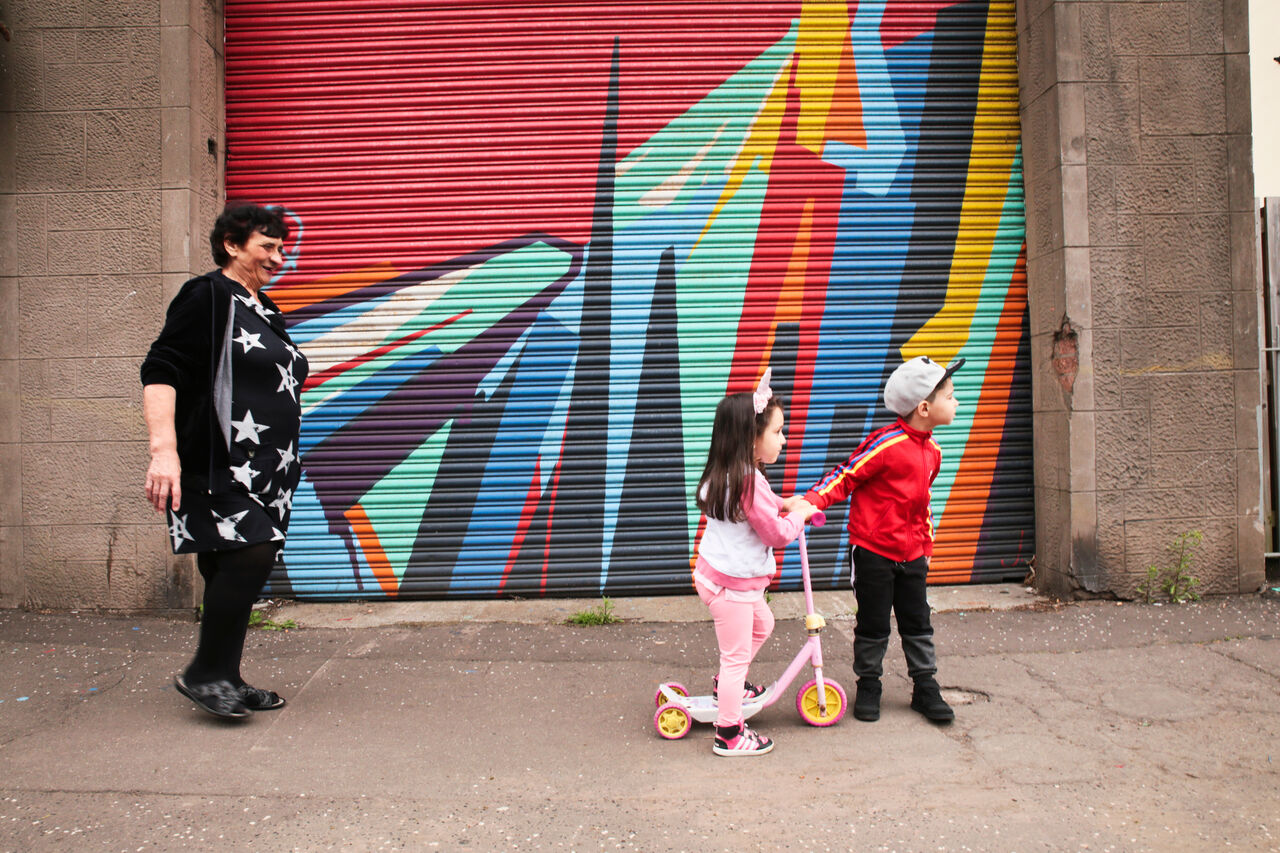 We’re getting closer to the long-term goal for Open/Close: a city-wide mural trail which connects communities with each other, places of work, the city centre and places of cultural interest in Dundee. Ideally, they would be linked by a walking and cycling network so people can easily and safely access all of these areas by active travel, allowing them to discover all that Dundee has to offer whilst reducing emissions and becoming healthier.

This would be fantastic for residents and for tourists. Just imagine being able to arrive in Dundee, picking up one of the soon-to-arrive e-bikes and nipping around to discover the whole city brought to life through street art.

The settings in which the artworks sit add so much and Dundee is such a great city for this. For example, the combination of pieces by Monty Nero and Joanna Craig on the old Dens Road Market look amazing together with the old signage of the market and chimney stack behind. It’s in such a prominent position on Den’s Road so loads of folk see it. I want to see more of that all across the city.

In our next article, find out the process behind how the many painted doors came to be beautifully decorated across Dundee. You can read it here.

Russell Pepper is the director of Open/Close, a community interest company with the goal of supporting artists, communities and creativity in Dundee by creating artworks and installations throughout the city.

Enjoy the museum at home