Reopening Sat 1 May
Menu
Close
V&A Dundee
V&A Dundee
Costume maker Meridith Towne made stunning replica Quant pieces to support our Learning programme. Since COVID 19 means they can't be handled, Meridith explores her work online instead. Read about how she went about recreating vintage designs in a contemporary context.

In my previous article, I wrote about how Quant’s legacy informed my work on this project. You can read that here.

To kick-off this project, V&A Dundee’s Peter Nurick invited me to join him on a trip to V&A South Kensington in London. We had a thorough look around the Mary Quant exhibition there and discussed the options. After seeing the exhibition, we were spoilt for choice! We both made a wish list and narrowed it down based on a number of factors. These included iconic styles by Quant, representations of fabrics, tactile designs for visually impaired people, items that are easy to try on and to display, ease of finding the right materials and ones we really liked.

Once I knew which pieces I was going to recreate, I had to figure out how. It’s very rare for you to see a ‘true’ replica of items like this due to the restrictions we face in trying to make something from the past in a modern context. We don’t train in the same way, make the same tools or fabrics, or work in the same environments. Even the smallest thing can throw off the accuracy.

In fact, re-making something from a more modern era is not easy either. Very few designers, craftspeople or workers note down what they did at every stage, what tools they used and what they were made of, etc. Famously, we still can’t work out how the designer Fortuny made the pleats in his iconic pre-WWI designs.

I have a number of 1960 of dress patterns in my collection which were immensely helpful in getting a general feel for the cuts of the era. However, apart from a few cape patterns, none of them bore any resemblance to Quant’s designs.

I made the capes to an original 1960s (non-Quant) pattern. The mini dress was based on a modern jersey dress pattern, similar to those designed by Quant (showing how modern and timeless many of her designs are). The grey wool waistcoat dress was drafted from scratch, with reference to original patterns from the era for the shape of the skirt, fit of the shoulders and hem length. The hat and bag were also drafted in order to get the design as close as possible to the original. 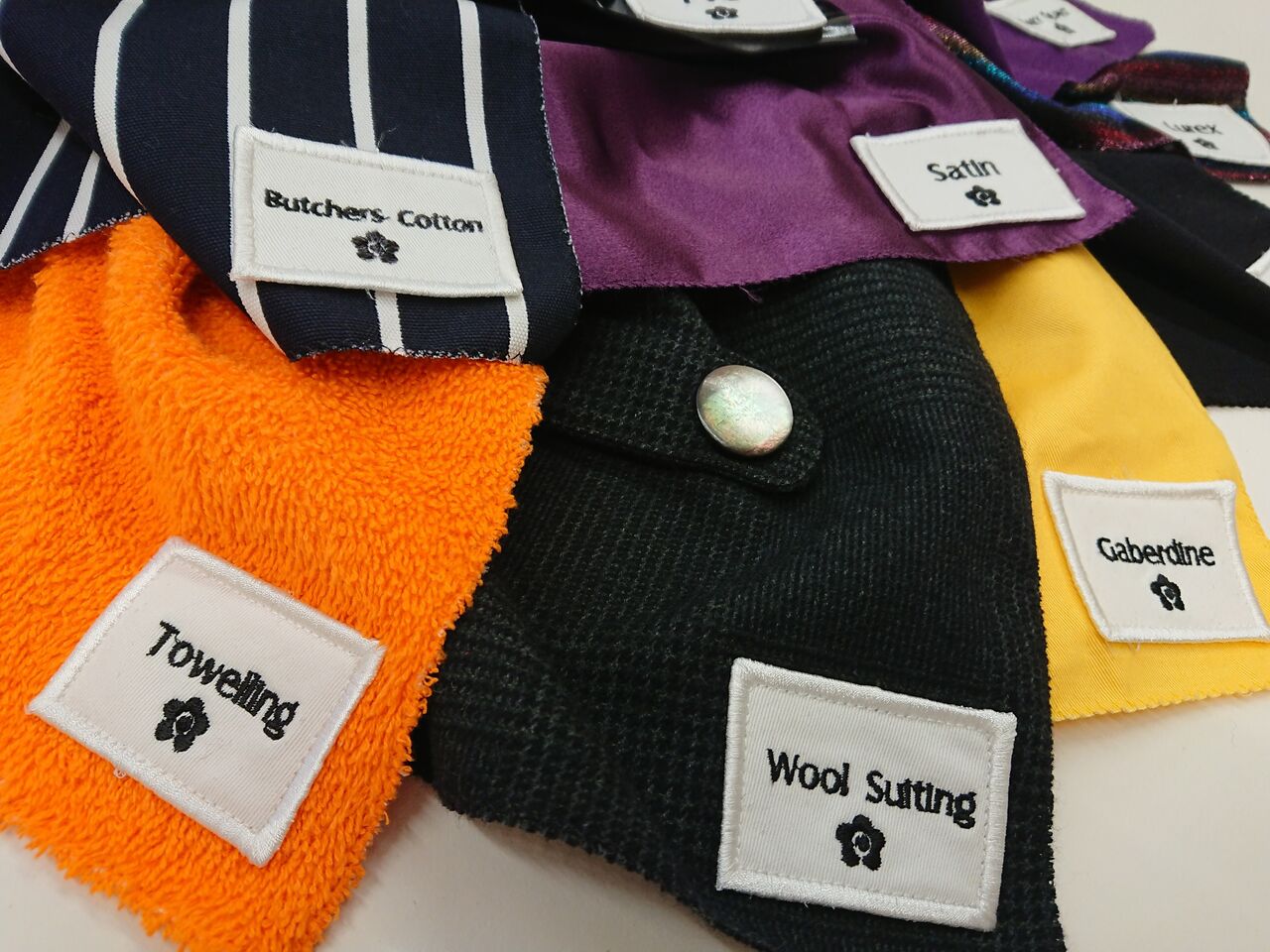 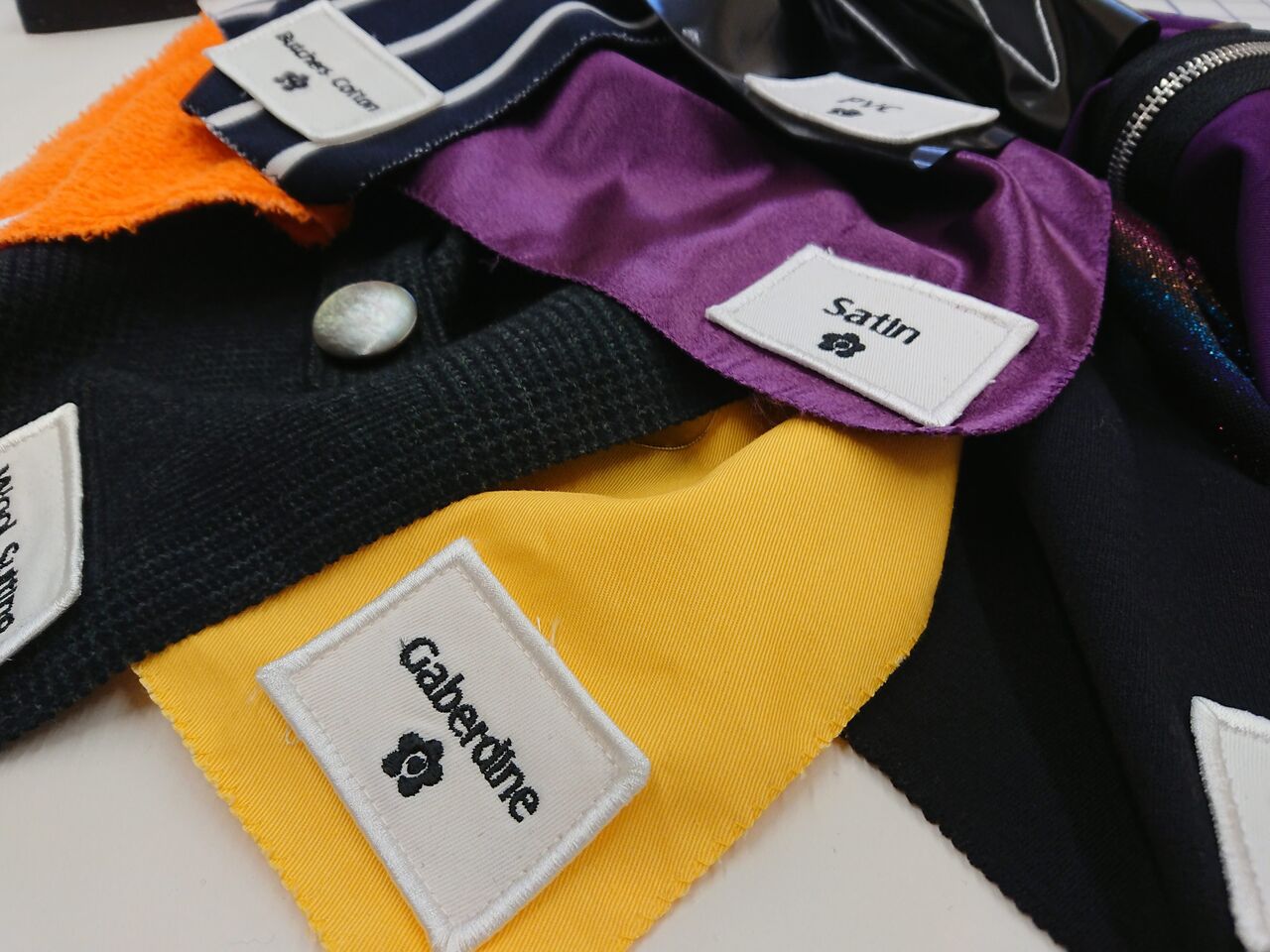 With patterns sorted, I had to think about fabrics. For the grey wool waistcoat dress I opted for pure wool as Quant liked to use very traditional British wools in her ‘workwear’ ranges (this wool tweed was woven in Huddersfield). The capes are made from cotton Gaberdine, thankfully something that is still possible to buy. Finding the bright colours was tricky, though. The colour palette produced for traditional coats is mainly khaki, navy and brown. Quant specially commissioned the bright colours you see in her designs.

The bag and hat are made from PVC. This fabric was invented back in the 19th century but until the 1960s had not been widely used in fashion. I had never worked with it before. The PVC of the 1960s is heavier than that produced now. Getting hold of raincoat material is difficult unless you want it wholesale, so to get around this I interfaced the PVC to give it structure. 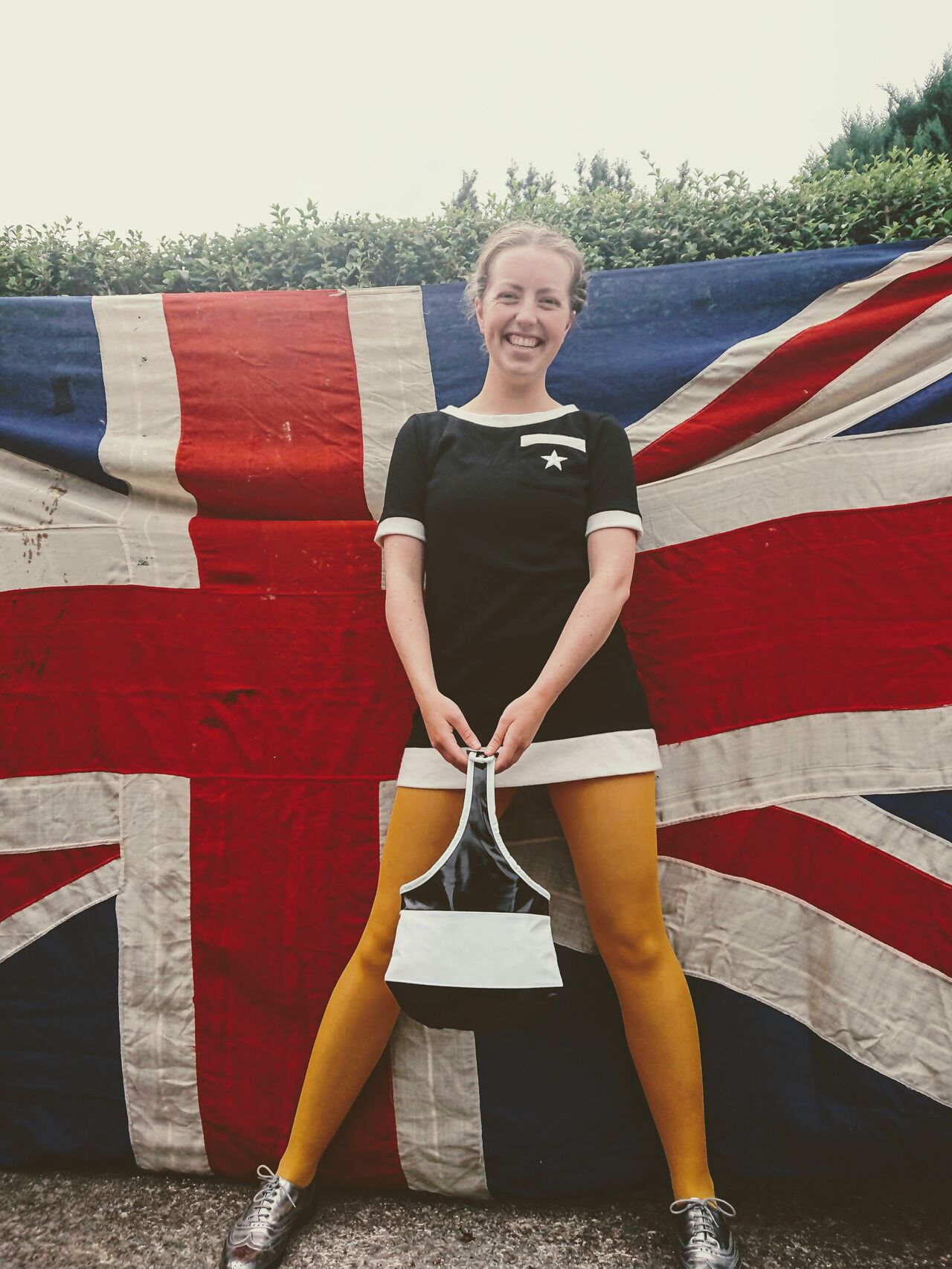 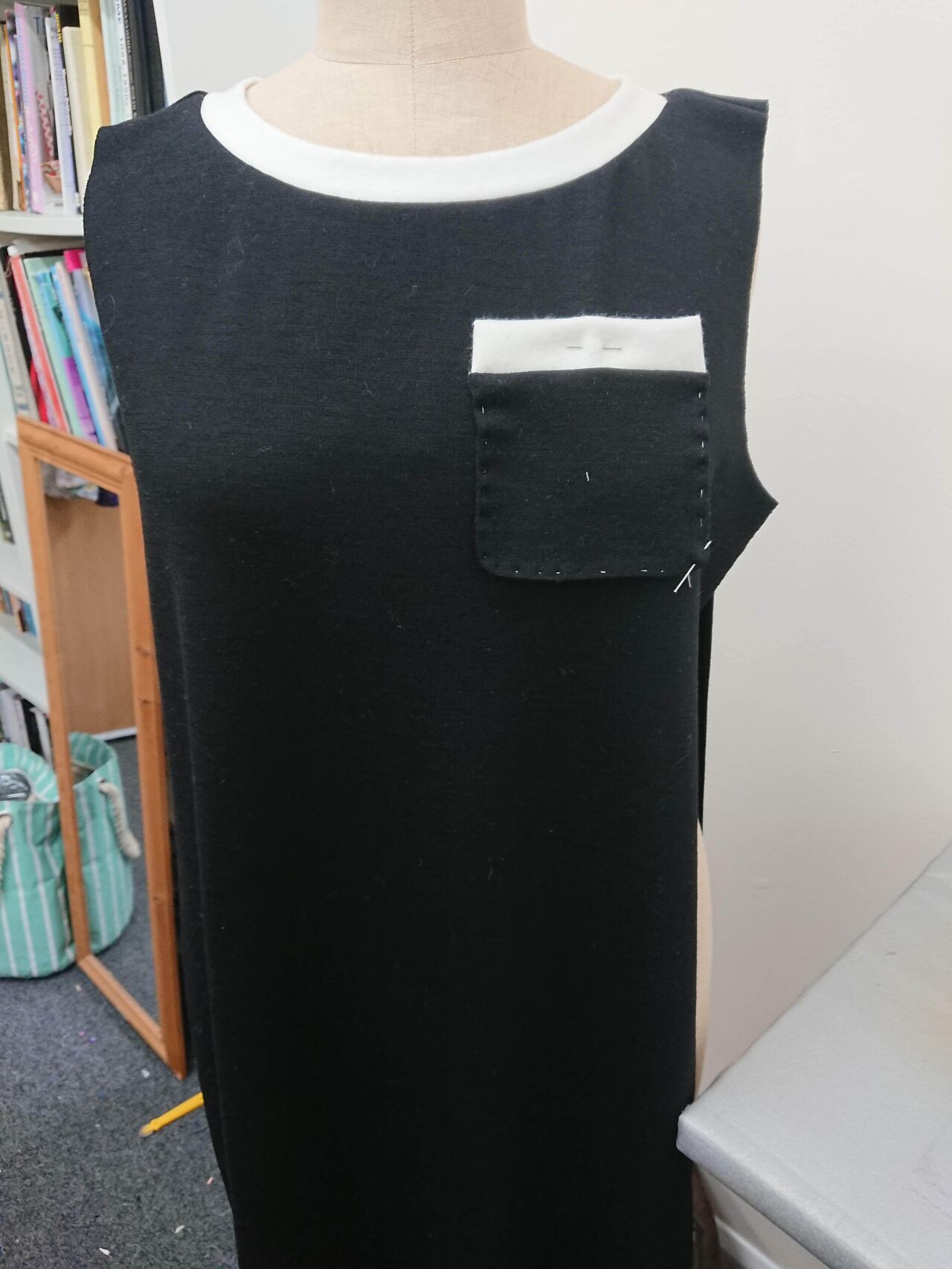 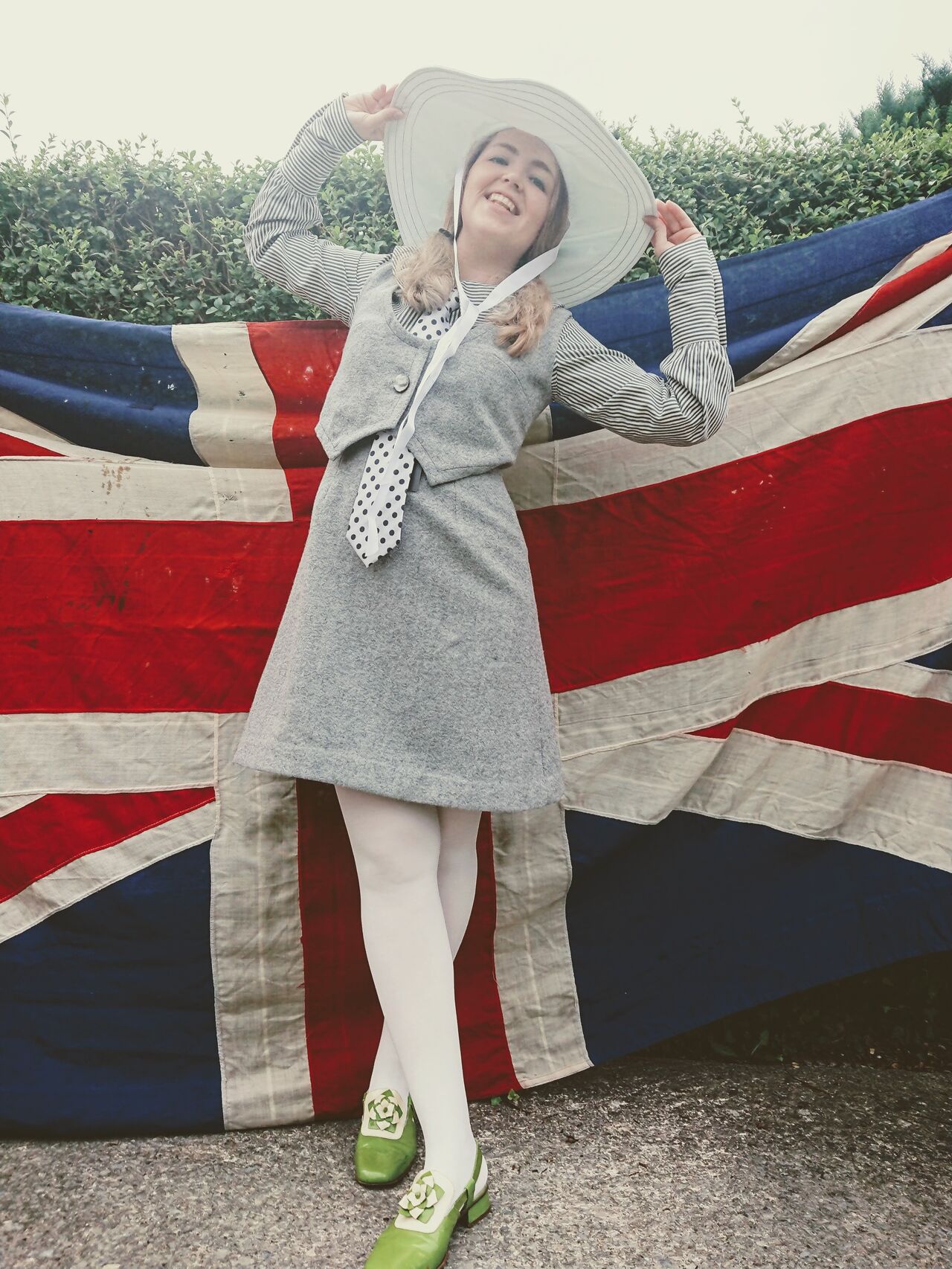 Throughout this project, I found the slight varieties in seemingly very similar designs really interesting. For example, the pockets on the capes. I’ve seen details of three different finishes on them. I’ve seen various widths of capes, the same dress with different details or binding, etc. I would be fascinated to know if these slight variations are mainly from the beginning of her career, when items were being made on a small scale, or conscious design changes over subsequent mass- produced seasons.

Many of the items seen in the exhibition were ‘mass produced’, particularly the later items, in various levels of scale. The earlier styles were produced by a small workroom of people overseen by Quant. Then they moved on to large-scale production. If you look at some of the items, there are mistakes: press studs aren’t aligned, hems are wonky, buttons aren’t central, etc. This is fast fashion before computerised machinery.

Most of the finished garments I produced were intended for visitors to have a look at and try. Put the cape on, pose with the hat and bag, get a real feel for them. The grey waistcoat dress and mini dress are designed to be on a mannequin for display. It’s a shame that measures in place for COVID 19 mean visitors won’t be able to use this collection as it was intended, at least for now.

In the final article, I look at some of the challenges involved in replicating these wonderful designs.

Our Mary Quant exhibition is now closed. You can still enjoy videos and stories relating to the exhibition here.

Meridith is a costume historian and historic dressmaker who works with museums to complement exhibitions, enhance visitor experience and facilitate learning with dress-up boxes.