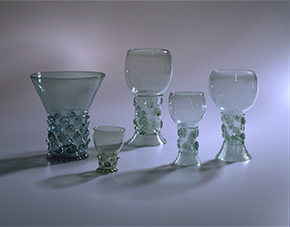 Drinking glasses with applied prunts and trailed and tooled footrim, Germany or the Netherlands, ca. 1590-1625, Museum no. 172-1933, © Victoria and Albert Museum, London.

‘The Extraordindary Case of the Blood-Drinking and Flesh-Eating Cavaliers’, Angela McShane and Garthine Walker, eds., in ‘The Extraordinary and the Everyday in Early Modern England Essays in Celebration of the work of Bernard Capp.’ Hampshire: Palgrave McMillan, 2010.

Explorations of Material Culture. Seminar Series organised and held at University of Helsinki, 8-9 May 2014.

‘How happy's the state where no discords are breeding.' Harmony and the Politopop of later seventeenth-century England.

Paper delivered at the Early Modern Literature, Culture and Society seminar series, organised and held at University of Birmingham, 15 January 2014.

The 17th Century Political Ballad as Subject and Object. Paper delivered at the seminar series, Print and Material Culture, organised by John Rylands Library and held at University of Manchester, Deansgate, 20 November, 2013.

Intoxication and Early Modernity: An Ontological Cocktail. Paper delivered as part of a research series, organised by and held at University of Manchester, 21 November 2013.

Writing and Singing in the City: Newcastle Ballads in 17th and 18th Century. Lecture delivered as part of Newcastle and Print symposium organised by and held at Newcastle Literary and Philosophical Society, 25 November 2013.

No News like Ballad News: the Politopop of 17th Century England. Paper delivered at the Seventeenth Century Seminar organised by and held at the Institute for Historical Research, London, 31 October 2013.
Material Culture in Europe, 1500-1800. Lecture delivered to History Undergraduates: Making History Course, organised by and held at University College London, 17 October 2013.