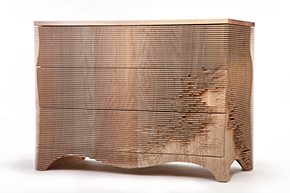 The Design Fund supported the acquisition of contemporary design objects at the V&A from 2011 to 2015. The Fund has enabled the Museum to purchase a number of notable objects by designers such as Joris Laarman, Fredrikson Stallard, Hella Jongerius and nendo. The works acquired by the Design Fund each year have been exhibited as part of the London Design Festival, in our permanent displays and in exhibitions.

These new acquisitions have significantly enhanced the V&A’s holdings of contemporary design; a collection which reflects what is new, influential, innovative or experimental, and what is representative of contemporary trends in design and society. The collection spans all aspects of design and art including fashion, furniture, craft objects, product and graphic design, digital media, architecture, photography, prints and drawings.

The V&A is grateful to the many supporters who have made these acquisitions possible, including the Founder of the Design Fund, Yana Peel, and its Chair, Francis Sultana. We look forward to continuing to broaden our contemporary design collection as the recently established Design, Architecture and Digital department begins a new chapter.

Objects purchased by the Design Fund in 2014

Objects purchased by the Design Fund in 2013

‘The Toaster Project’
2009
‘The Toaster Project’ is currently on display at the Science
Museum on the ground floor as part of the Making the Modern
World exhibition.
Great Britain
Made by Thomas Thwaites (1980–)
Book and film documenting the project

For more information about the pieces acquired please visit Search the Collections.