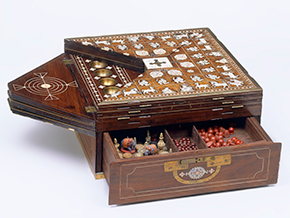 I am an Andrew Mellon Post-Doctoral Research Fellow working on the Mellon-funded Pilot Project toward the creation of a V&A Research Institute.

My research is concerned with ways of studying of things and the thinking that they allow, focusing in particular on overlaps between the material cultures of science, technology, craft and play.

My doctoral project, 'Scientific Playthings: Artefacts, Affordance, History', looked at three 19th-century scientific instruments that become toys – the string surface model, the Crookes radiometer and the gyroscope – as case studies to explore the understanding that things afford at the levels of encounter, production, use and re-appropriation. I argued that considering instruments as playthings restores to the artefacts their mobility and transformability, and brings attention to the evolution in what they offer to action, perception and understanding.
My interest in how we learn from made things and from making processes is very much shaped by my background in practice. I gained a BA in Graphic Design (American University of Beirut, 2001) and an MA in Book Arts (Camberwell College of Arts, 2004) before taking an MRes in Humanities & Cultural Studies at the London Consortium (Birkbeck, University of London, 2009) where I also completed my PhD (2013).

‘Instruments as Playthings: an alternative methodology for the study of scientific artefacts’, article for a special issue on ‘Philosophical Toys Today’ in ‘Teorie vědy/Theory of Science’, Vol 35, No 2 (2013).