Make your own toy theatre

Toy theatres (or ‘juvenile drama’) were hugely popular in the 19th Century, and were collected by adults and children. Every successful production staged in London’s West End theatres would be reproduced in miniature 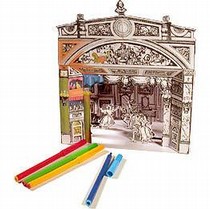 Using the kit below you can assemble and decorate your own toy theatre as shown, originally published by Pollock's toy company in the 19th century.

The kit includes a paper model to cut out and colour, complete with characters and scenery from the pantomime 'Cinderella', alongside instructions to help you assemble your theatre.

There's also an original toy theatre script of 'Cinderella' for your characters to perform! Click on the links to download the three documents: