Disobedient objects are often everyday items that have been turned to a new purpose. But social change is about making as much as breaking. Sometimes designing a new object creates a new way to disobey.

Below are some downloadable PDF how-to guides for making your own version of some of the disobedient objects found in the exhibition. 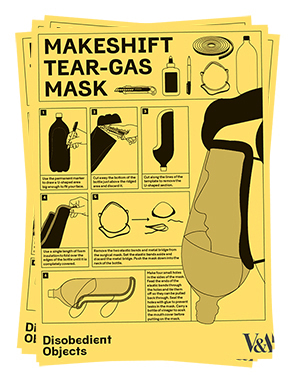 How to Guide: Makeshift Tear-Gas Mask. Illustrated by Marwan Kaabour, at Barnbrook 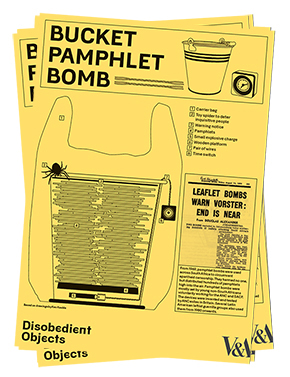 How to Guide: Bucket Pamphlet Bomb. Illustrated by Marwan Kaabour, at Barnbrook. Based on a sketch by Ken Keable, anti-apartheid activist and author of The London Recruit.

How to Guide – Makeshift Tear-Gas Mask

Handmade gas masks were an essential response to police actions during the 2013 mass protests in Istanbul. These events saw the Turkish government release a record amount of tear gas to disperse demonstrators. Protesters devised a way to protect themselves with basic materials like plastic bottles, elastic, and strips of insulation foam.

Since 2013, the idea spread and handmade gas masks have appeared on protestors as far away as Caracas, Venezuela.

How to Guide – Bucket Pamphlet Bomb

This how-to is based on sketch by Ken Keable, one of the Recruits, and is based on the research in his book The London Recruits. These devices were developed by ANC exiles in Britain, who tested prototypes in Bristol, the Somerset countryside, on Hampstead Heath and in Richmond Park. 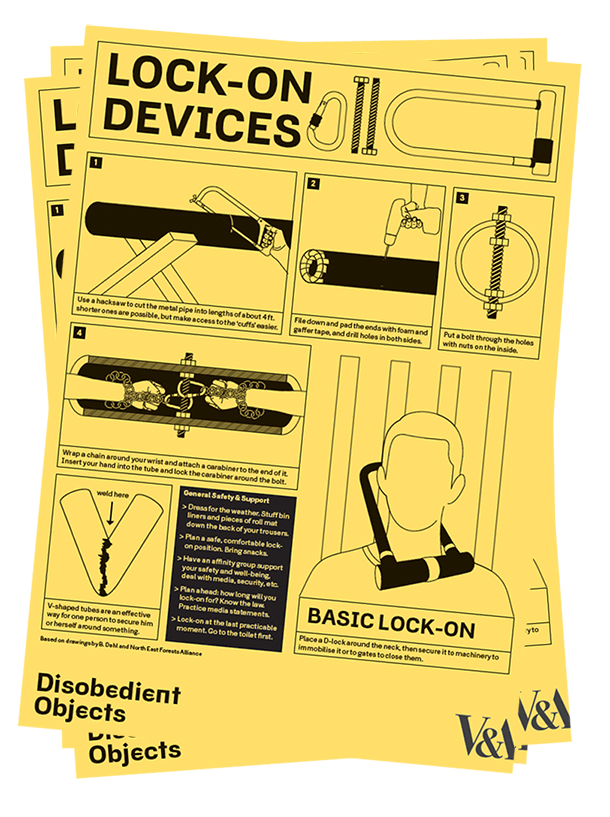 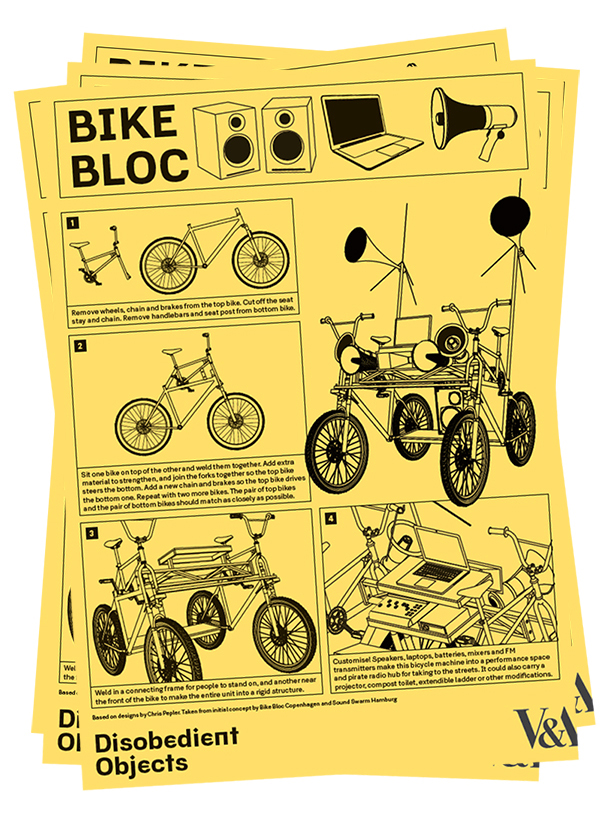 How to Guides - Bike Bloc. llustration by Marwan Kaabour, Barnbrook.

How to Guide – Bike Bloc

The Bike Bloc was first produced as part of the mass civil disobedience against the COP15 Climate Summit. Discarded bikes were welded into ‘machines of creative resistance’ in an initiative by the UK Climate Camp and the Laboratory of Insurrectionary Imagination. Organised in swarms, bikes formed blockades and decoys, supporting thousands on foot. They helped protesters breach the summit’s security cordon and hold an alternative People’s Assembly. The one shown here, nicknamed the sound swarm, carried a DJ who broadcast via several bikes with independent speakers. The story of the bike bloc actions are told in two documentaries which you can find online – Just Do It and Pockets of Resistance.

How to Guide – Lock-on

There is a long history of people using their bodies as a blockade in acts of non-violent direct action. Lock-on arm tubes were first invented in 1989 during forest protection blockades in Coolangubra, Australia. Since then, partly through how-to guides like this one and this one, the design has spread globally as a popular and effective tool of non-violent direct action. 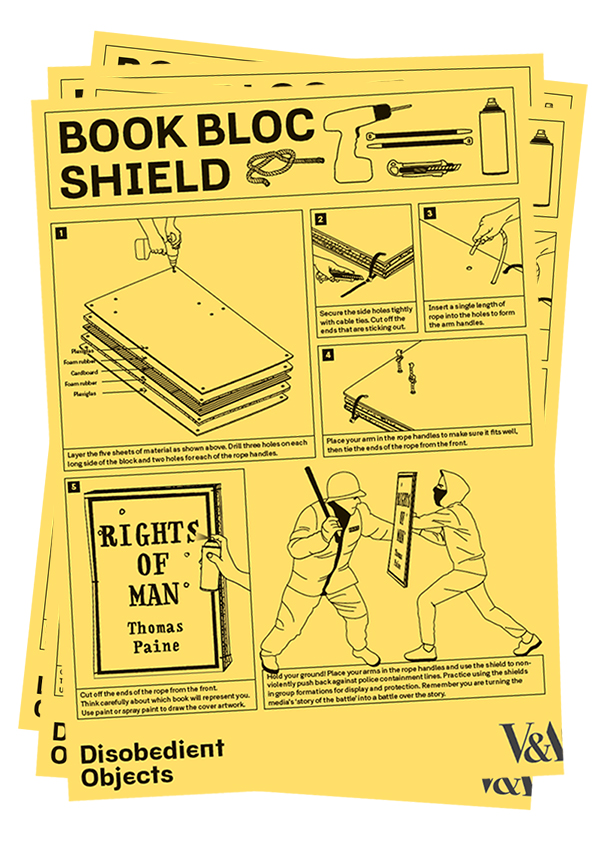 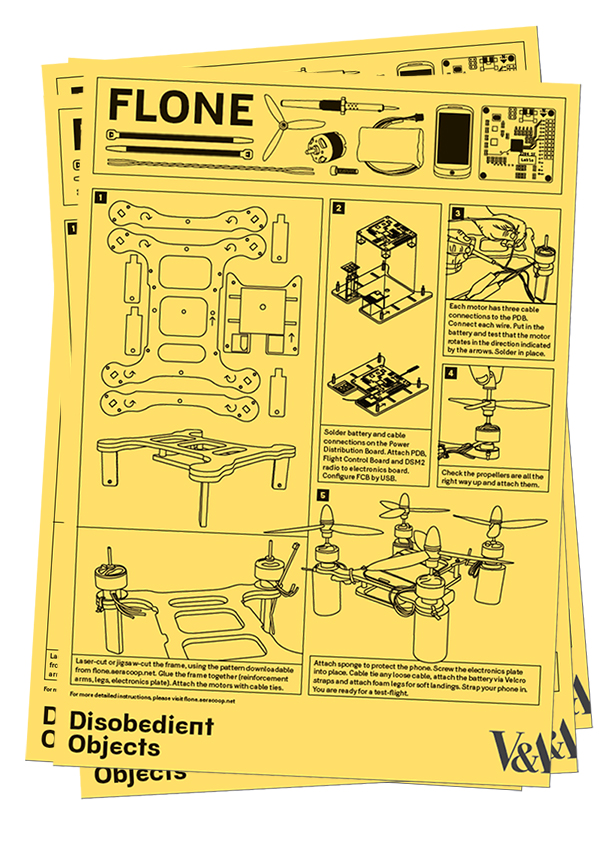 Flone is a cheap design for a home-made drone that carries a mobile phone. A full, more detailed how-to guide to making your own can be found here. It has been used to film demonstrations in Spain like this one against bank evictions of mortgage debt victims. A drone like this can be used to film police and demonstrations, to carry small objects, or for other uses not yet invented.

How to Guide – Book Bloc Shield

The Book Bloc was first created by Italian students in 2010, protesting against cuts to education, but the idea spread quickly among student movements across Europe and the US. You can see a timeline of their spread and see videos of them in action here, and read a more detailed history written by one of the Italian collective who first produced them in the Disobedient Objects catalogue. You can also watch a video how-to guide to making book bloc shields here. 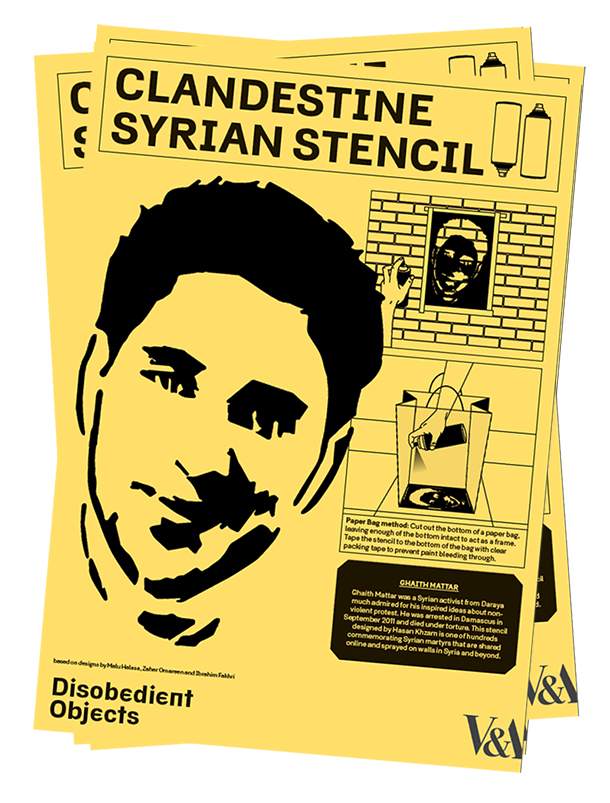 How to Guide – Clandestine Syrian Stencil

This stencil honors Ghaith Mattar, a non-violent Syrian activist who died under torture conducted by current president Bashar al-Assad’s regime. It is based on a design by Malu Halasa, Zaher Omereen and Ibrahim Fakhri. Clandestine Stencils like these honor the dead and are sprayed covertly around Syria and shared around the world through online communities like this one.