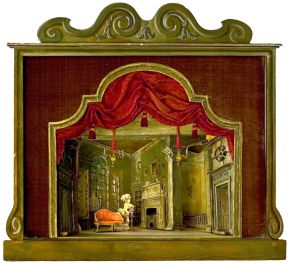 Oliver Messel (1904-1978) epitomised the sophisticated and fashionable in mid-20th century theatre. He began work in the 1920s, when the detailed style of realism had given way to a more selective, distilled truth. He understood that a stage designer was part of a team and was extraordinarily sensitive to the dramatic requirements of action and atmosphere. He could set the mood as surely as any producer or actor and complemented the work of both.

He studied painting at the Slade School of Fine Art but his first exhibited works were masks. He began in theatre design by creating masks for Zephyr and Flore for the Diaghilev Ballets Russes and then for C B Cochran revues, notably the routine of Dance Little Lady in This Year of Grace (1928). From the start his work was anti-realistic, highly stylised and elegant.

Designs for the 1929 Cole Porter revue, Wake Up and Dream, showed his knowledge of and ingenuity with materials. In one scene, the chorus dresses were made of a fabric which looked like glazed butter muslin, the bodices sewn with hundreds of black, blue and silver mica spangles, giving a frosty icicle effect. Wanting the effect of glazed porcelain for a Chinese character, Messel ordered a specially woven fabric and painted it with a fine layer of rubber, making it fall in the required heavy folds. In Heaven in the 1930 Revue, Lola Montez wore a dress inset with cleaning cloths, loofahs and bath scrubbers. Conventional costume makers were unsympathetic to his demands, so he worked on some of the costumes himself, helped by his sister Anne.

A master of theatrical illusion, Messel used mundane materials to deceive audiences into seeing precious gold, gems and sumptuous fabrics.In the 1940 The Tempest, gilded pipe-cleaners became goldwork or embroidery; chandelier drops backed with sweet papers set in pipe-cleaners became precious stones.He mixed fabrics - putting off-white silk sleeves into a brown heavy wool doublet, topped off with a cloak made of scene canvas painted in shades of pink and mauve. He used plastered string, cut metal, cellophane, moulded and painted leather, dishcloths, sponge - whatever created the effect he wanted. He knew that what looks real close up, does not always look real from the audience. See  the images below for examples. 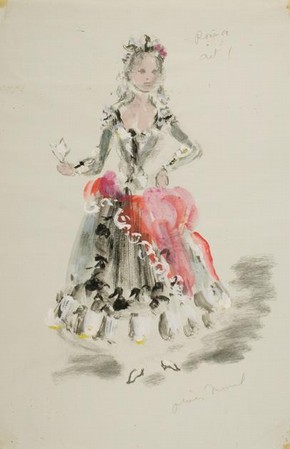 Costume design for Rosina in The Barber of Seville, Oliver Messel, Museum no. S.40-2006

He also had great success as a designer for opera, especially Mozart and Rossini at Glyndebourne. His opera costumes were, to quote Andrew Porter, ‘unerring in their musical sense’, cleverly matching cut and colours to the music. Working on Mozart’s Il Seraglio, he knew that he had to achieve not an authentic ‘East’, but the East of Mozart’s music - filtered through Viennese ears.

Messel was inventive, practical and entirely theatrical. Endlessly seeking perfection, he supervised every detail. A headdress might be remade three times - often improving only small details. For wigs, he worked on a bust, not just a block head, which made it easier to assess the final result and maintain proportions.

Working for Messel was a daunting but priceless and wide ranging apprenticeship. In the 1950s he worked on plays, ballets, operas, musicals and interior decoration for hotels and shops. Before creating anything, he immersed himself in the play - in the overall mood and the director’s interpretation. He then created the settings to reflect it. Period or style were tempered with an exceptional poetical quality and imagination, while costumes reflected period and character.

Although he worked happily in many periods, he was happiest with ages of elegant artificiality, like the medieval period and the 18th century. The range of his work required a vast knowledge of painting, furniture, architecture and costume. He researched in museums, visited private houses, pored over old prints and tapestries, looked at books and pictures. Then he produced endless sketches and constructed the set models; he never worked on the costumes until the sets were finalised.

Messel’s drawings were not a detailed blueprint, but showed the essence of the costume. Faces and hands were schematic not because he couldn’t draw them, but because they were only there to give proportion to the whole. The designs terrified the makers at first, but Messel didn’t create the impossible and knew exactly which fabrics to use, how he wanted them cut and decorated. If challenged, he could make anything himself, out of anything. He was brilliant at solving problems, getting effects in unconventional ways with unconventional fabrics. He had a remarkable sense of texture and a highly personal colour sense but didn’t create unified groups of costumes, instead he relied on the sets to pull the stage picture together. 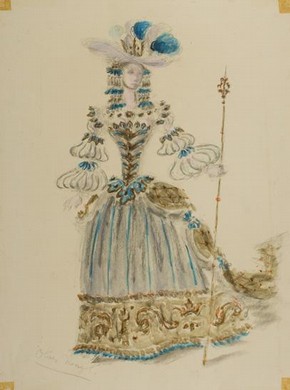 Messel fed the imagination. He was sometimes called a brilliant amateur. In fact, he was a hardened professional who knew the theatre inside out. The pipe-cleaner illusions only seemed amateur to those of a literal turn of mind - sometimes they were the result of working on tight budgets but more often they were used because illusion in the theatre looks more real than the real.

Messel’s most famous production was The Sleeping Beauty designed for the Sadler’s Wells (now Royal) Ballet in 1946. Out of a late 19th-century Russian classical ballet, a symbol of Russian opulence and society, Messel created something quintessentially English. The costumes are an extraordinary mix of periods, (Charles I with later overtones of the 18th century) but transmuted into a personal poetic vision about English tradition. It was the right style for the times.

By the 1950s, the work of Messel’s generation had, in its turn, become over-familiar and outworn. His designs were denounced as tawdry and contrived, the theatre of his day as shallow and middle class, and audiences who applauded his work as ignorant and escapist. Messel’s style had no affinity with the fashionable ‘kitchen sink drama’ of the 1950s, which ironically demanded a return to designs of almost photographic realism. By the early 1960s, he had given up stage design and taken up architecture in the West Indies.