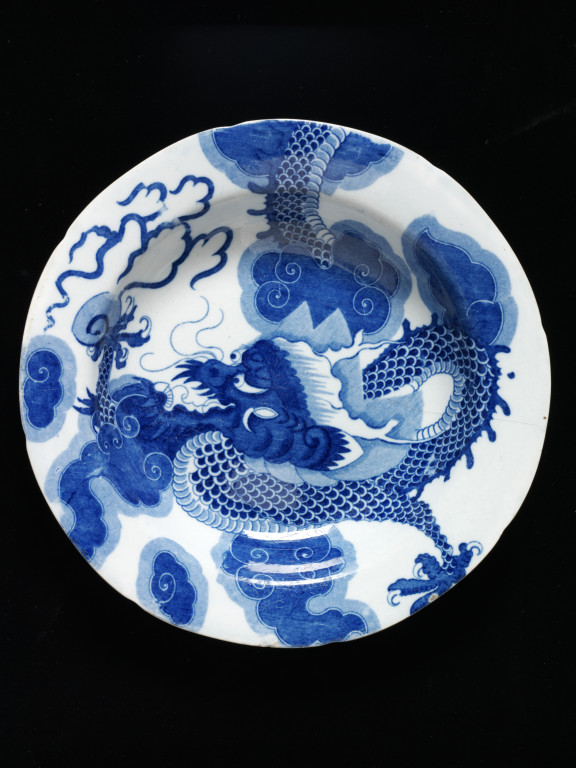 This is one of the most striking pieces of ceramics that will be in the forthcoming V&A display Blue and White: British Printed Ceramics

The dragon on this earthenware soup plate appears to be swirling in the air ferociously grasping a flaming shell-like object in its claws. It is highly unlikely the decorator of this object knew that the image depicts the Chinese legend of the Dragon pursuing the ‘Flaming Pearl’ representing wisdom, enlightenment and spiritual essence.  That is because this soup plate is British, probably made in Staffordshire, about 1810-20. The design for the bowl is based on a type of  hand-painted blue-and-white porcelain that was widely exported from China to Asia and Europe in the 17th and 18th centuries, as you can see with the following example made in Jingdezhen, 1700-1710.

Popularity of these export wares continued into the 19th century when British production of printed blue and white ceramics drew inspiration from the Asian patterns. On both these plates the decoration of the dragon among the clouds continues over the rim of both the dishes. But the British engraver of the pattern again clearly did not understand exactly what they were copying as you can see a pseudo Chinese mark on the back.

As the photograph below shows, this soup plate was not the only British imitation of the Chinese originals. The Bow porcelain factory copied these designs in the 18th century with hand-painted decoration as on the large mug.

The Spode factory in the 19th century also printed similar designs but sometimes failed to get the composition quite right, so the head of the dragon on the cup and saucer appears to be missing!

Blue and white has become one of the most popular colour combinations in history. This classic colour palette originated in Asian ceramics in the 9th century. These ceramics...