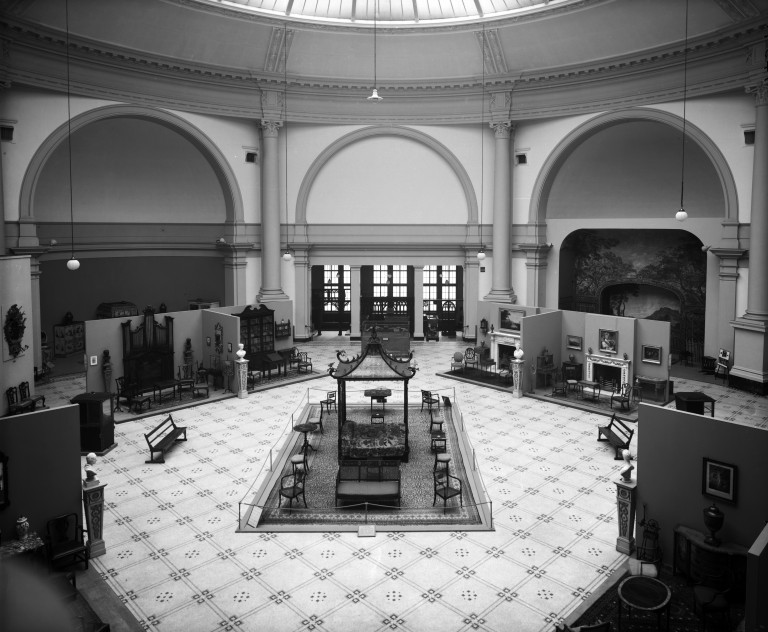 …no, it`s not the main entrance, this is Gallery 40, without the Mezzanine floor, and not a costume in site. It was known at the time as The Octagon Court, Furniture Displays Gallery, each period displayed in its own separate bays in groups of four around the area, complete with a set of furniture. Two examples appearing below of English Furniture, 1785 – 95 & 1750 – 60.

The Guard Book archive (MA/32), together with the Museum Archive (MA/22) are valuable photographic records & research tools into the museums history & environments, with views of Gallery Spaces, Exhibitions & Activities.

The current set of scanned Guard Books, cover the years 1928 to 1950, showing examples of areas of the museum, styles of displays & exhibitions, and how some activities changed during this period.

The two examples below are of an Exhibition of Posters in 1931, and of British Film Art in 1948.

The Museum is constantly in the process of looking at and changing its visual brand and identity, as it has done in the past, for example with changes in lettering styles for signs & other branding.

The example below is lettering for The V&A Picture Book No. 32, in December 1932.

…and in 1950 the designs for lettering for use in the museum was released, not only for picture books, but also for room signage & general use.

The displays themselves can sometimes vary, but usually they are standard cases that have been used for many years, an example below being The Nicholas Hilliard & The Elizabethans (no, not a 1960s band, the artist…) Exhibition..

Compare this to a  rather strange exhibition display of English Pottery Old & New, held in August 1935, in the North Court, that looks very similar to a shop, with some of the objects not in any cases at all.

Conventional display cabinets were used, such as the Circulation Department display cases of 1940, below, which were still being used in the late 1990s and beyond.

…and in 1949, a new set of display cases, were displayed in their own right, in three, and two side versions.

…which are seen here below, still in use in Gallery 43 in Late 2001, before the installation of the V&A Shop.

Large items, such as 5 Adelphi Terrace ceiling where photographed in situ before their accession as object.

On the left below, is how it looks now, in all its glory, but seen on the right as it was in 1936 when it was acquired, the panels are all overpainted..

Other larger items, outside the museum, but not part of the collection, usually rooms, panelling or ceilings were photographed in their entirety before being dismantled or destroyed, an example appearing below.

There were also displays photographed off site, with particular reference to the Circulation department`s Education and Activity displays at Leicester Square Station in 1939.

…and maybe more poignantly, Harrods Shop Window displays, photographed in August 1939, before the lights went out for the years of the War…

And Finally…. the Staff of the Museum are also (very) important, whether its loading an LNER goods van at the works entrance in April 1939.

….Curators like Mr.Edwards & Mr.James, discussing items in The Hatton Garden Room, in December 1934, (hope that`s not an object he is sitting on…)

…and of course not to be forgotten, the young lady who sneaks out to wear the collection on occasions….

….they all show a little bit of how it was then….!