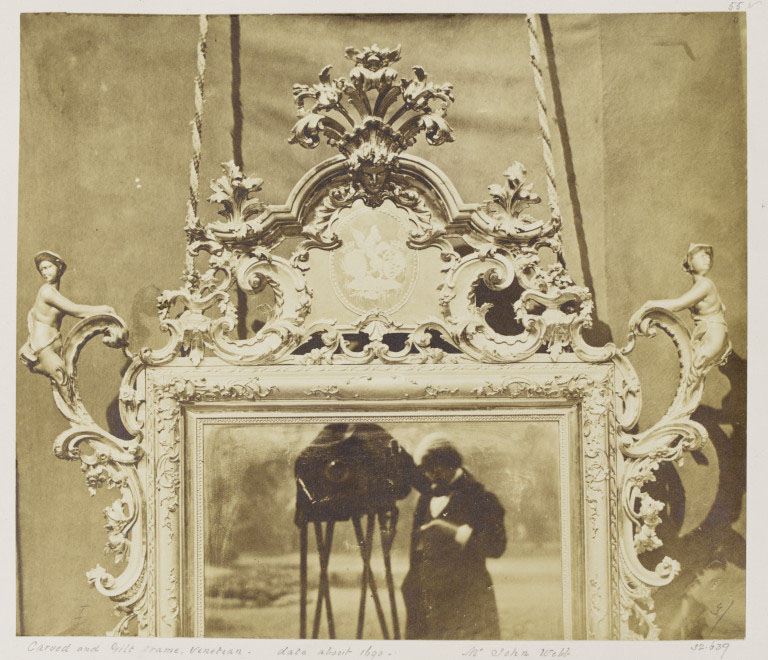 Seeing Other Things in an Object.

The V&A recently had an exhibition in the Photography Gallery – The Camera Exposed, where every photograph had an image of least one camera, either as deliberate portraits, snapshots, collages, shadows & reflections.

Probably the most famous in the Guard Books are early photographs of Mirror Frames by Charles Thurston Thompson, copies of which became Photographs Department collection items in their own right,

The original is a Guard Book print – Negative Number 55.

Another example is print No.61, with the camera on its own, a copy of which also became an object in its own right, with the accession number 32657.

It seems however that this practice of photographing mirrors hadn’t changed very much, for in 1928 over 70 years later, another mirror appears in the Guard Books, with a camera on a stand clearly visible.

A Reflection in objects is sometimes not planned, but part of the techniques available at the time, an example of a guard book, was exhibited, showing objects, a jug and a set of spoons which have reflections of the camera in the object.

Another example of reflections in spoons in detail are below, photographed in 1894, loaned by Samuel Montague MP;

The lighting of Shiny Things, has always been a problem, the reflections of lights and backgrounds has always been with us, but sometimes they can prove to have an insight into where and how an item was photographed.

If you look in the centre of this decorative plate from photograph 67453, also possibly photographed by Thompson, you can see clearly the glass roof lights above;

Ceramics for example can sometimes have a reflection of the room the item was photographed, mainly owing to their shapes, this glass bottle from Persia, has the room clearly visible in the reflection.

….and it also happened in groups. All the jugs in this image below, have a reflection.. of windows and the table they are on….