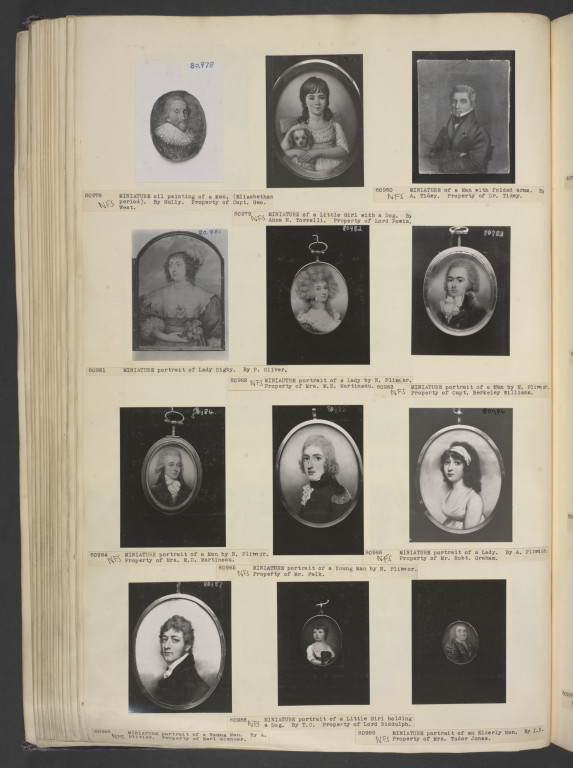 This digitisation project is providing a unique opportunity for various areas of research about the museums collections, the history of the building, exhibitions, activities, and items that were here for a short period of time for displays, or appraisals, and those that left the building never to be seen again, with examples in this blog, of objects covered by the current sequence of the Guard Books that are digitised dated between 1930 to 1950. The History of the building & other areas of interest will appear in future blogs.

In terms of the collections in the museum, they can prove a valuable resource in terms of not only how an item was photographed, but also it`s condition.

Objects, such as the sculpture above, were photographed in the same year as their accession, in this case, in 1949, and have never been photographed since, enabling comparisons with the condition of the object then & now.

However, some of the museums larger items are stored elsewhere, and are possibly in pieces, so the Guard Book photograph may be the only image of the object seen in its entirety.

For example the Screen photographed in separate parts in storage in 2013, was photographed complete and with a detail, in 1948, whilst on display at the museum.

These are invaluable resources in the process of construction, conservation and historical references. Other examples are the objects below that are in off-site storage, which, having no other photograph, the Guard Book Prints are the only visual reference.

During this time, as now, a considerable number of objects were loans to the museum, used, as they are today, as part of a particular exhibition, and were photographed for reference purposes.  At this time we also see a number of items, mainly portrait miniatures,  being submitted for appraisal or value. The owners of these may have changed over the years, but the provenance of the object may be of use to the V&A, current owners, art establishments or auction houses for research. The Guard Books are the only source of this information.

Through this process, some of these loans eventually became part of the V&A Museum`s collection. The example (below) are a set of portrait miniatures from the 1930s from the collection of Frederic Wallop.

This collection was then given to his nephew Alan Evans, which in turn became the Evans Collection eventually in 1994. These were confirmed that they are part of that collection, by checking the labels of the miniatures in the Guard Books against the description on the Collections Management System, and once again, some of these photographs are the only images of the miniature.

Other items from external institutions also appear, for example the Royal Barge was photographed here in 1938, probably due to its size, in the North or South Court, we don`t know for sure as the background of the negative was photo-opaqued, so it appears white when printed.

Another object that appears in the Guard Book is The Brand Cabinet, a companion to our own Walpole Cabinet. This was originally owned in the 1930s by Francis Harper, now owned by The Art Institute of Chicago, it was photographed here at the V&A, also in 1938. A link to the cabinet`s current location in Chicago is below.

As the more of the Guard Book archive is digitised more examples of these various changes of status may be uncovered.

We see also at the beginning of World War II, conservation photography starting as part of the Guard Book records, first appearing with the removal of The Raphael Cartoons in January 1941, as during their removal, detailed photographs of their condition were taken.

Also, unfortunately, during the lifetime of an object, damage may occur during to fragility or accident, poor restoration and other circumstance can mean that a reference image from the past can be compared against a newer image, or the objects current condition, and if an object has been photographed at various times since its accession, comparisons can be made in these changes, which can be assessed for reference & research purposes.

Below is an image of a Donatello terracotta relief, photographed for its display in the Medieval & Renaissance Galleries in December 2008, compared with a detail taken in 1948, which, during restoration work in the late 1970s, was discovered to have been restored with plaster, so changes of this nature are an invaluable resource about the objects condition, its conservation record and  for historical reference.

Another example is a print photographed in 2012, compared to the same print in 1949, were damage has happened between this period.

Some Guard Book photograph copies were also sent to, and then accessioned by the Photographs section in the Word & Image Department and are now objects in their own right, the last one noted in 1934, with an example below from 1932, a print of which was accessioned in 1934.

And Finally, to coin a phrase, I did mention the wonderful name of Mr.Frederic Wallop, who was the original owner of the Evans Collection. There is below another set of miniatures that were sent for appraisal to the museum in 1939 with the names of the owners seen in the labels, including Earl Spencer, Lady Digby & Robert Graham.

…but there are others spread across many photographs, that also submitted their wares for loan or assessment, with wonderful names, such as Albert Trowel, Mr.Fitchett, Miss Bullock, Miss Bunt, Lady Vyvyan, Minto Wilson, St.Andrew by the Wardrobe, The Agenda Club, Lt.Colonel Wingfield Digby, Kurt Titcher, Percy Webster & Sybil Pye, names which could grace any novel of Agatha Christie, the endings of which, as we know, after lots of investigations, and research, could all could be asked to meet in the Gamble Room after dinner…..!