These two young ladies came to visit the Science laboratory at the V&A a few days ago. They are normally on display in our portrait miniatures galleries, but they took a few days off so that I could have a good look at them.

The two portrait miniatures are only a few centimetres tall, and were painted in 1590 by Isaac Oliver, a wonderfully accomplished miniaturist active in England during the second part of the reign of Elizabeth I, and onwards into the reign of James I. Many miniatures by Oliver have visited the V&A Science Section over the years, and since the early 2000s we have been building up our knowledge about his preferred materials and methods.

We don’t know much about the girls, but it seems reasonable to suggest that they are sisters: they do share a family resemblance! The inscriptions reveal that one girl was 4, and the other 5, when they were painted. 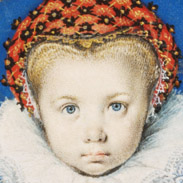 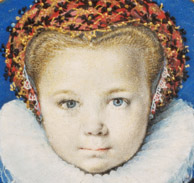 At first glance they do look identical, but when you check closely there are many differences: the younger girl is quite serious and is holding an apple, the older girl has a subtle smile and is holding a carnation. The dresses and cauls (headdresses) are matching but not identical, and the ruffs follow different patterns.

One of our objectives was to see if the pigment mixtures used were comparable in both miniatures, and to increase our knowledge of Oliver’s painting technique and preferences. We only used non-destructive scientific techniques: we were able to view the individual particles within the pigment mixtures, analyse them, and find out what they were made of. And all of this without even touching the miniatures!

There are some interesting differences in the way pigments were used on both girls: This tells us that Oliver did not tackle this particular assignment using a ‘conveyor belt’ approach. Keep your eyes peeled for the full results of this analysis, which will be published soon.